The Many Meanings of Shangri la China

The Many Meanings of Shangri la China

Before coming to Southwest China, my sister and I were out one night with some of her Singapore friends and they wanted to know where we were going on our pending trip to Yunnan China. We rattled off a few places includingÂ  Shangri-la. There was an immediate ooooohh around the room as someone started talking about how lovely Shangri-la was; such wonderful food, great service, nice spa, comfortable beds and the list went on. I immediately realized that they we had a big disconnect.Â  Then it hit me, they thought we meant the Shangri la Hotel, but we were talking about the actual town of Shangri laÂ  in Southwest China which certainly wasn’t luxury!

The Many Meanings of Shangri La

Shangri la is often associated with a utopia; a remote beautiful, imaginary place where life approaches perfection. Clearly this is why the hotel chain took on the name – it sounds pretty great doesn’t it?

Shangri-laâs association with utopia began when James Hilton described a fictional town in his novel Lost Horizon. In the book, Shangri-la is a mystical, harmonious valley, enclosed in the western end of the Kunlun Mountains. It has since become synonymous with any earthly paradise (hence the 5 star hotel chain) a mythical Himalayan utopia â a land of permanently happy people isolated from the outside world.

One would think that since the book was fiction and presumably Shangri-la was also fictional, that this would be the end of the storyâ¦but not quite. As human beings, I think we have to grasp on to the idea that a perfect place exists. Therefore, many real places try to claim that they are the ârealâ Shangri la and capitalize on tourism and capitalism; the very thing that would kill a true utopia. But I digress.

The Chinese government also wanted to get in on this potential tourist money maker and officially renamed Zhongdian County in northwestern Yunnan to Shangri-la County.

Is Shangri la China or Zhongdian a real utopia?Â  I was going to find out!

We traveled by car into the county they now call Shangi-la. We climbed high into the mountains (10,500 feet) and popped out in this lush, yet cold, valley dotted with villages and fields of yaks. This was my first yak sighting â signaling that I was entering the Himalayas and area near Tibet. This is an area where bovines needed to grow more hair to survive the harsh weather. A yak is not a buffalo or a cowâ¦it canât even moo, it grunts instead â living in the harsh mountain conditions staying warm with their coats of long hair. The further you go into the cold region, the longer hair they have â adapting to their surroundings. 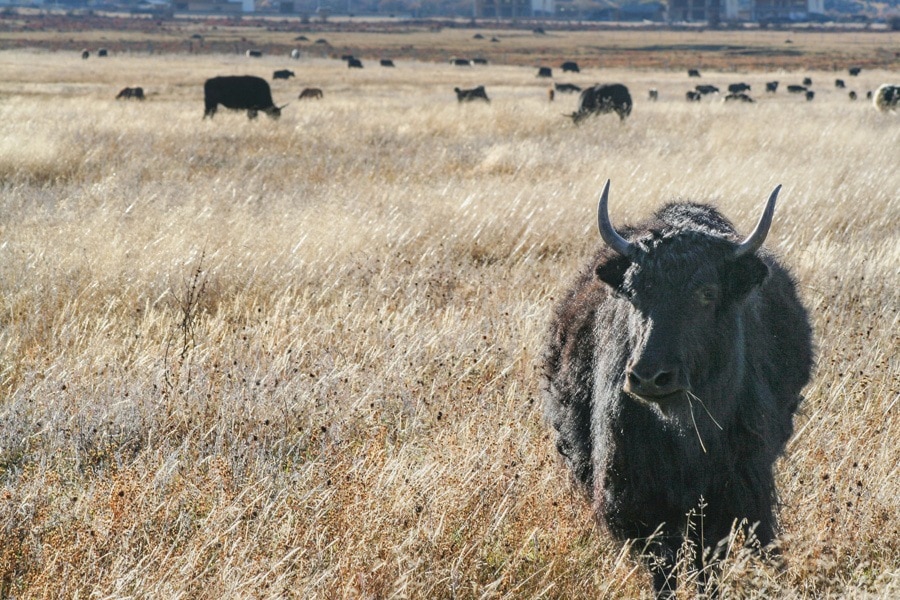 Yaks in the fields near Shangri la

Yaks are the main source of meat for Tibetans and this part of China â as well as a source of milk. Yes â I did eat yak meat as well as have the famous yak milk tea that is served in this region. Yak milk tea is a main staple of the Tibetan diet made of yak butter, black tea, and salt. I can safely say that the yak tastes like beef and the yak milk tea tastes like melted butterâ¦.and yak intestine tastes like a rubber hose.

We came across a heard of yak along the side of the road and I asked for our driver to stop so I could take some photos before the sun set. I watched the yak herders round up the yaks from the field (I have no idea how they figured out which ones were theirs), and walk them across the road stopping a bus in its tracks. The yaks stood in tall fields of golden grass reminding me of Kansas or somewhere in the Midwest of the US.Â  But I wasn’t in Kansas any longer, I was in Shangri la.

As we entered the town of Shangri la â I have to admit, it didnât seem like anything special or any more different that the other Yunnan towns we had stayed in. Granted, there were yaks roaming the streets as if they were cows in India, and it was veryÂ  cold â but other than that â it was the same tourist store shit.

After eating our yak hot pot dinner and having a few beers to wash it down, our guide suggested we walk to the town square to watch dancing.Â  I wasnât necessarily expecting to see a bunch of Tibetans in leisure suits âstayin aliveâ, but one could hope. Instead it was circles of Tibetan and some mixed in tourists dancing around the square in a âline danceâ style. The movement of the hands and arms were much more complex and there was a bunch of hopping involved.

Huddling around the coal warmth in the hotel

Since I was ‘high’ on yakâ¦I decided to try and join them. Plus the alternative was to stand around and freeze â so movement sounded like the best option. I tried to pick an older local lady who looked graceful to follow along and mimic.Â  I was pretty pathetic and 4 steps behind the group most times, but I was getting warmer.Â  I also served as entertainment to the locals.Â  We went back to our chilly hotel and tried to stay warm in a common area huddling around a pot of coal for heat. We sat around the table and played cards, sipping tea before we went to our very cold rooms. 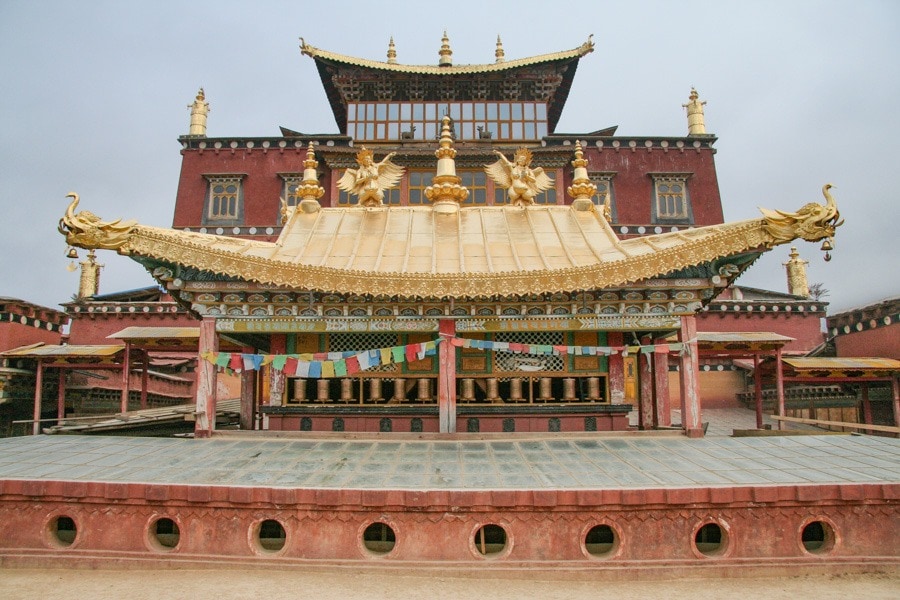 We started off very early the next morning to see the Tibetan Buddhist Monastery named Songzanlin. This was the largest Tibetan Buddhist monastery in Yunnan and one of the most famous in the region. The monastery was constructed in 1679 and looks like a Kasbah; houses stacked on top of each other on a hillside. Approximately 700 monks live in those houses in this monastery community.

The halls were colorful and ornate and the Buddha statues were enormous! We turned the prayer wheels, and went to the roof to look around at the view. When we came back down in the hall there were some monks that had arrived to chant.Â  It was a loud, guttural sound, like grunts ringing out through the halls; a bit shocking at first.

I bought a sandalwood bracelet from the monks and continued poking around the monastery most of the morning watching monks go about their daily chores.Â  It was a really beautiful sight to see and experience the stillness (and coldness) of the morning in Songzanlin before too many tourists arrived.

I get the feeling that there was more to see in this Shangri laâ¦but we ran out of time and needed to be moving along to higher and even colder ground. It was a perfectly nice town, full of ethnicity, culture, and old world charm. But utopiaâ¦â¦..weeelllllâ¦Iâm not so sure about that.

Personally, Iâve been to many âShangri laâsâ during my travels â for me itâs a state of mind â finding the untouched, and simple lives, the co-existence of many religions and cultures â feeling remote. Iâm happy to say that you can find little pockets of that all over the world!

4 Responses to "The Many Meanings of Shangri la China"