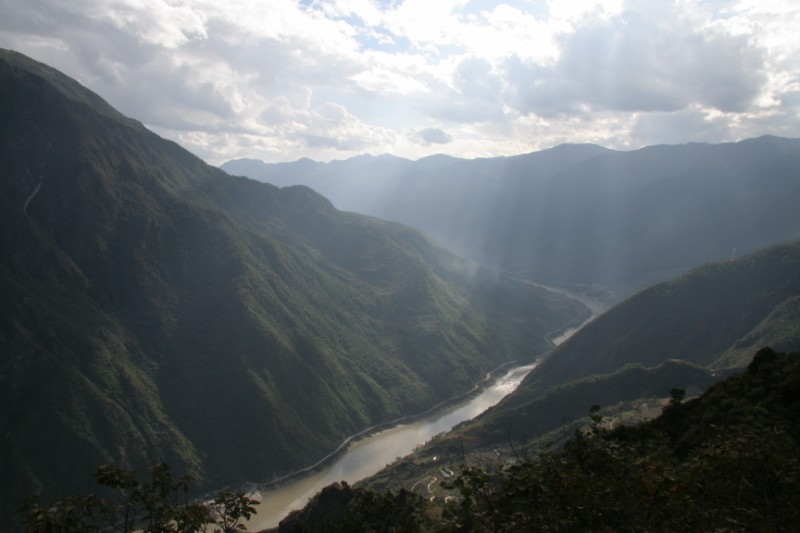 For the ‘best of’ Yunnan, China Photography – click here!

For all snapshots of the Tiger Leaping Gorge hike – click here!

One of the main reasons why Cyndi and I decided to come to Yunnan was to hike in the Tiger Leaping Gorge â a deep canyon on the Yangtze River. It is actually one of the deepest river canyons in the world. It received its unique name from an ancient story about a tiger who was running from a hunter and leaped over the gorge (and presumably to his freedom) at the gorgeâs narrowest point (about 25 meters wide).

The 15 km trail is full of ups and downs and local village life (a.k.a. people and goats). We started the two day hike by making a very important decision â hiring a horse to carry our bags. We couldnât leave our travel bags in the car for two days â so Cyndi and I decided to split the cost of a horse to carry our 27 kg of luggage for two daysâ¦we arenât wimps, and we arenât stupid. I watched as they strapped up my backpack carrying my most prized possession, my laptop, to a horse that I hope and prayed was nimble footed. Carrying daypacks our group took off up the ridge of the gorge. Immediately you were struck by awesome views as we climbed higher and higher. The horses were always in front of us, you knew this by the pleasant jingle of their bells. Yet I was a bit fearful that I would hear one of those nice bells roll down the side of the gorge.

We stopped at a very small village with a hostel that served lunch. It was a good break as we were quickly approaching the dreaded bends. We sat and had a very tasty lunch and had a short rest. Julia â our German traveler convinced us to have beer at lunchâ¦I wasnât too sure if that was a good idea as the afternoon climb was killer â but she mixed it with Red Bull and it was a strange upper and downer in one drink. As we looked around the outdoor establishment, we posed for pictures by the wall of corn. I told Cyndi that we had to have a picture so I could send it into our Nebraska Alumni Association and see if they would publish it in their next monthly magazine with a title of âWhere are they now? Two alumni sisters – jobless and hanging out in corn.â We also noticed that the eating establishment had another fine vegetation growing in addition to cornâ¦hash. There was a large plant of wild marijuana growing in the courtyard. Apparently this area is known for itâs wild marijuana and âhappyâ pancakes. No wonder why it was a popular trek among backpackers!

/>After lunch, lit up on Red Bull and Beer, we took off up the most strenuous part of the trailâ¦the 28 bends. A bend is simply a switchback on a mountain trail â normally used to ease the steepness of a climb. A long, slow, painful trek up the pass â back and forth for hours. After about bend # 14, I started to slow down considerably â sucking in the thing altitude mountain air. I caught up with Julia who was taking a break (I guess the beer and red bull didnât work too well for her either), and she had just at that moment figured out what a bend was! Halfway through the bends and then she understood the meaningâ¦what a great follower!

Pretty soon I heard the horse bells stopped. I was a bit worried at first, thinking maybe one of the horses took a stumble over the side â yet I didnât hear any fleating horse bell go by me. Instead â I realized the horses had stopped for a rest as they had reached the topâ¦yippee â no more bends!!

As I rounded the last bend there was a lady at the top welcoming me and pointing for me to go out on a ledge to see the gorge-ous view. As I happily went that direction, the lady stopped me and told me that I would have to pay 5 yuan to go see the gorge-ous view. I stopped â wait a minute â why do I have to pay to look at a view and take pictures on a trail? This is certainly not the thing you want to hear after you just huffed and puffed your way up 28 bends! I went out onto the overlook area anyway â trying to ignore the lady and her absurd rules. We took pictures and had to start Had to pay for photo at the top â the lady claimed the top of the gorge somehow. As Cyndi and I were leaving she stopped us and demanded money â we were both extremely annoyed with this greedy way to make moey. However Cyndi stopped and paid her 10 yuan for both of us and yelled at her saying if she ever came to our country that she would have to pay us if she went to the grand canyon or even looked at the statue of liberty! I cracked up at this comment â but it was a good description of the absurdity of the charge. I much rather would have had her just beg for the money than demand it for looking at a view.

We started a bit of a wet descent through a heavily wooded area and a nice path. As we came to a small clearing â we all noticed a miracleâ¦a beautiful double rainbow on the other side of the gorge. We all stopped and watched them grow brighter and brighter for a while, until we started to get chilled and had to move along. We got into our hostel/camp for the night right before sunset. This camp had a nice courtyard area, plenty of beer, and milk tea â we were set. It was a bit chilly up at this camp â so they set out pales of burning coal to help warm our common areas. That night Cyndi and I taught the Canadians, the German, a Chinese guide and the Aussie how to play card games. This was the beginning of a card game marathon for the next few days. Our game was so loud and boisterous the horse guys even had to come inside and see what we were playing!

After a good nights sleep and many pancakes (no happy ones â yet there were ones with âdried mintâ that was a bit suspicious), we took off to finish our trek the next day.

We stopped at more villages again for tea and beer and tried to soak in the last of the remaining views. Our trail the last day followed the ridge line , narrow and rocky, passing through waterfalls and herds of goats. One group of goats were precariously balancing on a steep rockface â which made my fondly remember my Moroccan goats who climb the trees. I must admit â I even stopped and talked to these ridge goats â telling them about their amazing Moroccan cousins. They werenât nearly as impressed about it as I was.

One of the many things that I enjoyed about this trek was the fact that you trekked through villages and everyday life on the side of a mountain. We came across farmers, families, herders, rock quary workers, goats, and cows. We came across one family with 3 generations working in a field hoeing away. It was all very simple – reminding me that life doesn’t need to be complicated to be happy.

The day was long and hot, but eventually we made it down in time for lunch and a frightful drive back through the gorge with rockslides everywhere. I think I felt safer hiking the trail as opposed to driving through the area! Regardless â it was all well worth it to see the Gorge-ous views!!!

Now that you’ve chosen a hike, you need to know what gear to take with you! Don’t leave on your hike without these https://www.ottsworld.com/blogs/essential-hiking-gear/
Back to Blog

One Response to "Tiger Leaping Gorgeâous!!!"