I cringe when I hear the speaker crackle and pop as a high-pitched voice blares through the square in Xiâan. The speaker should have probably been retired 10 years ago, but it lives on and no one seems to care that itâs past its prime. I try to listen through the crackling and come to the conclusion that Mandarin sung is just as confusing as listening to it spoken. A group of retirees (all women) are lined up in front of the old speaker square dancing on the new side of the city wall in Xiâan. While on the other side of the 40 foot high city wall in the old part of the city is another group of people lined up doing movements in unison. They follow the lead of a trainer as he shouts out stretching instructions as they prepare for a group run. There is no music and the average age of the group is probably 23 years old. New city, old people and old city young people; Iâm amused by Chinaâs intersection of elderly and young. 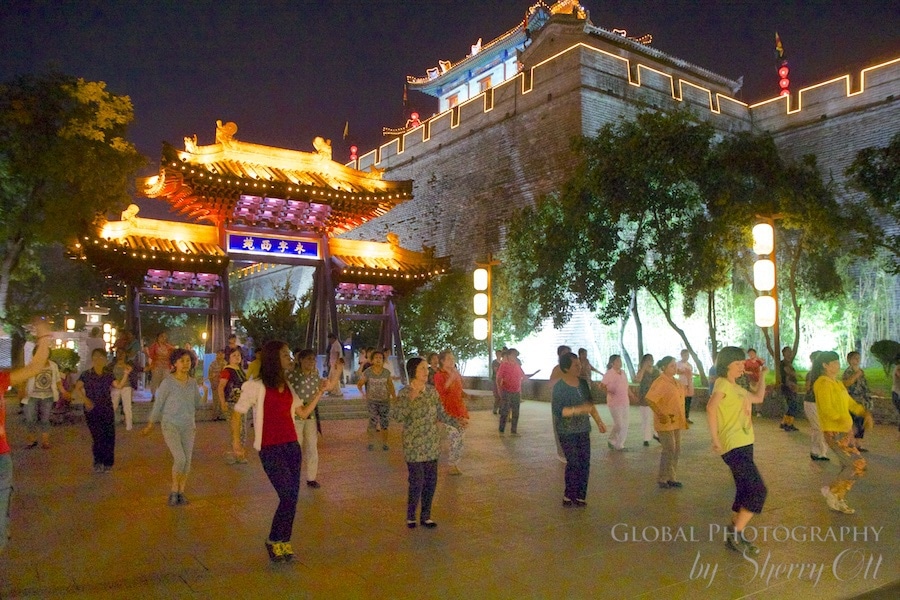 What to Expect When Traveling to China

Elderly/Young, Ancient/Modern, Old/New; China lives in this world of opposites. China is considered one of the ancient civilizations along with Egypt, Babylon, and India. Itâs a culture that dates back 4,000 years and itâs years of traditions are now clashing up against the modern world and an economy growing at a rapid rate. Itâs a petri dish of old and new intermixing, elders and hipsters co-mingling, braided together in a complex waltzing partnership; one in which you never quite know who is going to take the lead.

Of course you expect the world famous sites stand out when traveling to China; the Terracotta Warriors, the Great Wall, the architecture of Shanghai, and you canât overlook the billions of people. However, what I was fixated on was the relation between old culture and new, as well as the growing generation gap. That was the lens I viewed the famous cities and sites of China through on my recent week-long trip to Shanghai, Beijing, and Xiâan.

Searching for Old in Shanghai Markets

When I walked to the Bund district to view the sleek skyline from the river, the first thing I saw was an old barge chugging down the river in front of skyscrapers. As the old barge made itâs way down the empty river, I had to wade through throngs of people. The Bund is the most touristed area in Shanghai as people come to take the iconic shot of the modern Shanghai skyline. I think the barge was making more progress then me! We left the skyline behind and my guide, Ling, led me to a pedestrian shopping street. Apple, TopShop, H&M, Starbucks â everywhere I looked there were brands I recognized; this is the new China. Then we did a little time travel to Nanshi Old Town on a street surrounded by old buildings painted in red with traditional Chinese rooflines. However, donât let the term âold townâ fool you, its faÃ§ade is old, but itâs goods are new. Bins of selfie sticks and the latest craze of plastic flower sprouts (what?) that people wear in their hair were found at every shop and vendor. Nestled among the latest fads though were a few old items; I was entranced by the old Chinese comic books. And by old, I mean the 1980âs old.

Old is the New Cool in Beijing Hutongs

Beijingâs culture was built in the hutongs, old courtyards forming tightknit neighborhoods where you find day-to-day life. Not many hutongs remain these days as most have been leveled to make room for the new China. However, ironically more tourists visit the few remaining hutongs rather than the new modern buildings! It was my walk through the South Gong and Drum Lane hutong that made me love Beijing. I meandered through the narrow streets and alleys and got a feel for the old life of Beijing. I was even able to enter one of the homes and eat lunch with a local family. The mother entertained us with music (and her bling skeleton shoes) while the father cooked up a feast.

I became distracted looking down every little lane; finding old men playing Mahjong, watching neighbors converse, or an older woman carry her bags from the market. But the part I loved the most is that nestled among the old connected homes, public restrooms, and men playing Mahjong, was young men and women with tattoos and piercings sipping coffee in small, hip coffee shops. This was the ultimate mix of old and new in Beijing. I stopped in at Si if Bar on Nanluogu Alley, which labeled itself the âfirst bar in the hutongâ. It was an oasis of calm during the day with itâs clever wood design, bar dog that would lay by your feet, and its self proclaimed âF!*cking Good Coffeeâ; I sort of felt like I was in Brooklyn. This mixing of old neighborhoods and young hipsters was exciting to experience; the hutongs were my favorite place to visit in Beijing, and I actually skipped the more ancient popular sites just to stay there longer to just wander around.

Xi’an A City Divided by Old and New

The city of Xiâan oozes ancient tradition; itâs one of the most important cities in Chinese history as the home of 13 dynasties and the starting point to the Silk Road. Today it holds one of the most famous archeological finds in the world, the Terracotta Warriors, but I had already seen the warriors 9 years earlier , and instead was more interested in experiencing the day to day life in the ancient city.

Xiâanâs Old City Wall stands 40 feet tall and 40 feet wide; a giant square running 8.5 miles around the old city. It was originally built to protect the city and Dynasty from invasion, however it was never actually attacked. Maybe the look of it was enough to scare enemies away. Today the wall is a division of old and new. Inside sits the old city and Muslim quarter (my favorite part of the city), bell towers, and parks. Itâs strangely quiet on the inside of the old wall as a new law only allows electric motorbikes and vehicles within the city walls. While outside the wall is a bustling metropolis of new buildings, high-rises, and loud traffic! Go up on the wall to walk or bike the 8.5 miles and itâs a great way to place you between the old and new China.

Steps leading up to the wall

Outside the wall the new city bustles

Getting Off the Beaten Path in China

It had been 9 years since I had last been to China, and I found that not much had changed in the way of tourism in the last 9 years. For some reason I still found it challenging to get off the tourist trail and really find the true, new China. In each of the cities I visited, itâs easy to find the typical tour routes and guides tend to focus on the older, ancient sites of China. I had to work harder to find the newer more local parts of these cities. However it just takes a simple request to your young guide, and theyâll be happy to take you off the tourist trail and introduce you to todayâs ânewâ China.

I was a guest of Wendy Wu Tours and USTOA on this trip to China, however all opinions expressed here are my own.