One of the most rewarding types of travel and writing I do is traveling with my nieces as part of the Niece Project. Itâs not simply about building important relationships with my nieces or being a travel mentor to them; itâs about inspiring other Aunts and Uncles to do the same. Every year that I write another segment of the niece project I hear from more and more Aunts and Uncles who are planning so start their own Niece/Nephew Project. I jump for joy every time I hear news like this!

I want to continue to inspire others to travel with kids who arenât their own and be travel mentors, so I decided to start taking guest posts about other Niece/Nephew Projects! Youâll hear their stories, tips, ups and downs.

As my husband and I prepare to take his 15-year-old half-sister halfway around the world on her first trip out of the country using her first passport, I meditate on the profound way this old Chinese proverb can apply to travel.

My husband, âSpankyââa nickname given to my childhood-chubby, ringleader by his uncleâand I have been wandering since 2009 when we quit our jobs and sold our house and 80 acres in northeast Washington State to travel around the world for seven months. After that first trip, it was all overâwe didnât stand a chance against the travel bug. We had the fever, the itch to keep going and never stop, but we also had to make money to fund our new habit, so we hit the road in a fifth wheel and have been working hard and playing harder for the past six years.

But enough about us. During my fact-finding, pre-trip mission I stumbled upon Meet Plan Go and its co-founder Sherry Ott. My girl crush on Sherry began and I clicked the Like, Follow and Stalker buttons on every site where I could find her. One day I ran across a post talking about something she called the #NieceProject. I get goose bumps now, just thinking of the beautiful gift that was born that day. Immediately, I told my husband, who continually surprises me with his extreme and whimsical generosity. To my surprise (but not really at all), he said, âLetâs do it.â Like Sherry, we donât have kids of our own, but we are passionate about travel and love our family dearly, though we are often far from them. Someday we might have kids of our own, but that didnât stop us from dreaming big in the present moment and committing this year to take Spankyâs half-sister, half-brother and our two nephews on a world trip to anywhere their little tween hearts would desire once they hit the pubescent ages of 15.

We pulled up the snowy drive of my in-lawâs 40-acre property, a ranch of sorts, with dogs, hogs, chickens, bunnies, horses, goats and steer. Spanky and I were giddy, but my teeth chattered, not from the freezing temperature, but instead in anticipation. Would my husbandâs 15-year-old half sister, Amy, even want to go anywhere with us? I mean, I think weâre pretty damn cool, but she might not feel comfortable flying to some foreign country with two people she sees only on major holidays. Last time we saw her she was probably six inches shorter. We walked into the house amazed to see a full-blown teenager with her long, straightened golden locks, Cabelaâs hooded sweatshirt and blinged out country girl jeans.

Spanky and I sat on the couch, staring down two bull elk mounted on the wall as we B.S.âed with my in-laws and waited for the right moment to present Amy with her Christmas/birthday/lifetime gift to end all gifts. We had purchased her a book from Lonely Planet and I made a blank plane ticket replica, which I placed in the front of the book. Finally, the moment came and I handed her the book wrapped in a big gold bow. She flipped through it, seeming interested, but a little underwhelmed to have received a book for Christmas. Because her parents already knew the surprise (we made sure to get permission to take their children on a far-flung trip out of the country), Amyâs mom prompted her to look toward the front of the book.

âWhat is it?â she prodded.

Amy grabbed the ticket, puzzled, not understanding why her motherâs voice had reached a new octave. After a few more seconds of awkward silence, her mom urged her again until finally blurting out, âItâs a trip to anywhere in the world you want to go!â

My husband and I held our breath as we waited for her reaction, and then she did something we didnât expect out of this tough and tumble small town tween: She burst into tears. Happy tears. Phew. I went over and gave my half-sister-in-law the biggest hug Iâve ever given her. She squeezed me back with a new twinkle in her eyes and smiled a smile I will forever hold in my heart.

The countdown is on. Amyâs got her passport and has a heavy-duty pair of binoculars packed for her trip to (drumroll, please) Africa! We leave May 24! Because of her love for animalsânot only is Amy an avid hunter and fisher, but she has raised her own animals, including a prize hog nearly every year, through 4-H, and she wants to be a veterinary technician somedayâshe decided on a safari. My husband and I took it from there, landing on an eight-day tour with G Adventures through Zambia, Botswana and Namibia. Spanky and I have never been to Africa, so not knowing what to expect and having the added precious cargo of his fatherâs only daughter, we decided on a tour. Not only does it make everyone in the family feel an added level of safety, but it also makes our lives easier by not having to plan every little detail. Instead, we can leave it in the equipped hands of the travel pros; not to mention, we got a killer deal, having booked during the holidays when the package was 15 percent off. Score. We were pleasantly surprised to find out later that Botswana had been named Lonely Planetâs 2016 Destination of the Year, so hopefully weâll beat the mad rush, too. 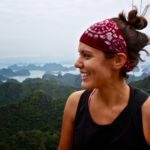 Sarah Reijonen quit her job and sold her home and 80 acres in northeast Washington in 2009 to travel the world with her husband, âSpanky,â for seven months. Upon returning, Sarah and Spanky decided to go nomadic and have now lived in an RV for the better part of six years. The pair travels California for work, and when they arenât working hard, theyâre playing hard: globetrotting, hiking, gold prospecting, you name it. You can follow Sarahâs adventures at www.sarahreijonen.com, on Instagram @countrygrlswrld and Facebook at www.facebook.com/countrygrlswrld. Be sure to check out her travel memoir, Country Girl: Letting Love and Wanderlust Take the Reins on Amazon.

Would you like to share your Niece or Nephew Project story on Ottsworld to inspire others?Â  Email me at [email protected] and pitch me your story!

3 Responses to "Sharing the Gift of Travel"