A Mosque of Grand Proportions 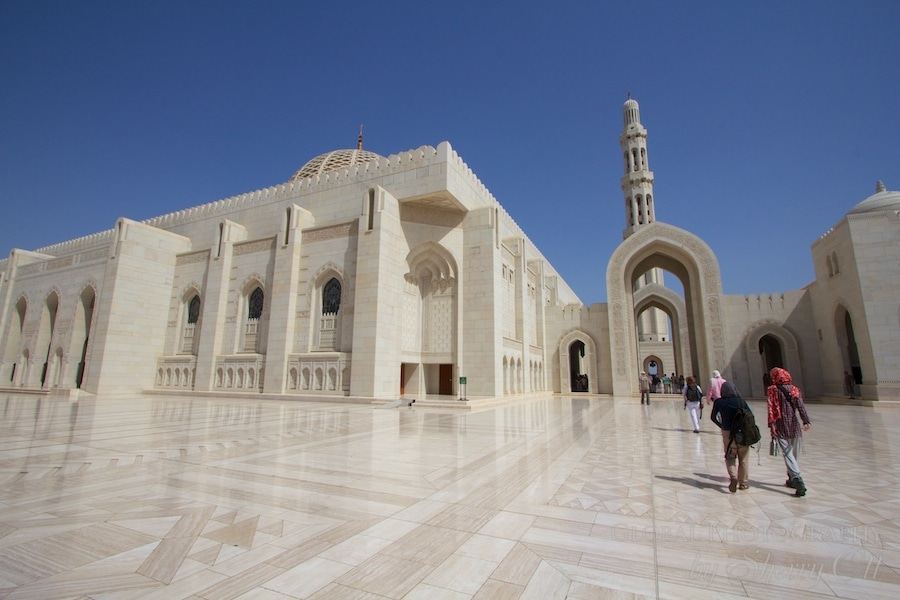 The shiny marble of the Grand Mosque in Muscat

I stood staring upwards at the chandelier in the dome of the Saltan Qaboos Grand Mosque in Muscat Oman admiring its soft glow. I was slightly surprised that it gets the dubious title of 2nd largest chandelier in the world. It didnât seem that large to me, but as our guide Rob was pumping out the impressive numbers it dawned on me that it didnât appear that large since the whole prayer hall structure it was housed in was massive. Proportions can be deceiving in a mosque that is littered with superlatives â the largest, biggest, most, prettiest are commen words you hear when researching the mosque which was completed in 2001.

The mosqueâs total capacity is 20,000 visitors/worshipers â larger in size than many of the cities in Oman. The dome rises 164 feet above the floor and the chandelier illuminates a space of 46,000 square feet below. No wonder Iâm having trouble deciphering the sizes â everything is huge.

I visited the Grand Mosque in Muscat as part of my Exodus Hiking Trip in Oman. Walking into the main prayer hall is breathtaking thanks to the chandelier made of Swarovski crystals with a diameter of 26 feet. But the hall is also graced by the worlds 2nd largest handmade Persian rug. The delicate rug took 4 years to produce and weighs in at 21 tons. 600 dedicated women tied 1,700 million knots to create this masterpiece. One of my favorite parts about the rug was the graduated color that it used to mimic the light reflection outward.

After visiting the main prayer hall we also walked through the north and south riwaqs which had a lovely display of tilework. Each niche represented specific themes and styles from the Arab Islamic eras and countries from Spain to Central Asia. I loved walking through this area and trying to guess where the tilework was from since I had visited many of the countries in my past travels. 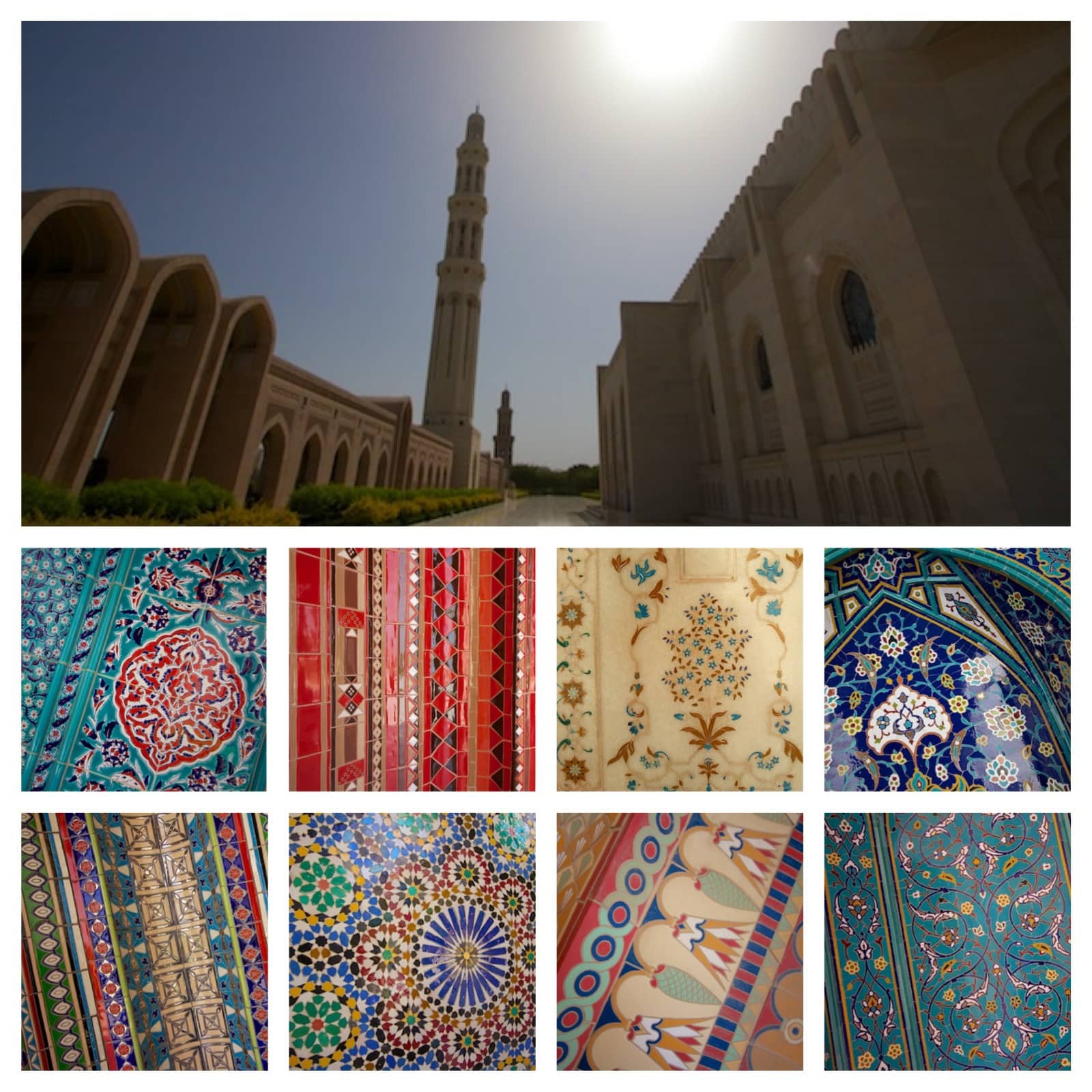 If you are visiting the mosque complex, be sure to stop by the Islamic center and share some Arabic coffee and dates with the women there. They welcome everyone into comfortable rooms for a refreshing snack and conversation about Oman, Islam, Womenâs roles in Islam, and Arabic culture in general. This is your chance to ask anything youâd like about Islam and the Qur’an. I really enjoyed my time talking to the women there as talking in person to people and educating yourself beyond what you see in the news is always the first step to understanding another culture. 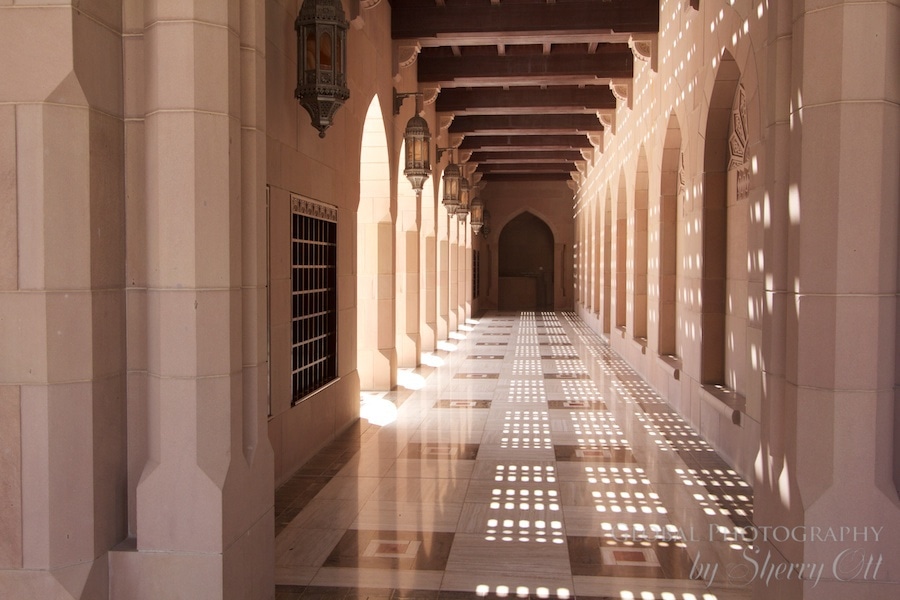 A Shade pattern falls on one of the rawiqs 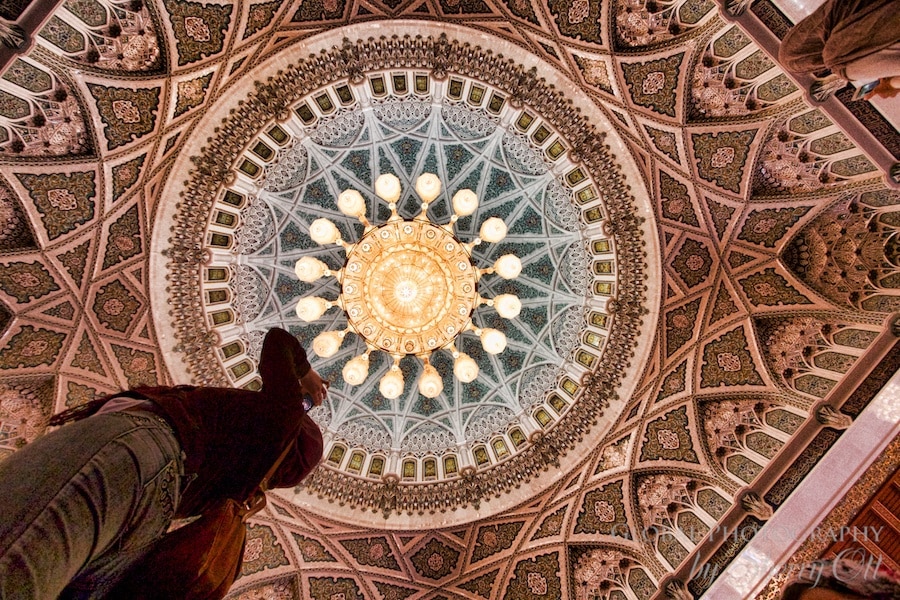 A visitor takes a photo of the record breaking chandelier 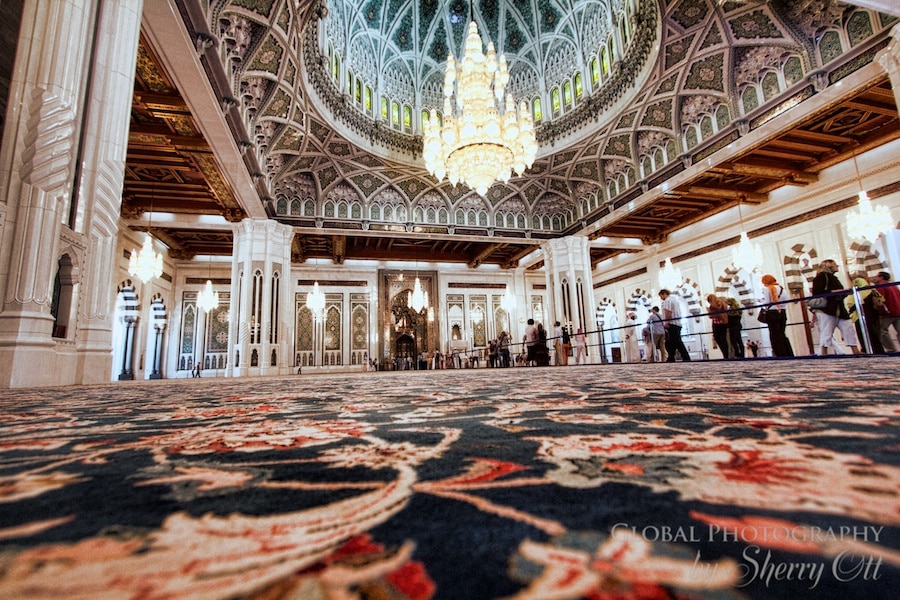 The prayer hall of the Grand Mosque 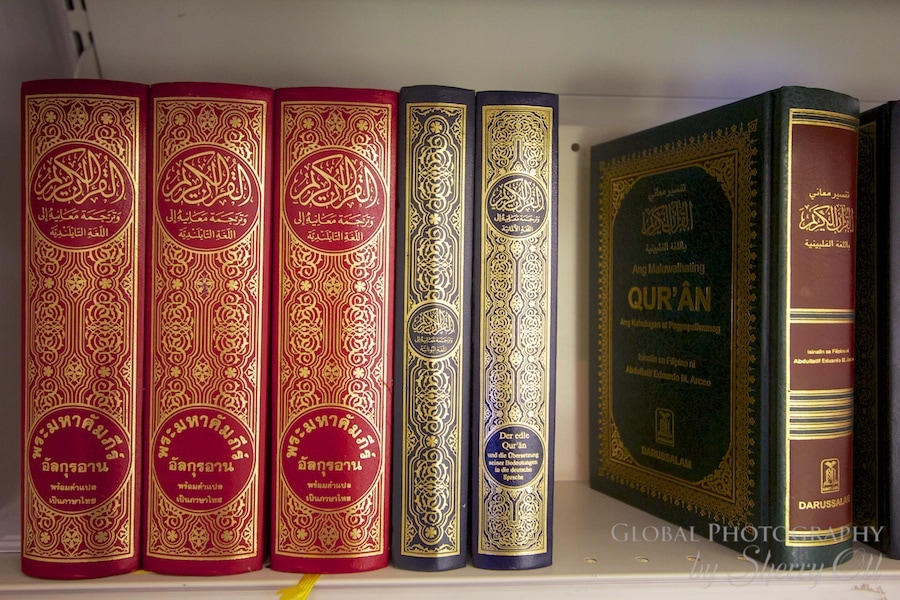 Qur’an on display in the Islam Center 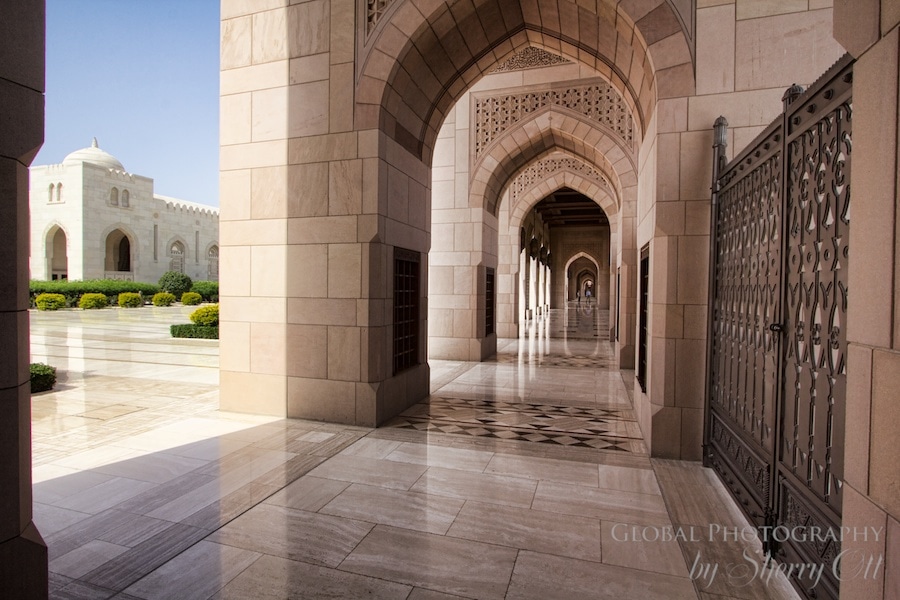 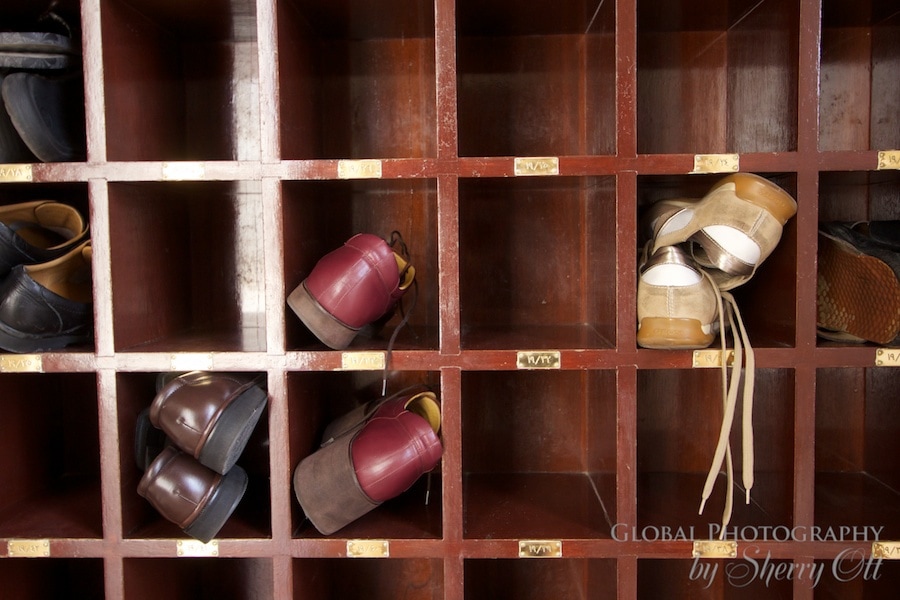 Shoes storage – shoes must be removed while visiting the prayer hall 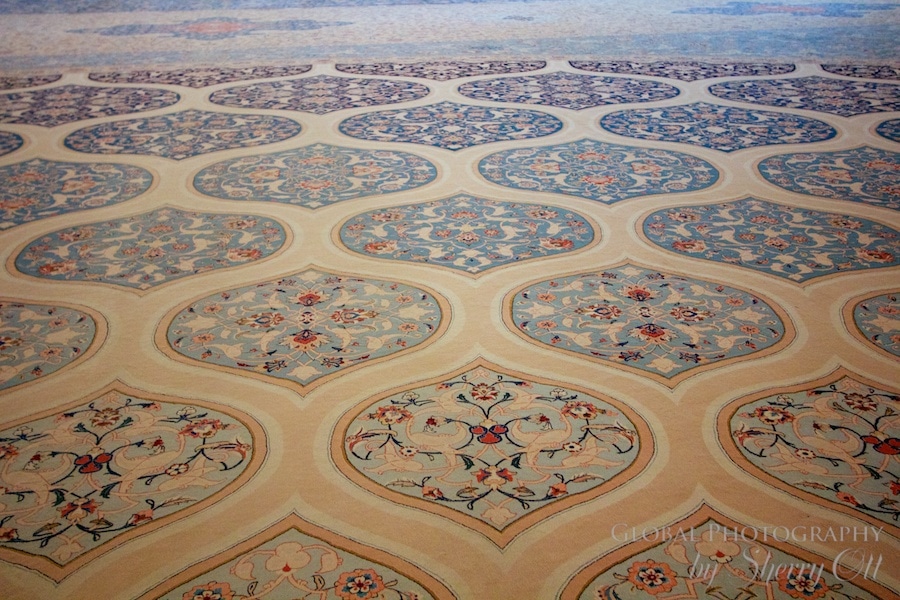 The hand made Persian carpet – notice how the color changes as it goes outward. 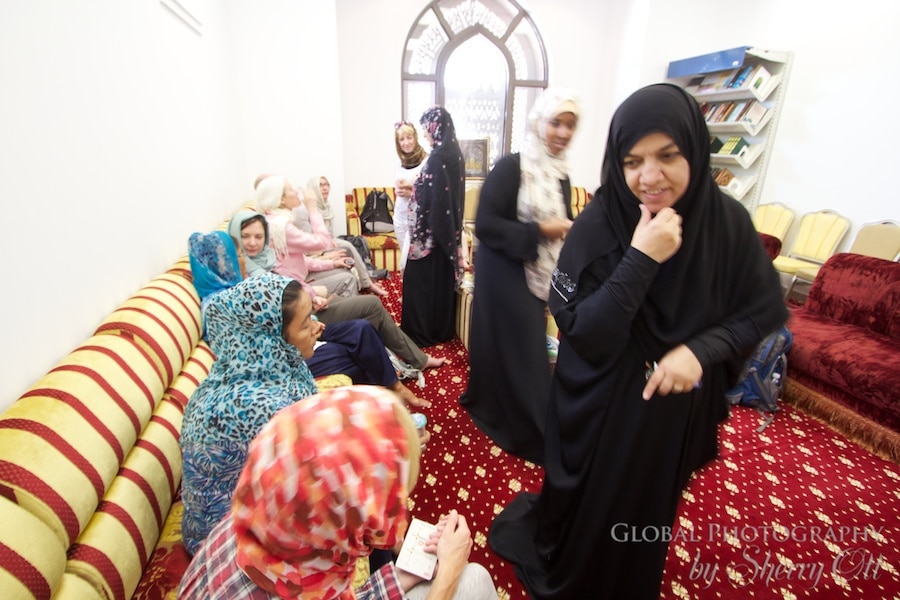 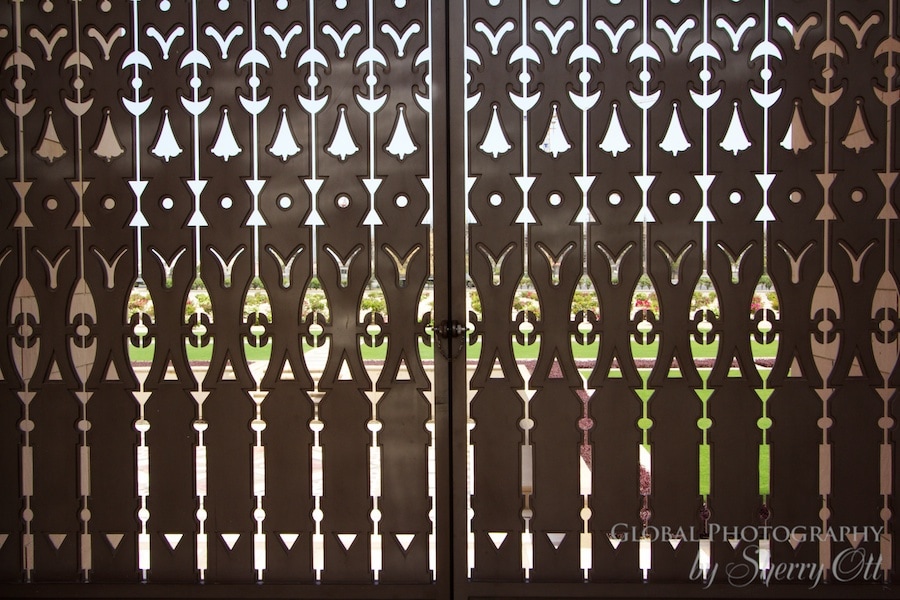 A gate around the mosque grounds 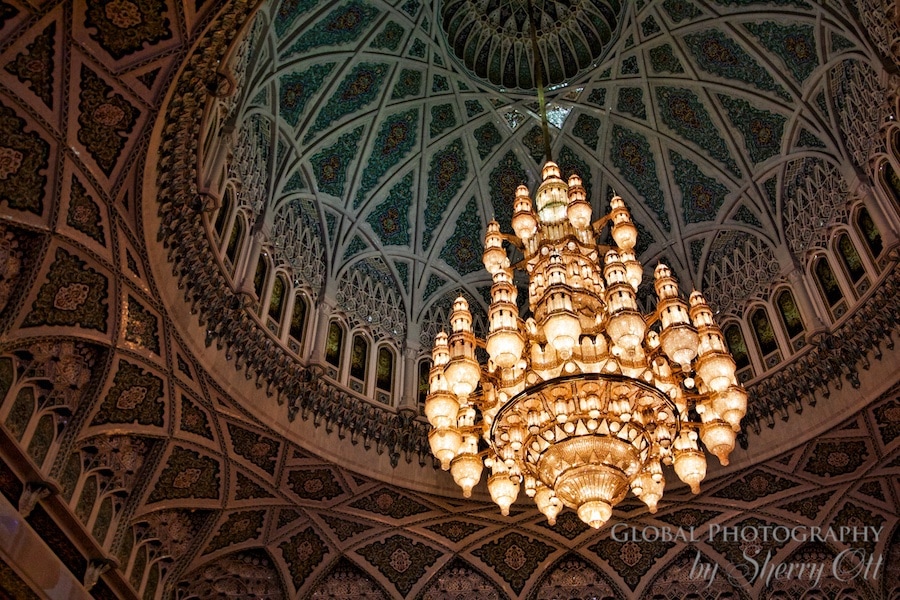 The 2nd largest chandelier looks deceivingly small thanks to the proportion of the building.

View all of my Sultan Qaboos Grand Mosque photography here

More Info:
Website: Grand Mosque
Non-Muslims are allowed to visit the mosque every day, except Friday, from 8:30 until 11:00 am. Visitors are asked to dress modestly and in a way befitting places of worship. Women are also required to cover their hair.

Disclosure:Â  While in Oman I was a guest of Exodus TravelsÂ  on their Oman Hiking Tour.Â  However, all of the opinions expressed here are my own.

17 Responses to "A Mosque of Grand Proportions"