Rickshaw Run Update From the Road #5

I’m traveling 2,000 miles through India by motorized rickshaw, raising $15,000 for Charity: Water. While I’m sweating buckets, becoming one with my horn, avoiding cows, and getting grease under my nails on the road you can follow along with my Instagram updates.

The coolest seat on the bus in India is hanging off the back apparently. I can sometimes hardly believe how many people they can hang off the back, sides, & top of the buses here. 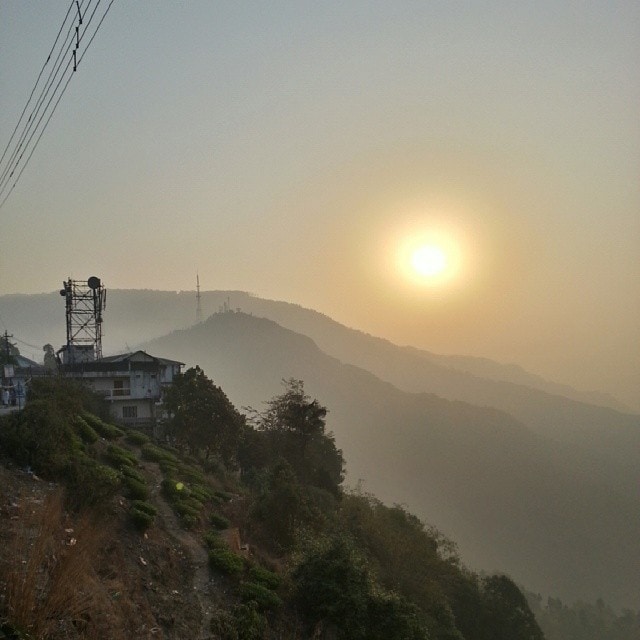 This morning’s sunrise at Kurseong.

Rickshaw Run Update Day 11
After being locked inside our hotel today and having to bang the metal gate for someone to wake up and let us out â we knew it would be a great day. Three minutes after taking off the NYPDâs muffler fell completely off and we spent the morning deafened by their noise and looking for a welder.

Of course an hour after we left the welder our roof rack completely broke and weÂ had to quickly move all of our bags down in the rickshawâ¦so itâs a bit cozy now. But at least we didnât lose anything. Lots of indecision today among the teams â but we finally decided that we had âplenty of timeâ to make it halfway to Darjeeling in the tea region and up the mountains to get a change of scenery.

We are staying at a cool mountain lodge surrounded by tea plantations tonight in Kurseong. However getting up this mountain to over 3000 feet with about 17 switchback turns while climbing on crap roads and dealing with oncoming vehicles was a ridiculous adventure that involved our rickshaw having to get pushed constantly by teammates and locals. Even in 1st gear it didnât have enough power to climb the mountain â I had it full throttle and it would peter out.

Our engine was taking a beating and was completely overheated requiring us to stop frequently to try to cool it down with a spray bottle. Iâve never had such a hard time driving a manual transmission vehicle in my life. I actually gave up once and we asked one of the guys to drive it up â but they couldnât do it either and they had more strength to push â so that left me in the drivers seat. The sun went down and we were climbing/pushing in the dark as we couldnât run the light as it was too much drain on the engine! But after a couple of hours we made it the 12 km to our lodge. Rejoice! 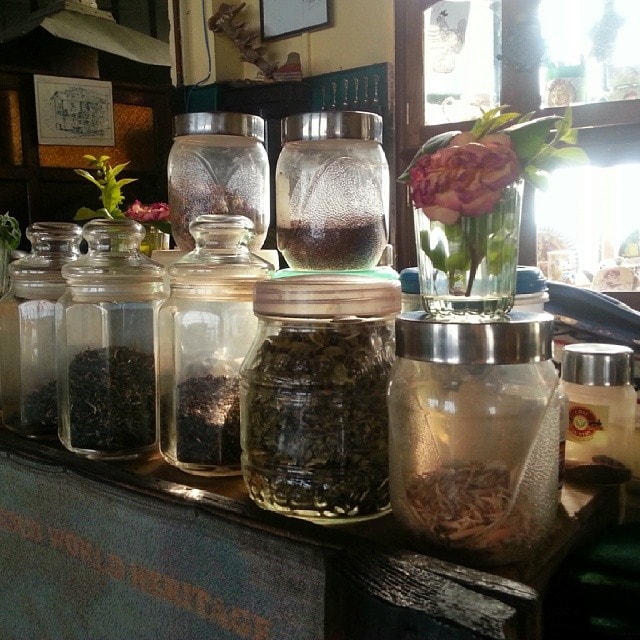 While in Darjeeling region of course we’ll have tea for breakfast! 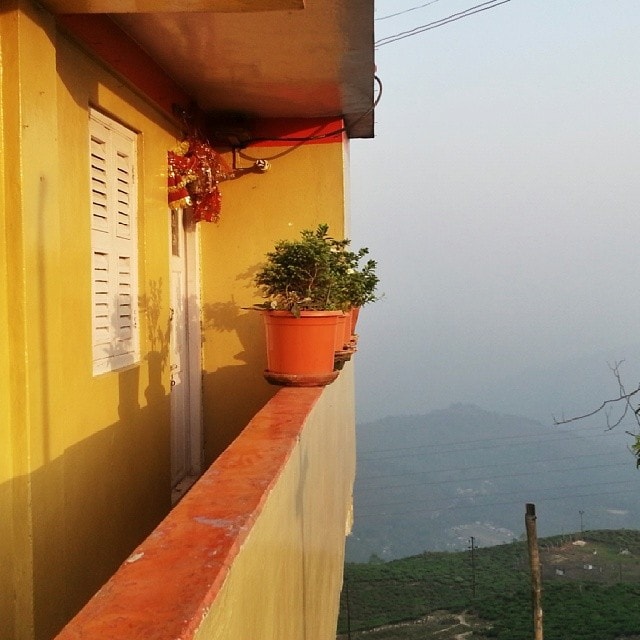 All the little homes in Kurseung are painted in bright colors and have beautiful flower gardens.

Itâs getting near the end and I must admit â Iâm ready for a day where we donât have to drive â itâs been really intense every day and I think when we arrive Iâm just going to sleep for 24 hours. This morning though we did something we never do â we slept in a little bit (until 6AM) and started later so that we could enjoy the mountains a bit and a proper breakfast and tea.

After talking to some of the locals we found out that there was a better road we should have taken up the mountain the night before that was new and wider â of course this was all news to us â so we took that one down the mountain. Regardless, the drive down the mountain was nail biting and we had to stop a few times to cool down our brakes with little spritzer bottles. Then we took off thinking we could cover a lot of ground, but were pretty quickly slowed down due to poor road conditions. Pot holes that swallow a whole rickshaw!

One of our caravan rickshaws had issues again with suspension so we stopped early today to try to get that fixed. Hoping itâs the last fix we needâ¦but somehow I hardly doubt that.

We sang Christmas songs in the rickshaw today to try to get in a cooler state of mindâ¦yes, the fumes have made us delirious. We also just found out that the finish line is at 3000+ feet â which means another fiasco of driving in 1st gear for hours to get up a hill and pushing.

Why does the end have to be so hard?! 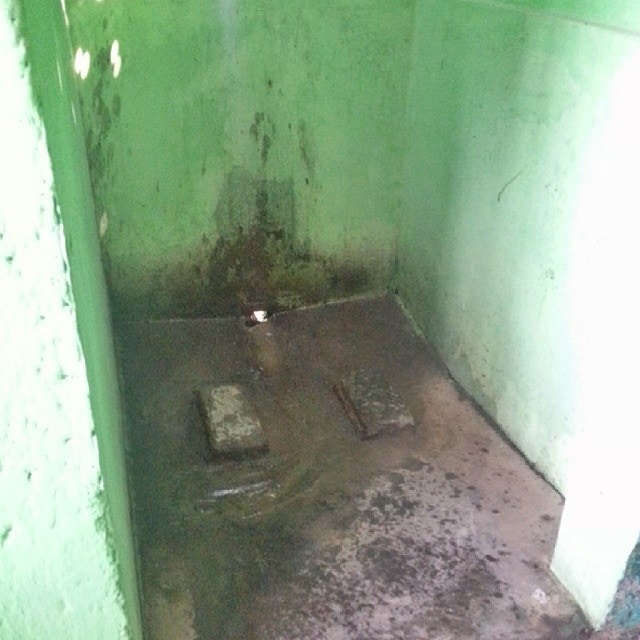 Any guesses on what this is? 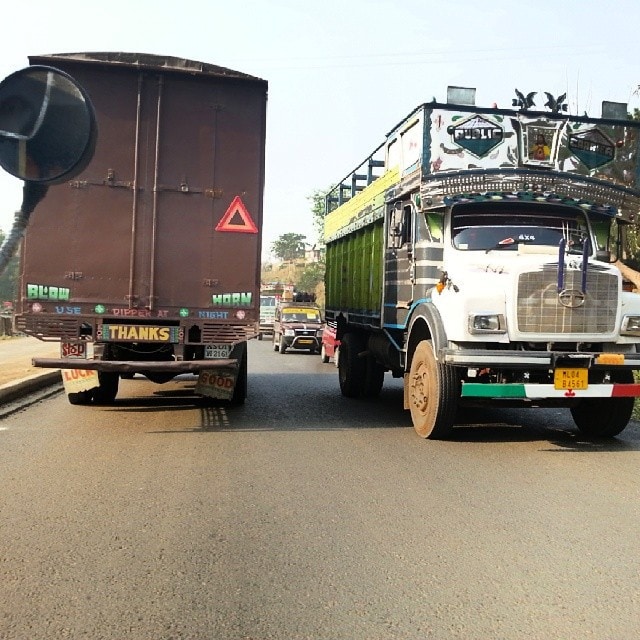 What has two weeks of driving a rickshaw thru India taught me? There is ample space to fit between these trucks and pass. 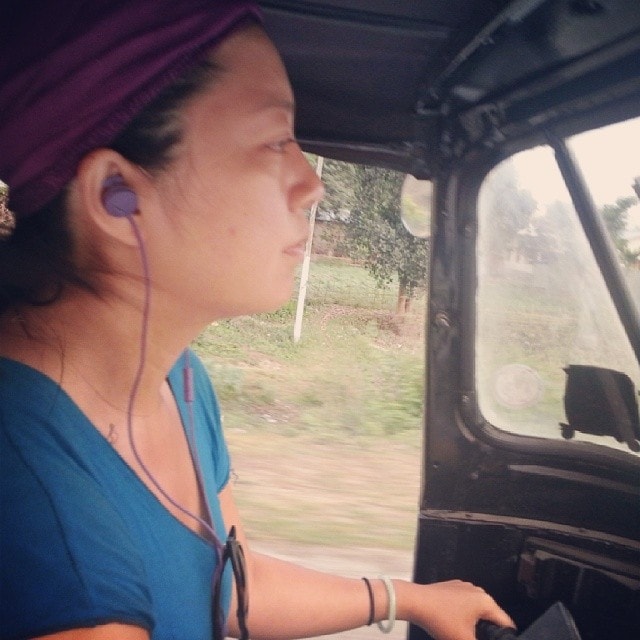 Early 5am start today with Charlie GrossoÂ at the helm. 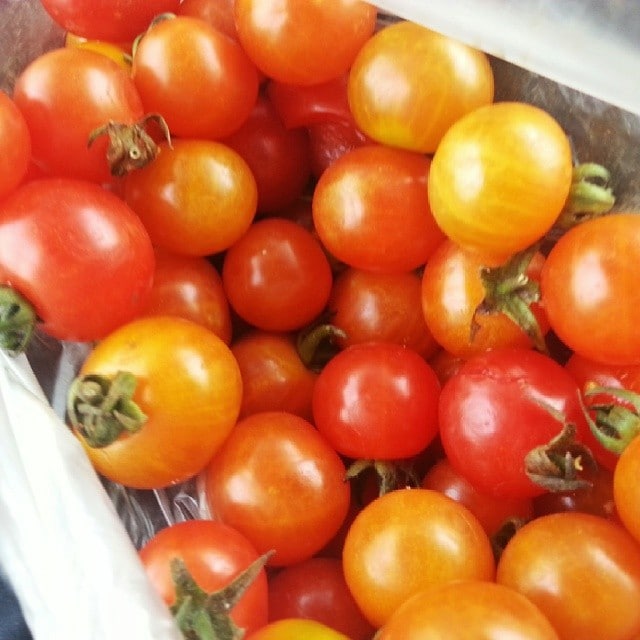 We found a new snack to eat in the Rickshaw – cherry tomatoes found at little roadside market, so sweet!

Team dynamics and decision making is always the most challenging in these types of races and today we had to make a hard team decision. Our convoy of 3 rickshaws, who weâve been with since day 2, got up at 4:30AM, packed up our rickshaws and were on the road at 5AM in an attempt to make it all the way to Shillong tonight. A pretty low probability that it would be possible before nightfall based on the road conditions and distance we had to travel, but we were all willing to try. However as the day burned on and potholes and traffic slowed us down, it was clear that there was no way we were going to make it to Shillong before the sun went down.

We arrived in Guwahati at 3:30 pm with 2 hrs and 30 minutes of sunlight left and only 89 km to go â which would normally be doable. However all of the intel we had received thus far said that the road from Guwahati to Shillong is a mountain climb to 3000+ ft and it would take aprox. 5 to 6 hrs to complete. Charlie and I had a very hard decision to make as if we were to push on to Shillong like the rest of the convoy wanted, then it meant weâd probably be driving until 9PM at night on mountain roads and the finish line would be closed so there wasnât even a possibility of having a finish if we did arrive in Shillong. It would be dark, so we couldnât film or take photos either. The rickshaws had been driven hard all day and needed a rest. So Charlie and I decided to stay in Guwahati on our own and leave the convoy so that we could shoot for a proper finish tomorrow. We deliberated on this for hours between the two of us and then with the convoy, but in the end we knew that weâd have more fun if we did the drive in the morning when we could see, and when we could drive into the finish. So â we are on our own again just like day 1.

It wasnât an easy decision and we have no idea how our Rickshaw will fare up the mountain climb (especially based on our last experience trying to climb a mountain and having the guys have to push it up), but we decided that we would make it work somehow, even if we had to be towed. The finish line is in our sights tomorrow! Our fundraising goals is also in our sights. Fingers crossed it will be a good morning for the two of us and our little rickshaw. 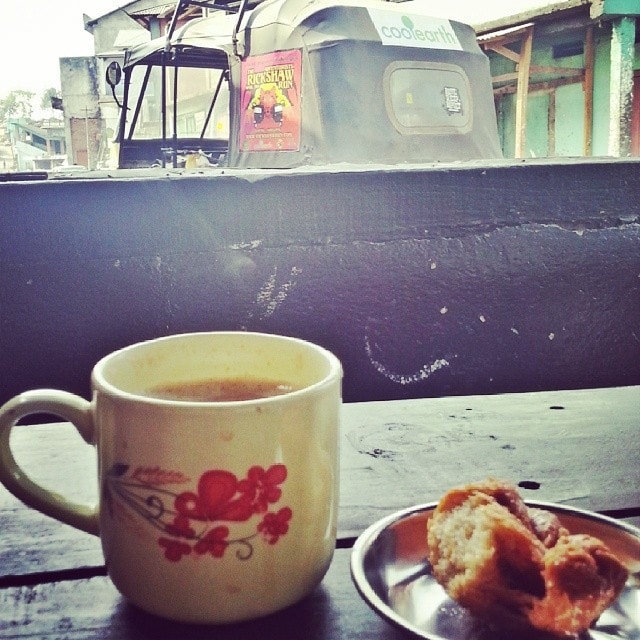 One last chai stop as we head towardsÂ ShillongÂ – only abt 40km away! 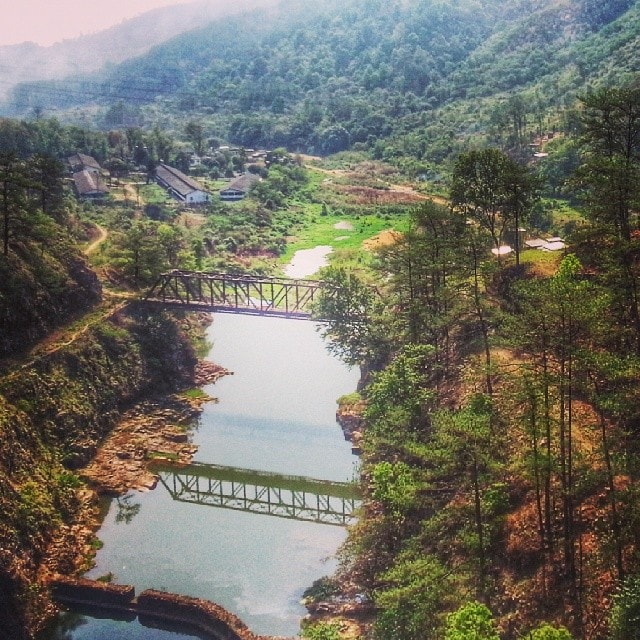 I already love the state of Meghalaya. It’s so nice and green in the hills. Here we were passing over a damn on our way toÂ Shillong. 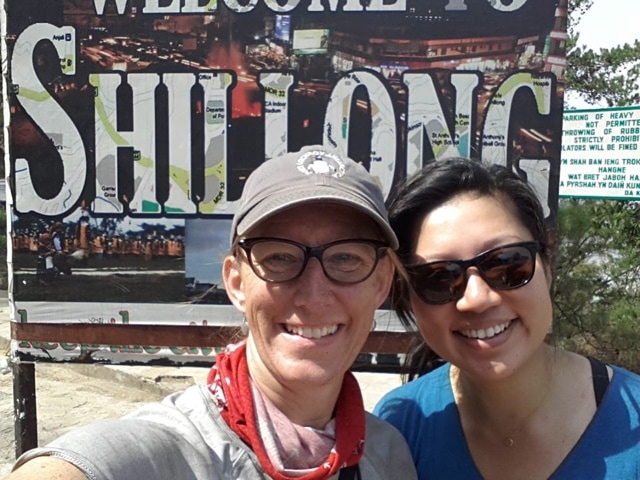 We tried to sleep in a today since we only had 90km to go to the finish line â but both of us were anxious and ended up still waking up at 4:30AM thinking about what was ahead of usâ¦the glorious finish line.

We pack upÂ the shaw one last time and took off at 6:15am on our own. We slowly climbed the mountain roads passing between trucks like pros. Our little rickshaw handles pretty well in the mornings so it did ok on the climb this time and the incline was more gradual which helped tremendously â no pushing required! At the halfway point we stopped for chai and some breakfast and let the shaw cool down, then I took over the last half of the driving.

The scenery in the state of Meghalaya is really the best weâve seen; green trees, lakes and rivers with water in them, and little hillside towns. It is a weird mix of cultures in this part of India â near Burma, Bhutan, and Nepal â peopleâs look and style changes. It doesnât really feel like India. We drove past a beautiful lake and even stopped to take pictures at the âWelcome to Shillongâ sign.

We were entrapped in Shillong city traffic for a while in which I was so anxious to get to the finish line (only 1 km away) that Charlie had to tell me to stop whining! But finally we saw it â the big banner on the left side of the road âFINISHâ The feeling of elation and accomplishment overcame us â we had made it there alive!

We drove 2,300 miles in 14 days the length of India in a 3 wheeled, 7 horsepower rickshaw â insanity. We did this all in temps well over 100 degrees every day and slept an average of 5 Â½ hours of a night. We had 3 major breakdowns, a few minor ones, we hit a gate, rear ended another rickshaw in front of us and I accidently ran over a dogâs tailâ¦but no major accidents.

And the best part â we raised over $15,000 for Charity: Water and $1000 for Cool Earth. All done with a fabulous teammate, Charlie Grosso, who is the only person Iâd ever consider doing this insanity with â sheâs a rock. Mission accomplished. Now itâs time for a few beers and about 24 hours of sleep! 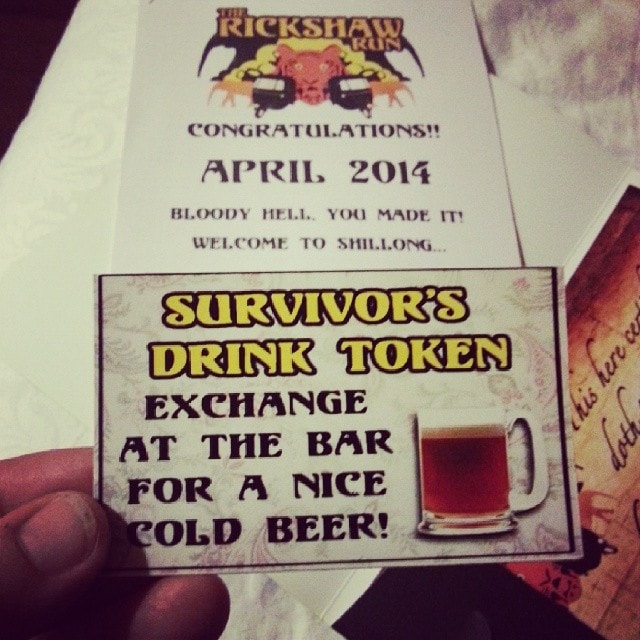 This is my evening plans! 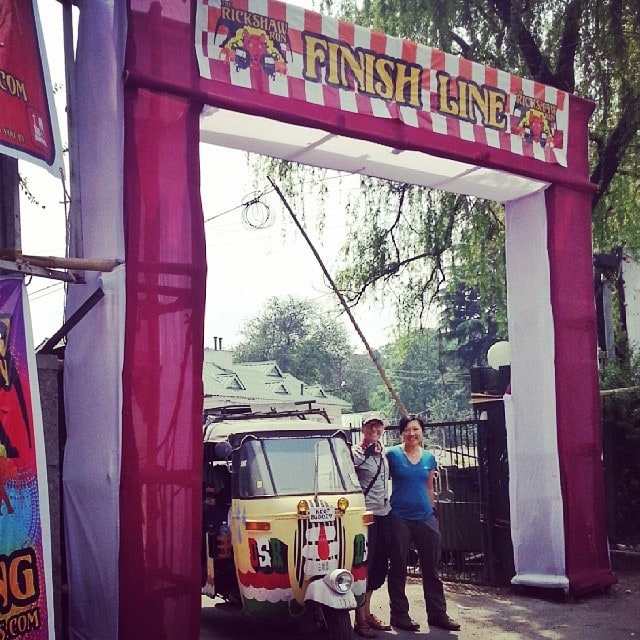 10 Responses to "Rickshaw Run Update From the Road #5"