Overcoming Fear and Getting What you Want 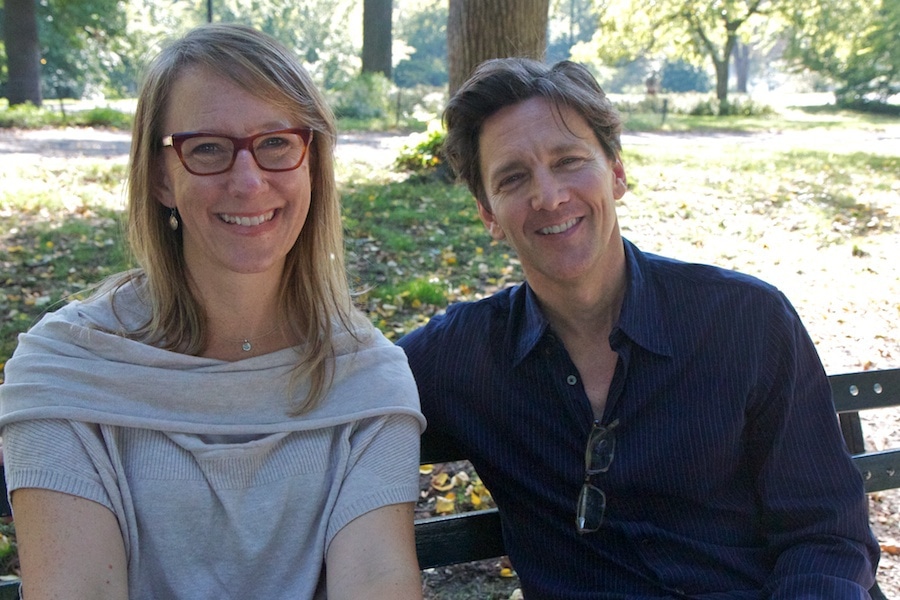 My morning with Andrew McCarthy

Iâm tired of it taunting me â itâs as if Facebook is the wicked witch in Snow White telling me to eat the apple. Just take a bite she saysâ¦.
Facebook has been presenting the apple of Andrew McCarthy to me yet again in the âFriend Suggestionâ column. It always throws me a bit since I donât expect to see my celebrity high school crush (Pretty in Pink, St. Elmos Fire) and famous actor being suggested to lilâ ole me â a regular person from Peoria, IL. But every time Facebook presents the apple, my practical side reminds me it is doing so because of logic â Andrewâs friends list and my friend list has a lot of overlap.

What many people donât know is that this famous Brat Pack star (and heart throb) of my generation and I strangely have moved into the same field â Andrew McCarthy now adds Travel Writer to his list of accomplished jobs. Thanks to that â yes â we have many of the same Facebook friends.

But I wonât bite – no Facebook â I wonât take that apple. As much as my initial instinct is to âfriendâ him becauseâ¦duhâ¦heâs Andrew McCarthy â I decide that Iâm not going to âfriendâ someone who really has no idea who I am and I honestly donât know. After all, I donât need to be a Facebook groupie when Iâm strangely confident that one day our paths will actually cross just because we sort of are in the same industry. I was positive that Iâd be at some event where he would be speaking at some point â I would introduce myself and that would be it â a real in person introduction.

Yet â the apple is damn tempting.

Fast forward to September 2012, I am getting the usual barrage of press releases from agencies that flood my inbox. However amidst all of that a friend had passed along the release information for Andrewâs new book and I immediately pursued the agency â the tables were turned. I really wanted to read his book, as I was fascinated that this man that seemed so untouchable to me growing up somehow ended up in my unlikely profession. Plus â heâs an amazing writer and from reading various articles written by him I knew that we had the same philosophy about travel. In fact â I even went to Vienna because of an article he wrote – now that is effective travel writing.

I get not only one book sent to me â but 10 books. One for each of our Meet Plan Go event cities to give away. After all – our attendee demographic is women who are in their mid to upper 30âsâ¦the generation that remembers Andrew from his teenage heart throb days. The agency happily sends books.

I get the book in the mail, excited to crack it open. But first I read the press kit and thatâs when it comes to me â I wonder if Andrew would come talk at my NYC event? Nah â no way â thatâs just a silly dream. I tuck the thought away deep into the âwishesâ section of my brain that wants, wants, wants but seldom receives. My Andrew McCarthy keynote âwantâ is placed in between âI wish I could write a bookâ and âI wish I knew how to ball room dance.â

But waitâ¦I am the person that says, âfollow your dreamsâ and âif you want something go get itâ. The wish of having Andrew speak at the event wouldnât go away â it stayed active in my brain. Yet it was really one of those ethereal wishes that I could dream about, but never really thought would unfold into reality. Finally one morning in a flash I thought, âif you donât ask for what you want, you will NEVER get it. EVER.â

I sent off the note to Andrewsâs publicist telling them about the event, describing why Andrew would be a good fit to speak at it, and politely asking if he would be interested. I hit âsendâ and immediately felt better. Better because I had tried. I knew the odds were low, but I felt like I had made an important step.

Then the next chain of events I could have never predicted.
His publicist actually answers me back and says, âWill checkâ. The next day I see an email from Andrew sitting in my inbox. My heart jumps from the simple excitement and the strangeness of seeing I had an email from him. It was short and to the point â he was interested.

I replied â however I found that a simple email reply that should take 2 minutes took me 20 minutes as I scrutinized every word, punctuation, and grammar choice making sure that I didnât sound like a silly fan who had pictures of him up on my wall when I was 15. Instead I painstakingly looked at each reply and thought – is this professional, should I use this word, did I thank him, did I thank him too much, did I use too many punctuation marks, do I sound excited enough, do I sound too excited â this was work. A string of emails continued and we realized that unfortunately he had a schedule conflict and couldnât attend â but he offered to help in other ways. Thatâs when one of my Meet Plan Go hosts and friend, Lisa Lubin, suggested that I ask him to do a video interview and we could use it to open all of our events. 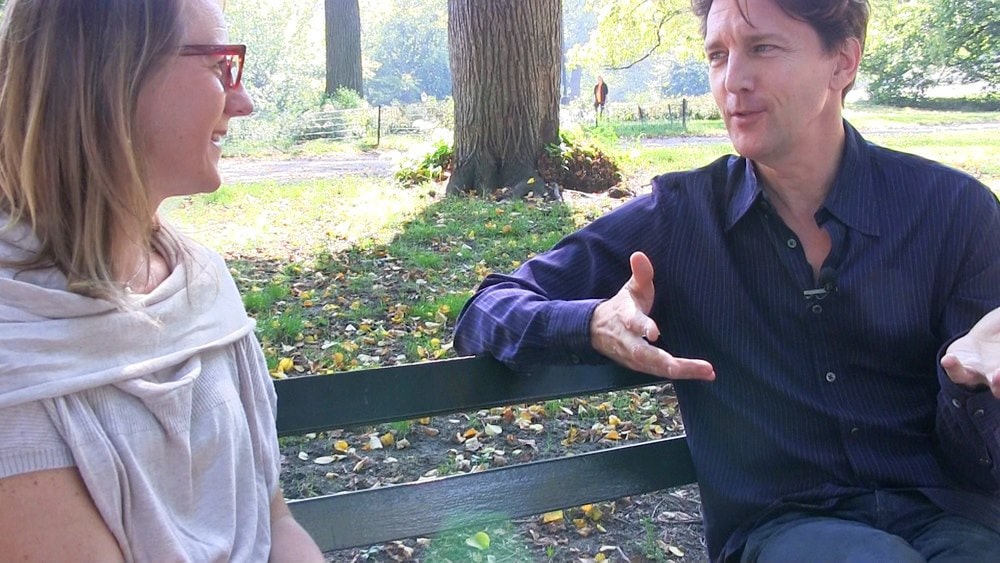 I had a rush of excitement and I felt like I was swimming in a sea of accomplishment. I had asked for something, and it was delivered. Thank you universe â you are beautiful, you are gorgeous; you make me melt – like Andrew McCarthyâs eyes in Pretty in Pink. Oh waitâ¦shitâ¦how was I ever going to interview Andrew without melting? On to the next challenge my brain thought.

I âconvinceâ my friend Michaela, to be my videographer and producer. She thought about the opportunity to meet Andrew for about 1 milisecond and said yes. One problem â Iâm not exactly sure what Iâm going to ask him. I keep putting it off and off and all of a sudden itâs Friday morning and Iâm supposed to meet him in an a couple of hours to do the interview â but I donât really know what Iâm going to say. Iâve been honestly trying not to think about it too much else I will get nervous – so I havenât really been thinking about it at all!

But the fact is â I was having trouble forming questions for the Meet Plan Go opening message because I really wanted to talk to him about things like travel, the Camino de Santiago Pilgrimage( which he also completed and credits with a huge life changing moment for him), how he decided to get into travel writing, Vienna, the beauty of solo travel, and more. But I needed to focus on the event message â which was also about travel â but more generalized. I asked him to inspire and motivate our audience (yes, thatâs right â I was directingâ¦ha), and from my perspective I was personally way past that â I just wanted to talk with him about travel! After all, we had been to many of the same places and had the same travel philosophy â I simply wanted to have a personal conversation with him.

Michaela and I meet him, he extends his hand and a relationship is formed. Iâm used to seeing celebrities around NYC, but seeing and meeting is different. I am fascinated with wondering what their lives are like and how they deal with the publicity and constant attention. So of course because of that I try to go overboard to appear nonchalant â but yes, my insides are melting.

We walk to the park to find a nice shady bench to shoot the video and I try to take the opportunity to better explain Meet Plan Go â who we are, what our goals are, why heâs a great person to open up the event. Yet I canât seem to get very far into my explanations because he is asking me questions â about me. âWhereâs your home base?â
âUmmm â I donât really have one, Iâm nomadic.â I say with an apologetic tone.

Then like everyone else I encounter and provide this nomadic answer â he pummels me with questions. Where have you traveled? Who do you travel with? What was the last place youâve been? Where are you going next? Whatâs been your favorite city? When are you going to write a book? I was slightly surprised by all of the questions â but I guess I shouldnât have been â after all, heâs curious like anyone else.

We talked about the Camino de Santiago walk that I just completed last spring and as we sat down and got microphones we chatted about overcoming fears when we travel and I brought up the Mongol Rally. I told him he would probably enjoy it. A barrage of questions followed. âWhen is it?â, âWhere did you get the car from?â, âHow many teammates did you need to have?â

Then we were ready to shoot. God bless Michaela for remaining calm, cool, and collected as she got everything ready and kept things on track. One problem, I donât do video much â because I really donât feel comfortable doing video â Iâd rather hide behind the DSLR. But surprisingly the conversation was easy, fun, and engaging. A few people stopped and watched us â having that Iâve âseenâ a celebrity look on their face. It was quite odd to be on the other side of that equation for once.

On our way out of the park, Andrew continued to ask me questions about my blogging, twitter, and travel destinations. I asked him about inside scoop on travel writing and working with magazines and his next travels. I thanked him profusely and he went back to doing phone interviews about his new book.

Michaela and I enjoyed a celebratory beer. And I enjoyed basking in the familiar feeling of overcoming fear, and accomplishing a goal. Itâs that feeling which seems to drive all of my life decisions â quitting my job, travel, volunteering in India, driving a motorbike and living in Vietnam, becoming nomadic, doing the Mongol Rally, walking the Camino, and the list will go on and on. If it scares me â then I should do it. Andrew and I had talked about how fear controls most peopleâs lives â it is the single thing that holds people back from doing anything.

But this time fear did not win â I overcame that fear, and thatâs what put me next to Andrew McCarthy in Central Park.

Take that Facebookâ¦.I didnât need your silly digital friends suggestions…after all, in person is always better.

Andrewâs Book – The Longest Way Home – reviewed on Meet Plan Go!
StripOff Your Fear by Betsy Talbot – another great read to get you over your fears!

16 Responses to "Overcoming Fear and Getting What you Want"