âAre you a fisherman?â the stranger asked me âNo,â I answered quickly, but then hesitated and corrected myself â âwell, maybe?â I realized, in the last year, Iâve actually done quite a bit of fishing. I went fishing for the first time in Maine last year and sort of got âlured inââ¦see what I did there? And when I did ice fishing in Alberta a few years ago I loved it; it was a highlight of my time there. Maybe I am a fisherman. Yes, yes, I am a fisherman.

Now since Iâve come to grips with that, I was ready to fish in Norway! Since I am not a very good fisherman and tend to catch super small fish (which I believe are the hardest fish to catch), I figured Norway would be the perfect place to fish again and hone my skills. Fishing means you spend a lot of time just soaking up the landscape around you; itâs meditative, calming, and quiet. And there are few places as beautiful as the Norway Fjords to have to stare at for a day holding a fishing pole!

However, before I picked up the fishing pole, I needed to learn a bit about the rich fishing history in Norway. After all, when you think of Norway, you tend to have images of little, colorful fishing village landscapes surrounded by fjords.

Dried and salted cod has been produced for over 500 years in Norway. It’s a fish of many names, bacalao, salted cod, and Klippfisk, and it was shipped and eaten all over the world. Norwegians prefer the term klippfisk, literally “cliff-fish”. Traditionally it was dried outdoors by the wind and sun, often on cliffs and other bare rock-faces.

Klippfisk was first shipped directly from Ãlesund to Bilbao Spain in 1824. From 1835 on, Spanish importers sent schooners to Ãlesund to pick up cargoes of klippfisk. You could often find 20 to 30 Spanish schooners in the harbor, waiting for the klippfisk to finish drying. This created a booming fishing business in Norway; every seaside village was producing klippfisk.

Years ago the fishing villages in Norway existed out of necessity. There were no tourists or coach buses driving through pumping money into the economy, it was just simple fisherman trying to survive in little towns like Bud or HÃ¥holmen Island. However, the times have changed. Even though these fishing villages still exist â they look and operate quite differently than before.

HÃ¥holmen, a 10 acre island near shipping channels was a prime example of one of those booming fishing villages. Started in the 18th century it still has its original wharves, traditional fishermen’s shacks, and a bakery. It was a rough place with few buildings, the primary thing to do there was to dry and salt fish.

If you want to get a feel for what an old fishing village is like present day, you can tour the island like we did on our trip. Its rugged setting is dotted with red, wooden buildings that now serve as a hotel property. Today, Havstuer HÃ¥holmen offers cruises and fishing trips on various vessels, including copies of a Viking ship and a traditional 1950s fishing boat. No one probably could have imagined back in 18th century that people from all over the world would be coming out to stay on HÃ¥holmen Island as a luxury experience!

Today klippfisk is usually dried indoors with the aid of electric heaters. Youâll find the flavorful fish on menus all over Norway, normally served with bacon and potatoes. Also look for dried fish in âsnackâ form at little local markets like MÃ¦tt & Go in Kristiansund . We bought some thinking it would be the Norwegian version of beef jerky for our road trip! 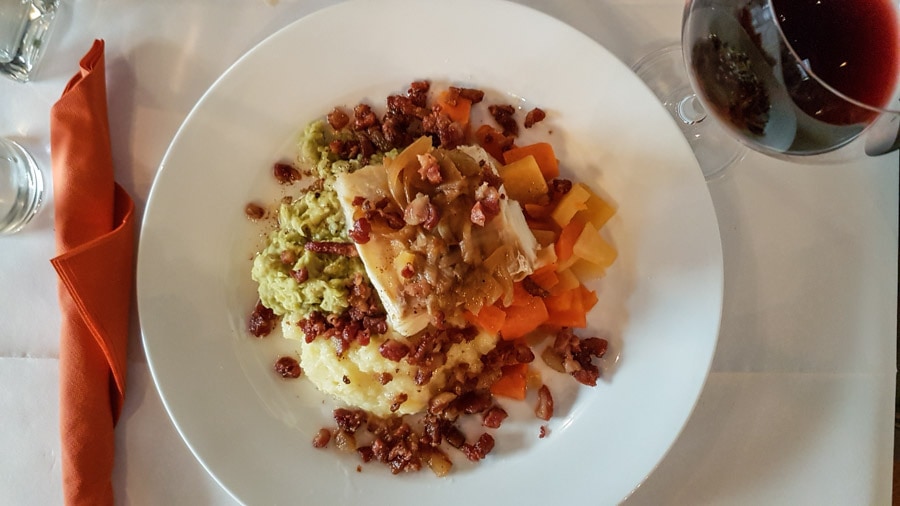 My fishing adventure started at the Saltkjelsnes Campground in Romsdalsfjorden. They say you need to visualize your successes so I started by meeting Jan Roodhorst who caught a very large fish earlier in the morning. Jan is a regular at Saltkjelsnes. He comes to the Romsdalsfjorden to fish and camp 2 times a year ever since 1981.

When I met Jan he was in the process of cleaning his catch for the day. And it wasnât just a catch, it was a GIANT catch. He had caught a cod that was probably 20 pounds!

Being the modest and direct Dutch man, he didnât want me to think this happens all the time. âI have hours without any fish, but you have to just keep trying. The taste of the smaller fish is better than the big ones, but the big ones are more sport,â he said with a grin. He showed me his fishing rod, âHe (the fish) can fight and he can win, but this morning I won,â delivered with a smile. 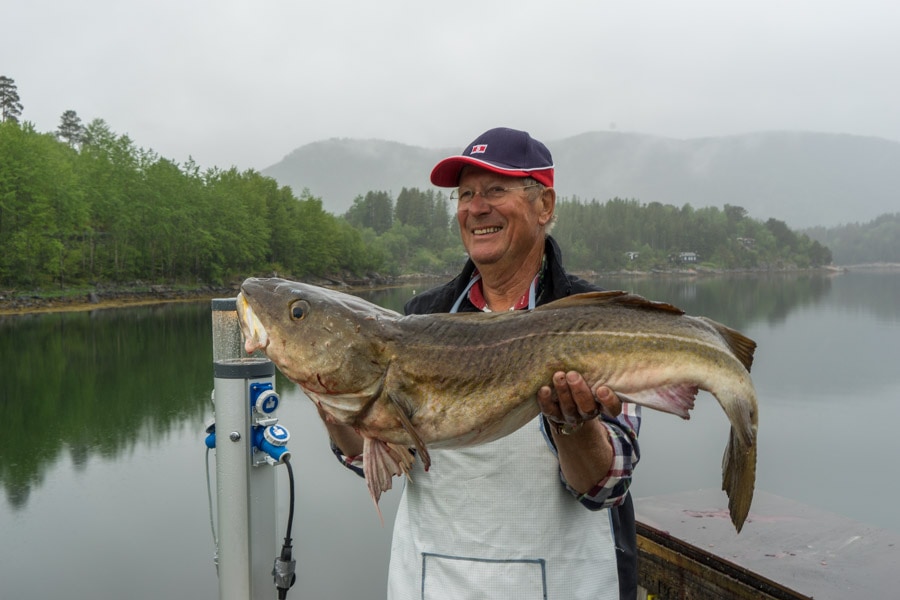 Jan and his catch!

I asked Jan how he started coming to this part of Norway to fish, he explained, âWe were traveling through Norway and Sweden, and I met a man here who had always come here. I asked the man, why are you always staying here – you are not traveling through Norway â it is so nice in Norway? He said to me, Go look around; this is the loveliest place in Norway. I looked around and saw the mountains, the snow, the blue sky and ever since I have come every year here â more than 40 times. You donât need to travel around when you have this.â

As heâs telling me this, his 20 pound fish nearly slid off his wooden table and back into the water! We all gasped, and then had a good laugh.

I was clearly in a beautiful visual environment for fishing, and now I had visualized the type of fish I could catch; I was ready to get out on the water and throw in a line myself! The weather looked pretty ominous though, the fjord was shrouded in thick, gray clouds. I put on my raincoat (a must-have in Norway), and met Peter and Lizbeth who run Fisketurer pÃ¥ Romsdalsfjorden, a fishing company on the fjord.

Peter and Lizbeth are Swedish, and they fell in love with the area on a vacation and decided to call it home. As we chugged through the choppy water in a boat Peter named after his granddaughter, Emma, the clouds started to break up and reveal things we hadnât seen before. It was as if the theater curtains were being pulled back, the orchestra was striking up a powerful tune, and suddenly the snow capped mountains and blue skies were revealed!

I thought the area was pretty spectacular before, but now it just entered mind blowing. 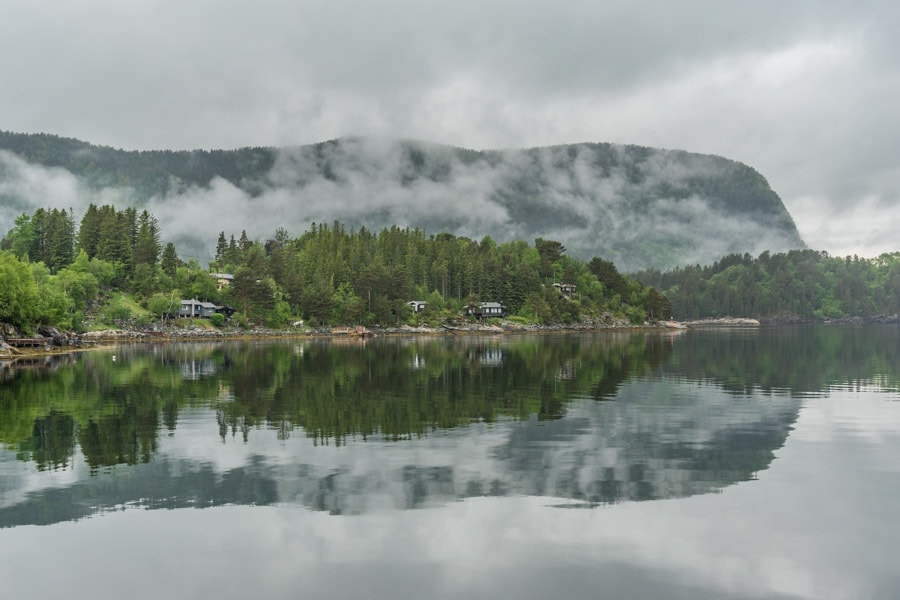 How the day started – cloudy and gray 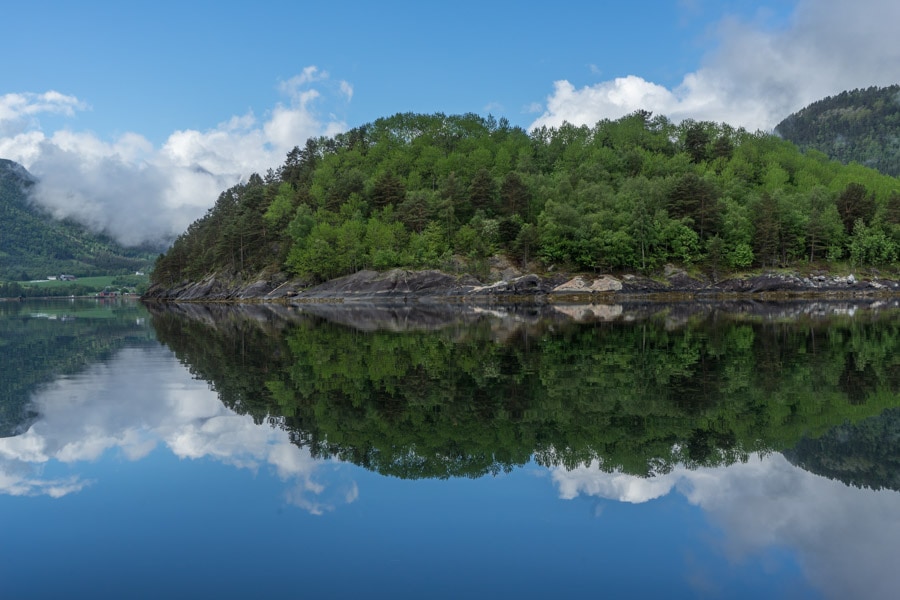 And then the theater curtains went up!

We started shedding layers pretty quickly. I had expected weâd have a downpour and suddenly I was trying to remember if I put on sunscreen in the morning! The weather and landscapes change right before your eyes in Norway â thereâs never a dull moment.

We used radar to determine where to stop the boat and let the line out. We were deep-water fishing, which was new to me. The pole had 5 hooks on the line and there was no casting involved. We simply dropped it down to the bottom (about 200 feet) and then bobbed the rod up and down slowly. It was a pretty easy form of fishing so far. 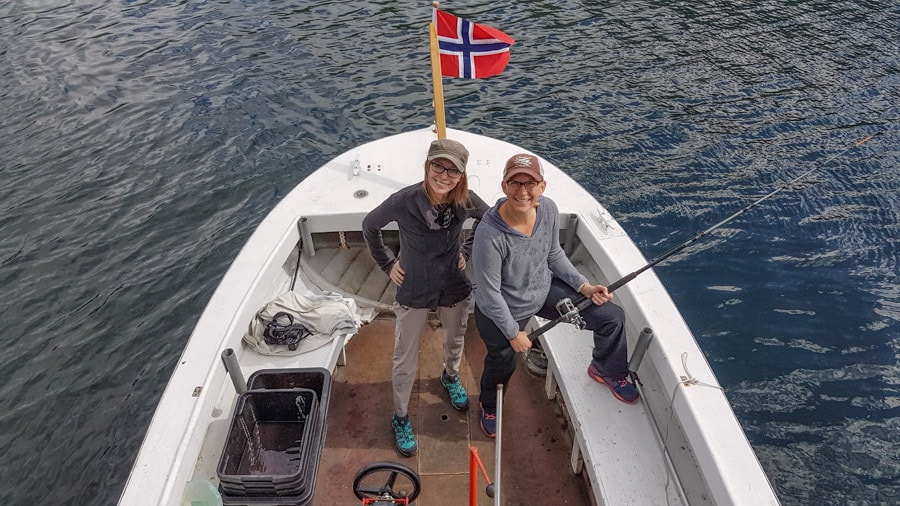 Michaela and I fishing Norway style!

We chatted on the boat, marveled at the scenery, kept bobbing our poles, and Lizbeth fed us lefse for snacks. It was a lovely day on the fjord. Finally I felt a little tug that made me put down my lefse in excitement. Fish on, fish on! I excitedly reeled in the long line anticipating a great cod like Janâs! But to my surprise I pulled up the end of the line and I had two tiny, itty-bitty fish on my hooks. We were all a little dejected. But Peter let it roll off him as he threw the 2 back and had me put down another line quickly.

Well, 2 is better than 1, I thought to myself. And at least I continued my streak of catching small-fish around the world. I thought back to the strangerâs original question â am I a fisherman? Yes, I must be the best small-fish fisherman in the world!

But none of that mattered when beautiful fjords surround you. I didnât catch anything the rest of the day, but I had a spectacular day full of sun, new friends, and lefse. Iâll leave the big-fish fishing to Jan.

See exactly how small my fish were in this video of my Fishing in Norway experience!

Add Fishing in Norway to Your Itinerary

Accommodation: Stay at the campground cabins atÂ Saltkjelsnes Campground. They are small, but cute and have everything you need!
Fishing Guide: Go out with Peter from Fisketurer pÃ¥ Romsdalsfjorden for a half day or a full day! He supplies all the equipment and gear you’ll need!
Do a more luxury fishing adventure at Halholman Havstuer

I was a guest of Visit Norway during this trip, however all opinions expressed here are my own.