The Lure of Ice Fishing

âItâs called fishing not catching, â Big Jim said. I figured he had used that line before. But he was right, and it was a good way to set the expectations for my first day of ice fishing. Big Jim, a fishing guide from Banff, was taking me out for the day to his fishing shanty on Spray Lakes. Ever since I lived in Minnesota, ice fishing had grabbed my attention, yet I had never done it myself. I used to run around Lake Harriet in the bitter winter mornings and look at the ice fisherman in their shacks and wonder why someone would go ice fishing. Was there some magic vortex there, some natural high, some fountain of youth, or pixie dust with special powers?

Why would someone go sit on the ice to fish for hours?Â  With Big Jimâs help, this was the day I was going to finally answer that question. 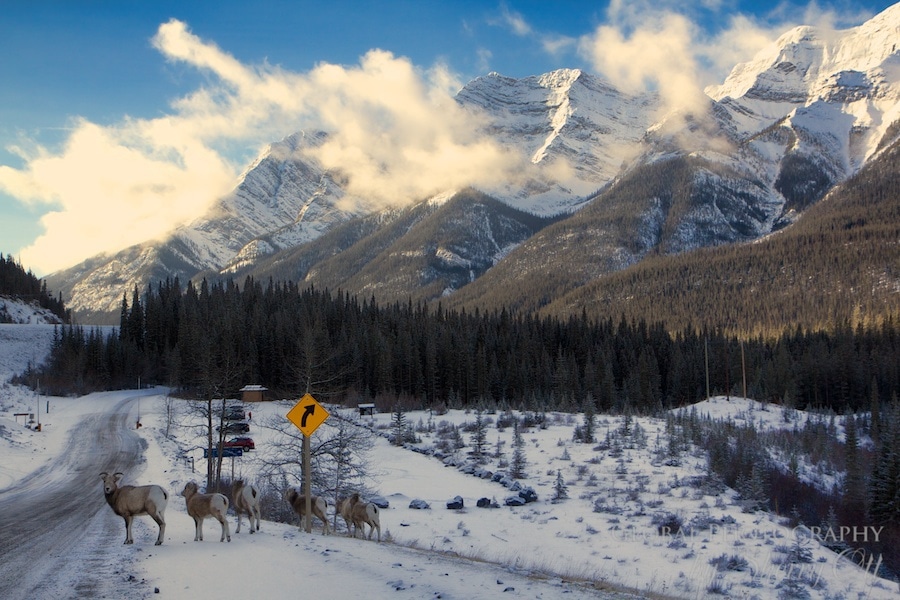 Three deer stepped out on the icy road in front of us. Jim slowed to a stop and we both watched in silence as the deer looked at us and then went on their way.Â  âItâs about the journey, â he said as we were driving out through scenic Kananaskis County, âa morning stop at the bakery in town, drive out through the mountains, hike through the woods to the ice, drill the hole, cook up some beef stirfry, spend the whole day outside, and catch fish â what could be better than that?âÂ  I thought about that for a while, I certainly was enjoying the journey so far, and it was a great way to sort of slow down, get outside, and have a purpose â this âice fishing journeyâ was a meditative process in a way.

It was a beautiful winter day in Kananaskis – I mean âbring-you-to-tearsâ gorgeous.Â  It was cold, but not too cold, bright blue skies, glaring white snow-covered lake and mountains surrounding you, and no one else around.Â  I got out of the truck and breathed in the cold air.Â  It was so crisp and fresh, like a cleanse to my respiratory system.Â  This was the perfect day to be outside. We got all of the gear out of the truck and continued our journey on foot.Â  This was Jimâs secret hiking path; through woods, down little ravines, in order to get to Big Jimâs âtownâ.Â  What Jim referred to as his âtownâ was his fishing shack on the ice.
âYou want a town where no one else is â the goal is solitudeÂ  – and to get all of those fish in your town for yourself or your client,â Jim said with a smile.

After about 20 minutes hiking we popped out of the woods and onto the vast open area of Spray Lakes.Â  All I could see ahead of me was white snow and blue skies. 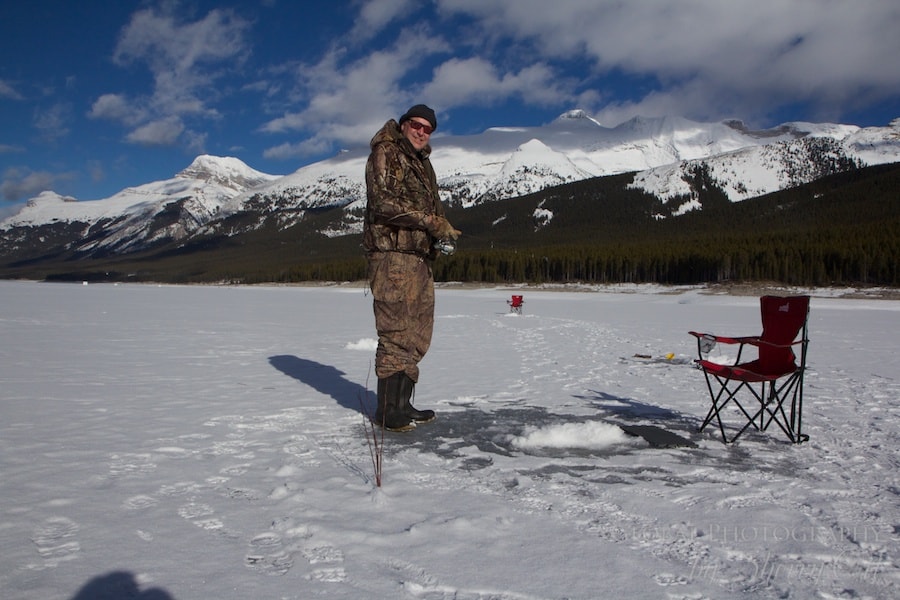 Big Jim was called big for a reason â he towered over me in his camouflage gear.Â  As we walked out on the ice it did give me confidence that if the ice could hold him it could hold me.Â  But I was quickly finding out that under all those layers of camo, was a really sweet guy who had passion for the outdoors and nature.Â  He opened doors for me, picked up a muffin for my breakfast, made stops for pictures, and was intent on making sure I had a spectacular time; just what you want in a guide.

Jim opened up his fishing shack, got the heater going, grabbed the auger, and started making holes; not wasting one minute of fishing time. He drilled a number of holes around the vicinity and we set up poles and chairs.Â  He showed me how to bait the hook, cast the line into the hole, and then bob it up and down at different levels trying to find where the fish were. Ice fishing success is determined by exploring various depths along an area that you are sure has a good population of fish.

âComâon fish!â he would yell in a slightly southern drawl as if he were politely beckoning the fish to get on the hook.Â  I wondered if there was superstition in ice fishing.Â  Any sport where you have to sit around in the cold waiting for something to happen had to be steeped in superstition.Â  “No bananas,” Jim said, âDon’t touch a banana, don’t eat a banana, and donât even look at one before fishing. If a client of mine comes out of their hotel eating a banana I require them to dispose of said banana and go back into the hotel and wash their hands several times. Bananas are bad luck!â

That explained why I didnât get a banana muffin that morning.

How to Ice Fish 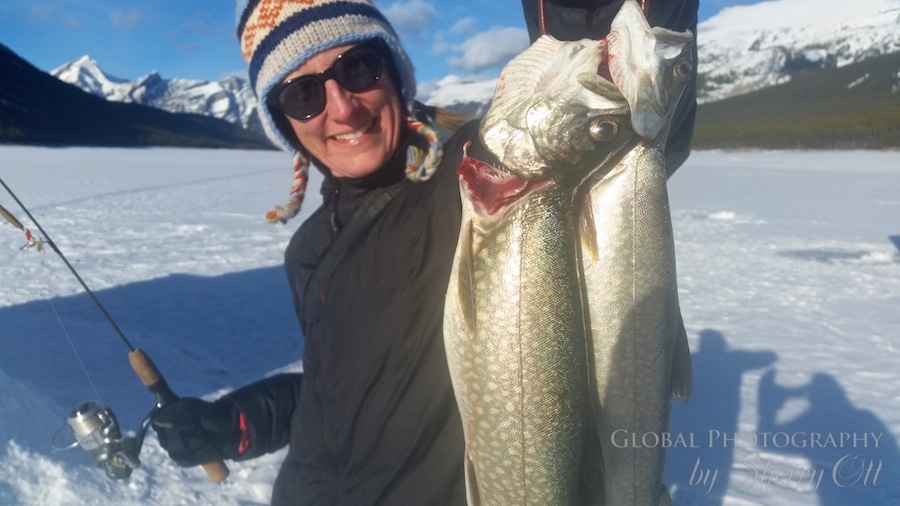 These two are keepers!

Ice fishing is basically a process of sitting, shooting the shit, and taking in the fresh air.Â  You could hear the ice cracking underneath you giving off a noise of tension as if a rubber band is tightened, you pull it, and let it go with a twang.Â  The ice was alive! Weâd sit in a chair by one of the holes and talk occasionally â and then something would happen at one of the holes, Jim would yell âFish on!â and weâd go running to see and hopefully reel one in.Â  Jim was like a giant cheerleader in camouflage, he kept encouraging me and helping me as I reeled the fish out of the hole. He swiftly took it off the hook and broke itâs âneckâ to put it out of suffering all in one stunning fluid motion.

I had caught my first fish!Â  I felt giddy with excitement and satisfaction.

A perfect day for ice fishing!

Ice Fishing is a waiting game

The sun rising over the mountains

Jim cooking up a feast in his fishing shack

Sitting and fishing in a special chair protected from the wind

I fish inside the shack while Jim cooks…I could get used to this!

The fruits/fish of my labor! Delicious!

It was such a perfect day that you didn’t really need to be inside the fishing shack. But there was a smell coming out of the shack that beckoned me like a moth to a flame.Â  Jim had cooked up a beef stirfry that smelled (and tasted) delicious.Â  The shanty was a little haven of comfort with holes drilled in the ice so that you could sit inside with a heater, and fish on the less-than-perfect days.Â  Plus it was a great place to store gear and cook up food.

After lunch we grabbed our gear and chairs and went for a walk on the ice to other areas of the lake to see how the fish were.Â  We kept replaying the âcatching sceneâ over and over again that day. Catching the fish was really rewardingÂ  – not only because in the winter you have brave the elements and suffer a bit for it, but because Big Jimâs excitement was infectious. Iâm not stranger to suffering as fun, I ran 5 marathons in my 30âs â so I sort of get it.Â  Every time he would get a fish on the line he erupted with excitement that had me running across the ice to see what he was going to pull up.Â  It was fascinating to experience his sheer joy bubbling over until the fish was pulled out of the hole.

But Wait….Why Am I Throwing it Back?! 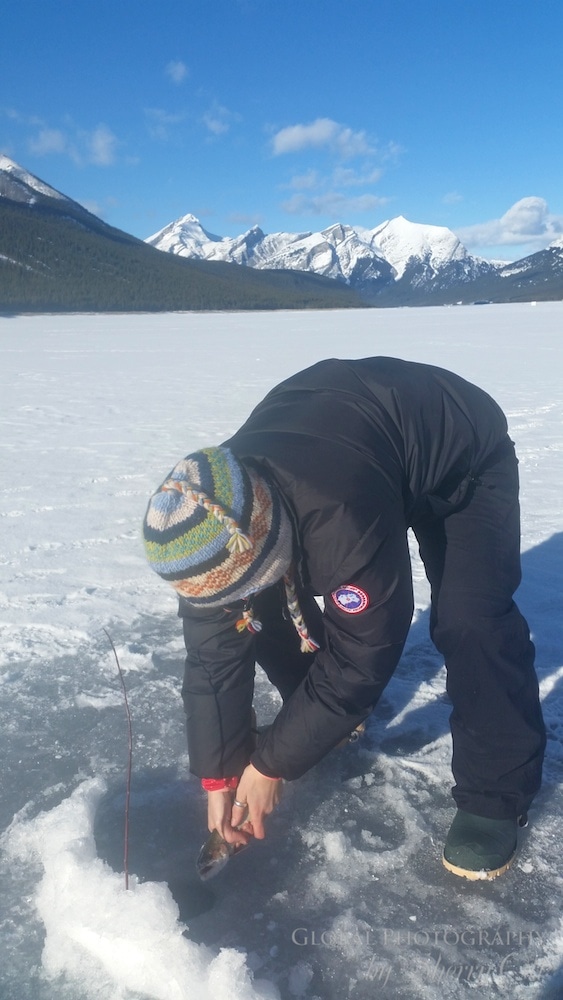 Back you go…goodbye little fish!

But it was then that things got confusing to me. This is the part that most people who donât fish, or are type A like me, donât get; you pull the fish out, look at it, put it back in the water, and let it go.Â  You go through all of that effort and suffering for the moment of simply looking at it and knowing that you did it.Â  Thatâs what makes fishing and ice fishing in particular fascinating to me.Â  Ice fishing is really one of those âlive in the momentâ activities.

However not every fish went back for a life in the water â the first two we caught were destined for Big Jimâs frying pan in the shanty. âConservation is important,â Jim lectures, âand most of the time in the summer itâs catch and release.Â  But the Spray Lakes are under-fished so we can take a couple today.â We ended up catching 8 and keeping 2.

âThe best way to appreciate lake trout, is on the end of your fork, â Jim said with a glimmer in his eyes.Â  This was a man who loved to cook in his fishing shack.Â  After all, eating the fish was all part of the journey.

I finally looked at my watch as Big Jim was frying up our fish and I was stunned to see it was late afternoon already.Â  The day had slipped away, and I had completely lost track of time out on the ice.Â  We dug into our lake trout âdessertâ and I savored every fresh bite.Â  I felt strangely satisfied. This was a fish I caught only hours before, 6 feet from where I sat now. I had spent the whole day outside breathing in fresh mountain air, laughing, and making a new friend.Â  I had the satisfaction of doing something primal, rugged, and confidence boosting.

I had experienced living in the moment.Â  Not once did I think about my work, my to-do list, my guilt, my anxieties; I just thought about fish and learning something new in a beautiful environment.

As we sat in the truck and drove back to Canmore, I was incredibly sad for the journey to be over. As my mind started racing into itâs default thought space ofÂ  âwhatâs next?â,Â  I realized that the journey of being deliciously present was the lure of ice fishing to me. 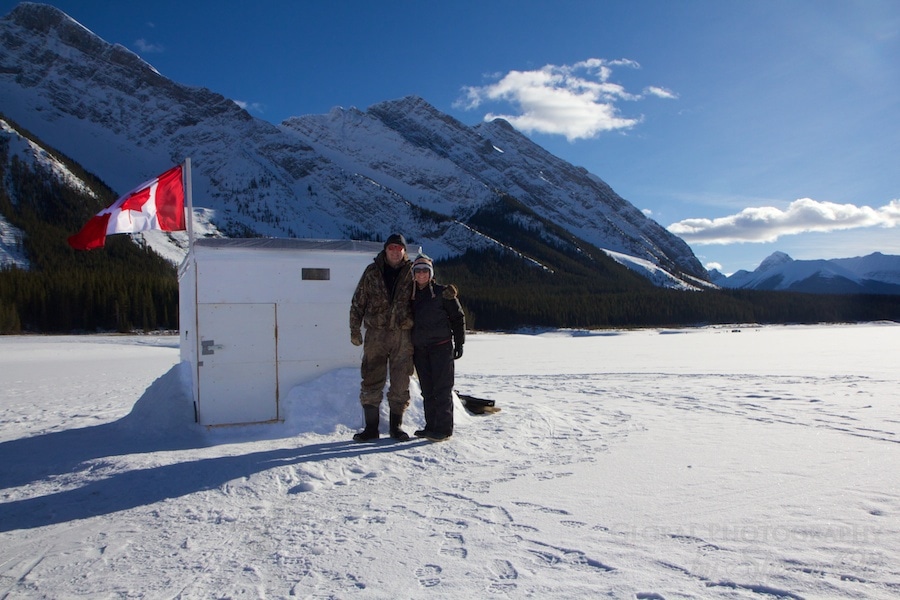 Jim and me in his ‘town’

How You Can Go Ice Fishing in Alberta:

Big Jim offers a variety of guiding services year around and he will supply the gear! Great for beginners, couples, or experienced fishermen who want to know the best spots to go!

Accommodations: Since you arenât allowed to ice fish in Banff National Park, then why not stay in Canmore as you are closer to the Spray Lakes and Kananaskis! I stayed in Canmore at Grande Rockies Resort.
Big Jim will pick you up right at that lobby!

I was a guest of Travel Alberta during this trip, however all opinions expressed here are my own. âItâs called fishing not catching, â Big Jim said. I figured he had used that line before. But he was right, and it was a good way to set the expectations for my first day of ice fishing. Big Jim, a fishing guide from Banff, was taking me out for the day to his fishing shanty on Spray Lakes. Ever since I lived in Minnesota, ice fishing had grabbed my attention, yet I had never done it myself. I used to run around Lake Harriet in the bitter winter mornings and look at the ice fisherman in their shacks and wonder why someone would go ice fishing. Was there some magic vortex there, some natural high, some fountain of youth, or pixie dust with special powers?

Read the my entire quest to understand ice fishing here…

8 Responses to "The Lure of Ice Fishing"