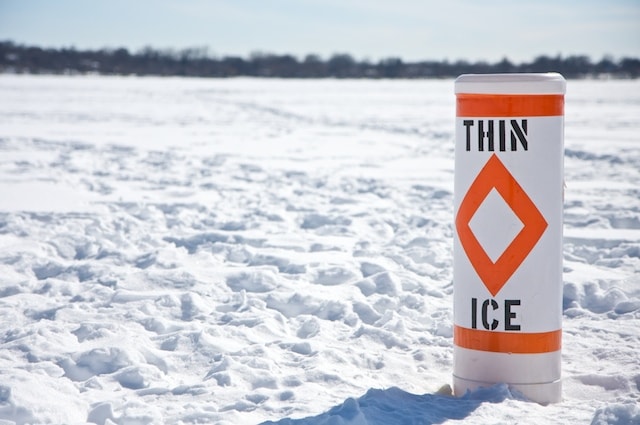 The warning didn’t stop me from walking out and taking the photo!

I used to go running around Lake Harriet in Minneapolis, Minnesota 5 mornings a week â no matter how cold it was. I was one of those crazy runners who never let winter stop me, even if my eyelashes were coated in icicles; in Minnesota winter is a fact of life. Winters around the lake at 6AM were quiet, very quiet. It was me and the ice fishermen watching the sun come up. As I would run the perimeter trail, I gazed out on the lake at the little fishing huts and think, âWho in their right minds would go out there and FISH at this hour in the cold?!â

Then I realized they were thinking, âWho in their right minds would go out and RUN at this hour in the cold?!â

That was the point where I started respecting the ice fisherman â we were the same.

Since Iâve been back in the US for the holidays Iâve been spending time house sitting in Minneapolis. One of the houses I sat was right on one of the many large lakes in the area. I sat inside by the warm fire writing and blogging all day, but would find myself peering out the window at all of the trucks, snow mobiles, and ice huts on the lake. It was like a small town out in the middle of the lake. 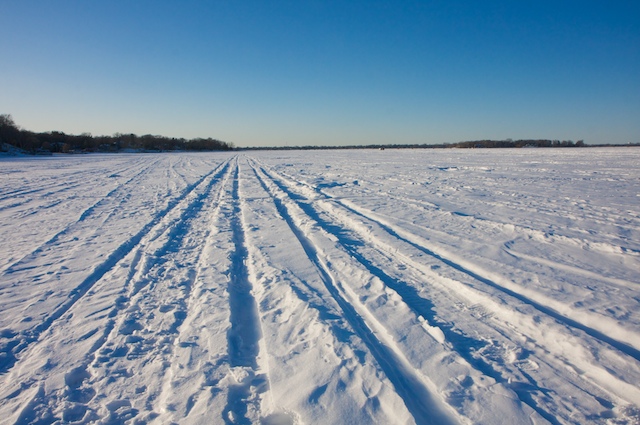 I decided it was finally time I go out and meet some of these comrades. I armed myself with my camera, put on my boots, and prepared to walk on water.

The first step was the hardest. I stood at the âshore-lineâ and gingerly took a step onto the ice, as if I were dipping a toe in the water to see how cold it was. However there was no water, it was solid ice. As I took a few steps, my stomach was churning with butterflies. My ears were perked up trying to listen for sounds of cracking ice; there was only silence. Iâm not real sure what I was so nervous about, there were Â½ ton trucks parked out in the middle of the lake on the ice as if it were a mall parking lot; yet nerves still plagued me. I slowly built confidence that the ground beneath me was solid, and I went tramping out into the middle of the lake.

I must admit, once I got away from shore a ways â it was invigorating; knowing that I was walking on water, standing out in the middle of the lake was exciting. I took pictures of the completely flat snowy landscape and enjoyed the unique perspective my location provided me. 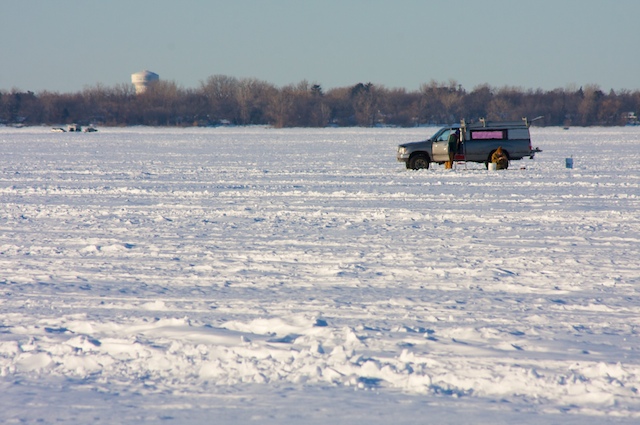 I walked out to the nearest fishermen; two men with a big old truck parked on the ice. I could hear the radio playing in the truck as all the doors were open. It was a nice day, so they didnât have an ice house, they simply sat out on little chairs over their hole in the ice smoking cigarettes. You could tell they were a bit confused as to why some chick with a camera was walking out to see them â but in true Minnesota fashion they welcomed me warmly. I told them that I had never seen ice fishing before which of course brought up the inevitable question, âWhere are you from?â I paused and said, âWell the last place I lived was Vietnam, but currently Iâm house sitting over there.(pointing to the shore)â

From that point on we got along great. It was an uncle and nephew spending the afternoon out on the ice together. They were eager to show me their equipment and even tried to show me how to read the depth finder (who knew that ice fishing was high tech?!) While I was there hanging out with them, they caught a few fish. I was the fishing paparazzi taking pictures of their catch. Â But then they did something that surprised me; they threw the fish back in. What?! You sit out in the cold for hours and then throw fish back?? They told me it was too small. I told them there is no fish âtoo smallâ in Vietnam.; the Vietnamese would have had that fish for dinner. 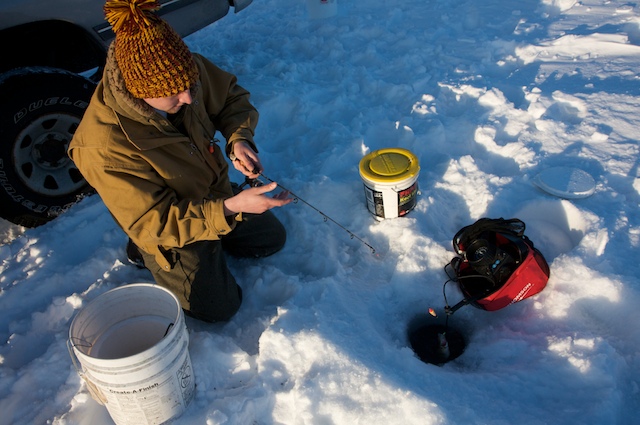 In the Northern US (Minnesota, Wisconsin, Michigan, and South Dakota) winter does not phase the locals. Itâs a part of life â similar to the Vietnamese and rainy season. There are many winter hobbies people are involved in and ice fishing is just one of them. However itâs one of the most popular.

It doesnât require much investment in equipment if you want to give it a try; it can cost as little as $15. Get a tip-up rod, anglers, lines, bait, and tackle, and get a little chair to sit on! For longer fishing excursions you can get a ice house/shanty which can be as simple or elegant as you want. I personally think that an ice shanty is a 2nd home for some men! Oh yes â youâll also need an ice saw or auger that will cut a hole in the ice, as well as a skimmer to clear the slush out of the hole. Finally, you need a lot of patience, but thatâs free.

The question is why do people do it? Most people say that itâs relaxing; it gives them time to think, or hang out with friends. I have to agree â itâs certainly better than sitting inside all winter waiting for the snow to melt! Plus, you may just catch dinner!

To learn more about ice fishing â check out How to Ice Fish on ehow.com

5 Responses to "Walking on Water – Minnesota"