Add This Goat Safari to Your Norway Itinerary

Add This Goat Safari to Your Norway Itinerary

âDo you want to take the baby goats to pasture, â Farmer Petter asked me. My eyes lit up and I felt 7 years old again. âYes, yes! Iâd love to take the baby goats anywhere!â I replied. Oh happy day! Iâm not sure what it is about farms, but no matter how old you are, you revert back to that kid that just wants to play with the animals. That was meâ¦at 47 years old.

Let me back up, my Norway itinerary included a simple visit to the small farming village of Norddal. The village has 150 permanent residents and is located in a valley with steep mountains on each side, on the southern shore of the Norddalsfjorden. Itâs home to a number of small family farms, a lovely church, and some of the most idyllic views youâll encounter in Norway; itâs a true hidden gem. I was visiting Melchior Farms as part of my stay to get an idea of the farming culture in Norway.Â  However, I didn’t just learn about farming culture, I was given overalls, and put to work!

The Evolution of Becoming a Modern Day Goat Farmer

Petter Melchior grew up in the village of Norddal. Back then it was 6 houses with 17 children growing up together; the community was tight and strong. His father was a goat and cow farmer, as well as a miner. Petter decided to become a teacher and went to University. In 1979 he had an opportunity to start working with computers but he didnât think that was for the future so he stuck with teaching. He gave me that knowing smile as he delivered that piece of information and we both laughed. He met his wife, Torunn in University. In the mid 80âs suddenly there was a magnet pulling them back to home and they both decided to move back to Norddal to live and work on his fatherâs farm. 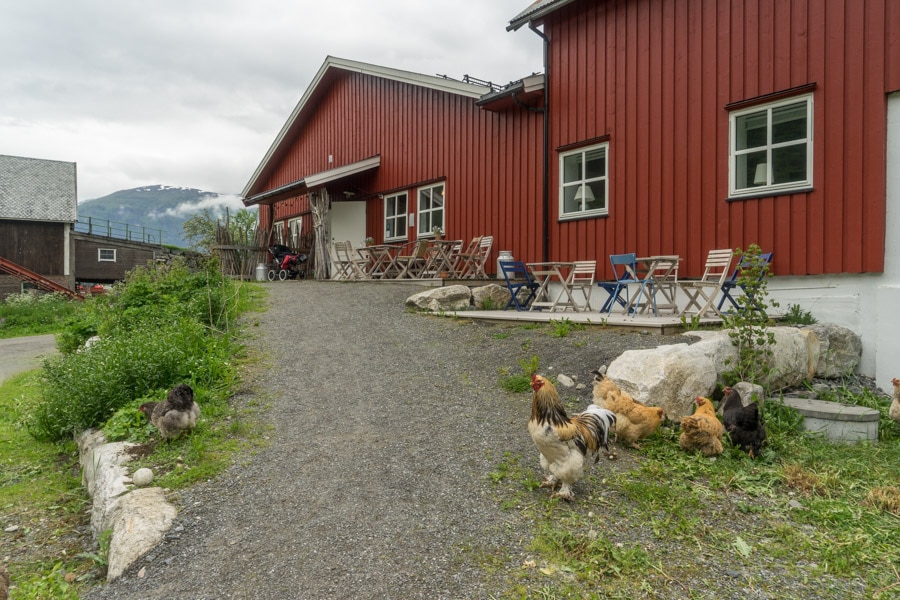 Melchior Farm today. It’s changed quite a bit since Petter was a child

But farming has changed immensely since his father had the farm, you canât simply be a small full time farmer and make it. Itâs not just about producing the goat milk and shipping it to the processing plant any longer. You have to morph into many different things and offerings; itâs become a consumer facing business. Now to be a full time small farmer you have to market your product, go to farmerâs markets, create and sell products directly, and get involved in tourism.

Petter and Torunn focused on building all of these new parts of the farming business. They not only do the traditional goat milking and twice a day, but they also participate in the farmerâs markets in various areas â Alesund as well as a little 3 day market in Norddal with concerts and dances all around midsummer. They have created products to sell directly to consumers, they run the town pub, and they take people like me on a goat safari. Itâs much more than simply farming these days.

âIn a small village like this, you need a âmotorâ, and Petter is one of them,â explained Torunn. 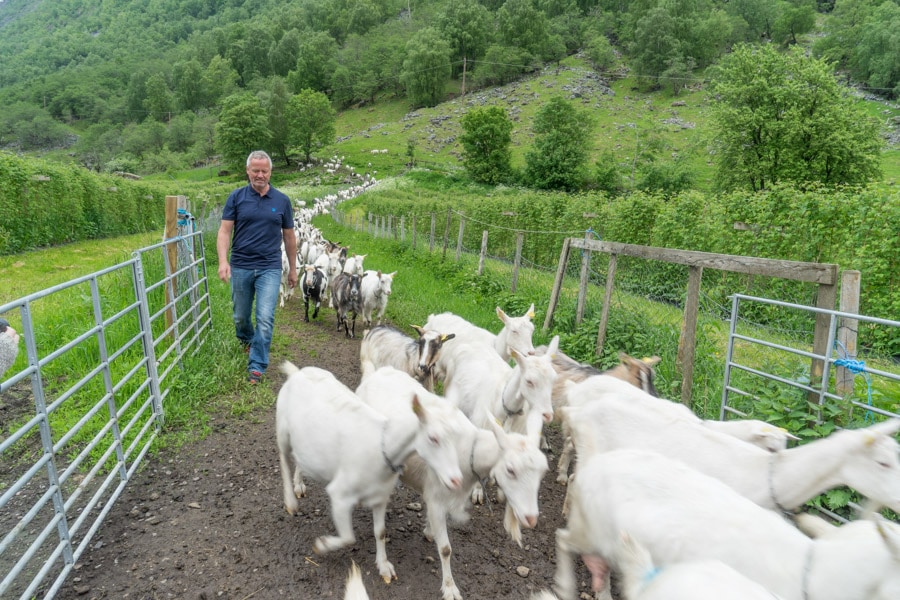 Farmer Petter bringing in the goats for milking

We started by walking through their barn and learning about the goats. They milk them in the barn with modern equipment in the morning and evening and the rest of the day they are out in pasture grazing. The milk is sold to the local dairy to make cheeses (like the yummy SnÃ¸frisk) . They also have resurrected Petterâs motherâs sausage recipe and make cured meats that were surprisingly delicious. He has both dried sausage and cured goat leg; if I hadnât known they were goat I never ever would have guessed. So yes â we started our farm tour by eating goat meat. Let me take a second and be realâ¦these goats arenât just for cute looks and dairy, some of them do get butchered. Itâs a farm, and itâs how they make a living.

Jams and jellies made at the farm

Cured goat meat from the farm

We also tried organic pear and apple juice, raspberry juice, raspberry jams, pear jam, goat cheese, a hard white cheese and then the soft SnÃ¸frisk cheese. All of this washed down with a local beer brewed by a farmer in Norddal.

It was nearly milking time so we went outside and called the goats in. The goats were dispersed on the hillside and suddenly with one little motion from Farmer Petter they all came running, and I mean RUNNING down the hill into the little chute. I thought I was going to get trampled! Some stopped and checked me out â but most went sailing on by on a missionâ¦food and milking. As part of the farm tour and safari, you can participate in the milking process.

It was a special time of year when I visited â it was spring. Spring is when goats move from winter farms to summer farms higher up in the mountains. Petter showed me the baby goats, called kids, who were separated out in a different pen in the barn. Thatâs where my âgoat herding jobâ began.

Petter gave me some blue overalls to put on and soon I was corralling baby goats into a little tractor front loader. He asked if I wanted to ride with the goats to the pasture. Before I knew it I was put in the front loader of the tractor and was surrounded by baby goats! Each nibbling at me and trying to climb up on me like a puppy. It was one of my favorite all-time travel experiences; I turned 7 years old again at the farm. Since this was the first time these baby goats had ever left the farm, I felt obliged to talk to them the whole way so they wouldnât be scared. Yes, thatâs right â I became a goat mom.

Me and Petter getting ready to do some work on the farm!

One of the kids…

The view from the tractor

It was a 10 minute scenic ride to the upper pasture that was our final destination. We were taking the kids there to learn how to graze. I know this sounds like something that should be instinctual â right? But it isnât. These baby goats so far only knew life in the barn. They had never been let out to graze and they were bottle fed up to this point. The art of herding is letting your animals go, but also knowing how to get them back.

We arrived at picture perfect farm greeted by a middle age woman with her dark hair pulled back and little strands of gray peeking out. Petter said to me, âSheâs the goat whisperer.â As soon as she smiled, her eyes turned into little crescent moons and smile lines appeared; she oozed happiness and ease. I knew I could leave âmyâ baby goats I had newly bonded with in her hands. Petter opened up the loader and the goats and I came spilling out into the pasture. They nearly trampled me they were so happy.

Turie greeting us and the baby goats!

Goats prancing off to distant pastures

So excited to be in pasture!

Turie loves goats. I was enthralled as I watched her greet the goats and they literally leapt around in excitement. They were just like a bunch of 5-year-old toddlers getting out on the playground for the first time. She keeps them on her small farm for a few weeks letting them roam, teaching them where and how to find the water, and feeds them. Petter visits them every day so they get used to the idea of coming to him when they see him. After this learning process for 3 weeks, they are sent up further to summer pastures in the mountains, no longer fenced in. They still get milked twice a day, but when Farmer Petter comes to the high pasture to milk them, they know the drill and come running, just like the adults did at the barn. Turie basically prepared them for their adult life.

Watch my goat safari in action!

As we bid goodbye to the baby goats they excitedly surrounded Turie. I felt like I had just left my kids at preschool, I was a little sad to leave them. But I knew they were in good hands and their life of grazing in the beautiful Norwegian Fjordland was just beginning.

How you can plan a goat farm visit in Norddal

Time: Aprox. 2 hoursÂ  Price: 300 NOK per participant
Melchior Farm Website
In a close encounter between man and animal we visit the mountain familiar goat kids from Melchiorgarden in their summer pasture. An activity we recommend especially for families; this is a certain winner among the children. We bring grain feed, guarantee much fun with the animals, and bring packed lunch fr om the farm kitchen.
Note â the element of taking goats to pasture (like I did) isnât always available since it only happens at a specific time of year â but during your goat safari you will be able to work with and get close to the goats regardless.

I was a guest of Visit Norway on this trip, however all opinions here are my own.

6 Responses to "Add This Goat Safari to Your Norway Itinerary"