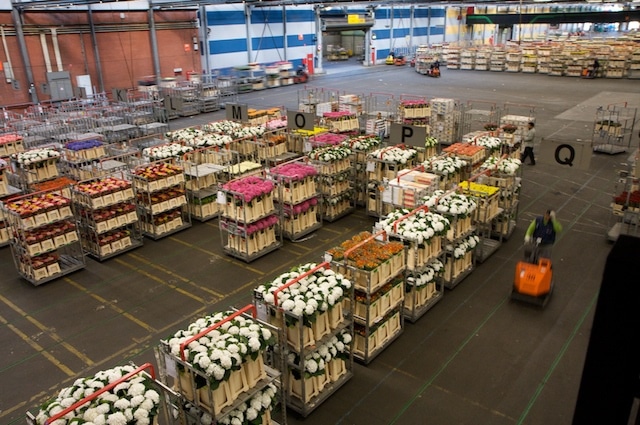 Trains of Flowers move through the center

The alarm went off at 5:15AM and I wondered why I was doing this to myself. Itâs just flowers, I could sleep a little while longer â right? Yet my desire to see flowers ended up winning out over my desire to sleep; after all, this was the only time Iâd be able to see the largest flower auction in the world â so whatâs a little lost sleep?

Graham, my couch surfing host, decided to kindly come with me to the Aalsmeer Flower Auction just outside of Amsterdam near the airport. Unfortunately heâs not a caffeine addict like me, so we had a cup of decaf before leaving his apartment at 6AM. Fortunately he was with me and we were able to navigate a number of local transportation snafus/closures/construction â else I might have just given up and went and sat at a cafÃ© for some real coffee skipping the logistical journey of flowers through this famous flower market!

The alternate bus route dropped us off by the large Aalsmeer auction building. Large doesnât really describe it; I could use ginormous â but I donât think itâs a word. The Building is the third largest building in the world, in terms of floor-space, covering 10.6 million sq ft.

We followed the group of workers (presumably) off the bus and towards the building; but soon one of them kindly asked us where we were going. We clearly looked like tourists considering I had 2 cameras and 3 lenses and Graham was also decked out in digital equipment! They told us due to the construction the bus had to drop us off behind the building and a shuttle would come pick us up and take us to the front. Ok fine, no problem, weâll wait. Thatâs exactly what we intended to do until this very energetic man who worked at the auction basically led us by the hands into the back entrance of the building. He was talking to Graham and I was in a state of shockâ¦we had just walked onto the distribution floor with carts zipping by us, trolley trains moving on tracks automatically, and here we wereâ¦two tourists. 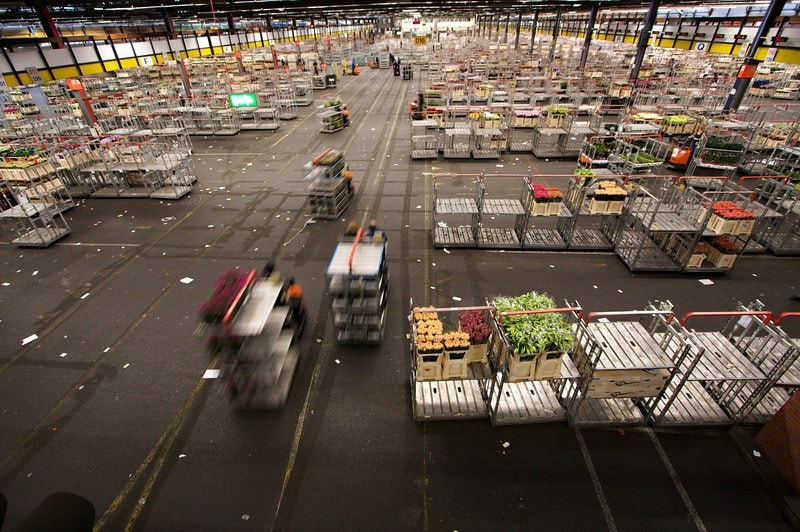 Everything was in a constant state of motion

Based on my prior corporate career in visiting distribution centers, I was pretty sure we were somewhere we shouldnât be; heavy moving machinery and sandals donât really go together. However this nice man chatted away to Graham as he lead us between moving trains and among all of the beeping chaos delivering us to a set of stairs that would take us up on the tourist catwalk. 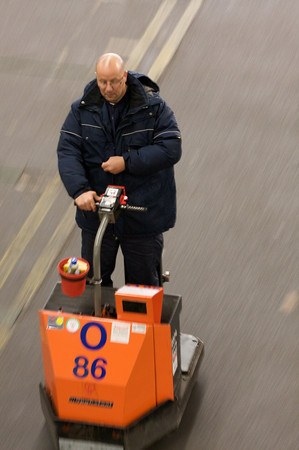 Graham kept looking at me telling me I should be taking pictures, however I was still in a state of shock and the thought of pulling a camera out and getting this completely unique perspective of the auction/distribution center didnât even occur to meâ¦I was a deer in the distribution headlights. This could be why I donât consider myself a professional photographer; I get a little too caught up in the moment.

The man pointed us down the catwalk to the regular tourist entrance, then ran back down the stairs and went to work. We stood on the catwalk looking down from where we had come and said âWhat just happened?!â This was our introduction into the Wall Street of Flowers where everyday 20 million flowers and plants follow a carefully choreographed dance through the auction halls.

As I finally started to take in my surroundings and pull out my camera, I realized everything was movingâ¦even the catwalk vibrated. The place was in a constant state of motion everywhere you looked. The second thing I noticed was the smell – oh, the smell! Bundles of roses, daisies, irises, lilies, and hydrangeas in containers were being wheeled around by trolley train; the sweet smells wafting up to our viewing area on the catwalkâ¦pure nose bliss.

But the real business was the buying which has increasingly gone more hi-tech each year. They had viewing windows on the catwalk where eager camera clad tourists could take pictures of buyers doing their work. Imagine if a group of tourists came and took pictures of you at your cube each day reading email; that would take some self-control. Maybe thatâs why the buyers were in a room with glass separating us from them. Their work spaces looked like high tech gaming stations in a university lecture room. Trolley trains of flowers slowly moved in and out of the room and men (yes, mostly men) were wearing headsets while working at 2 or 3 laptops. They seemed to have about 8 eyes as they watched flowers, âthe clockâ, their laptops and cell phones simultaneously. I of course had an eye on their cups of coffeeâ¦wishing for a jolt of caffeine. 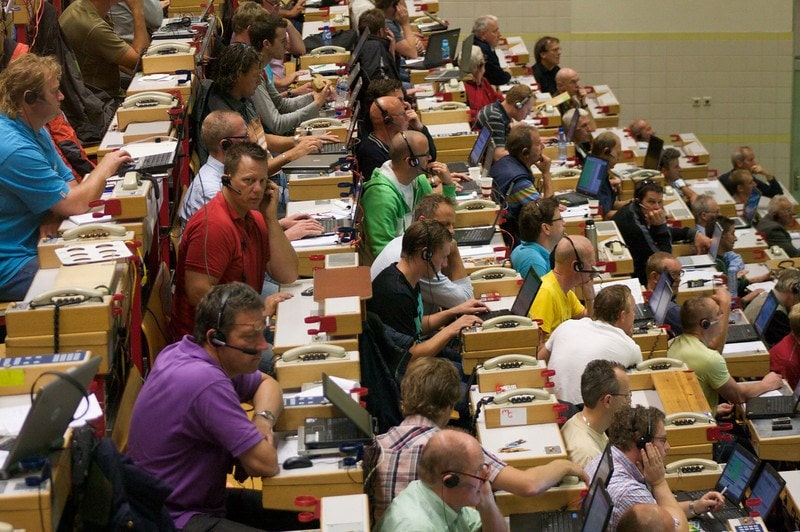 The clock was definitely the most important piece to their jobs. This is not a clock to tell time; itâs the auction clock. A giant digital clock representation that would count time down from 100 was the focal point of the room; as the time falls, the price of the flowers fall. The first person to bid gets the item at that price. The whole things reminded me of the old game show Press Your Luck. I imagined the buyers whispering in their headsetsâ¦âno whammies, no whammies, STOP!â resulting in a purchase of roses for a Stop and Shop chain in Boston. This process seemed more like a gamble than an auction because if you wait too long hoping for a lower price, you might get shut out completely by other buyers willing to pay a higher price. 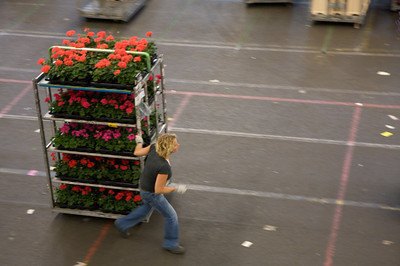 Flowers on the Move

Time is of the highest importance at Aalsmeer. Clearly the whole place was operating on a tight schedule; after all, the flowers spend no more than 14 hours at the facilityâ¦a short stop on their journey around the world. The ability to move 20 million flowers through a facility in 14 hours takes precision. The whole market operated like a fine tuned machine which to the tourist eye looked like complete chaos. To get an idea of how the whole cycle works, I found this explanation on the Aalsmeer Auction website:

Follow the path of a flower
8PM Transport â Growers select their flowers for auction and send them on their way to Aalsmeer.
10PM â flowers are checked in electronically
10:30PM – all of the flowers are put into different refrigeration areas to prepare for auction and flowers are grouped by variety
4AM Inspection â Quality inspectors move throughout the trolleys of flowers checking quality and making notes that will be included with the auction data
6-8AM the clock â the various auctions begin and bidders buy as the âclockâ ticks down in pricing.
7-10AM Distribution â Flowers move to the distribution area and resembles a chaotic mess
11AM Transport â flowers are transported out to customers who bought them
4PM – the flowers have made it to the consumerâ¦whewâ¦all in less than 24 hours.

I stopped by the cafeteria on the way out in hopes of a good strong cup of cafeteria coffee only to find out their coffee maker was broken. Graham smiled at me smugly and tried to continue to sell me on the benefits of a caffeine free life. I wasnât buying it.

On our way back to the city center I dosed off in the bus dreaming of roses flying off to Chicago, San Francisco, Barcelona, and Capetown. Graham woke me up at our stop and kindly took me for a proper cup of coffee â after all, it was only 9:30AM; we had done a lot of traveling in these wee morning hoursâ¦sort of the like the flowers at Aalsmeer.

Some of the staggering numbers:

More information on how to get there and opening times:

8 Responses to "The Flower Clock"