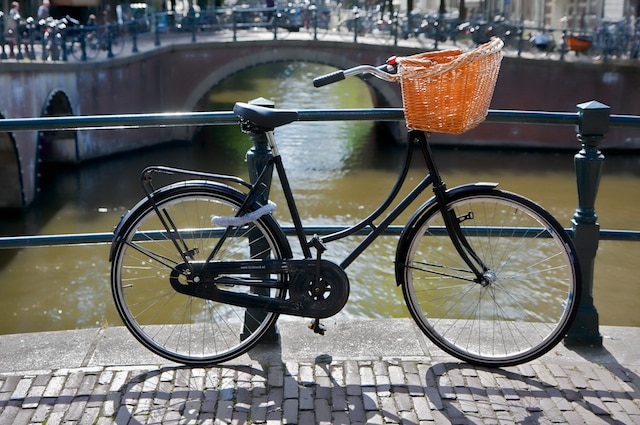 The best form of transportation...complete with storage.

It was 11:30AM and the man at the ticket counter looked at me anxiously and said âAre you ready?â.

I took a deep breath, tightened my backpack straps, got a good grip on my camera and said âYesâ confidently.

The machine let out a long BEEEEEP!

My I Amsterdam card was now officially ticking.

I was off to the turbo tourist races armed with my camera, map, comfortable shoes, backpack, and my I Amsterdam card.Â  The card was my ticket to get into numerous museums and events for free around Amsterdam in addition to discounts at tourist attractions and restaurants. Whatâs the catch? Itâs only good for 24 hours and it costs 38 Euro. On Tuesday I told you all about how to use the I Amsterdam card strategically to get the maximum value out of the card, I was now ready to put all of my strategizing to the test.

After plotting my route out on the map, figuring out closing times, and renting my Mac Bike with my discount, I was ready to go. I normally try not to travel like a tourist if I can help it, I donât like to go where everyone else goes; instead I like to find unique travel experiences. However, I thought I could do the traditional tourist things for a day and it wouldnât kill me. However, I couldnât just dive into the tourist pool headfirst â I had to do it my way; a little quirkyâ¦sort of a belly flop into the pool I guess. I had chosen some of the more small, off-beat museums as well as attractions that were a little different. 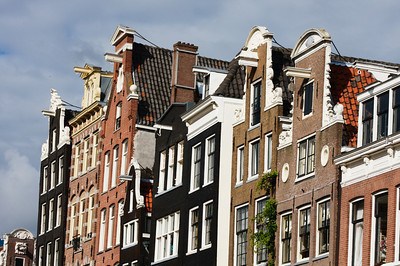 Van Loon House
I started my tourism overload at Museum Van Loon, a historic old canal house of the prosperous Van Loon family. Willem van Loon was one of the founders of the Dutch East India Company. The museum is housed in a double canal house that dates back to 1672. Most of the interior has remained intact throughout the centuries.

The rooms, furniture, and art were amazing; transporting you back in time to the decadence. It made me want to strap on a corset and attend a glorious party. Actually, in the month of August they have opera performances in the garden â no corset required.

Foam Photography Museum
My second stop was the Foam Photography Museum. No surpriseâ¦.I like photography â so I was quite excited to see the exhibit. The photography duo of Inez van Lamsweerde and Vinoodh Matadin put on an exhibit titled Pretty Much Everything. They successfully intertwined art, fashion, and portrait photography works next to each other.Â  It was some crazy, mind expanding, work – and of course I loved the quirkiness of it all!

Museum of Bags and Purses

When I saw this on the list of potential museums for the I Amsterdam card, I had to go. Considering my prior corporate career and current freelance career is all about handbags, I had to see this. I was pleasantly surprised to learn about the entire history of the handbag, learn about how and why they were made and the evolution of materials and uses. I found it all quite fascinating and the displays were gorgeous. It made me dream of owning a vintage purse! 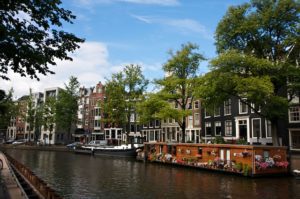 Houseboat with a Green thumb

Houseboat Museum
I knew this would be a quick stop â but it was on my way to another site, so I thought I could swing it. Plus â who hasnât walked the canals of Amsterdam and wondered what the insides of those houseboats looked like? This was my chance to get a better feel for living on water would be like. It was a quick and informative stop, and yes, it did seem bigger than most NYC apartments!

Everyone needs a breakâ¦so I parked at a cute little cafÃ© and had a late afternoon coffee and sandwich enjoying my downtime simply sitting still and breathing. 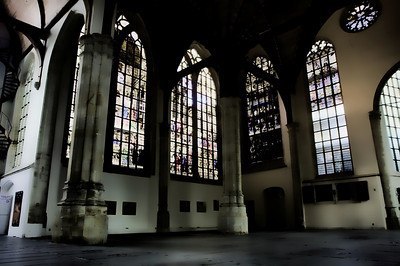 Oude Kerk
Next stop was the red light district and the Old Church; strangely this church sits in the heart of the notorious district where anything goes. Perhaps this is why the inscription above the bridal chamber is “Marry in haste, mourn at leisure”. It was 4PM and I had to keep moving as museums closed at 5 PM. I had time for a quick look through the church and itâs magnificent organ and then had to move on.

Museum Our Lord in the Attic
A block away from Oude Kerk was the small, hidden museum Our Lord in the Attic. Yes, itâs just exactly what it says â an old canal house with a church in the attic. It was hidden in the âatticâ due to the Reformation, when Catholics were forbidden to hold public services. I thought this was the perfect alternative to the Anne Frank house since there were notoriously long lines to see that hidden home. I walked in 15 minutes before the hidden church closed and told the desk clerk that I would be fast. This little house was like a maze, but when you finally did get to the top floor it completely opened up into a long narrow church â quite a site. Unfortunately it was under renovation when I visited, but I was still able to get a feel for the layout.

It was now 5PM and my museum and church visits had officially ended, so it was time to go to the later night attraction â the canal cruise.

Holland International Canal Cruise
They stayed open until 7PM and the starting point of the cruise was near the Red Light District so I had positioned myself perfectlyâ¦thanks to my preplanning strategy. Even though I had been doing touristy things all day, once I set foot on the boat this was the first time I felt like a tourist. The pre-recorded tour blasted out in 3 different languages and we went cruising around the canals that I had been biking around all day. I really didnât like the cruise as I felt like I really got nothing from it, I would have much rather been on my bike looking around. However I did use the time to relax and take some notes

A quick look at the stats – 7 locations in 7 hoursâ¦whewâ¦I needed a beer.

Day Two:
Van Gogh Museum
I still had 1 Â½ hours left on my card officially, so when I found myself near the Van Gogh Museum the next morning, I decided to make the most of my card and hop in the Van Gogh museum before my 24 hours were up. This was the best decision I had made yet as the museum was big and I definitely needed more time in it so using it as my last stop was perfect!

I felt like I had squeezed everything out of the I Amsterdam card that I possibly could in 24 hours â it was successful. I was also relieved to end my role as turbo tourist â I happily handed in my map and went back to wandering aimlessly and slowly trying to fit in with the locals.