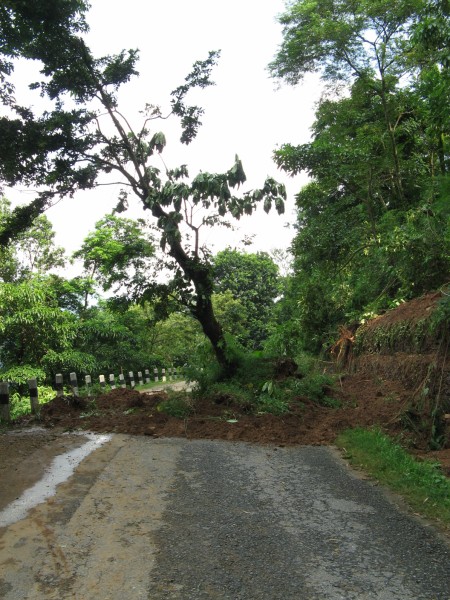 Today was the day the surrender happened; surrendering to my new environment. I believe this to be the first surrender, I think there will be many more in this volunteering adventure.

I met my âguideâ Khadgo in the morning in Kathmandu and we set out to go catch a local Nepal bus, other wise known as a âminibusâ, to the village of Puma; an approximate 6 hr journey. Khadgo was not really my guide, but more of the delivery man. He was supposed to deliver me to the village and then leave.

We went to the âbus areaâ of Kathmandu which was really more of a mud pit with various size buses and minivans packed full of people way beyond any safe capacity limit. I realized I was going to be riding one of these mini-vans and that sort of put the fear of God in me. I hadnât quite made the transition to easy going vagabond yet â that honestly takes a few weeks after coming out of a comfortable Western cultureâ¦but I was getting the crash course in culture shock over the last two jet-lagged days and I had to stop fighting it. Khadgo negotiated a place for us to sit in the back of the minivan. He told me to sit by an open window as fresh air had to help in this situation. These are the mini-vans that I had seen tons of times around the world; Africa, Malaysia, Indonesia, Morocco, and India. The vans that were crammed full of people (and sometimes livestock) with people peering out at me riding in my taxi; looking at me as if they were begging me for help silently saying âGet me out of here pleaseâ with their eyes. Now I was going to be one of them. 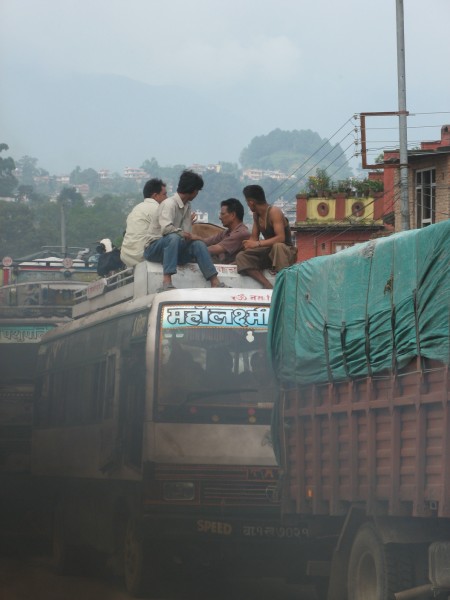 In any western culture, this van was not meant to seat more than 10 people maximum. We started with 15 people in the van. Granted â this van shouldnât have even been running by western standardsâ¦bellowing out black smoke, clunking in idle as if a bolt were rattling around somewhere, no shocks, and I just prayed the breaks worked. The only thing that I knew worked for sure was the hornâ¦the horn always works because you couldnât even get out of the parking lot without a horn in Nepal.

By the 3rd stop there were 18 passengers. Then just when you thought there is no way they can fit more people in this death trap, we stopped again and let two more people in â¦and a refrigerator. Iâm not kidding, they hoisted a medium size refrigerator on top and secured it down along with the other luggage up there (including my backpack). I had my camera and my small backpack with my computer in the van on my lap and Khadgoâs lap.

So with 20 people in the van, me in the far back corner of the van head out of the window and high on Dramamineâ¦we took off. The driver, a young Nepalese boy, thought that he was in NASCAR. In between dozing off (thanks god for Dramamine) and being painfully lucid, I watched the boy act as if he were Luke Duke driving the General Lee at breakneck speeds. We were going around hair pin turns so fast and hard that he would hang his head and upper body out the window when he was turning right and then move his whole body left when he was turning left. I think it was an upper body workout for him; the passengers were bobble head dolls. Weâd weave in and out of oncoming traffic narrowly avoiding other trucks and buses. Donât think that he was the only one doing thisâ¦this is how everyone drives. 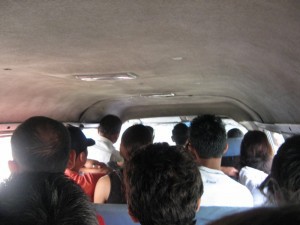 My vantage point in my microbus

The Danger is Real

At one point there was a murmur on the bus and Khadgo leaned over and told me that a truck just went over the side of the mountainâ¦I said âWhat?!â, hoping that I had lost something in translation. He proceeded to point to the area of the plummeting truck as we rounded another turn. You could easily look across and see that a huge truck just plummeted to itâs death. I told Khadgo âPlease donât tell me this stuff, it freaks me out.â I took another Dramamine hoping to drug myself enough to get through this ride. I thought about my family and friends and said a silent goodbye just in case though.

After about 3 hours into my Nepal bus ride we came to a stop and I was awakened from my doped up sleep. The driver and âconductorâ got out and went to see what was going on with the cars in front of us and they came back, said something in Nepali at which everyone erupted and they started getting out. Khadgo told me to wait while he went to find out what was going on. He exited through the back window that I had been hanging out of as it was the easiest way out of the packed van. Soon he came back and gave me the bad news. The road had numerous landslides (it is monsoon season after all â I probably should have checked into that before I decided upon this crazed adventure), and there was no way the cars or minivan could get throughâ¦it was closed, but it was the only way to Besishahar. He told me that we would need to get our bags and walk about 5 km to get to the other side where the buses could get through. 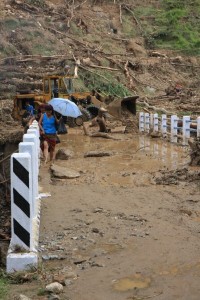 All I could do was laughâ¦this was my first surrender; surrendering my patience. I strangely was ok with all of this (maybe because it was safer than riding in the minivan), or maybe I had just realized that this is what happens in developing countriesâ¦you just have to roll with it. Nothing is surprising, or out of the ordinary, you just have to be patient and let things happen.

Unfortunately I wasnât really dressed or packed for a 5k trekking outing in which we would have to be wading through water, mud, and rocks. I rolled up my pant legs, changed into my water sandals, and strapped on my 50 pound pack (including camera), and we took off. All I can say is that it is a good thing that I am moderately in shape else it would have been a disaster.

We walked for an hour and a half through mud, waterfalls, rocks; about 6 different mud slides in all. I was drenched with sweat and hungry, but I didnât want to eat anything for fear of getting ill in the next bus. So I settled on a coke and we kept going until we reached the buses at the other side. It was a pilgrimage of sorts and we had made it. 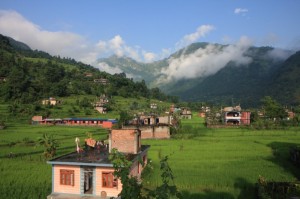 We reached Besishahar about 3 hours after we had originally anticipated therefore we were unable to go any further to the village that night â we had to stay in Besishahar. After I had a shower and a beer, I felt good about the day. I felt like it was my first step to surrendering to my surroundings. Yet I knew there would be many more steps to come as I was still terrified about staying in the village. But at least I was one step closer to coping with it all. I lost a bit of âAmericaâ today on my Nepal bus ride â and that was good; thatâs exactly what needs to happen for me to get through these 2 weeks volunteering here.

5 Responses to "Want an Adventure? Ride A Nepal Bus"