Back on Two Wheels – Barcelona 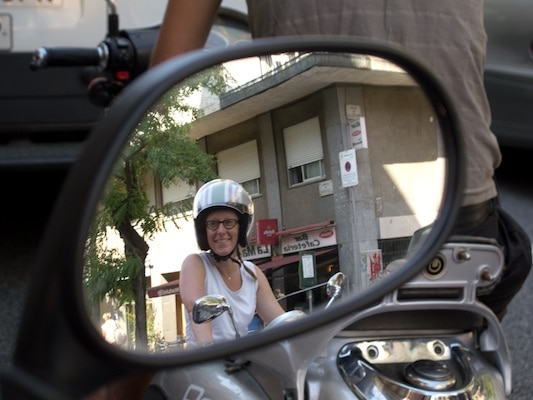 Me on my motorbike in Barcelona

I unfolded my stiff white document for the first time and ran my hand over the glossy picture; it had been tucked away in my passport holder for the last 2 months just waiting to be used. Now I proudly handed over my international drivers license to the young clerk at the motor bike rental agency in Barcelona.

As I became familiar with the neighborhood my cozy Barcelona apartment was located in, I saw a familiar site â motorbikes parked on sidewalks. Barcelona is not a huge city â but it is the 2nd biggest city in Spain with a population of 1.6 million. This was a perfect sized city with a great climate for motorbikes as evidenced by them zipping along the streets. I thought to myself â if I actually lived here I would definitely own a motorbike.

Even though Barcelona has an excellent metro and transit system which will get you about anywhere, I quickly realized it would be way more fun to see the city via motorbike with the wind in my hair zipping down the roadsâ¦just like old times in Vietnam. After all, since I was practically a local living in an apartment in Camp de LâArpa neighborhood, I might as well cruise around the city like a local. Plus, it was a great chance to practice some driving skills before getting behind the wheel for the Mongol Rally! 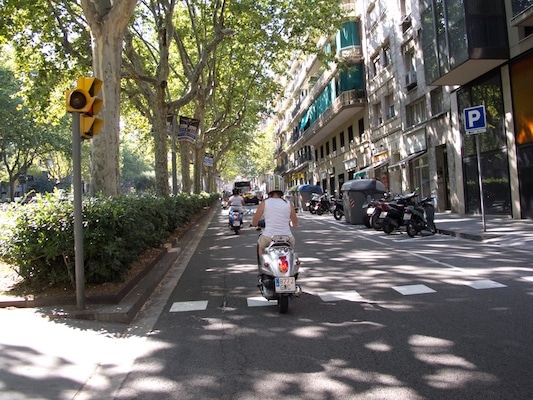 Viator tours offered a 3 hour scooter tour of Barcelona which began in the Barceloneta neighborhood at a place called Cooltra. They not only run Â½ day city tours, but they also rent motorbikes for the day or longer periods.

After a very short introduction to the motorbike, we took off following our guide Miguel. There were only 4 of us so it was rather easy to stick together among the traffic and stop lights. The feel and balance of the bike all came rushing back to me â just like in Vietnam. However the rules were different in Barcelona; namely there were actually rules!

Since there are more cars than motorbikes you have to keep a pretty close watch on the road when you are riding; after all, cars are bigger than a motorbike and they will win. In addition, I was all of a sudden aware of the fact that it was easier to go faster in Barcelona than it was in Vietnam. Saigon was throttled down in speed due to the mass congestion on the 6 million motorbikes on roads â and you were rarely ever able to get up speed at all. But in Barcelona there was plenty of open space on the roads with only stop lights to slow you down. Finally â there were a lot fewer reasons to use a horn , but I found myself with my thumb on the horn button poised out of habit.

We made 4 stops along the tour. The stops consisted of quickly parking the bikes, Miguel walking us to the site, and then he told us a little about the history. It was very short and sweet, but useful. 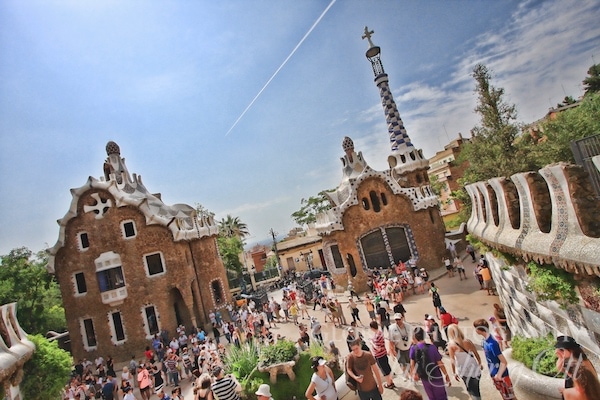 The rest of the time we drove around the city following Miguel through every light and turn. The traffic was never too bad and I found the whole driving process really relaxing. I even had time to look around me and see the sites as I zipped by.

Overall I would recommend the motorbike tour as a unique way to get around Barcelona and be a part of the local culture. I was able to get a feel for the city outside of the metro, feel some freedom, and occasionally go fast! However I canât say that the tour is without some needed improvements; if you do go, be aware of these things which were disappointing and slightly annoying to me:

â¢ Very slow to check in – waited an hour (and there were only 4 of us total). The office and paperwork were extremely inefficient. A case of too many employees and no one knew what to do.
â¢ They didn’t really have a great way to teach new people how to ride except for on the sidewalk. (and the other business owners were not very happy about that!). Out of the 4 people who went on our tour, 2 of them had never ridden before. There was very little assistance given in that respect.
â¢ The guide was rather hands off until the tour started. He sat around smoking until the rest of the disorganized staff tried to teach people how to ride.
â¢ I would have liked to have a map of where we were going and a bit of a initial introduction before we took off.Â  It would have been helpful but the only instruction or conversation we had from the guide prior to taking off was to try to line up two by two when stopped at a light and if we got separated to stay where we were and the guide would come and get us.
â¢ It would have been nice to use the bikes to get out to sites that were a bit further away and not as easily reachable by metro. La Sagrada Familia, the number one tourist stop in Barcelona, was one of our stops yet I would have preferred to skip it and go more remote with the bikes.
â¢ The bikes were ok and basic. However, they asked my friend to take one that died at stop lights since he was more experienced with riding. In my opinion you should never give a customer a bike that has issues no matter what kind of rider they are. The guide should have taken it or simply provide a different bike since there were many siting around. 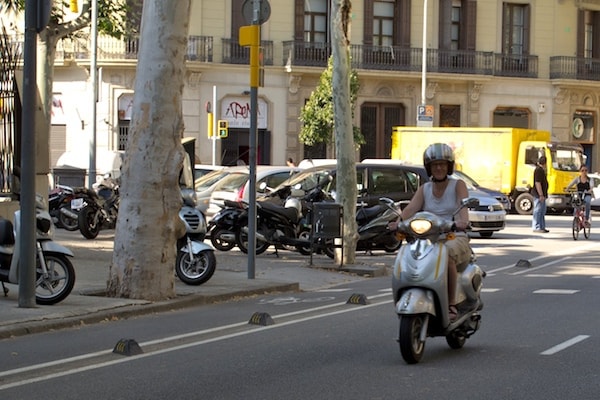 Disclosure: Viator tours hosted me on this Scooter Tour. Oh Barcelona Apartments is hosting my accommodation in Barcelona. However, all of the opinions expressed here though are my own â as you know how I love to speak my mind!
Oh yesâ¦.and one more thing â the pictures provided were from another traveler on the tour, Brooks. There was no way I could have ridden the scooter AND take photos of myself!

4 Responses to "Back on Two Wheels – Barcelona"