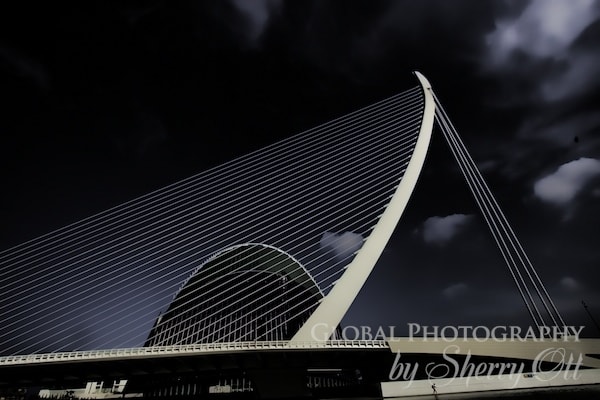 The City of Arts and Sciences

How many times have kids, teenagers, and college students sat through a calculus or science class and thought âWhen will I ever use this in real life?â However I can safely say that architect Santiago Calatrava must have received straight Aâs for such classes, in addition to his art and design classes. As his teacher was going on about quadratic equations and finding volume of irregular shapes, he actually took notes. Through his skills he put Valencia on the pulse of art, science and tourism when he translated his visions into the City of Arts and Sciences.

From the moment I arrived in Valencia Spain I realized even though this city was old and traditional, it was scientifically complex. I peered out my bus window and the modern buildings immediately grabbed me and my face froze in amazement; they were stunning and like nothing I had ever seen before. We were driving by the City of Arts and Sciences, a whole complex of modern buildings that canât help but to leave you in awe of the science and mathematics that made it all possible.

I was never that great in math and science, but walking around the City of Arts and Sciences had me thinking about how some professions such as Architects and Engineers do actually use it in their every day work. And if it werenât for math and science these buildings wouldnât exist. For example, suppose you’ve designed a building that you want to support on a series of concrete columns. If you wanted to place the columns every twelve feet, what diameter columns would you need to build to support the structure? How about if you wanted to place the columns every sixteen feet? Now what size columns would you need? You can’t just make buildings that look good. They’ve also got to stand up. You need to know the maximum force each material can take, and how much force you’re actually putting on it.

Just look at all of the curves on the Palacio de las Artes – thatâs calculus. Numbers transformed into beauty. 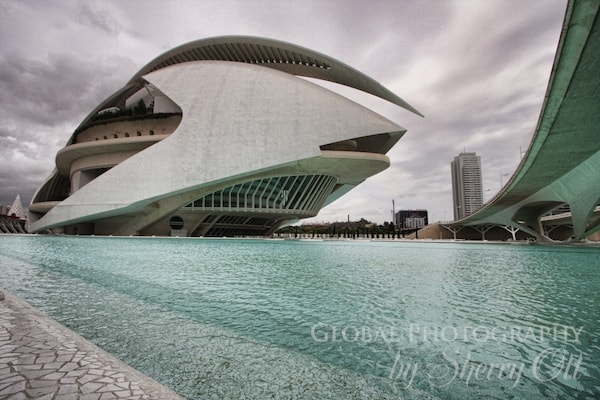 Fluidity - Lines and Curves and Water 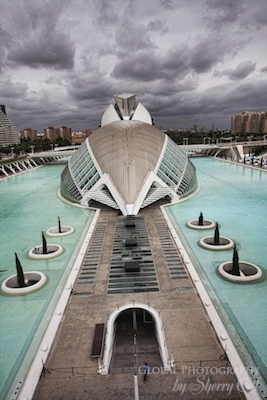 Valenciaâs City of Arts and Sciences complex was created thanks to Mother Nature. Following a flood in 1957, the Turia river was diverted along a canal to the south of the city, and the dried-out riverbed was turned into a park full of paths, art sculptures, and the crowning jewel â the City of Arts and Sciences designed by the architect Santiago Calatrava. The buildings all complement each other in design (color, materials, and construction), and are loosely stitched together with aqua blue wading pools which invite you to take a dip (which I didâ¦luckily no authority saw me!)

The complex is made up of LâHemisfÃ¨ric – (Planetarium completed 1998) . The Science Museum (2000), LâUmbracle (Park 2001), the Oceanographic Aquatic Museum (2003), the Palacio de las Artes Opera House (2005), and city continues to add more sleek structures that complement the park with the LâAgora covered plaza set to open soon. As part of a blogger trip to Valencia for the Forumla 1 race I was able to get behind the scenes tours of some of these buildings; my camera was eternally grateful for this. 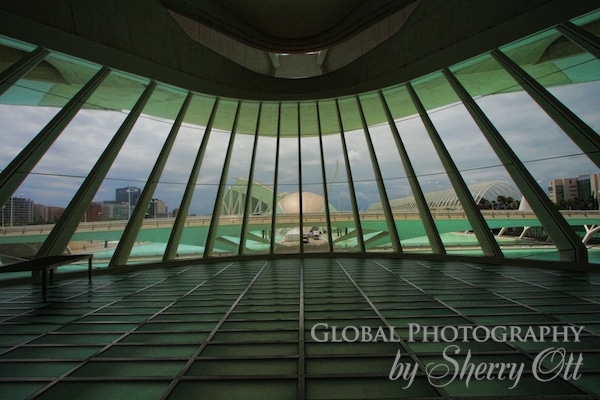 View From the Inside

The Palacio de las Artes (opera house) was by far my favorite part of the complex. It seemed to defy gravity from the outside and from the inside it defied sound. The acoustics in the 4 main theaters were genius as well as the technical designs of the stages which allow for the biggest productions in the world to be hosted there in opera, theatre, and music. Our guide took us through each hall explaining what each one was used for as we sat in the comfortable leather seats produced by the same people who create the leather seats for Ferrari. I thought this an interesting and appropriate fact to share since we were in Valencia for the F1 race. She also took us to all of the open areas, gardens, and views explaining the architecture and design. Each open space displayed a beautiful symmetry highlighting once again that math (specifically geometry) can be art. The building was a maze of stairways, theatres, open space, elevators, and surprising views. 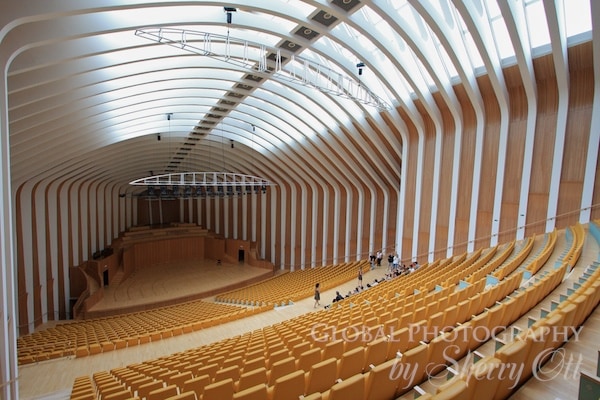 One of four the massive theatres 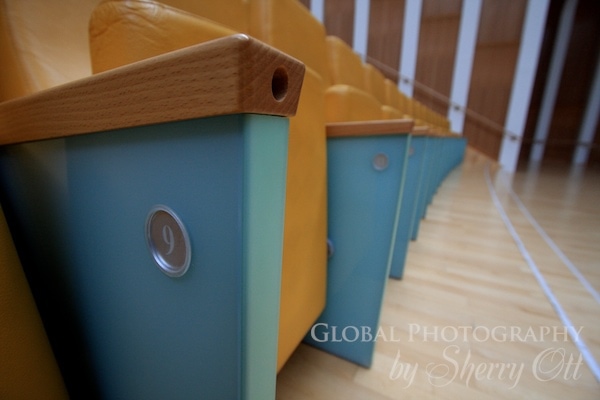 The most impressive part of the structure is the roof, which is ironically referred to as âthe featherâ. This massive structure weighs over 3,000 tons and is covered by white ceramic tiles. As I stood and looked at the roof, which seemingly hovered over the building, I thought about all of my old high school and college math teachers which I ignored. A heartfelt âSorryâ goes out to them!

The Oceanographic is the largest aquarium in Europe and contains over 42 million liters of water and approximately 45,000 marine animals. Seriously â who is responsible for counting these? It covers all the worldâs marine ecosystems connected by long âunderwaterâ tunnels. The tunnels themselves are scientific wonders. As you walk from the Mediterranean to the Tropics you do so with sharks and stingrays swimming over the top of you not to mention thousands of liters of water pressure. 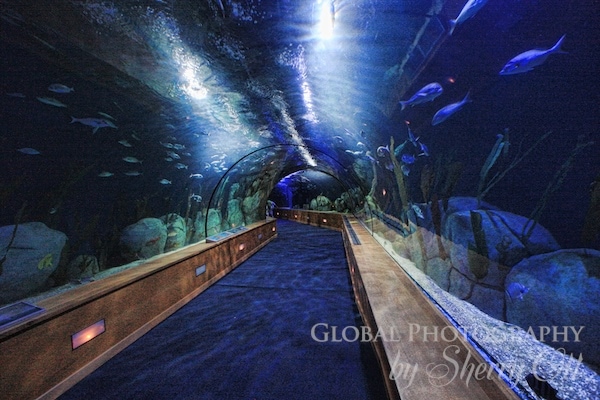 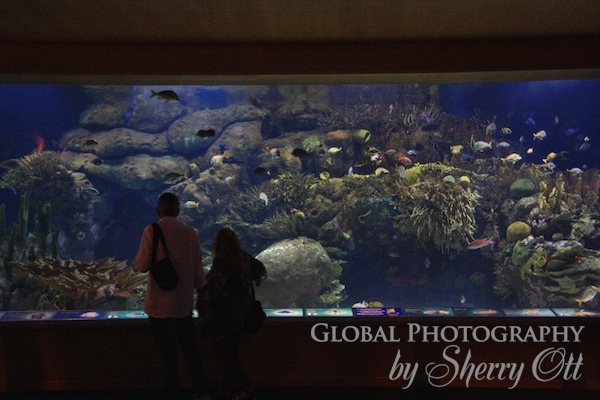 This is certainly a unique view of life under the sea; however, we were able to see if from a different perspective in our tour â from the top. They took us through the inner workings of the aquarium and we walked on catwalks suspended above the shark tanks and watched as they slinked around the tunnels and people below. A truly unique perspective and a bit nerve racking as the cat walks were slippery and one false step may leave you in a panic. They assured us that if we fell in weâd be fine, but I couldnât get the Jaws music out of my head as I gingerly placed my feet on the slippery catwalks. 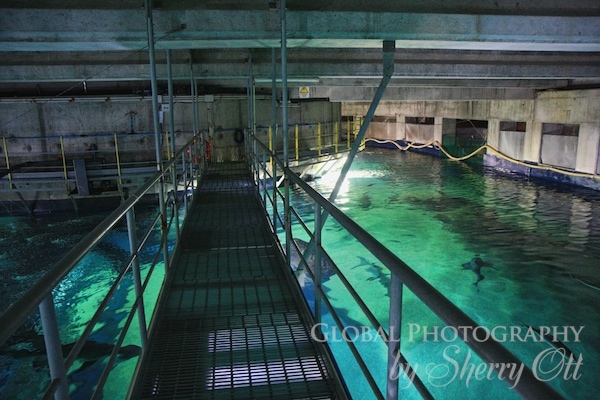 One slip and you are swimming with the sharks 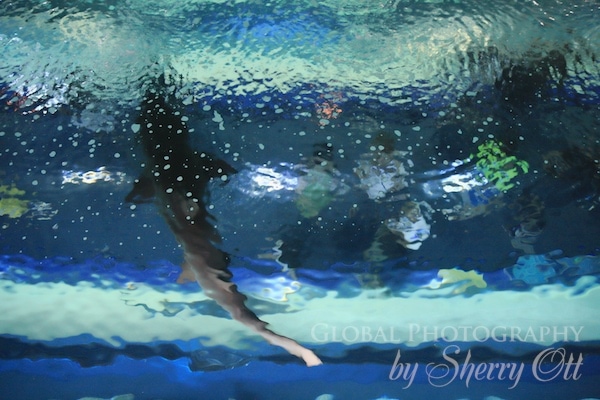 Above the tunnel - look closely to see the people below

The day was filled with symmetry, physics, acoustics, lines, curves, and complex equations. The result was a lot of great photography as well as a newfound appreciation for mathâs influence on art. All of this modern architecture and high tech science amidst one of the old cities of Spain make Valencia a city you shouldnât miss if you are in Spain. And if you are a math geek â then you must stop!

To see all of my photography from these architectural wonders View my albums:

City of Arts and Sciences

Disclosure: Â My trip to Valencia and surrounding areas was provided by Tour Spain and Valencia Tourism. Â However, all of the opinions expressed here though are my own â as you know how I love to speak my mind!

7 Responses to "Numbers Into Beauty – Valencia"