Kandy and A Sweet Tooth 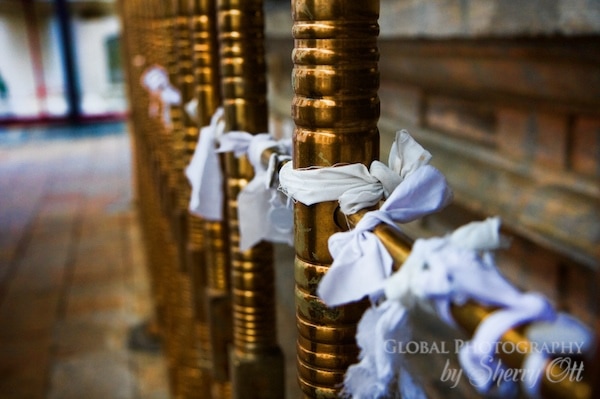 Recently I was riding in the car with my sister and my niece when my niece announced out of the blue how much she loved going to the dentist. My sister shot me a mean glance as if this confession were somehow my fault. After all, when I was a kid I used to purposefully talk about how much I loved to go to the dentist just to make my sister and brother mad and hence make my mother love me even more. If this was my nieceâs goal â I donât think it was working. However I smiled and used the opportunity to tell her all about the famous tooth I visited in a town named Kandy in Sri Lanka. How fitting that a âsweetâ town like Kandy was the home to Buddhaâs tooth.

One of the most famous temples in all of Sri Lanka is located in Kandy, the Temple of the Tooth (Sri Dalada Maligawa). It was built in the 17th century and proudly boasts it is the home of Buddhaâs tooth. The tooth is kept in a two-story inner shrine fronted by two large elephant tusks. The relic rests on a solid gold lotus flower, encased in jeweled caskets that sit on a throne. Basically, it is safely tucked away in a gold casket to be revered by all Sri Lankans. I think this description pretty much gives you an idea of how important this temple is to Sri Lanka:

âThe temple of the Tooth is the prime monument, the supreme edifice not only of the Sinhalese Buddhist populace of Sri Lanka but also of the Buddhists all over the world. It is within this magnificent temple that sacred Tooth relic of Buddha (Danta Dhatu), the palladium of the Sinhalese nation & Buddhist faith is enshrined.ââfrom SriLankaHolidays.com

This is one sweet tooth.

According to legend, the tooth was taken from the Buddha as he lay on his funeral pyre. It was smuggled to Sri Lanka in 313 AD, hidden in the hair of Princess Hemamali who fled the Hindu armies besieging her fatherâs kingdom in India. But for mere mortals the important thing to know is that the temple is really beautiful and is most definitely the highlight of Kandy town. Itâs situated on the lake and has a little moat wrapping around the outside which doesnât really deter anyone or any monkey; but it makes it look lovely. 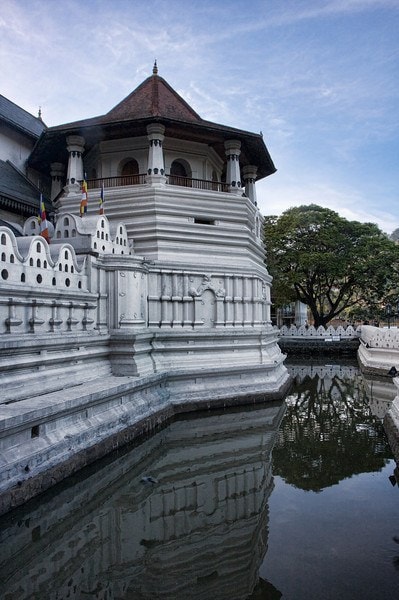 A Moat ‘protects’ the sacred tooth

Be prepared to not only give up your shoes, but to also give up $10USD each in order to enter the temple. However if you have purchased a very non-publicized Cultural Triangle ticket â then the Temple of the Tooth is included. This all-inclusive ticket is definitely worth looking into if you are traveling throughout Sri Lanka; but good luck finding information on it! After getting your ticket you walk over the moat and into a decorated entrance tunnel called Ambarawa. This deposits you on the first floor of the temple. 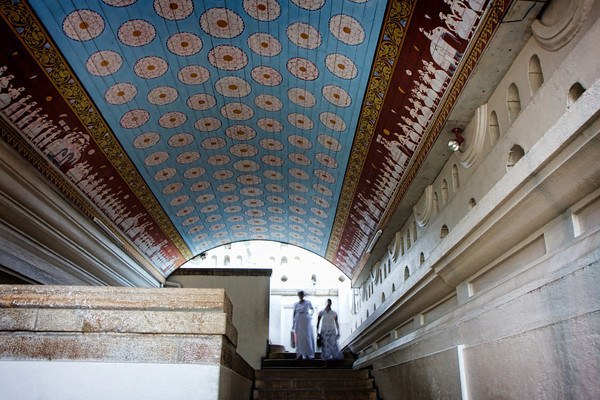 If you want a real cultural experience, then try to attend one of the three daily rituals at the temple on the 2nd floor in which special offerings are made to the tooth and the monks honor it in music. In an effort to avoid the tourist crowds we decided to go early at 7AM, after the ritual. Ok â truth be toldâ¦we overslept. It appeared that many locals stop by the temple in the morning on their way to work to say prayers and leave offerings. It was a fascinating scene to just sit back and watch people quietly and solemnly pour in from outside, stand in front of the alter, put the palms of their hands together, and say their prayers. 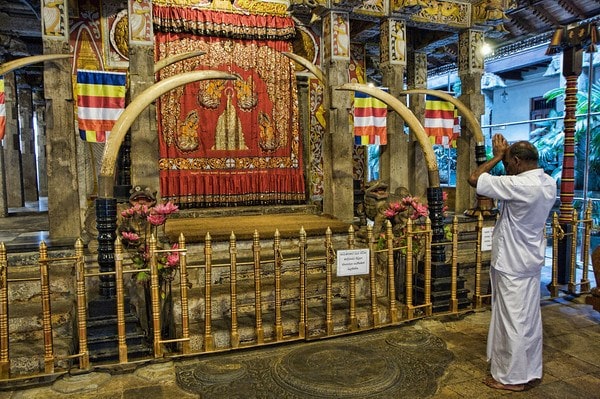 The sacred tooth lies behind the curtain 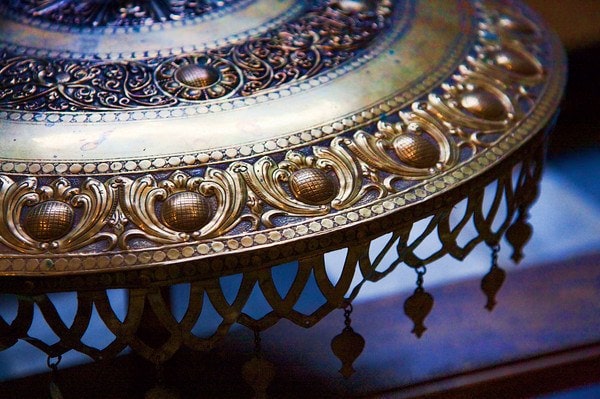 A golden glow surrounds the temple

We wandered around the whole complex doing photography and looking at the various alters, instruments of worship, and architecture. My favorite area was behind the temple of the tooth where there was a Buddhist museum with shiny marble floors, numerous statues of Buddha from around the world, and a soundtrack of chanting filling the long, highly reflective hall. It was lined with paintings which each were a âstory panelâ of the famous tooth and how it came to be in Kandy. 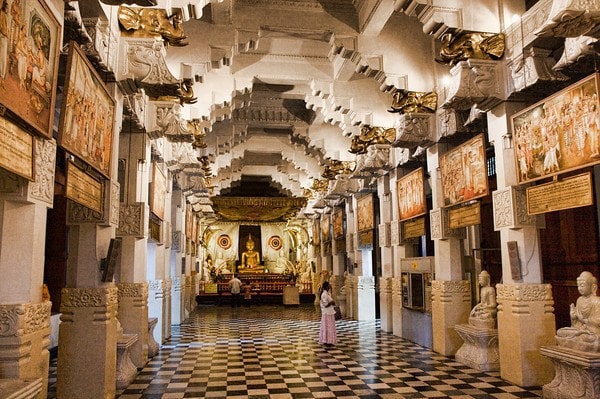 Buddhas from around the world adorn the hall

Even if you donât like visiting the dentist, if you find yourself in Kandy, then the Temple of the Tooth is a must see. No cavities, just one stellar tooth.

5 Responses to "Kandy and A Sweet Tooth"