How to Order and Enjoy Pintxos in San Sebastian

This is my first trip to San Sebastian and I’m confused.Â  People are grabbing food from the bar, walking out and not paying. If that wasnât confusing enough, I watch as no one behind the bar writes anything down or keeps track of anything. I wonder if this is akin to one of those super fancy restaurants when a waiter takes an order for six and never writes anything down. Itâs as if they are showing off their superior memory skills, but it just makes me anxious instead of impressed.

I see someone order a beer, but the beer comes out in a juice glass with only a minuscule amount of amber liquid sloshing in the glass. Plus, there are all kinds of drinks being made that I’ve never seen before (and trust me, I’m familiar with cocktails). And finally I watched stunned as a woman throws her napkin on the floor and walks out as if littering indoors in a restaurant was ok.

The scene at this San Sebastian bar looked like pure chaos. 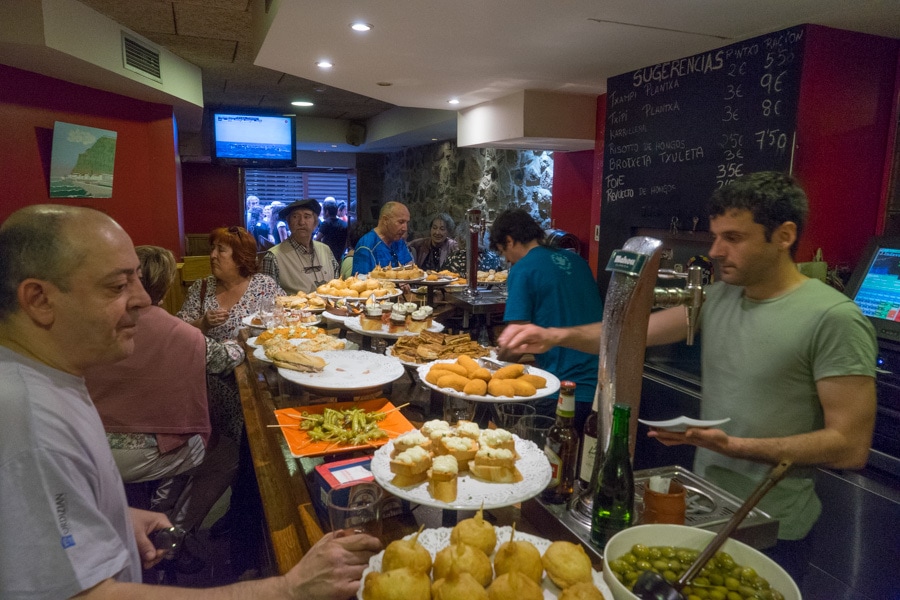 In addition to the weird behaviors, the bars/restaurants were packed full of people as tight as a can of sardines. It was loud and convivial – like a Friday night in NYC’ s Lower East Side. It was intimidating to think about jumping into this food culture; it seemed so foreign to me.

Sometimes eating out at a restaurant isn’t as simple as you think in a foreign country. I thought Europe was pretty easy and similar to the US until I got to Basque Country in Spain and walked into a pintxo bar in San Sebastian.

Learn about Other Odd Food Culture

What to expect in a Vietnamese Restaurant
Read about how I learned how to eat and hold utensils the ‘European way’.
How to eat Pizza like an Italian

What is a Pintxo?

The word pintxo (pronounced pin-cho) translates into spike or skewer. Unlike tapas, a pintxo is normally served with a toothpick or spike. Many are also served on a small piece of bread (but not always!) topped with local ingredients such as fish, ham, and cheese.

Pintxos are usually used for socializing prior to a bigger dinner. It is an appetizer you eat while you drink with friends. There are a number of theories on how they originated, but my guide explained it was farmers who began eating small snacks along with wine throughout the day to give them much needed energy between meals, and so they didnât get drunk.

Bars recognized that if they put out these small skewers of food, people would also stick around and drink more. So it was a win/win for everyone.

I decided that pintxos are really about responsible drinking, making sure you have a little food in your stomach as you start your night out with friends. They arenât full appetizers like we have in the US; they are just little plates of food to tide you over that are also reasonably priced. A pintxo will cost anywhere form 1 to 4 Euros.

It’s all about making friends!

As time went by, the simple pintxos like the Gilda, a skewer of olives, peppers and anchovy, gave way to more sophisticated pintxos. And in a city like San Sebastian where food culture is highly regarded and home to some of the best restaurants in the world, the pintxos continue to be elevated; yet they still keep their price and initial origin of being a small snack with a drink.

A San Sebastian pintxo bar is one place in which is ok, and expected, to just grab food. Bars normally have cold and hot pintxos displayed out on the bar on big platters. You can grab a pintxo directly from the platter, you donât have to ask anyone or âorderâ. This part felt weirdly foreign to me, but itâs what the locals were doing!

At this time you can also order a drink from the bartender; pintxos and drinking go hand in hand based on the history. Itâs normal to simply have a couple of pintxos and a drink at a bar and then move on.

Tip: Always ask for hot pintxos to be heated if they are sitting out on the bar. Or go one step further; mimic the locals and order a new pintxo from the menu and have it made right then and there to ensure itâs the best, freshest pintxo you can have. My guide ignored the ones on the bar and just ordered directly with the bartender so that we got them âfreshâ.

Book your own pintxo tour like the one I took!

Real Estate in a pintxo bar is sort of like real estate in New York City â every little space (no matter how viable) is coveted. My guide actually demonstrated how to work your way through a crowd and slowly acquire space at a bar. It was impressive to watch. Itâs all about getting that first hand in on the bar and then slowly, slowly wedging in further until you can order a drink and grab a pintxo! After you get your pintxo, most people then go outside into the streets and eat and drink since the bar is normally pretty crowded. And, pintxos are meant to be ate standing up.

I think that is what struck me as the most impressive and exciting about the Basque culture, people spilled out into the streets and it gave the impression of a big social party. Young and old intermixed at all hours of the day and night; Iâve never ever seen anything quite like it anywhere else in the world.

The socializing spreads out into the streets of Old Town

Pintxos are meant to be shared with friends

Try to make your way to the bar!

What to Drink With Your Pintxo

Typically youâll see beer, cider, red wine, or white sparkly wine called txakoli. Many times, people order a zurito (small beer) or a Chiquito (a small wine) along with the small pintxo. No matter if you order big or small, it appeared to me that most people drank really responsibly. There were no shots, umbrellas, or mixed drinks. People were always eating food along with their drinks; making it a fun social time and not a frat party.

What About That Napkin Thrown on the Floor?

You are actually supposed to throw your napkin on the floor in a pintxos bar! My guide explained it as a hygiene thing so that people donât leave their dirty napkins on the bar where the other pintxos are placed. So, the dirtier the pintxos bar, the better it is. And itâs not just napkins, at La Mejillonera, where the specialty is mussels, you throw the empty shells on the floor in a special little trough that goes around the base of the bar floor.

When you are finished having a couple of pintxos and a drink, just wiggle your way back up to the bar and tell the bartender what you had and pay. Yes, thatâs right, pintxo culture is about being loyal and telling the truth. This honor system for pintxos in San Sebastian is a key part of the culture. Only tourists and rookies pull their money out and try to pay for each pintxo or drink as they go.

7 Pintxos You Must Try in San Sebastian 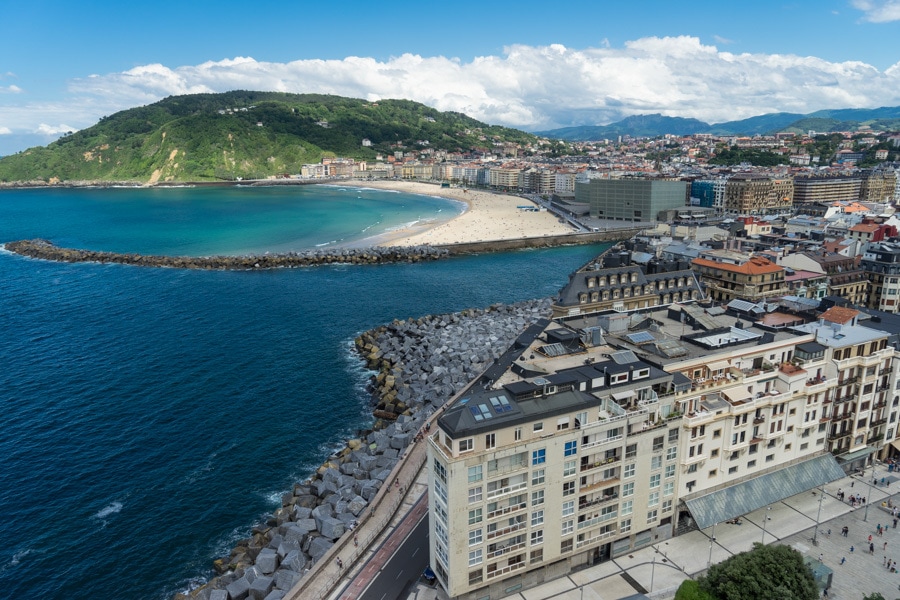 There are many reasons to go to San Sebastian, Pintxos are just one of them! 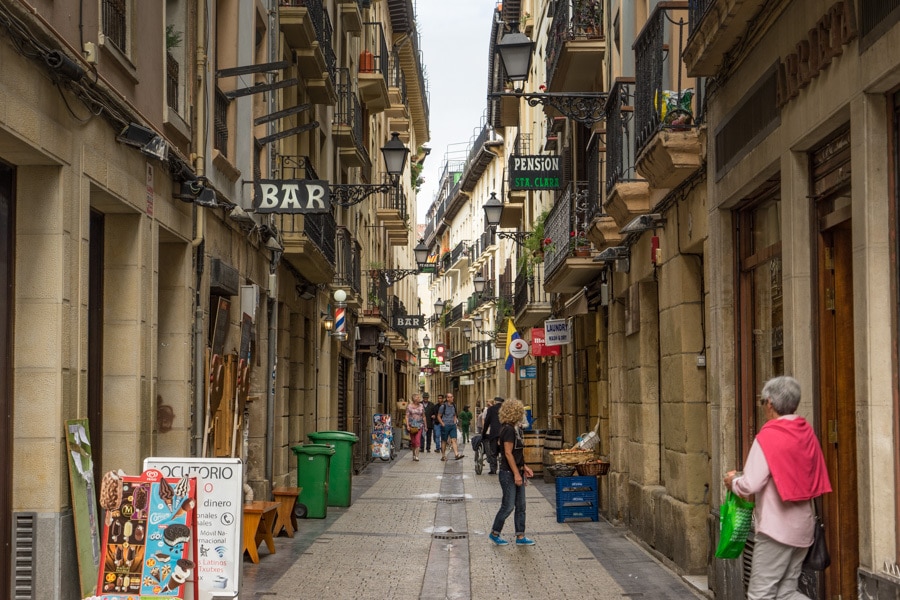 The streets of Old Town San Sebastian…littered with bars!

If Basque Country is the home to the pintxo, then San Sebastian Old Town is pintxo mecca. There are 246 bars/restaurants in Old Town; the highest concentration of bars in the world. My San Sebastian Pintxo Tour took me around to a number of bars to get a feel for the culture and the food.

Here were a few of my favorite pintxos I tried!

Croquettes in Spain are like cheese sticks in the US. They are a delicious fried roll with meat or seafood inside with bÃ©chamel sauce. Itâs a great snack. However Bar Txuleta elevated it to a whole new level when they put Tbone steak inside the croquette! 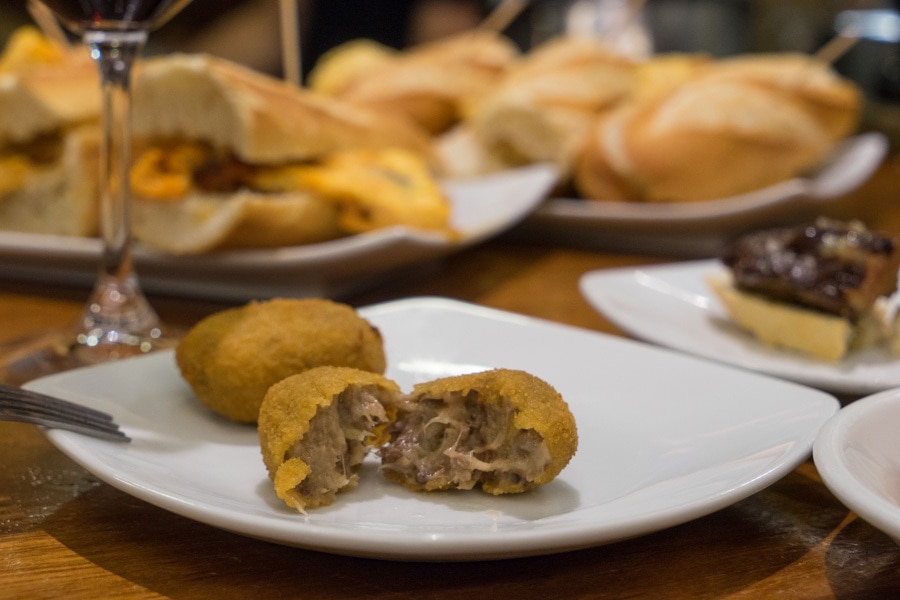 The Gilda started it all; a simple olive, pepper, and anchovy on a skewer. The Gilda gets its name and flavor inspiration from the Rita Hayworth movie, in which the Spanish-descended actress plays a bold and saucy femme fatale. Youâll find this classic all over San Sebastian. 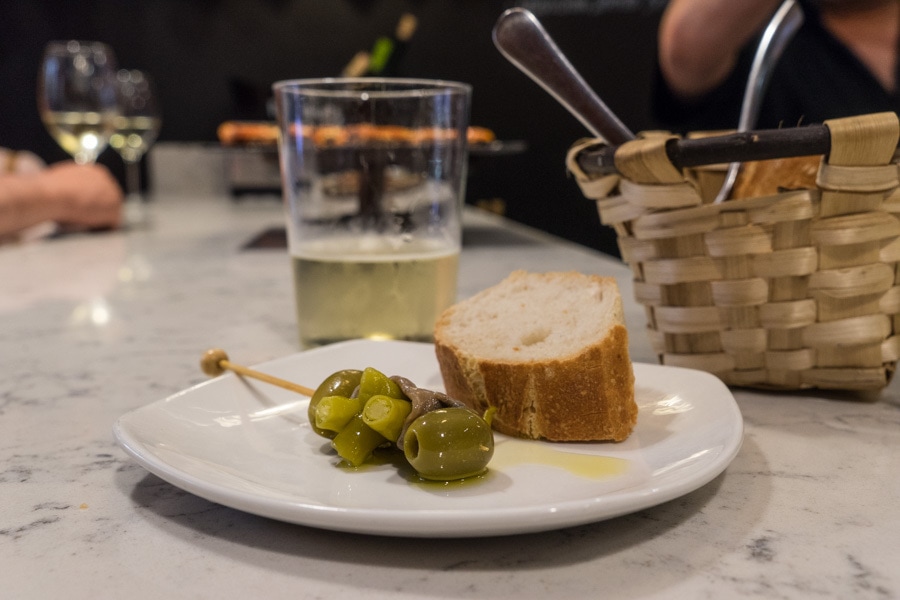 Gilda – the one that started it all…

When in Europe, eat foie grasâ¦nuff said. Another specialty of Bar Txuleta.

If you love mussels, then stop at La Mejillonera who specialized in mussels and patatas bravas. The bravas were ok, but the mussels (served with a red sauce or sweet onions and vinegar) were the star of the show! 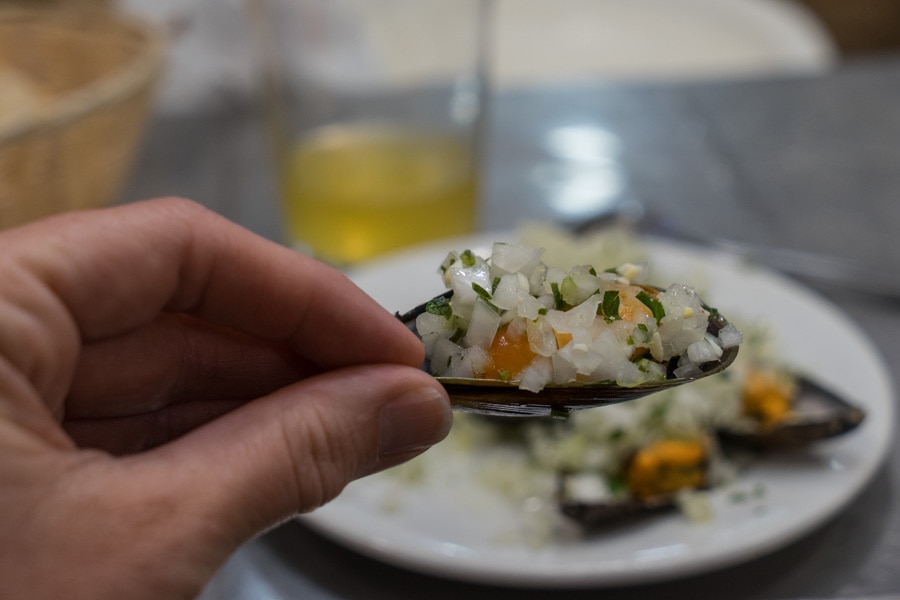 Mussels with onions and vinegar

This is a good example of how simple pintxos have been elevated. This beef cheek at La Cuchara was cooked for hours to make it a delicious, delicate âsnackâ. You have to drink this one with red wine! 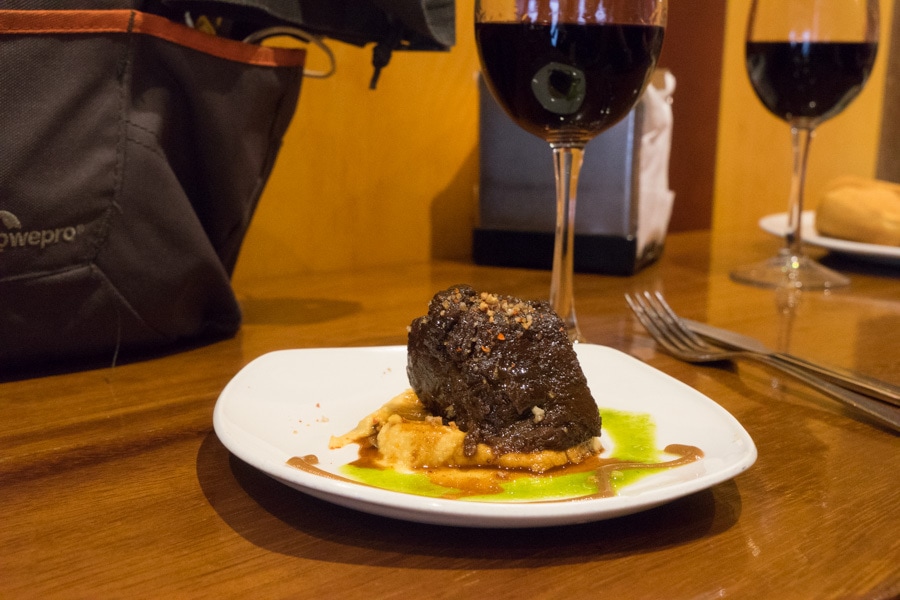 Beef Cheek cooked for hours and served with red wine

Borda Berri Bar called it risotto, but it was far from risotto since there wasnât even rice in it! However, it was delicious highlighting the local cheese of the area; rich and creamy! 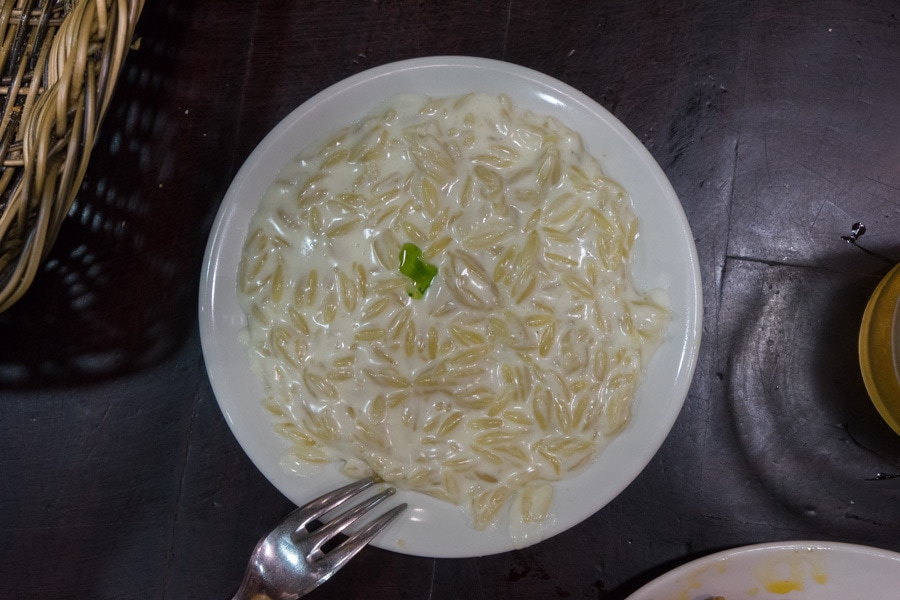 This will ruin cheesecake for the rest of your lifeâ¦so beware â I warned you.

La Vina is an institution in San Sebastian. Sure, they serve the normal San Sebastian pintxos, but people go for the burnt cheesecake. The burned part is around the edges and creates a delicious flavor like a burnt marshmallow. But the real beauty is the cheesecake itself â part crÃ¨me brÃ»lÃ©e and part cheesecake â a match made in foodie heaven. Itâs not super sweet like American cheesecake, but it is rich so order a glass of sweet Sherry to drink with it!

Cheesecake with a glass of Sherry, eaten outside..like the locals

There is no longer any reason to be intimidated by the Pintxo San Sebastian food culture. Go forth to eat, drink, and socialize with the locals! 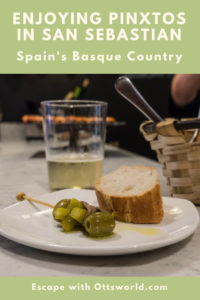 Want more handholding? Take a pintxo tour to get yourself started! I always say that taking a food tour the first day of a vacation in a new place is the best way to get to know a place.
Devour San Sebastian Food Tours