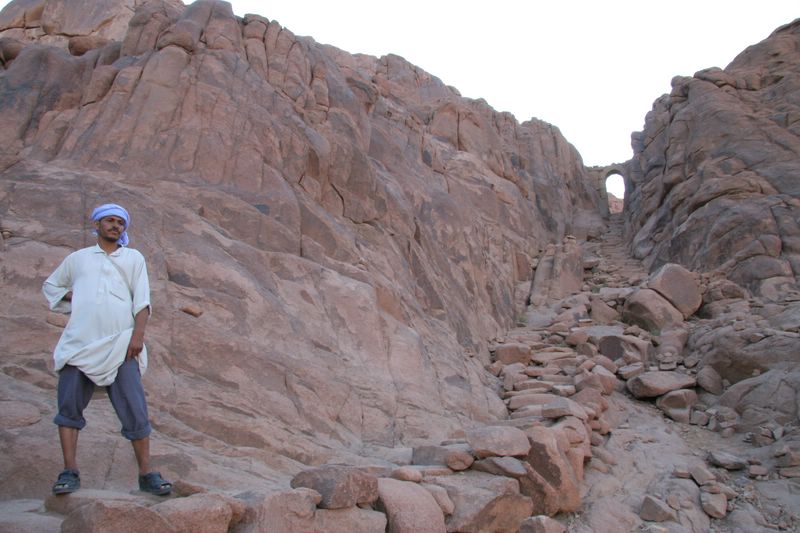 The Red Sea was next on our Moses Tour. This was my favorite part in the movieâ¦the water even looked red in the TV version â and Charleton Hestonâs ability to part it was truly a special effects miracle! Woohooâ¦Red Seaâ¦here I come! We crossed into the Sinai region of Egypt by ferry from Hurghada (unfortunately no one knew how to part the sea and simply drive to Sinai) then we drove way north to a little white sand camp called Sawa. I think it stood for Sand Around Whole Areaâ¦as there was no escaping the fine, white sand. This camp was remote â not necessarily because it was in the middle of nowhere, instead it had no electricity except for 4 hours of generator in the evening, no fresh water (salt water showers), shared bathrooms, and a bamboo hut to sleep in with a sand floor, small mattress and no air circulation. This was roughing it. However â my little sand filled bamboo hut looked out over the Red Sea â and that was all I needed. I could see Saudia Arabia from my little sand and ant filled mattress, and I was no more than 300 feet from some of the best coral reef in the world. The place was quiet, and hot, but once I stopped fighting the sand, I enjoyed it. I was even able to fit in a morning hike through a nearby cannon called Color Canyon.

Color Canyon was a treatâ¦.it was spectacular. The wind had formed the sandstone into a canyon â sometimes wide, sometimes very, very narrow. As you walked through the cannon and followed the path of the wind, you would see the various types of rocks, colors weaving through the sandstone as if it were a Paint ân-Swirl work of art. The canyon got so narrow at one point that we had to crawl through a small opening blocked by a boulder. The drop was long and luckily we all banded together and helped each other through the small space. As I was trying to slide through the opening like a greased pig, I regretted all of the potato chips that I had been living off of since I had arrived in Egypt! The walk was all the more interesting because one of the men in our group was a High School Geography teacherâ¦meaning I could ask him anything about the rocks and I would get an answer! Archie educated me about the types of rocks, the colors, the and the formation of the canyon â my own personal tutor!

Photo: Hole in the canyon trail that we had to slide through!

That night we watched the sun set over the mountains. As you looked East over the Red Sea â the sunset light bounced off the Saudia Arabia mountains giving the sea in front of you a deep red glow!

Our final pilgrimage on the Moses roadtrip was the rock that started it allâ¦Mt. Sinai. We left the Red Sea coast and drove into the tourist trapâ¦ummâ¦..I mean holy land. The town and monastery of St. Katherines was teaming with tourists â big tour buses, and tons of video cameras. Our first stop was at the base of a mountain â where Mohammad pointed out a rock formation in the shape of a cowâ¦the golden calf. All of a sudden the vision from the movie came back to me againâ¦Moses coming down from Sinai with a long beard, carrying the holy tablets to find a raging party â a rave minus a DJ – around a golden calf. Apparently the gold from the calf had long ago been stolen â so the rock formation was left. I was skeptical of the stone calfâ¦but who am I to judge. Next we went to the monastery to see the chapel there and learn the story of St. Katherine. Photo: Man playing chess in the dirt with rocks

However â the real draw there was the burning bushâ¦.yupâ¦thatâs rightâ¦.I saw the burning bushâ¦supposedly. Who really knows if that was the bush or notâ¦but it was good enough for meâ¦it looked old. I canât say that God spoke to me â but it was certainly hot enough outside that I thought I was going to burst into flamesâ¦so why not that bush?

We rested during the hot part of the afternoon as we needed to prepare for our greatest âMoses-likeâ adventure yet â climbing Mt. Sinai. What took Moses 40 days to do, we were going to do in 4 hours. I was really hoping and wishing to find a third tablet of commandments. Who says that there were only 2 tables of 10 commandments, maybe that was simply all Moses could carry â maybe he left a 3rd tablet up there. The one that said âThou Shalt Party, Party, Partyâ or âThou Shalt Not Wear White Before Labor Dayâ or âThou Shalt Not Settle on a Boring Marriageâ. We started up the mountain around 4:30 PM planning to make it to the summit by sunset. It was a challenging walk â 3,000+ rock stairs that were relentless â up, up, up â especially since I handât done any form of exercise now for 3 weeksâ¦my ass was burningâ¦it was Godâs Stairmaster.

Photo: Chapel at the top of Sinai The hike was spectacular â the mountain range was beautiful. We made it to the top with plenty of time to see the golden colors of the sunset bouncing off the mountains and the small chapel at the top. I hunted for the 3rd tablet of commandments, but no luckâ¦I guess I would just have to try to live by the existing two tablesâ¦which had me a bit worried. We made it down the mountain by flashlight via the camel pathâ¦and there was no wild rave party waiting for usâ¦just a large dinner buffet and cold showers.

Photo: My jump for joy at the top of Sinai!

During my stay in Egypt â I reveled in childhood memories of my family watching the Ten Commandments â memories that I hadnât thought about for ages. In a way, I suppose it was a spiritual journey for me as those memories are precious. After all, family memories are carved in stone, but they are worn away over time – until something jolts you back to them. My jolt was Moses!