Distillerie Fils Du Roy, A Story in a Bottle

Distillerie Fils Du Roy, A Story in a Bottle

Stories are a way to engage people and have them remember you, your message, or your product in this information-saturated world.

And stories are important in travel too. Iâve spent a lot of time experiencing different tours around the world and have always felt the tour leaders who educated through story were the most compelling to me. So I guess I shouldnât be surprised that storytelling has crept into craft brewing and distilling â right?

Every good story needs a tragedy to get you sucked in. It was the summer of 2011 when Sebastianâs mother and family were sitting around a fire and his mother announced she had just been let go from her long time printing job. She was middle age, near retirement, but yet not close enough to retirement to actually retire. SÃ©bastien Roy told his mother to consider starting and managing her own business.

âYou see too big, we donât have money for that big of business,â his mother replied.

SÃ©bastien did think big, and he also thought a lot about alcohol; it was his passion since he was a kid. At 14, the family bought an encyclopedia set, and as Sebastian was going through it he found the pages on fermentation. It explained how sugar, water, and yeast made alcohol. And when you are 14, learning how to make alcohol is a major discovery! He took a big jar and put in water, sugar, and yeast and put it in his closet – a place his mother would never go. When he opened his closet the next day – he was astonished â he had just created âlifeâ!

He took this knowledge and put it to work for him in college, brewing crazy combinations of flavorful beers; and making a lot of friends in the process. He went to Germany to learn more about beer and there he also learned how to make absinthe. He found that his real passion was spirits, and specifically whiskey.

So when he suggested to his mother in 2011 to start a business of her own in the little town of Petit-Paquetville in New Brunswick, what he really meant was start a distillery business with him. SÃ©bastien is a very convincing person and storyteller, and soon he and his mom did go into business where he saw big, and his mother sort of kept him in check; the foundation of any good business partners!

They laid out a 5 year plan to distill and produce a local whiskey, but in order to fund the long process of making whiskey (typically 5 to 10 years), he creates and brews beer, gin, and vodka too.

“For me I like to create. Every morning I canât wait to open my eyes and wake up to start dreaming.” — SÃ©bastien Roy

We toured the distillery with SÃ©bastien and saw they equipment he and his mother started with and each level of expansion. As he told us the story of making alcohol in his closet as a teenager we were standing in his new giant tasting room facility that would open shortly. The new tasting room was more than 3 times the size of his first little building he started distilling in.

As he walked us through the distillery it was quickly clear just how much passion he had for spirits and beer. We stopped in his whiskey distilling room where we were surrounded by oak barrels of whiskey slowly maturing. Each barrel had chalk writing on the end, each the beginning of a story. 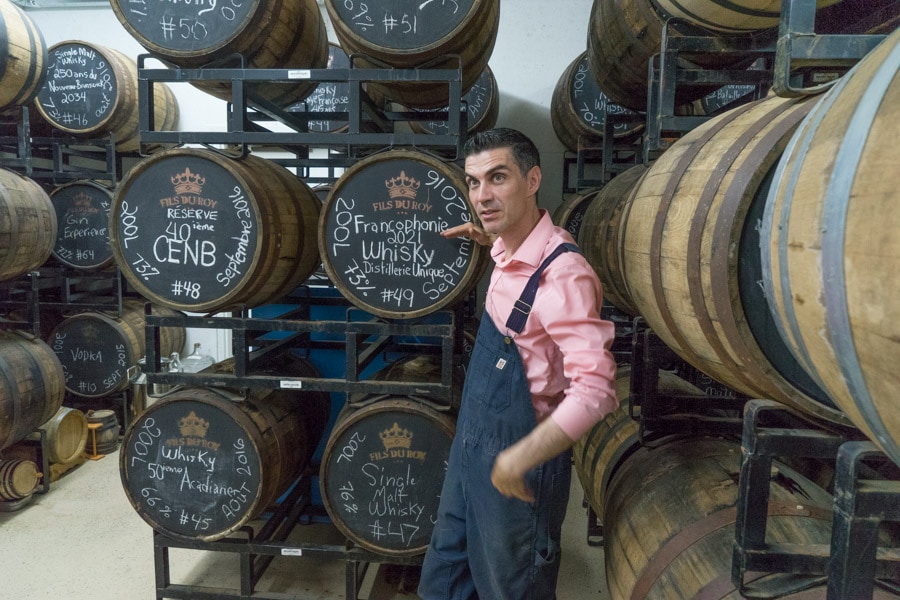 Barrel 49 is for the creation of New Brunswick. It will be ready in 15 years from now in 2034, on the 250th anniversary. There was also a barrel for the French Francophone games in 2021 in Moncton New Brunswick. The Francophone Games brings all 55 French speaking countries together for competitions.
He asked the game organizers for their help in preparing a barrel for the games in 2021. He wanted to orchestrate getting a bottle of water to be shipped to him from each country participating in the games. The water would be used in making the whiskey because the barrel is at 72% Alcohol and it needs to be cut with water to bring it to the legal 40%. In exchange SÃ©bastien will create a subsidy for people who want to speak French for countries where French is in danger.

I knew right then that SÃ©bastien was a clever genius at marketing. Everything he did tied in local ingredients and history to his products. He is patiently waiting for his room of whiskey barrels to further age, but I can assure you that each of the barrels has some story or creative idea behind it.

However until his whiskey is ready, heâs busy producing award winning gins and beers. This man never rests!

Whatâs in a Name?

I have never regretted not having kids, however there is one part that I think I wouldâve loved about having babies, the process of naming them. Itâs a momentous occasion to give something a name; it has to say so much in so few words.

The lineup of Fils du Roy beers and spirits donât just have a name, they have a story behind each name. And the story is something very specific and meaningful to the local history or folklore. 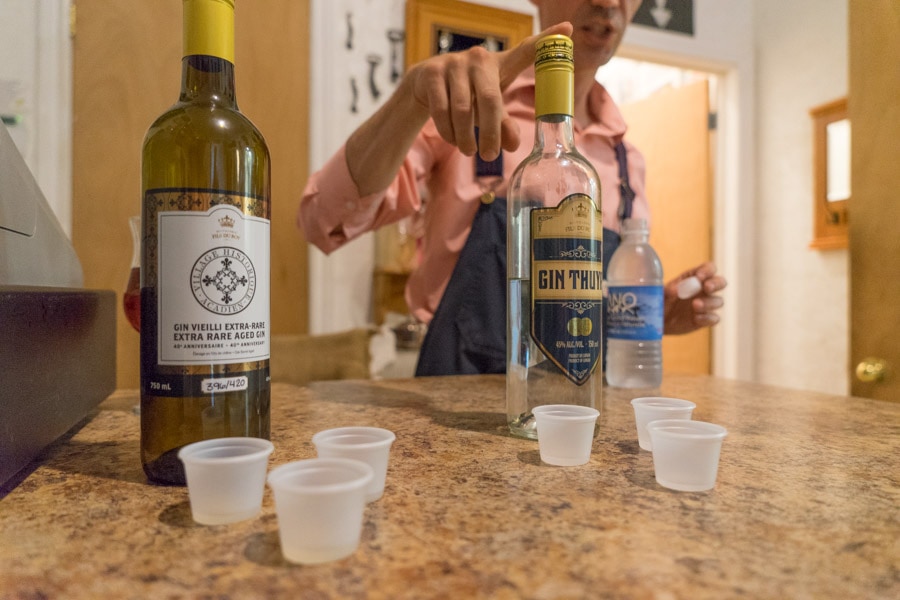 Sebastian walking us through the tastings. 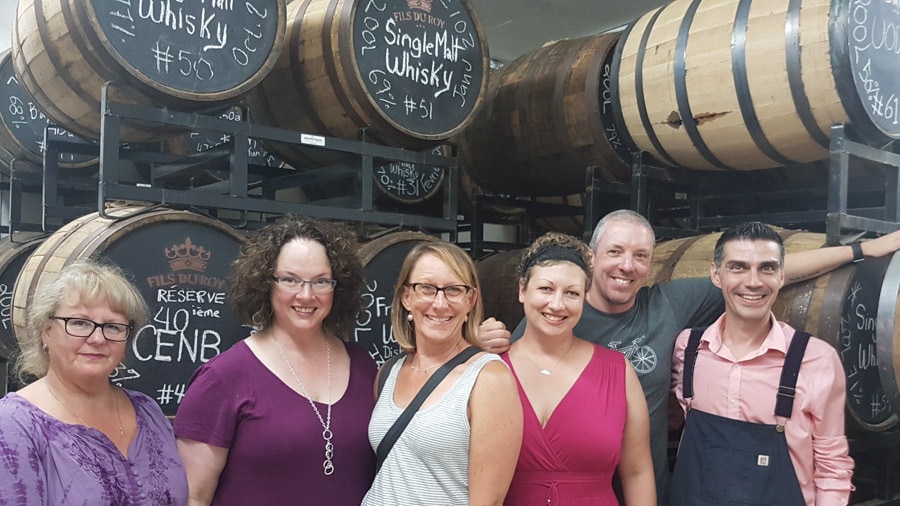 Each story is so vivid that Sebastian has a label made for the product that goes with the story and he has art on the wall mimicking the label.Â  in the tasting room you can easily see the imagery and hear the story as you taste. Itâs a complete Acadian experience.

The Story of Acadian Love Told Through Beer

Evangeline, SÃ©bastienâs beer based on an Acadian love story is a favorite of locals and fans of Henrey Wadsworth Longfellow. Longfellowâs poemÂ  follows an Acadian girl named Evangeline and her search for her lost love Gabriel, set during the time of the Expulsion of the Acadians. Evangeline was to marry her beloved, Gabriel, but they were separated during the Great Upheaval. The poem then follows Evangeline across the landscapes of America as she spends years in a search for him, at some times being near to Gabriel without realizing he was near. Finally she settles in Philadelphia and, as an old woman, works as a Sister of Mercy among the poor. While tending the dying during an epidemic she finds Gabriel among the sick, and he sadly dies in her arms.

On the poem’s 170th anniversary SÃ©bastien produced two beers, Evangeline and Gabriel which are meant to be united together in the same glass. Gabriel is a fruity spruce beer and the Evangeline is more earthy. They touch different places in the tongue but when put together is provides a wedding of taste. 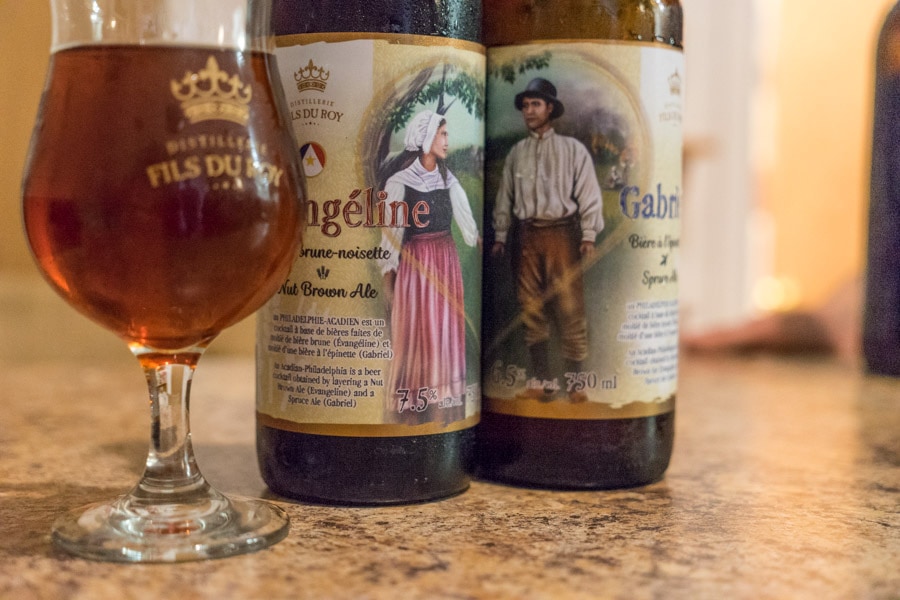 An Acadian love story, better together than apart.

He poured the two beers and had us try them separately, both quite good. I preferred the Evangeline Nut Brown. However when he poured the two together, they had a completely different taste! In addition when you put the two bottles side by side, the two appear to be holding hands again. Cheesey and clever! SÃ©bastien intertwined the tastes, the poem, and the local Acadian history all into these two beers meant to be drunk together!

And finally after all of that talking about whiskey and tasting of beer, it was time for the piÃ¨ce de rÃ©sistance â the gin! Gin Thuya recently picked up a double gold at the renowned San Francisco World Spirits Competition and gold at the International Spirits Challenge in London. And just stop and consider, this is what SÃ©bastien is doing in his âspare timeâ while his whiskey ages! 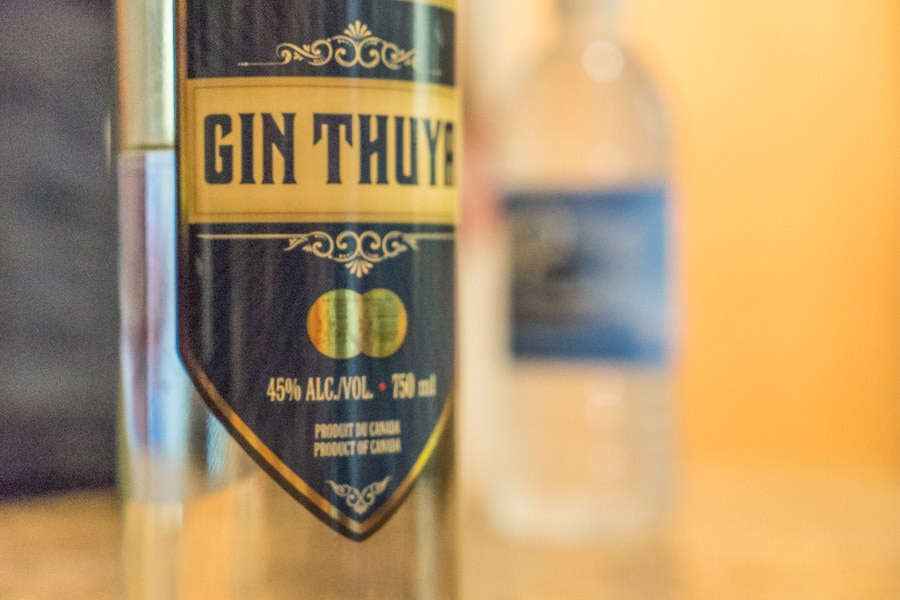 Gin Thuya gets its name from a local ingredient, Thuja occidentalis, an evergreen ingredient with a pine scent and indigenous to the area. According to native legend it was used to prevent and cure scurvy. The gin has a strong juniper notes paired with coriander and cedar flavors.

I adore gin, itâs my favorite spirit. Iâd be happy to drink Gin Thuya with just a little water or ice. But itâs also lovely as a gin and tonic with cucumbers. It already has a citrus flavor to it, so I didnât want to add any more citrus to it and cucumbers seem to be a nice fit. And yes, I bought a couple of bottles to take home of course!

Every business these days says they are âlocalâ, but few really go beyond using local ingredients in their production. However, SÃ©bastien Roy of Fils du Roy Distillery in New Brunswick weaves local into every part of his production; from ingredients, to folklore, to history, to Acadian pride. He, and his spirits and beers, really are an Acadian treasure!

Visit, Taste, and Share a Story at Fils Du Roy

I was a guest of New Brunswick Tourism during this experience, however all opinions expressed here are my own.

2 Responses to "Distillerie Fils Du Roy, A Story in a Bottle"