âA snowflake falls on the side of a mountain in the rugged Canadian Rockies. But that’s not the end of the story. From that moment on, the snowflake will have a whole new life,â Nadine says with a sparkle in her eyes scanning the audience.

The snow is lightly falling around her like feathers from the sky drifting down ever so slowly creating the perfect set. I think about how Iâm like a snowflake, drifting around from country to country in search of a new life and new stories. A smile slowly forms on my face. She has sucked me into her narrative, Nadineâs enthusiasm is infectious, and Iâm hanging on her every word.
âIt can become the stage for winter animals like lynx and snowshoe hare. It could transform into a delicate feather of hoar frost. Or, it might even trigger a powerful avalanche!â she exclaims with a crescendo. âThe snow is alive, and its dynamic nature affects every plant, animal and the landscape itself.â

I wondered if I should’ve clapped, or shouted out âBravo!â, but itâs too late to think about that as she turns around and plods off into the knee-deep snow towards the forest. Dan and I, her audience of two, look at each other with a shrug and follow her.

As I crunch through the snow trying to get used to the wide snow shoes strapped to my feet, I think about Nadineâs âperformanceâ and realize this was the strangest and coolest opening to any hiking tour Iâve ever done. 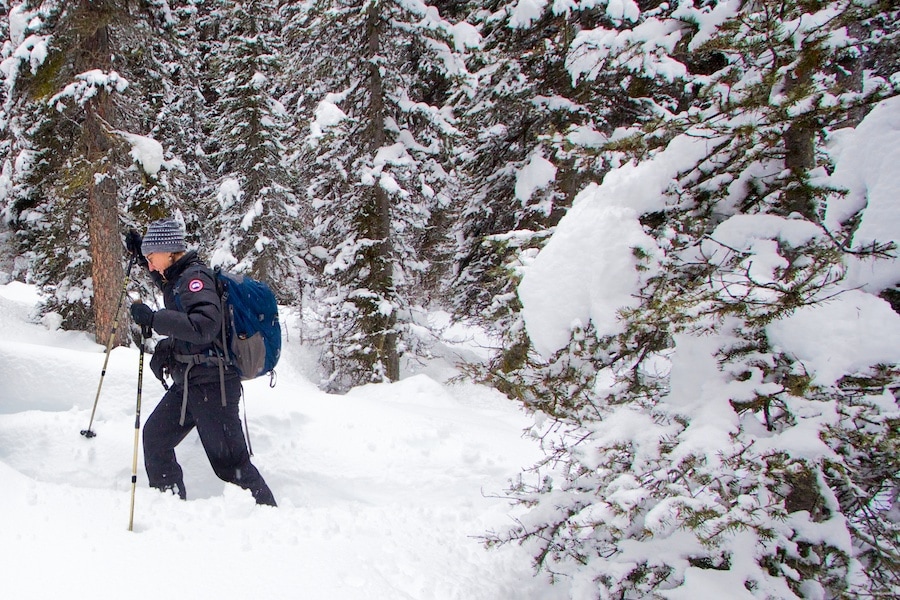 For much of North America, itâs that time of year where we all know snow is on the way. Does the thought make you cringe? Are you already planning your escape to a Belize beach vacation in anticipation of being fed up with the snow and impending dark, cold, short winter days? 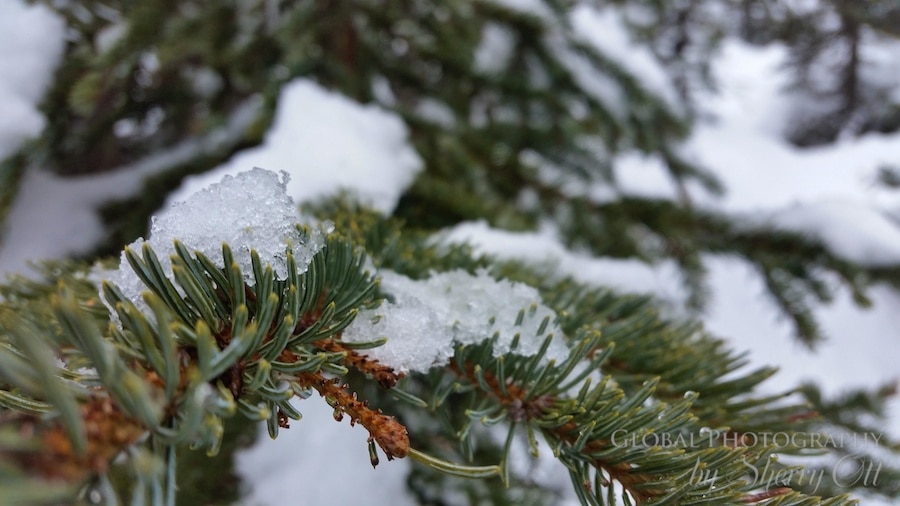 Are you ready for snow?

I normally try to escape the snow if possible and plan trips to be out of the US after the holidays. But this time I decided to take a different view of the snow. Instead of running away from it, I would run into it. I ran to Alberta Canada to try to embrace this thing that so many people dread – winter. And I had found the perfect guide; Nadine of Great Divide Nature Interpretation Tours would be my teacher for the next few hours.

We all know of snow, but do you really KNOW snow? As you visit the Rockies to ski, snow mobile, hike, or dog sled, have you ever thought about what was going on beneath you?

The Complex Layers of Snow

All I really wanted was a little outdoor exercise and a guided snowshoe hike around Lake Louise, but as Nadine opened her bag and got our various tools and books I realized I was going to get much more than simply snowshoeing Banff.

In between snowshoeing, weâd stop and do little experiments to teach us about the various layers of the snow pack. We dropped our poles into the snow to get a feel for the layers. Stopping to rest, Nadine hands us a little shovel. We start digging in the snow as if itâs sand on the beach and we are working on a sand castle. We looked at the layers in more detail digging through the crust layer where the snow crystals becomes round. We dug deeper to the crunchy hard layer and the flakes get even rounder. The next layer was like sugar, with bigger ice crystals that looked like ball bearings. The deeper you go, the more faceting you get and it looks like a diamond. We are taken back to our high school physics learning about the transformative power of heat and cold.

Nadine has the coolest tools, things I havenât seen since I was in a classroom. She hands us a loupe and a little metal plate and we peer at the detailed crystals of each layer and learn why the snow changes so much after it’s fallen. We see the 7 different shapes that a flake can have as it falls out of the sky. Dan hands me the loupe and plate and I stare at the complex snow crystals. I realize that Nadine is like Bill Nye the Science Guy â sheâs somehow made science and exercise fun.

Showing us how to view the ice crystals

We dig snow pits. We look at tracks and figure out how the snow helps or hinders the animals that make them. And we look at snow as a force of nature â it sculpts the forest, powers avalanches, and creates habitat for winter specialists.

âSnow is more complex than I imagined,â I say as I peered through the loupe.

But it wasnât all science, we were there to snowshoe, and we certainly had the perfect day to do it. It had snowed 6 inches that morning and we were blazing our own trail. Going off trail, even with snowshoes, is not an easy process. The first person does all the work, the second person a little less, and third person has it easy. I had a strategy, stay in back and act like I was taking pictures.

Want to know more about Snowshoeing – check out my
Snowshoeing 101 Guide: Why do it, What to wear, Where to go

The scene was picture perfect like we had walked into Narnia and I kept expecting the White Witch to come riding out offering us Turkish Delight. Instead, we had Nadine offer us homemade granola bars and hot cocoa made from real cream â more Martha Stewart than White Witch thankfully.

Dan heading through the woods

A drink to stay warm

Dan and I having playing our best air guitars

After snacks we continued our journey learning about how the living organisms deal with the 8 months of winter in Alberta. The trees and animals have to find a way to deal with the dynamic nature of snow. The trees that grow in Banff are prepared; they are tall and skinny protecting the branches from snapping. The branches slope downward so the snow will slide off like it does on a roof. We play a guessing game of âHow old is this tree?â and Dan and I fail miserably. Surprisingly the Engelman Spruce can live 800 years and the Subalpine Fir can live up to 400 years.

The layers of the snow pack affect the animals too. The tiny animals actually live under the snow pack at the ground because thereâs plenty of air in the sugary snow and itâs 32 degrees â practically tropical. Mid size animals and can be held up by the midpack layer. But heavier animals will break through the layer and not be able to get around, therefore they migrate away for the winter.

How old is this tree?

After 3 hours of stomping around in the winter wonderland around Banff Lake Louise, we had come to the finale. When I pulled into the parking lot that morning, I had the simple expectation of a snowshoeing tour, but Nadine took that expectation, twisted it, and flipped it upside down with a body slam.

Dan and I took off our snowshoes, and bid Nadine goodbye reluctantly. We had been transformed â just like the layers of snow. It was as if she taught us to see nature for the first time. Snow was no longer my enemy, it was a complex winter playground. Iâve never left a tour so giddy and enthusiastic before. This is how all tours should be; exciting, educational, funny, and you should leave with a smile. Nadineâs theatrical storytelling presentation was delivered flawlessly with energy and passion. She gets the Oscar for tour guides in my 9 years of travel by far.Â  BRAVO!

Get out and See Snow Differently in Alberta!

Hiking and Snowshoeing Banff:
Nadine and her team works year around doing hiking, snowshoeing, back country skiing, and nature walks around the Lake Louise area. Hire her to get the stories behind the scenery.
Great Divide Website – www.GreatDivide.ca

Banff Accommodations:
We stayed at Buffalo Mountain Lodge in Banff A beautiful rustic setting above Banff.

I was a guest of Alberta Tourism while in the Banff area, however all opinions expressed here are my own.