Getting Schooled in the Kitchen 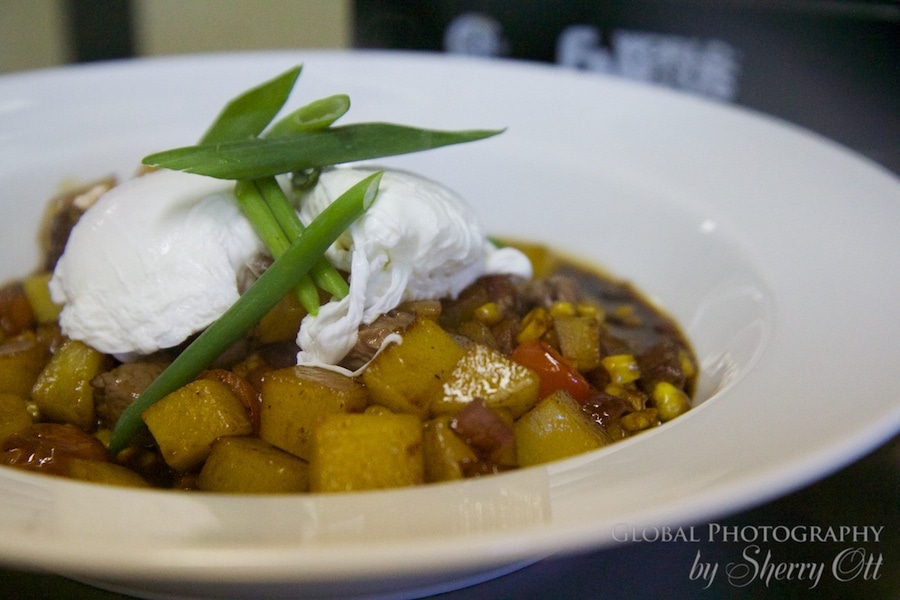 Why does it always look so easy when you watch it on the Food Network? Hell, those chefs can whip up a whole dinner in 30 minutes while talking to a camera and not one swear word comes out of their mouth. How is that possible? For the first time in years I had my own kitchen, AND I spoke the language of where I was living; this was rare, exotic living for me! With my shiny kitchen and time on my hands, I decided I should try to recapture my cooking prowess while I lived in Alberta this winter. 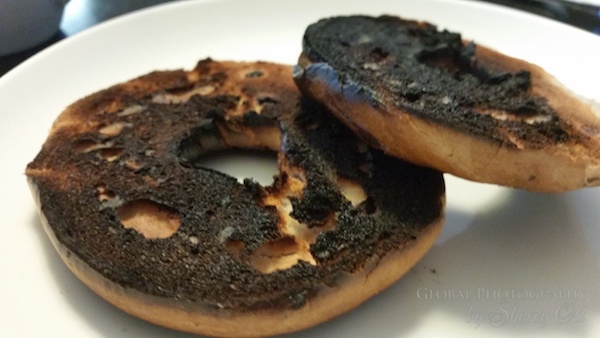 A little overdone…don’t you think?

After 8 years on the road without a real home or kitchen, I had lost all of my cooking abilities. I had spent a lot of time in my 30âs working on cooking skills, buying up cooking appliances and gadgets which now all sit in my storage unit under layers of dust. At one time I really was a decent cook. Really.
Did that sound convincing?

After failed attempts at making bagels in my Grand Rockies Resort condo, I decided I better get some help. I figured I might as well go to the best, someone who not only could help me get my cooking mojo back, but could also teach me about the foods and producers that were local to Alberta.Â  After all, if you are doing slow travel in a location, then why not learn how to cook food unique to the region.Â  In Alberta Canada that means wild game.

Bringing in a Professional

âI need help,â I admitted as I met Chef Jeff MacLean and shook his hand. Chef Jeff has been working as the head chef of Deer Lodge at Lake Louise for 2+ years. He certainly knew his way around a kitchen and could help me. I met him at his kitchen where he decided weâd prepare one of the Canadian Rocky Mountain Resorts (CRMR) signature menu items â wild game hash. I actually had ordered this a week ago when I was visiting the restaurant so I was excited to learn more about how to prepare the wild game.

CRMR was known for their Rocky Mountain cuisine specializing in cooking wild game in Alberta. The company owns 3 luxury lodges and various restaurants around Calgary and they actually raise their own wild game. They have a large wild game ranch with herds of elk and buffalo. These are extremely lean meats, which make them challenging to cook since there is little fat. I was ready for the challenge and hoped I could do better than my burned bagel earlier in the week. 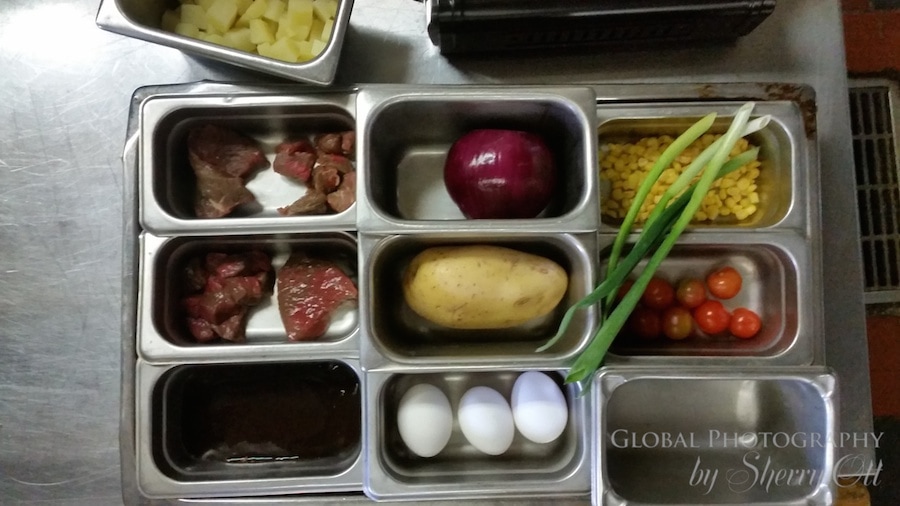 Chef walked me through all the steps of dicing and chopping the ingredients for the hash, and preparing the potatoes and corn. Then we went to the meat. He had an extremely hot pan; the cubes of elk and buffalo hit the pan and made a loud sizzling noise. He moved the meat around quickly and before I knew it he was turning down the heat, and the meat was done. He stressed that you always error on the side of under-cooking exotic game meat as you can always cook it more if you need to.Â  He also went on to show me how to cook up an elk steak which was a bit more complicated than the cubed meat.Â  Overall to make sure big-game meat doesnât dry out, cook it with moist heat or keep it on the rare side.

Finally he taught me how to poach the perfect egg. I had never been able to poach an egg successfully, but Chef taught me tricks with vinegar and gave me tips on how to get the water the right temperature and keep the boiling water moving at the right speed. The eggs came out perfect as I watched him scoop them up with ease and place them over the potato and meat hash. Honestly it all seemed rather simple. I had this, I thought to myself; I was confident this lesson by Chef Jeff had recharged my cooking mojo. He gave me the recipe, and I was on my way to cooking success.

It was time â time for me to recreate this food masterpiece in my own home now. Sure, CRMR had their own ranch where they raised animals, but where exactly do you find wild game meats for sale in Canmore? I had seen the name everywhere around town for the last month, Valbella Meats, and now I finally had a reason to go check out these famous meats and deli for myself. I made the drive to Valbella deli located in an unassuming industrial part of Canmore. Armed with my list of meats and ingredients I needed for my hash, I walked into the little Valbella deli and was swept up in a charming family story of immigration and entrepreneurship.

Valbella is known Canada-wide for its game meats and European style dried meats and sausages. They supply most of the restaurant industry in Banff and Canmore as well as Calgary. I was able to meet Chantal and Jeff, the brother and sister team who is running the family business. And I was also lucky enough to meet the legend himself, their father Walter, while I was there buying meat. Walter broke into the meat business slowly and ingeniously by deciding to sharpen knives for people first before he tried to sell them meat. He won over their trust and eventually started Valbella. What began as a small 1,000 sq.ft. plant has progressed over the last 30 years into a 25,000 sq.ft. production plant overlooking Canmoreâs Three Sister Mountains. Chantal and Jeff now run the business, however Walter is quite a character and itâs absolutely worth it to spend time with him if you happen to see him in the store.

Valbellaâs sausages and famous doubled smoked bacon are worth a stop if you are driving through Canmore. I couldnât help myself from getting extra sausages, and dried meats in addition to the elk and buffalo I needed to make my Rocky Mountain Hash. After all â if my hash was a giant failure, I needed something else to fall back on!.

I was hungry, and ready to get this cooking party started in my very own kitchen. I got out the recipe that Chef Jeff gave me and even tried to do all of the food prep/chopping before just like he taught me. Everything was looking pretty good, I even sipped wine while I was cooking.Â  It was fun to be cooking in my own kitchen again.

My cooking prep…looking good so far!

I was extremely cautious about not overcooking the elk or buffalo, and the potatoes had come out just right. It was time, time to put my egg knowledge to the test. The water came to a boil, I stirred it at the right speed, and then stealthily cracked the egg and eased it into the hot water. Easy peasyâ¦right? It took about 5 seconds for things to go wrong, soon I had lost my Food Network Chef demeanor and was cursing as I threw out my first failed poached egg. Angry with myself, I tried again.
Fail.
Again.
Fail.
Again.
Fail.

My meat and potatoes were getting cold, and my kitchen looked like it had been egged by teenagers. Fuck. Why doesnât this happen to Rachel Ray?

I looked at my dwindling container of eggs and decided that I couldnât afford to ruin any more eggs trying to poach them else Iâd just be eating only cold potatoes and meat for the evening. I had to call it. I had to give up on the poaching.

I had to accept that strangely it wasn’t cooking the wild game meat that led me to failure, it was the simple poached egg.Â  I never saw that coming.

I angrily fried two eggs, and then slid them on top of my game hash mixture that had been plated and waiting patiently for 20 minutes now. I sat down at my table with a glass of wine dejected at my cooking ability. The fried egg didnât look nearly as pretty as Chef Jeffâs soft, white poached eggs in the picture I took in his kitchen.

I poked my fork into the soft fried egg and let the yellow yolk run over the hash mixture to let all of the flavors mix. As I took my first bite, I was reminded, looks arenât everything. Forget the visuals, I gave myself a 7 on taste. I may not be a Food Network Chef – all calm, cool and collected â but I did make it about 70% there. I drank my glass of wine, ate the rest of my Valbella dried meats, and decided to revel in the fact that I came close. After 8 years of not having a kitchen â 70% was pretty good.

Have you ever tried to create a recipe from your travels? Was it a success?

Disclosure:Â  I was a guest of Travel Alberta, however all opinions here expressed are my own.

3 Responses to "Getting Schooled in the Kitchen"