Please Note: The actual timeframe of this blogpost occurred in the end of January. All is currently fine in Lebanon now. My blog runs about a month behind my reality while traveling. So no need to worry about my safety â this is old news!

I looked out the window and wondered if I had boarded the wrong plane and I was actually landing in San Francisco. I quickly shook off my dÃ©jÃ  vu and reminded myself I was landing in Lebanon. The landing approach to Beirut was exactly the same as SFO, flying low over water as if the wheels were going to dip down into it and to your left there were hills with green trees, houses, and building scattered all over them. It was lush. It was clean. It was green. It was Mediterranean. It was the Middle Eastâ¦.surprise.

Yola, the office manager for GeoVisions and IICExchange was waiting for me as I arrived. I had been emailing back and forth with Yola prior to my arrival in Lebanon in order to try to figure out the state of safety with the latest Lebanon political demonstrations. This whole trip was in jeopardy thanks to the latest round of political chaos which I came to learn is quite normal in Lebanon.

âUnfortunately, the situation started to get worse last night and today ,they are arranging a huge demonstration in Tripoly ( North Lebanon) . Although it is very far from Sin -El -Feel where Mira lives & where our office is located , I thought you should know about this critical situation.
As Lebanese this kind of action doesnât stop our normal life ( Jobs ,Schools, Malls & even theaters ) remained open normallyâ

This was the note I received from Yola a week before I was to arrive as things were starting to heat up around the Middle East. Of course after reading the note I was more confused than ever, and I was frantically trying to get the Lebanon History for Dummies â which of course doesnât exist (but should!). I tried to piece together the political history and how it related to present day in order to determine if I would still go to Lebanon or not. She, and GeoVisions, reassured me it had quieted down and the demonstrations were only for a day and located in Tripoli; far away where I would be in Beirut.Â  Little did I know that Lebanon would come to be one of the most confusing countries I had ever visited with regards to history, politics, and nationalism. This was just the tip of the iceberg that I was encountering, and I had a month full of education ahead of me.

The State Department issues travel Warnings when there are long-term, protracted conditions that make a country dangerous or unstable. They suggest Americans avoid or consider the risk of travel to that country. I appreciate and read these warnings carefully; however, you have to really do your research to understand if the conditions are unsafe for YOU. Each situation is different â and you need to know that even though there is a warning issued â it doesnât mean travel to the country is completely out of the question at all. It just means you should be aware. Out of the 32 countries which have travel warnings currently issued on the State Department website â Iâve been to 7 of them. Donât get me wrong â Iâm not suggesting you should go to Libya now, but I have met a number of people who are living in Egypt, experienced the protests, and are fine and I even have a friend living in Tunisia and he has been fine. There are exceptions to every rule. Be smart, do your research, figure out your risk tolerance, and make your own, informed decision.

Lebanon Travel Warning from the State Department:
While Lebanon enjoys periods of relative calm, the potential for a spontaneous upsurge in violence is real. Lebanese government authorities are not able to guarantee protection for citizens or visitors to the country should violence erupt suddenly. Access to borders, airports, and seaports can be interrupted with little or no warning. Public demonstrations occur frequently with little warning and have the potential to become violent. Under such circumstances, the ability of U.S. government personnel to reach travelers or provide emergency services may at times be severely limited.

My process for determining travel safety is certainly not a science and it has a lot to do with gut feel; well-informed get feel. Reading the latest warnings is just the beginning. Next I read up on the news of what was going on in Lebanon in the English newspapers; I find the local papers/news agencies to be a little less one-sided normally. Itâs good to get a localâs take on things instead of just a US Government take on a situation. Finally, I followed up with my contacts in the country and ask them questions about the situation.

I checked the Lebanon travel warnings issued by the State Department and saw there were no changes to the already serious warnings they had about Lebanon; the travel warning hadnât been updated since October. In the last week of January, things had become relatively quiet in Lebanon so I had decided to proceed with my trip there. Things had quieted down in local papers, and my contacts in Lebanon were telling me it was âlife as usualâ. So I went. And here was Yola welcoming me with open arms and a big smile. 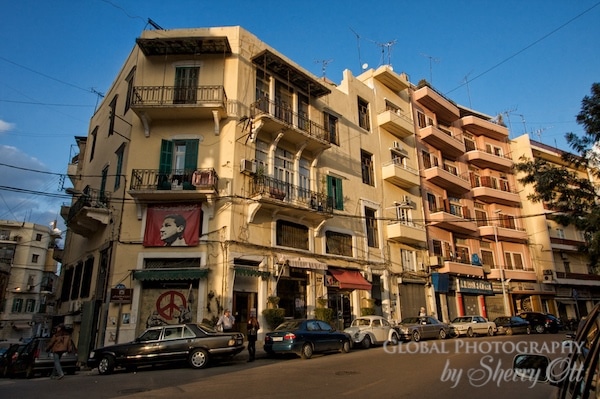 As we drove into the office my first look at Lebanon was stunning. The buildings were tall, more colorful and modern than Jordan; it felt like a big city. The architecture was still really boxy, but you could tell that the quality of living was pretty drastically different from Jordan for the middle class. BMWâs and Mercedes filled the roads. However the thing that struck me first was the driving. It was like Vietnam but with cars â no responsibility for the things/objects behind you or on your sides, absolutely no regard for lane assignments, and a lot of horn use.

My stay in Lebanon courtesy of GeoVisions was to participate in their Conversation Partner program. This is a program where you live with a host family and tutor other organizations in English. The program in Lebanon was still rather new and they didnât have any outside organizations they worked with for tutoring, so instead my role was to go to the office and work with the Lebanese students who were signing up for the summer work program in America. I would be able to chat with them and tell them about American culture, what to expect, and help them improve their English.

After a short stop at the office Yola took me over to my new host familyâs home. I had been exchanging emails with the mother (a widow) of the family for the last month and had the feeling from the emails that she had a very warm and enthusiastic personality. When the door opened and I saw Mira for the first time she squealed with delight and gave me a big hug welcoming me into her home. I felt as if I were a long lost friend, not a stranger. We sat in the formal guest room and she brought out a bouquet of flowers, Diet Pepsi, and a cake; all for my arrival. I was astonished by all of the attention I was receiving, but happily ate up my cake and had my caffeine fix for the day.

The Costaâs were a small, young family made up of Mira (the mother), Maria (14 year old daughter), and Mickey( 8 year old son). Mickey had been diagnosed as autistic and only spoke French.Â  I knew he was very excited to see me, but we were at a communication impasse. However as soon as I had arrived he smiled and shyly handed me an envelope with this adorable message: 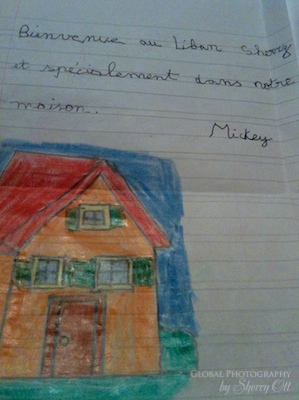 Soon family friends started to arrive and we sat and talked for hours while more and more coffee was served and shwarma was ordered. It was a feast of attention that surprised and delighted me; such a nice welcome into this familyâs home. Finally after hours of sitting, drinking, and talking I had a little tour of the apartment home and was taken to my room. I was surprised to find out that I would be staying in the kidâs roomâ¦minus the kids. I felt terrible for âkicking them outâ of their room, but Mira insisted that this was fine and the 3 of them would all share her bedroom for the month. They had also sent their two cats off to a relative for the month as they knew I was allergic to cats. This was my first taste of how accommodating the Costaâs would be every day, minute, and second.

Overall my entry into Lebanon was filled with attention and kindness. And to think, I just about didnât even come here because of my safety concerns. As I lay in bed falling asleep that night, I knew I made the right decision to come to Lebanon.

6 Responses to "Travel Warnings and Decisions"