Things to do in Dingle Ireland 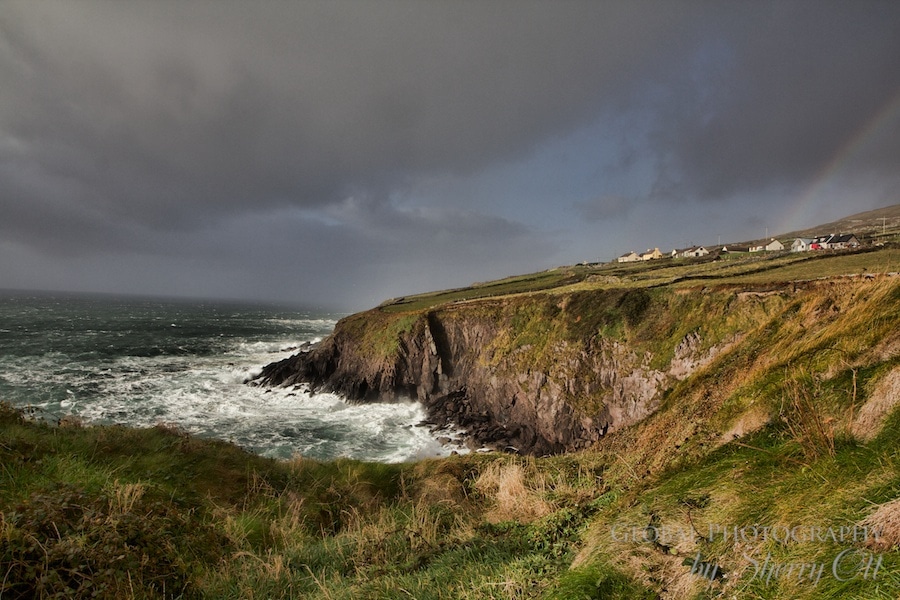 Yes, thereâs a place in the world actually named Dingle. It makes you smile doesnât it? Located in Ireland and part of the Wild Atlantic Way drive, there was nothing in the world that would stop me from traveling to the Dingle Peninsula. It is located in County Kerry; and not only was I excited to simply see the things to do in Dingle Ireland, but I was excited because for the first time on this solo road trip, I was taking the passenger seat.

As part of my pre-trip research on things to do in Dingle (gasp â I seldom do this!), I decided I wanted to do some hiking while in Ireland. I love driving the beautiful coastline, but I was even more excited about slowing down and getting closer to the landscape by hiking.

I had come across a great small local company, Ireland Walk Hike Bike based out of Tralee. I hit it off with Linda, one of the owners, and thatâs how I found myself in her van driving out on the Dingle Peninsula along the Wild Atlantic Way.

This is what I love about the Irish, they are probably one of the most social and welcoming cultures Iâve ever come across.

I could look around, take photos out of the window, learn about what I was seeing, and make a new friend all at the same time â I loved being a passenger for once! Linda entertained me with stories about things to do in Dingle and we spent the whole day talking, hiking, and sight seeing.

Things to do around Dingle Ireland

The Dingle area has been home to various populations for almost 6,000 years. There are over 2,000 archeological monuments on the peninsula making it feel like a dispersed Machu Picchu. There were so many little stops we made and highlights that I decided to simply put together the collage of what I saw on my Day on Dingle.

Learn about the Valley of the Mad

The beautiful valley of Gleann na nGealt was not just a farming paradise, but it was where people with mental disorders came. Miraculously the mentally challenged would come to this valley on Dingle Penninsula and would get better or improve. At first, no one understood why. It was later discovered that the well where everyone drank from was covered in watercress which gives off lithium; and lithium is often used in treating mental disorders.

Drinking the water and eating the watercress supposedly cured a French king who lost his mind in an Irish battle. People traveled to the Valley of the Mad until the 19th century to partake of the water and cress. 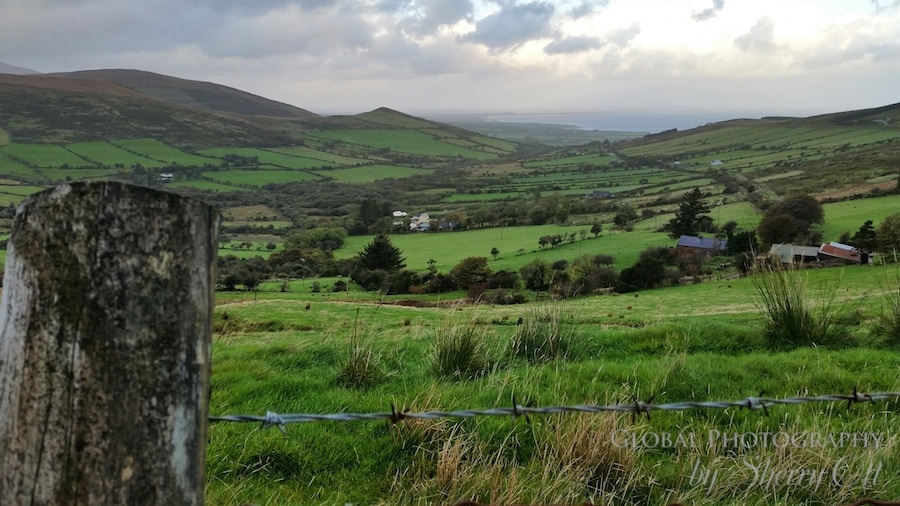 Valley of the Mad

Learn About The Bog Land

This was my first introduction to the famous blanket bogs in Irelandâs peatlands. Linda told me stories of how her family drained, cut, and dried the bog (which they called turf). Then it was used to fuel fires â turf fires. Turf fires are extensively used as they burn well and donât produce a lot of smoke. A fun fact about the bog â itâs a landscape with no oxygen so things are preserved in it â like butter. Yes â bog butter has been around for 6,000 years. Yum?

The village of Annascaul is surrounded by a mythological area of giants and maidens in distress on the Dingle Peninsula. These stories never seem to have a happy ending â spoiler â the giant wins. However one real thing about Annascaul that was happy  was that it is the home town of Tom Crean.

Whoâs Tom Crean you ask? He was a young Irishman who was part of some of the incredible expeditions to South Pole with Shackleton and Scott. He miraculously survived and came back home to Dingle Ireland and ran the South Pole Inn at Annascaul. The sad (and somewhat ironic) ending hereâ¦he ended up dying in Annascaul of burst appendix and couldnât get to medical help on time.

The views were stunning, however hard to appreciate as Linda and I were being pelted by wind while standing on the edge of the cliff overlooking the old Dun Beg fort built in 500BC. She pointed out all of the old construction techniques of such forts as the well-known beehive huts. The fort was really the last defense against intruders â as the only place left to go was over the cliff and into the Wild Atlantic 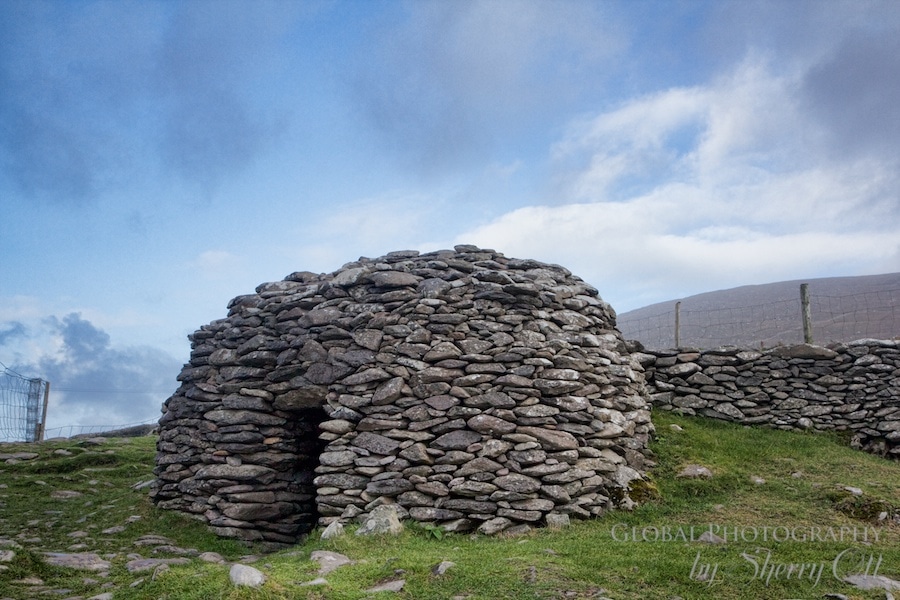 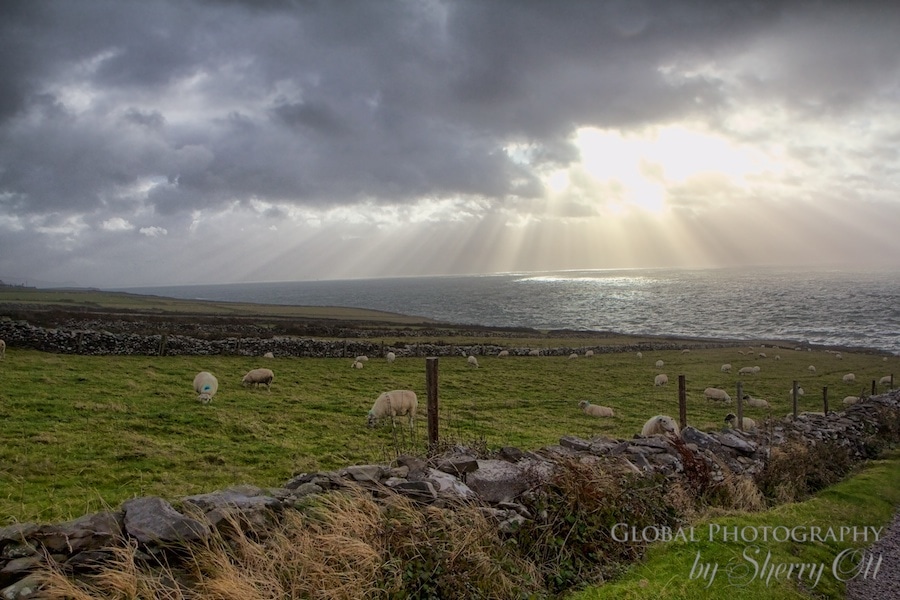 Sheep graze near the cliffs at Dun Beg Fort

It looks like a weird upside down boat, but is used to be a house. Linda showed me how you can skip the visitor center and go in the back entrance that leads right up to the house. The construction was impressive â but my favorite part of the Gallarus Oratory was the legend associated with the house. If you go in the back way through the east window and then come out the front west door (the only two openings) they say it means youâll get married in a year. One problem â you had to be itsy bitsy tiny to fit in that back window just proving that apparently plump people donât get married. 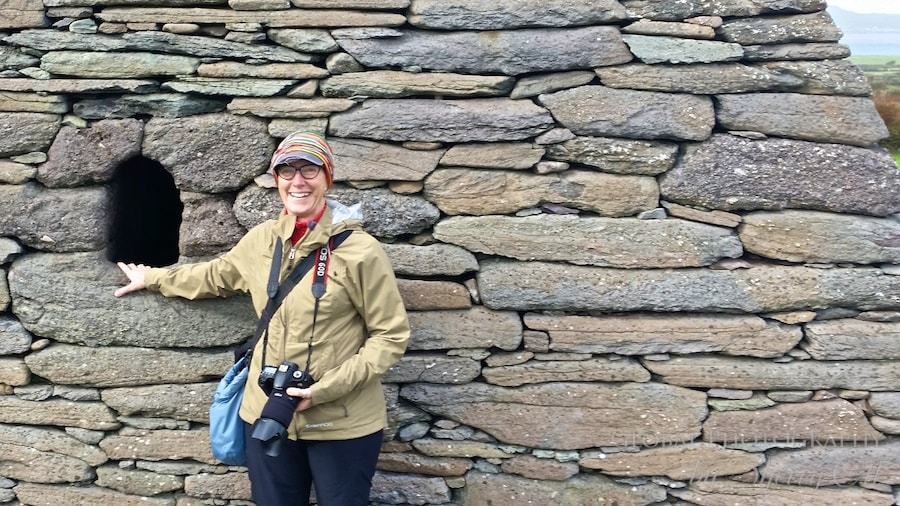 Could you fit through this window at the Galllarus Oratory?

The Dunquin Pier is maybe one of the most photographed places in Ireland â that is if you can find it. Thatâs why you need Linda to show you! You wonât notice it from the road, Dunquin Pier is situated at the northern end of a small secluded bay surrounded by rocky cliffs. A narrow meandering road leads down to the pier. Parking for the pier comprises of a small section of off road parking and ample verge parking along the road. Linda held on to me as I leaned over the edge to get the picture! 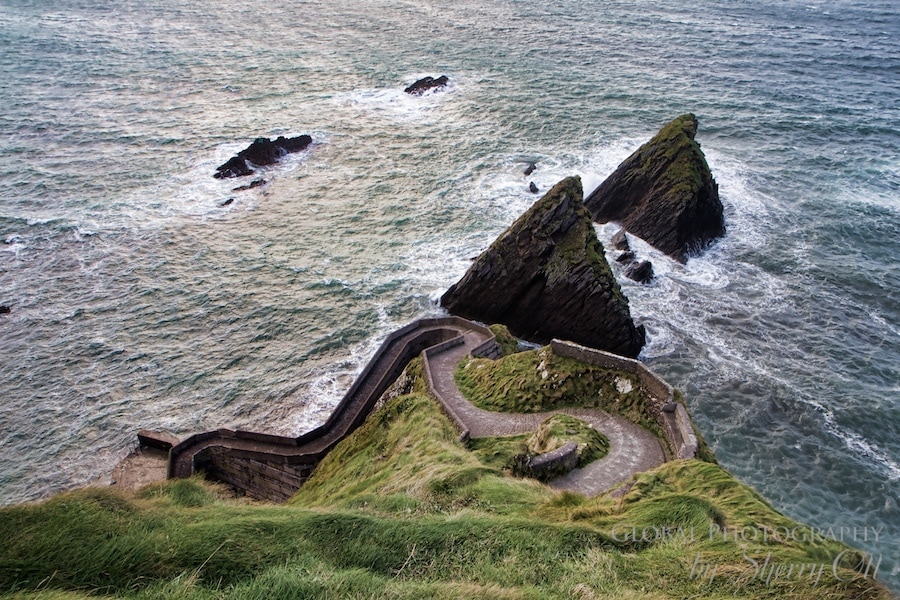 Whatever you do â donât miss Slea Head Drive where you’ll find gorgeous views in every direction. Linda dropped me off to hike along the coast for a bit by myself. Not only was it beautiful, but it was also a quite famous area. It was where the opening scene of the movie Far and Away was filmed and scenes from Ryanâs daughter. In fact â the old set from Ryanâs Daughter was still there â abandoned and creepy â but fun to photograph. 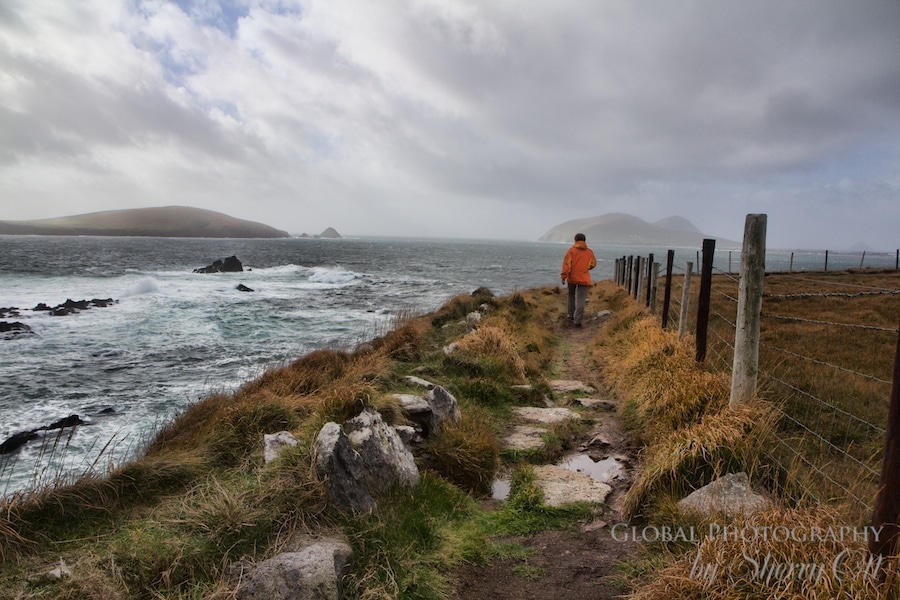 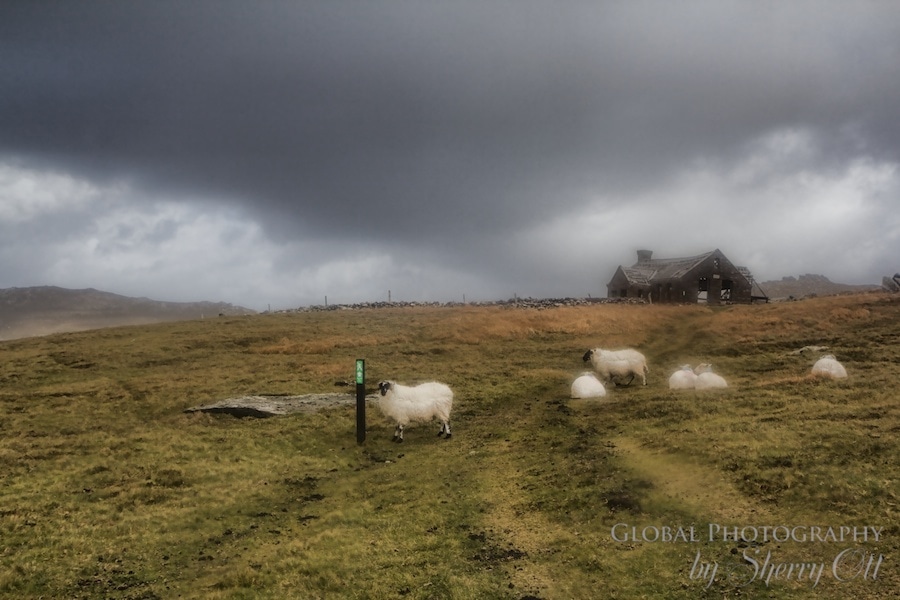 Want some nail biting fun? Then be sure to drive down Conor Pass into Dingle. The Conor Pass is the highest mountain pass in Ireland, and provides the most dramatic and scenic way of entering or leaving the town of Dingle. This narrow, twisting road runs between the towns of Dingle and Kilmore Cross on the north side of the peninsula.

The wind was howling through the gap as we came down the tiny one lane pass – a mossy old stone wall the only thing separating my car from toppling off the edge. 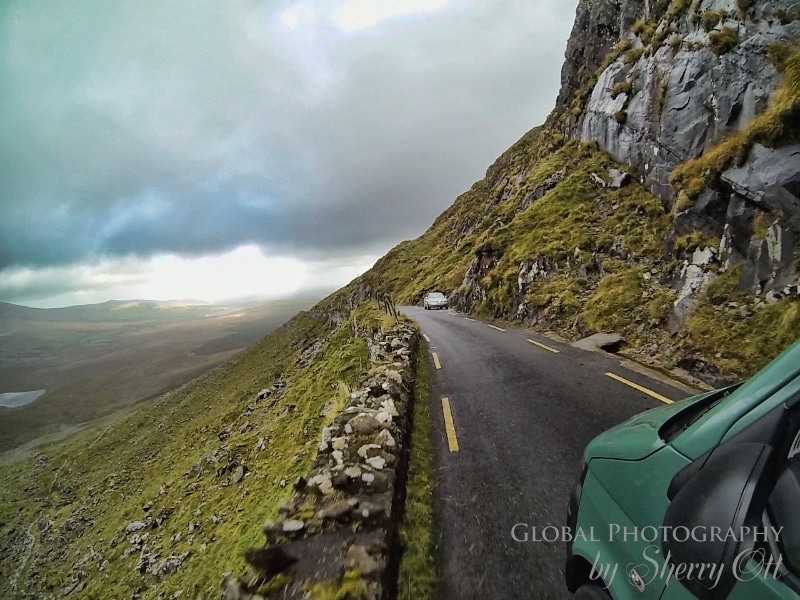 Where to Eat in Dingle

Need a lunch break? Head for Dingle town and stop at Garden CafÃ©. Fresh soups, strong coffee, and great sandwiches were served there. And you must stop in at the Little Cheese Shop I only have 3 words for this little shop in Dingle town â cheese and chocolate. Do I need to say any more? 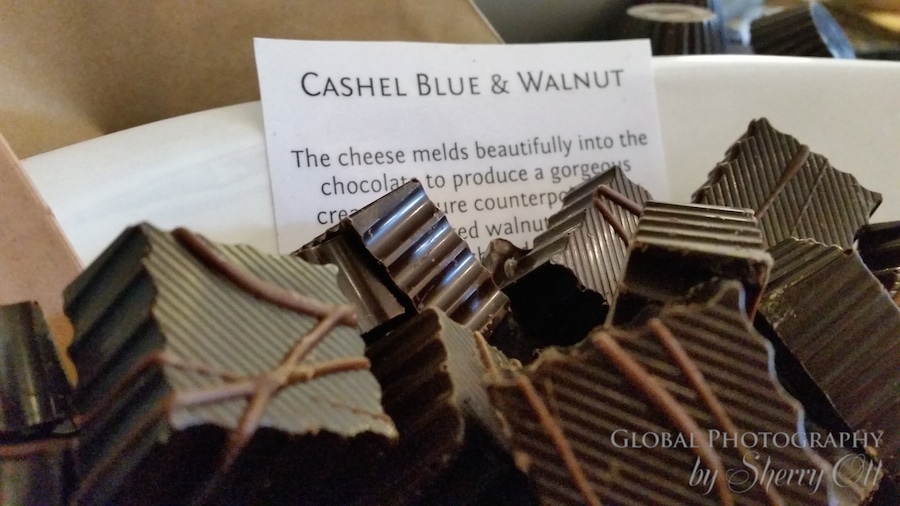 So if you are going to see Dingle (and you definitely should!), allow plenty of time to see and experience all of these gems around the Dingle Peninsula!

How Can You Get This Dingle Peninsula Experience:

Where to Stay near the Dingle Peninsula
I stayed in Tralee at a cute little Bed and Breakfast and we drove out to the Peninsula from there. Tralee was a nice home base and Mary, who ran the B &B made the best breakfast in Ireland!
Derreen Tighue Bed & Breakfast

See all the photos from my Day on the Dingle Peninsula

10 Responses to "Things to do in Dingle Ireland"