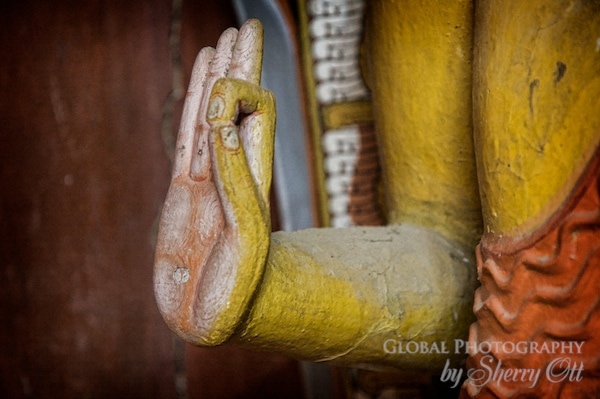 A story of 2 tourists, 1 tuk tuk driver, and 3 temples

Iâm going to huff and puff and blow your temple down!Â  This is the story of 2 little tourists, 1 tuk tuk driver, and 3 temples; one made of wood, one made of brick, and one made of stone.

Once upon a time there were two little tourists…ok – we aren’t that little…but it’s a fairy tale…geez!Â  The two little tourists, Sherry and Russ, were staying in an ancient town with a sweet little name, Kandy.Â  Kandy was known to be the spiritual center of Sri Lanka.Â Â  Russ saidÂ  that if youâre in the spiritual epicenter, then you should focus on spirituality.Â  So even though Sherry wasn’t a very spiritual person, she decided to give Kandy spirituality a try and go templing.

(Ok all of you grammar nuts, I know that ‘templing’ is not really a wordâ¦at least thatâs what this spell check says to me. But to me âtemplingâ is used as a verb and is the act of visiting templesâ¦multiple temples. To go âtemplingâ indicates you spend the day visiting temples; and thatâs exactly what they did with the help of a tuk tuk driver from Kandy.)

The two little tourists met a nice, quiet (this is very important when choosing a driver) tuk tuk driver named Roshan who they negotiated with for a day trip to see the 3 famous temples outside of Kandy. These temples were special for their unique architecture; one made of stone, one of brick, and one of wood. After a bit of haggling, Roshan agreed to their low-ball price and picked Sherry and Russ up promptly the next morning.

Having read the fable of the Three Little Pigs before, Sherry and Russ decided to visit the temples in the reverse order of the traditional fable in hopes that they wouldn’t run into the Big Bad Wolf.Â  Or maybe Roshan just drove to them in whatever order he wanted…who really knows… 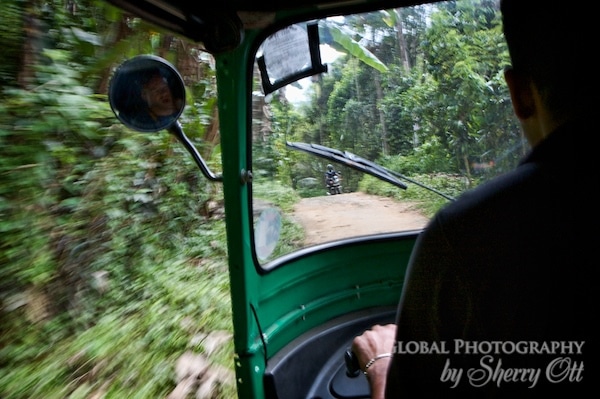 Off to see the Three LIttle Temples in Kandy Land

Temple Made of Stone

They first pulled up to the stone temple of Gadaradeniya Viharaya. Roshan parked the tuk tuk, looked the the two little tourists up and down, and assessed their temple worthiness – and they promptly failed.Â  Actually, it was Sherry that failed. Roshan told Sherry to take off her hat,Â  cover her legs, and told them both to leave their shoes at the tuk tuk. Luckily Sherry was not new to templing and the leg coverage thing was no surprise to her.Â  She dug deep down in her day pack and got her pashmina; wrapping it around her like a towel to cover her non-temple worthy skin. Roshan smiled and settled back in the tuk tuk for a little nap while Sherry and Russ explored.

Sherry and Russ walked across the hot pavement and towards the entrance of Gadaradeniya Viharaya and a man came up to them and started to talk about the temple explaining itâs history. Sherry immediately thought to hersef, “Great â we have an unwanted leach-guide who has attached himself to us and will demand money at the endâ¦oh joy.” She tried to be aloof, but the man kept talking and walking with the two little tourists through the various rooms of the temple. Sherry and Russ learned that the temple was unique for itâs construction; it was built on top of a large slab of undulating stone which formed little lily pools where lotus would bloom. The man continued to lead them into another area with a red, ancient-looking door adorned with intricate paintings and an old metal door knocker shaped like a fish.Â  The man opened up the creaky door to unveil a giant golden Buddha statute and Russ squealed in glee as if he was unveiling a long lost treasure.

The Buddha statue loomed above them with colorful flowers arranged at its feet. The self-proclaimed guide continued to pump their brains with history and fascinating facts. The guide said he was an artist ,so he painstakingly pointed out all of the restoration which was being done in the various corners of the temple. At the end of our âtourâ, he asked for nothing which surprised and befuddled Sherry and Russ. 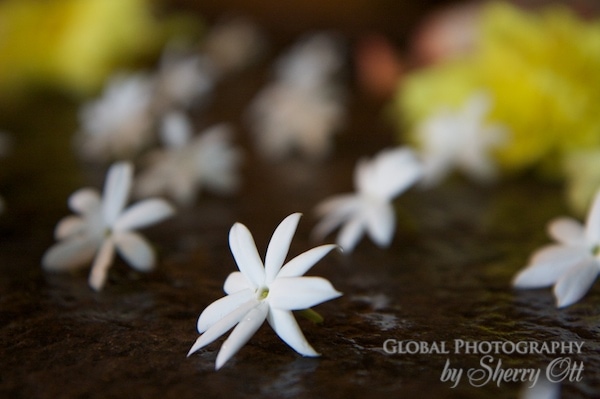 The temple is perched on a stone slab 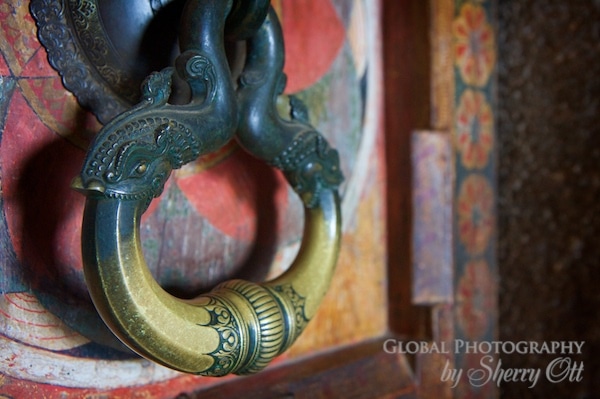 Temple Made of Brick

Sherry, Russ and Roshan next moved on to the brick temple, Lankatilake Viharaya. Once again Roshan parked and reminded the little tourists of the ârulesâ. They walked to the ticket booth and paid a very small fee; then the man who took their ticket continued to walk with Sherry and Russ and started telling them about the history and materials of the building. These etheral, impromptu tour guides the little tourists kept encountering were locals who lived in the nearby villages and âworkedâ at the temple taking tickets.Â  More often than not these tour guide fairies were taking naps. The guides simply enjoyed showing people around as part of the entry ticket to the sacred temples. They asked for nothing and filled the little tourists’ heads with information and knowledge; an unusual set of events in Asia.Â  But hey…this is a fairy tale…right?

Gods hid behind curtains and were unveiled for a quick viewing and photographs specifically for the little tourists.Â  The brickwork in this temple was stunning. Rounded domed corners made of red bricks seemed to defy gravity.

Unfortunately Roshan’s little tuk tuk could not defy gravity. When the 3 travelers were taking back roads to view their final temple they were stopped. No, it wasnât the Big Bad Wolf, it was a Big Bad Hill. With all of his might Roshan tried to make a run for it while Russ and Sherry leaned forward in the tuk tuk trying to keep the little vehicleâs weight grounded up the steep, rut-filled hill. But the tuk tuk and Roshanâs driving skills were no match for the hill. It huffed and puffed and eventually Russ and Sherry had to get out and help push it up the hill along with the crowd of locals which had gathered around them.Â  The little tourists, Roshan, and the locals all rejoiced when they made it up to the top safely.Â  The little touristsÂ  bid their new friends farewell, gave their thanks, and continued their templing adventure. 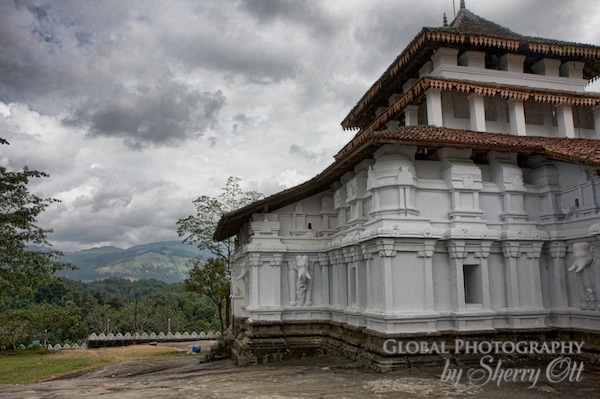 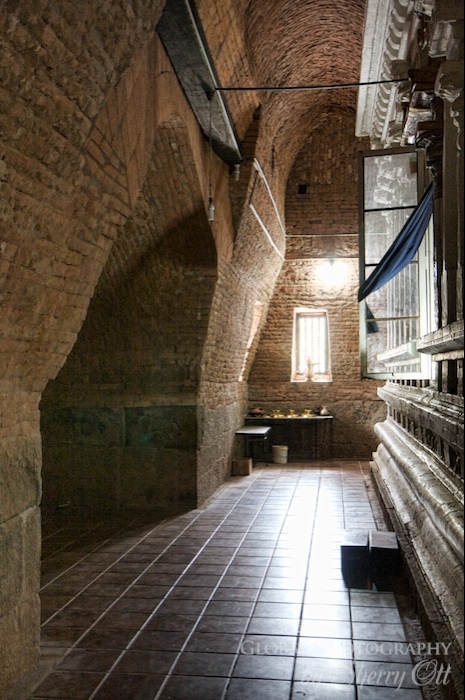 Brickwork that a wolf would be proud of

Temple made of Wood

The third little temple was made of wood and Sherry was pretty sure the Big Bad Wolf could have blown this temple down if it really wanted to. The Embekka Devale temple was probably the least sturdy of the three, but the carvings were impressive. The temple consisted of a long hall with pillars and intricate carved designs on each pillar, with no two alike. Once again the little tourists attracted a local âguideâ who accompanied them every step of the way.Â  The guide pointed to the ceiling and said in his broken English that no nails had been used for this temple, it was a complete wood architecture miracle!Â  The guide took Sherry and Russ to see the statues, allowing them time to photograph the sacred Gods and Goddesses. The little tourists thanked the guide once again and left completely satisfied AND without a single splinter. 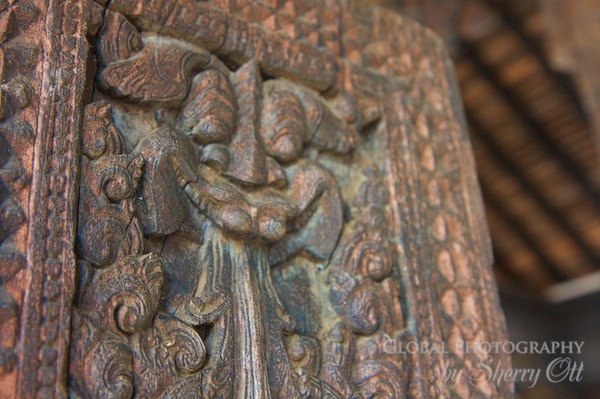 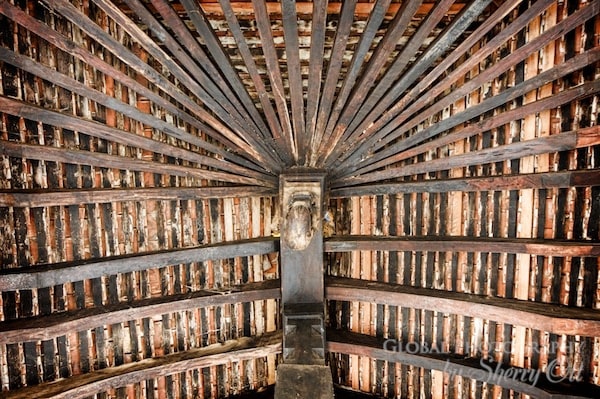 The nail-less roof of the wood temple

The best part of the visiting these three little temples the whole day was that there was no Big Bad Wolf to ruin the day. The little tourists were fully expecting to be constantly âsold toâ and propositioned to buy more of âinsert name of anything hereâ. But the Wolf never showed up. Instead, the little tourists paid their money to enter the temples, but then were showered with attention and informationâ¦and asked for nothing in exchange. And the best part of the story was that Roshan never tried to sell the little tourists anything further or convince them to do more with him and his little tuk tuk. Roshan simply picked them up when he was supposed to and dropped them off at the end. And for that, Roshan actually got his original asking price. After all, sometimes peace and quiet is worth money.

View all the pictures from the Fairy Tale Day:

10 Responses to "The Three Little Temples"