I want to continue to inspire others to travel with kids who arenât their own and be travel mentors, so I decided to start taking guest posts about other Niece/Nephew Projects! Youâll hear their stories, tips, ups and downs. Over the next week youâll be seeing Aunt Michaela and Niece Lauraâs story here on Ottsworld! And if it inspires you to do something similar, let me know about it â and maybe just maybe youâll even want to write about it!

One is a veteran traveler and the other went on her very first international trip. How do Michaela Potter and Laura Potterâs favorite experiences compare during their Niece Project trip to Croatia? Plus get ideas on how to make your trip to Croatia the best!

1. What was your favorite city on your Croatia trip?

Michaela:Â  Located right on the Adriatic, Old Town Zadar offered something unique over other destinations in Croatia (and elsewhere) â the beautiful sounds of the Sea Organ and the colorful light show from the Sun Salutation. It was our first stop on the coast after traveling from Zagreb, and the combination of the charming terracotta rooftops and the calmness of the sea was soothing. Plus, there were far less English speaking travelers than our next destinations further south. 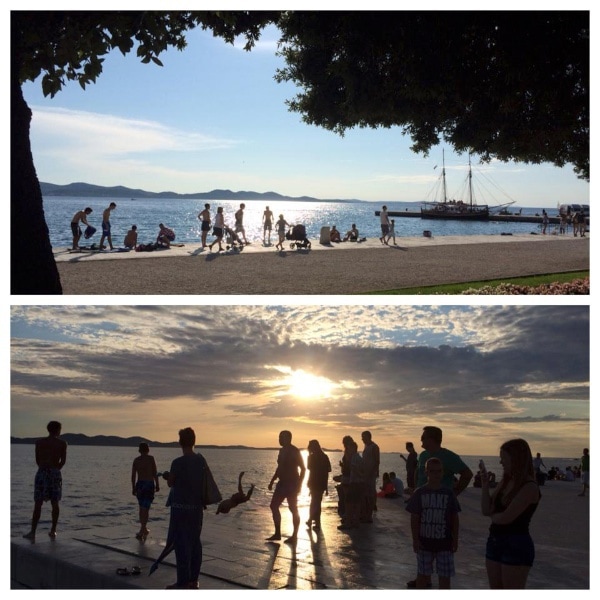 Laura:Â  My favorite city must be Zagreb, out of all the cities we visited. From the winding streets to the art vendors, I found that my stay in Zagreb allowed me to feel the most submerged in the new culture. I rarely heard anyone speak English there, compared to Zadar, Split, and Dubrovnik. The only obvious tourists in Zagreb were Germans, which to be surrounded by them was still a new experience!

2. What was your best activity in Croatia?

Michaela:Â  The âMuseum of Broken Relationshipsâ in Zagreb is such a unique experience. It was heartbreaking, devastating, touching and tender all at the same time. When chatting with others who have been there, they all say that it is one of their favorites as well. 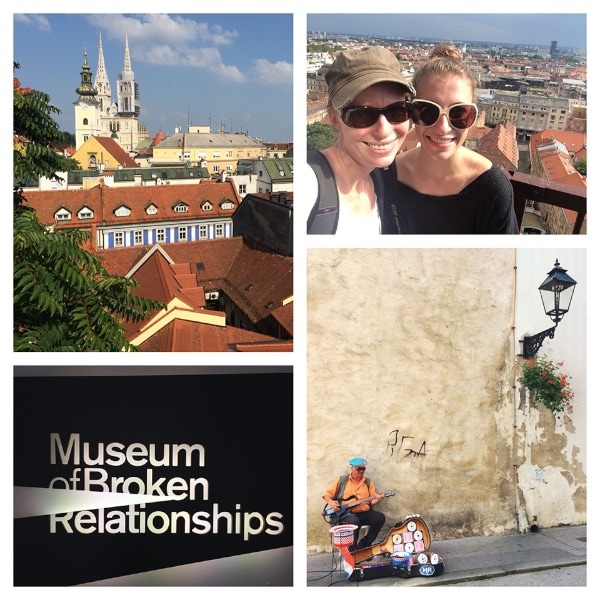 Laura:Â  My favorite activity of the trip was kayaking partway around the haunted island of Lokrum (off the coast of Dubrovnik) and into the nearby cave. The waves may have been a bit choppy that evening, but that didnât stop us all from going on that adventure!

3. What was your best day in Croatia?

Michaela:Â  That perfect day (which is few and far between) in which you are with great friends and great family â and it also happens to be the most beautiful place ever â that was our day sailing off of Split. Michael (my husband) had just joined us a couple of days before and one of his best friends since childhood, Max, happened to be in Budapest with his girlfriend and decided to âswing byâ and meet us in Split.

So we found a boat and a captain who was willing to take us out for the day at the last minute. Since it wasnât an organized tour, we could go at our leisure â and boy did we! It was so much fun to see Laura experience snorkeling for the first time, and everyone participate in âman overboardâ maneuvers. 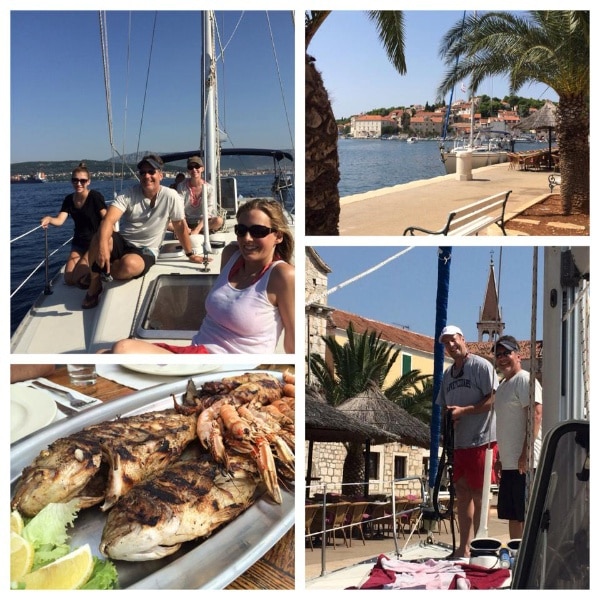 The highlight was definitely lunch â in which we stopped at a small island and visited every restaurant before the captain deemed one the best (he insisted on going into the kitchen to make sure their fish was in fact fresh). We sat there for a couple of hours devouring some of the best seafood we ever had.

I know, hands down, that everyone on that boat that day, including the captain, had an incredible time.

Laura:Â  The greatest experience I had on the entire trip was our day-long sailing trip to nearby islands. Michaela and Michael rented a sailboat and their friends visiting Hungary drove down to spend the day with us, too. We all had a great time playing man-overboard, diving for clams, recording with the gopro, and eating the most delicious, fresh seafood. There were so many laughs that day; I will never forget that adventure. 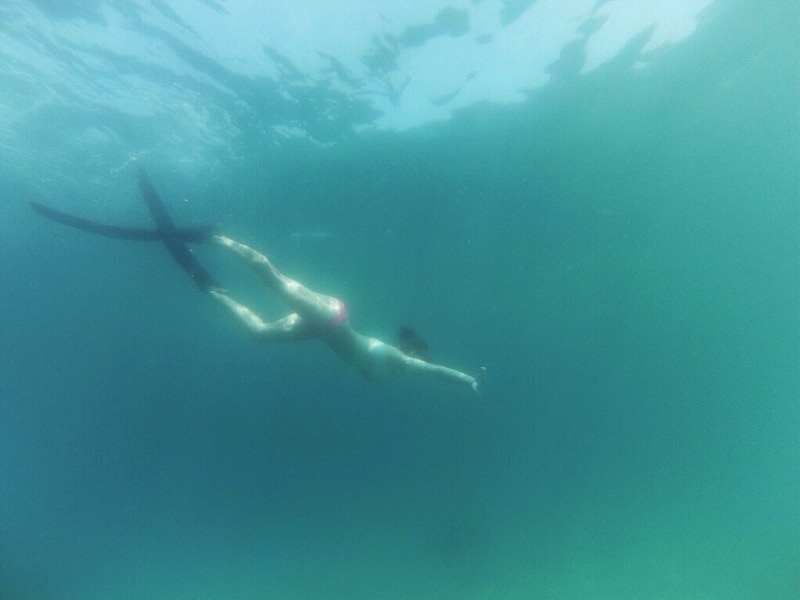 Snorkeling with my gopro

4. What the the best meal you had in Croatia?

But in addition to the incredible seafood, I have to say, the pizza everywhere (especially in Zadar) was delicious. I live in NYC, and though you would assume otherwise, it is actually difficult to find a decent slice. Just because there are so many pizza places, doesnât mean they are all good! But we did not experience a bad slice, and ate them often as we snacked throughout the days.

Laura:Â  Itâs so hard for me to decide which grilled, whole fish I enjoyed the most, but dang were they amazing! I wish it were common to have a fish that isnât filleted in America because thereâs something so delicious and rewarding about eating straight from the fish! 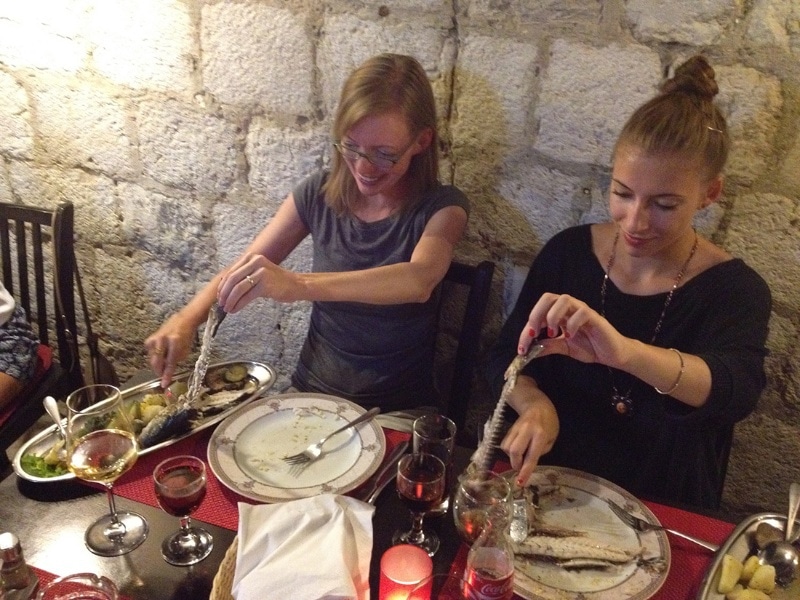 Learning how to eat whole fish together

Of course thereâs the pizza, too. Everyone knows that Italian pizza is the greatest, so considering the location of Croatia, right across the sea from Italy, one can assume that the pizza is phenomenal there, too. And oh, it was!

5. What was your best photo you took in Croatia?

Michaela:Â  I have a hard time choosing between two. The first is one I took of Laura in Zadar. We had just arrived and started to explore the beautiful waterfront just outside of our apartment. I was standing a bit back and watched her as she was taking photos.

She may not remember, but when she was really little, I bought her a pink Barbie camera to inspire her to get into photography (as I was). So seeing how much she has embraced it over the past few years (check out Laura’s Instagram page), it makes me think I had something to do with that. And thatâs why I love this photo.

The second one I captured in Split after we had dinner in our neighborhood. I stepped away for a few moments to come back and see âUncleâ Michael and Laura sitting on the side steps of the building. They hadnât noticed me but I listened as he espoused avuncular advice to Laura as she was preparing to start college when we returned. It was a moment that just warmed my heart.

Laura:Â  Itâs hard to choose my favorite photo from Croatia since I took so many, but I must say that the one I captured atop the cliff side of the most uninhabitable island of Kornati is one that grabs so much beauty. One can see the Adriatic sea on the right, with greenish Mir Lake on the left. I just remember standing up there and feeling on top of the world, as if itâs the greatest sight Iâd ever see. 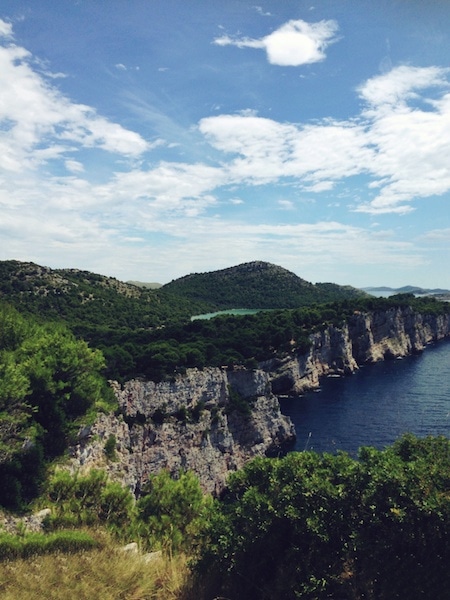 Michaela Potter lives in New York City with her husband, Michael Bontempi and two kitties. Along with Michael and Sherry Ott, she is co-founder of Meet, Plan, Go! â inspiring adults that itâs never too late to explore the world during career breaks. She also offers video production and design services through her company, Wanderlust Productions, and is currently producing a documentary â New York After Dark

Laura Potter is currently a sophomore business major at Montclair State University and is actively looking into study abroad programs. While not working as a barista at Starbucks (which she loves), she can be found exploring NYC with her camera. She runs the Instagram account for Big Apple Greeter (@bigapplegreeter) and showcases her own work @misslaurapotter.

Would you like to share your Niece or Nephew Project story on Ottsworld to inspire others?Â  Email me at [email protected] and pitch me your story!

2 Responses to "The Best of Croatia"