Take a Ride on the Longest Museum in the World 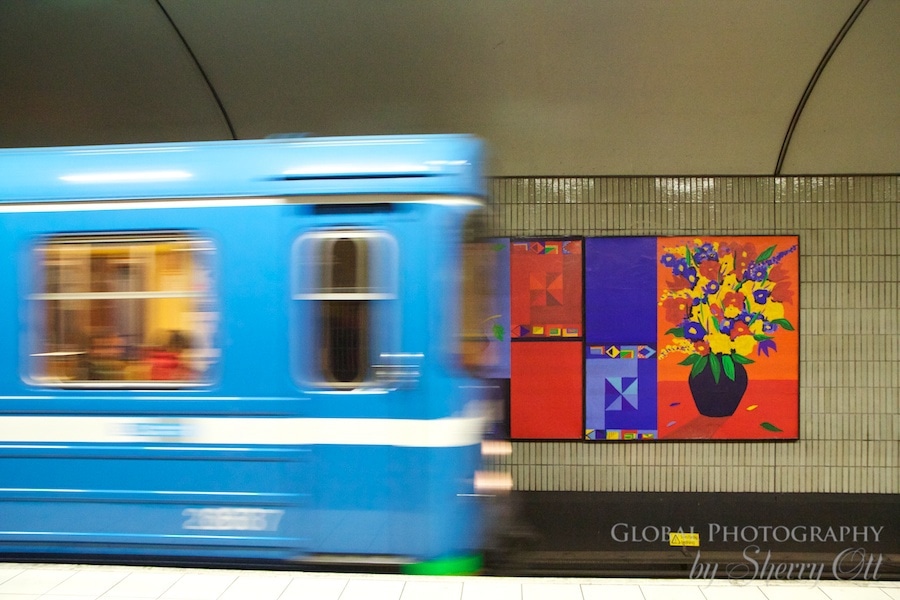 A Stockholm subway train passes by artwork in the station.

When I scoured the internet and my AFAR phone app for ideas on free or cheap things I could do in Stockholm, I came across this:

This is probably the last place you’d expect to find Stockholm art. Â Now my interest was peaked. First, I love transportation. Second, I like art. Third, I love quirky superlative travel attractions. Fourth, I already had a subway ticket.

Of course I was going to go check this out!

Over 90 of the 100 subway stations in Stockholm have been decorated with sculptures, mosaics, paintings, installations, engravings and reliefs by over 150 artists. 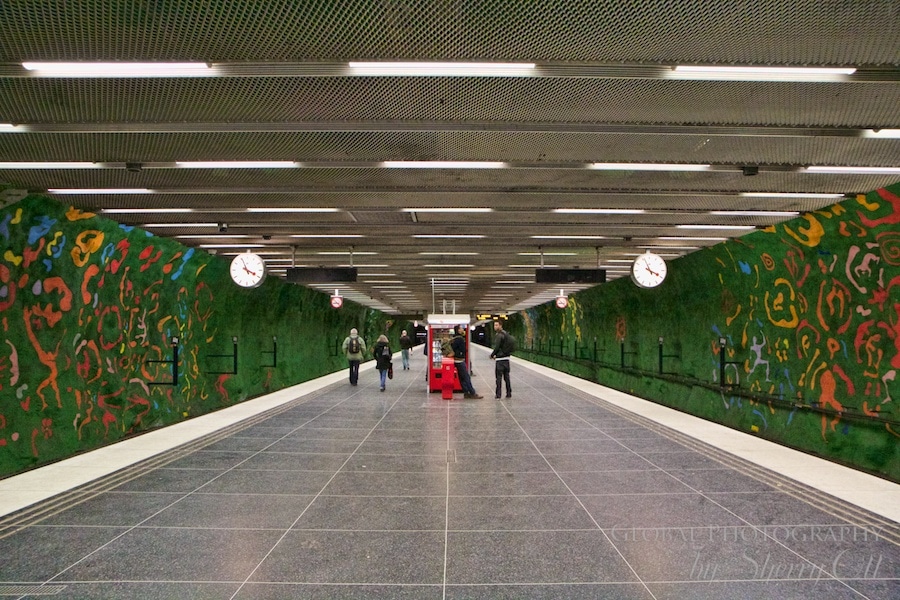 Commuters waiting on the platform in a colorful and flower filled station. 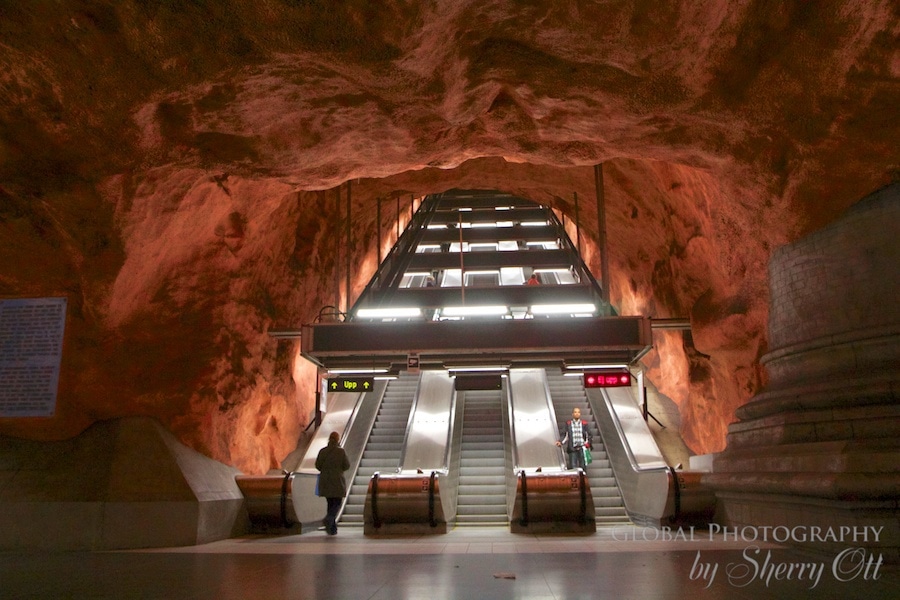 Exposed rock painted red sort of makes it look like an escalator ride out of/into hell. 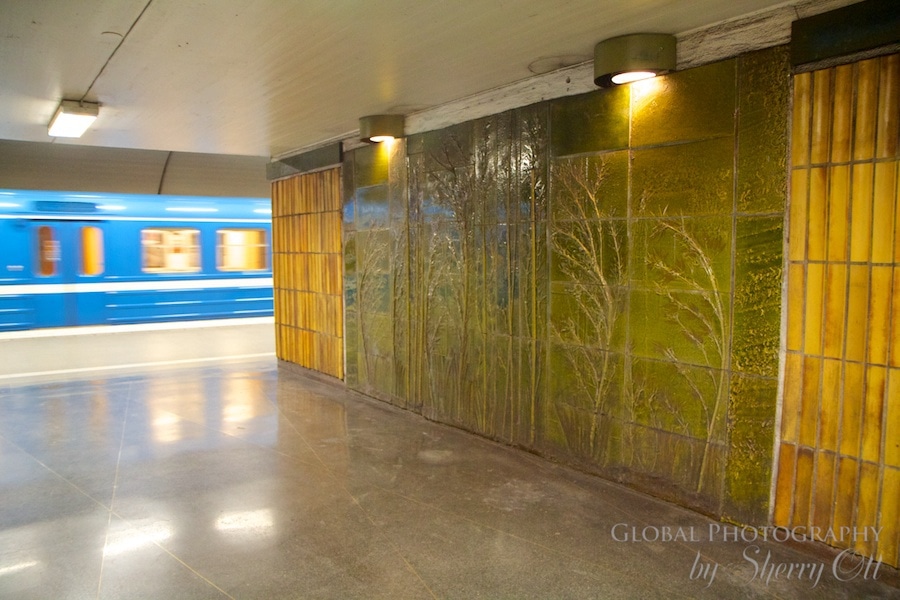 I tried to map out a route, but it was slightly difficult since no map really existed (or I couldn’t find it) with Â the artwork and each stop. However I did find this useful pdf document about the art in the Stockholm subway put out by Stockholm Tunnelbana (subway). The pdf is useful to print off you go and learn about the history of when the lines were created, how they were created, and what the style of art is on certain lines. In addition it lists a all of the artists and the installations.

I basically took off on the green line and would get off at each stop take photos and then get back on the next train that came by. In some stations I had to search longer for the art, but there was always something there. I didnât stop at every single station as that would have taken about 8 hrs! But I did get a good feel for the different lines and the type of art found along each line. 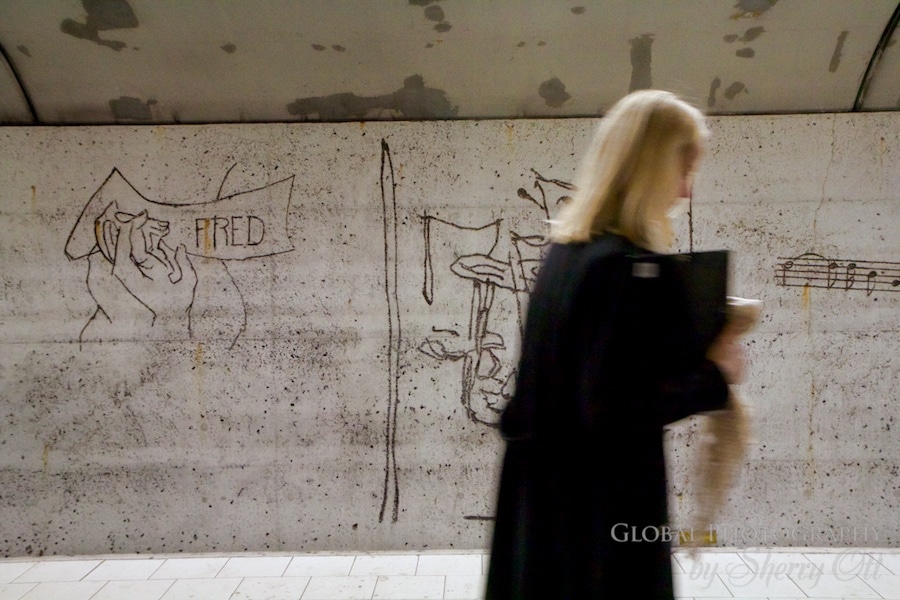 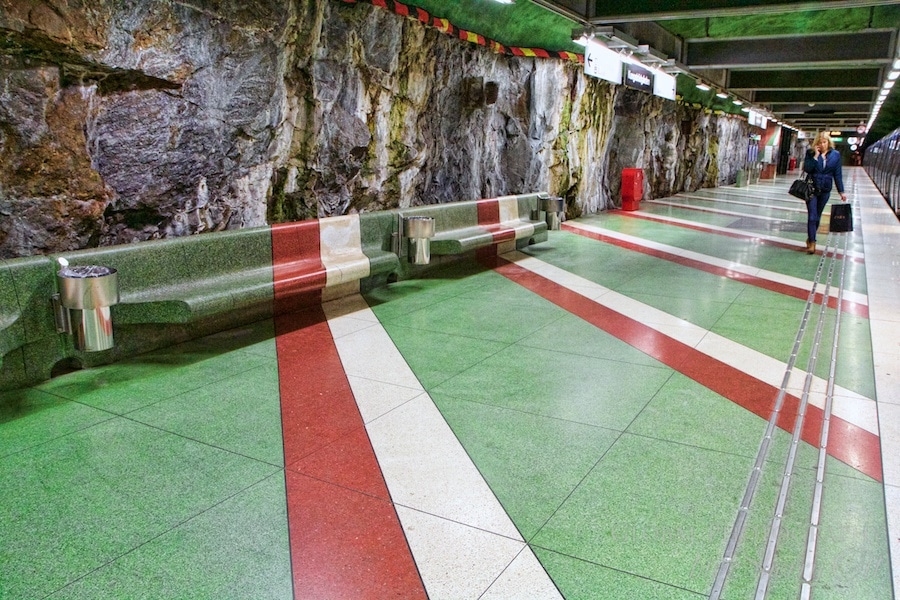 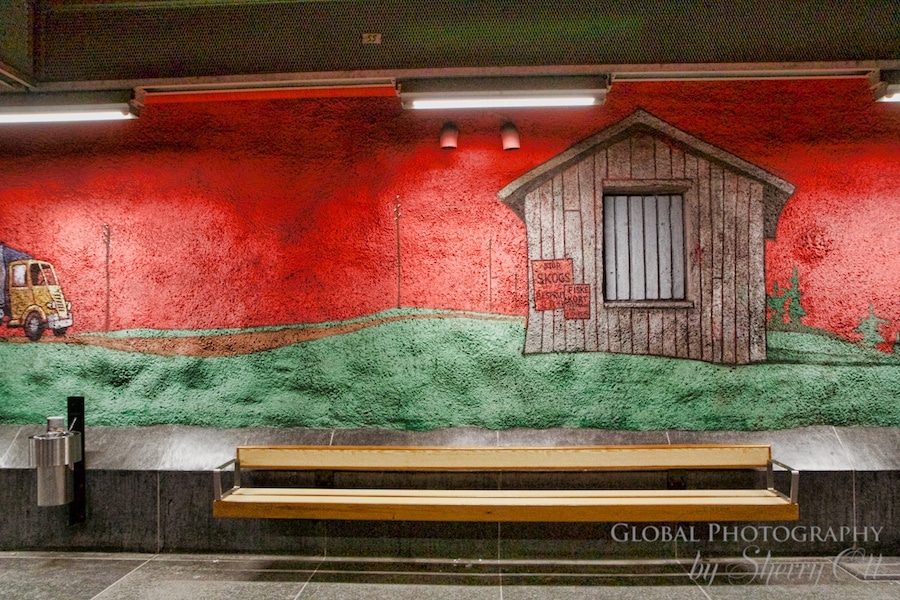 Taking a subway to the ‘woods’.

My favorite line by far was the blue line which was built in the 1970âs and was left more ânaturalâ. All of the blastings that take place in order to build an underground subway are typically covered up with tiles and walls so that it appears more modern. But the blue line left the rock exposed which gives you the feeling of a cave as opposed to a subway. 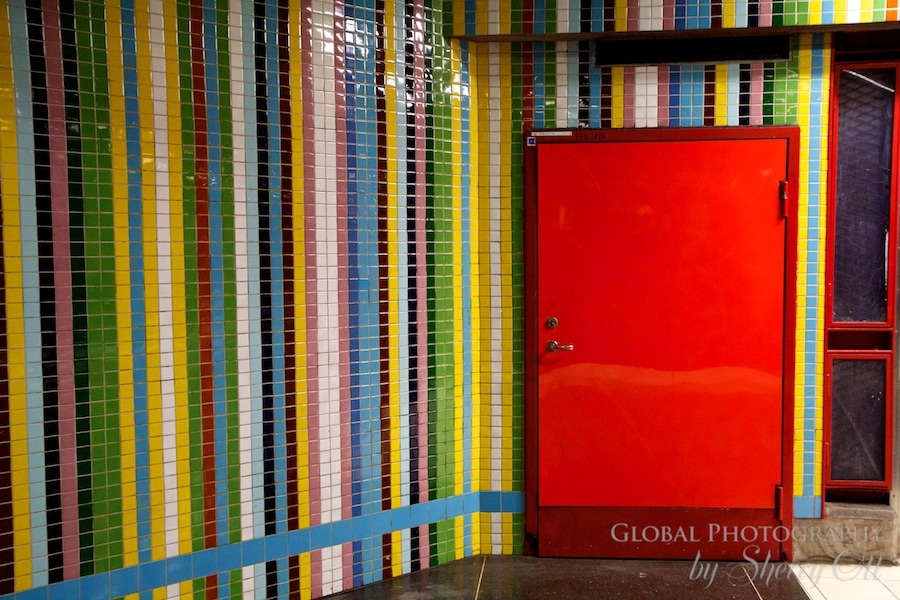 Colorful tiled walls – one of my favorite! 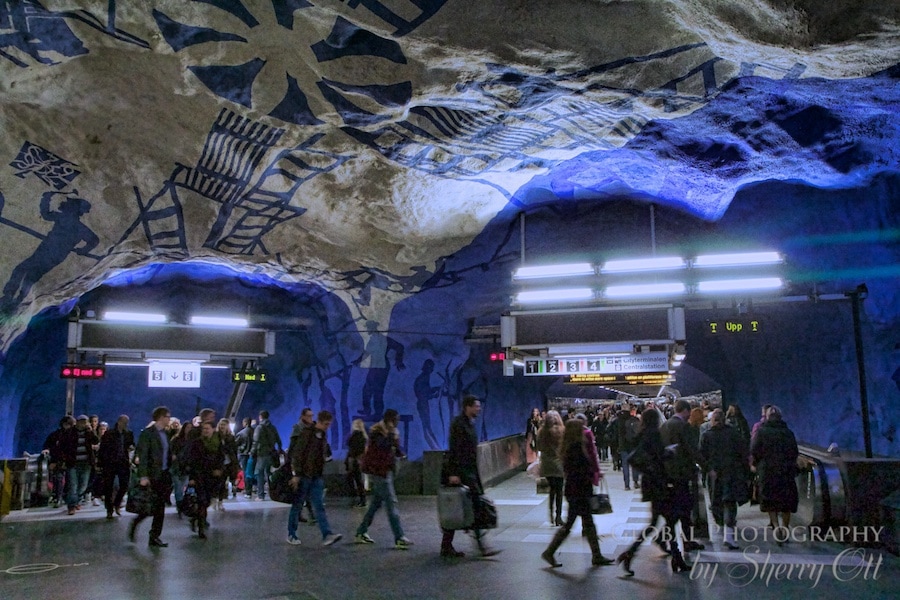 I was in the subway long enough that I hit rush hour. 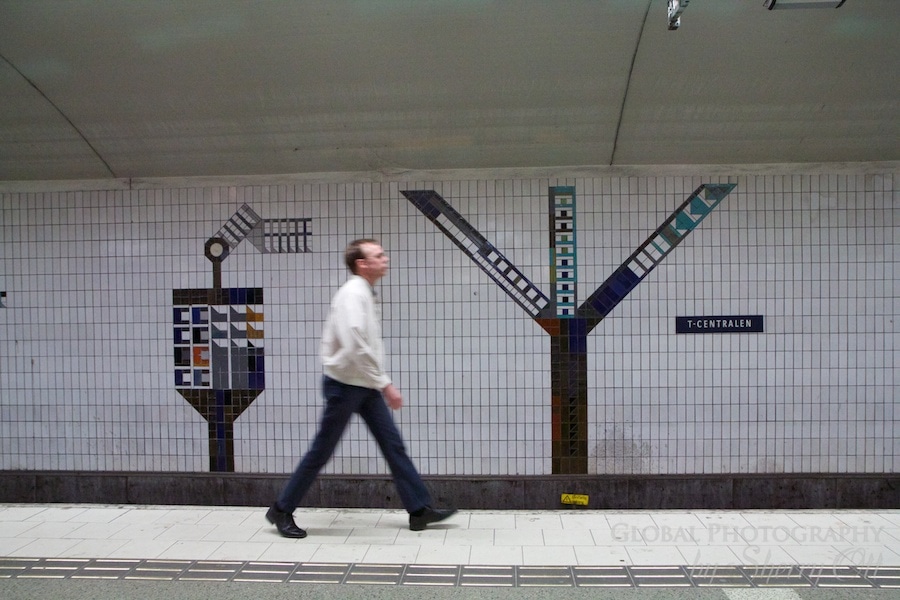 This commuter seemed to blend into the art!

Outdoor art – take a seat and wait for the train!

The subway ride on this artistic adventure was part of the fun. I enjoyed riding out to the far reaches of the lines as you were able to see a lot of the surrounding country side. And to my surprise, art even was present in the above ground sections of the subway lines. I had a lot of time to observe people on the subway, some business commuters, some students, and some tourists. It was a fabulous way to people watch and observe the local transportation culture too. I wondered if any of these locals ever really even noticed the subway art any longer.

This was the best 3 hours Iâve ever spent in any subway, let alone the longest art museum in the world.