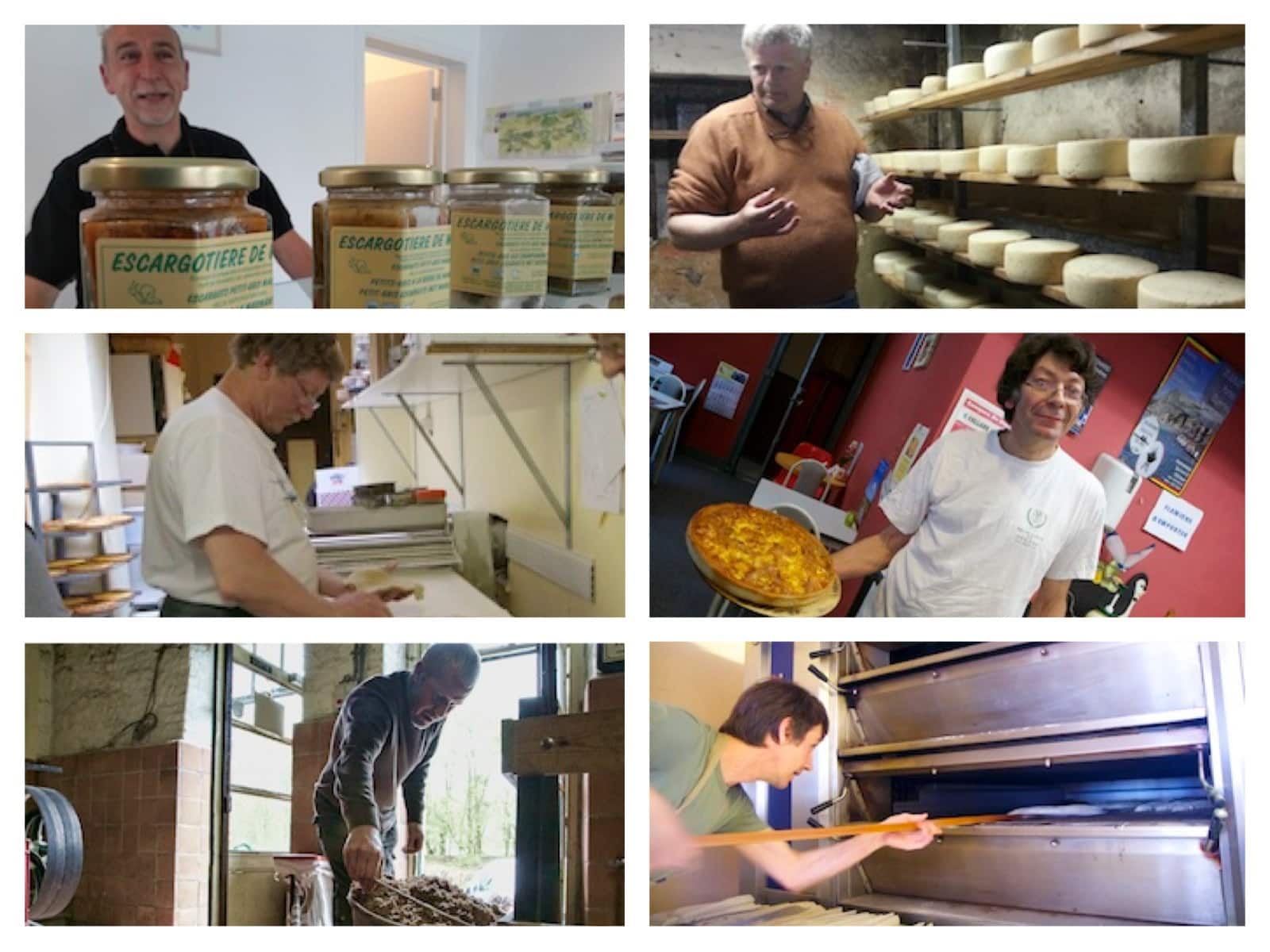 A Cast of Cooking Characters in Wallonia

I read the itinerary as if it were a theater program â the show was all about how 3 women and two tour guides were on a quest to learn about and taste artisanal recipes and local delicacies of Wallonia. They would wind around the little river towns and valleys stopping at farms along the way to get a complete taste of the Belgium food scene. And for the intermission we would eat lunch! I read the itinerary as I ate my breakfast in the old restored aristocrat town houses of Liege turned Crown Plaza that morning and thought to myself â I really should be just nibbling on fruit considering this whole day my role was to eat Belgium food.

First of all, Wallonia is not some fairy tale place where tinkerbell or dragons roam; it is an area of Belgium, primarily south Belgium, that is French speaking. The setting for the dayâs âFood Folliesâ would be the towns, villages, and farms around the Meuse River, dubbed the oldest river in the world. It provided the perfect backdrop for these Food Follies and the cast of cooking characters we met throughout the day.

Flour, eggs, sugar, milk â the standard ingredients to making bread. So how can a baker stand out? You take years and generations to hone your craft, and you love baking bread more than anything in life, except for maybe your beautiful wife who brings this little rustic bakery to life.

When we walked into LeGrand bakery in Namur Belgium we received a warm welcome from Angela, the wife of the baker Dominique. This is a baking legacy which started in 1831 and has carried on through 6 generations. The bakery was cream colored and simple â it exuded warmth that wasnât simply coming from the big baking oven in the back. There were racks and baskets of bread taking on various shapes and flavors. A scale covered in a fine dust of flour sat on the counter and a glass chandelier hung from the ceiling providing a shabby chic feel.

Angela and a cousin Nicola led us towards the back of the bakery where we met Dominique the The Baker. He smiled at us, shook our hands, and quietly went back to work forming perfect loaves of dough to go into the industrial oven. His hands worked like a sculpture gently forming the exact shapes through years of practice and instinct. There was one picture hanging on the wall â taken in 1940, it was of previous generations of bakers who stood around the first machine the bakery every purchased.

We tasted the delicious organic, artisanal bread warm from the oven. It tasted of crunchy, flavorful goodness with each bite. The recipe which was handed down from Dominiqueâs great, great great grandfather used special flour which is stone milled from an actual windmill in the area. We bought a few loaves to be enjoyed later on in the day and had to move on to the ânext actâ. Angela gave us a hug and a wide smile, and we left this special bakery yelling “Bravo!”. 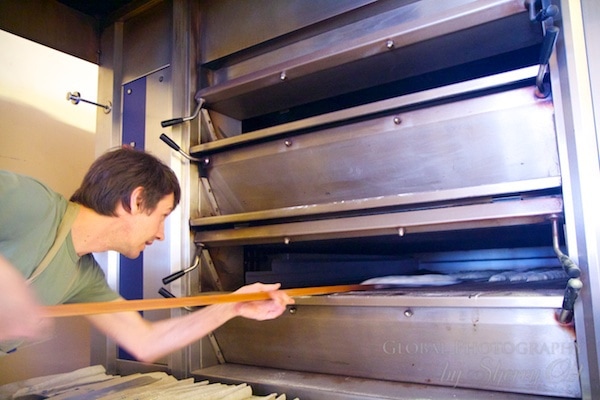 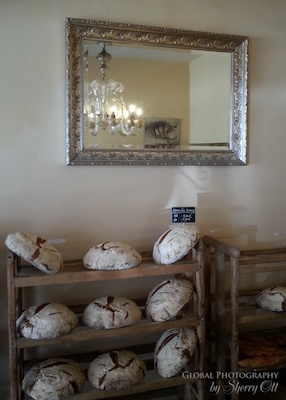 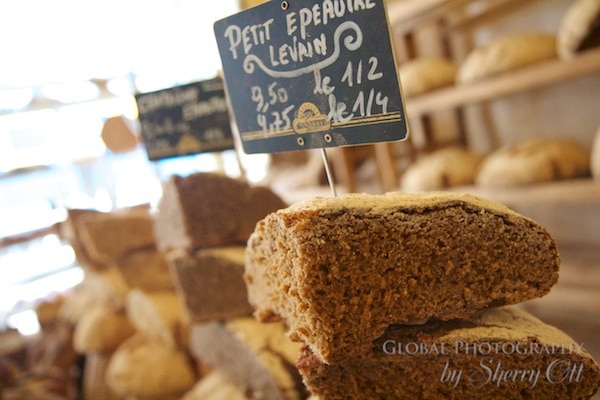 The man dressed in white and covered with flour firmly pushed the dough in the wooden mold. He picked up a brush and then brushed of the excess of flour as if he were a barber cleaning up after a haircut right before he whisked the black cape off the customer. Swiftly with a loud thwak he turned the mold over and out popped a perfectly formed Couques de Dinant. A specialty of the little river town named Dinant this cookie had played an important role in history and has managed to live on in present day.

This rock hard cookie is only made of two ingredients â flour and honey â and was used to replace bread when there was a shortage in medieval times. We were told to suck on the cookie as they are too hard to bite. They are also subsequently used to satiate teething babies or simply enjoy their complex design molds as a decoration. At Couques de Dinant V. Collard theyâve been making this recipe since 1744. These hard cookies are here to stay as part of the Dinant food culture. They come in various molds and they come with a warning â donât bite! 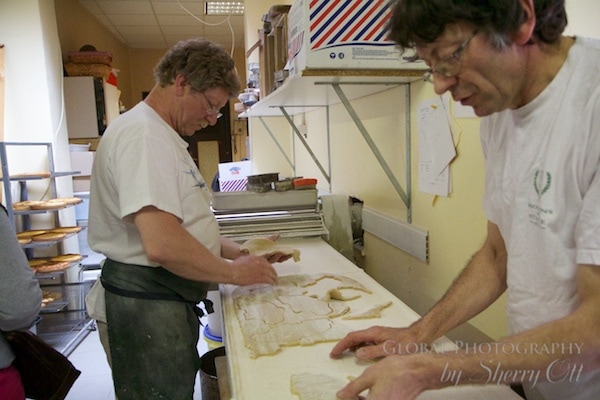 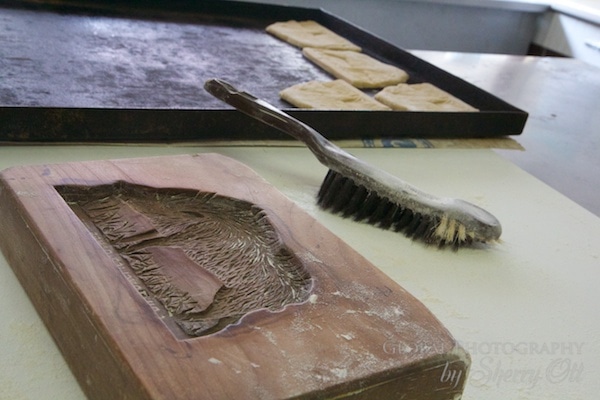 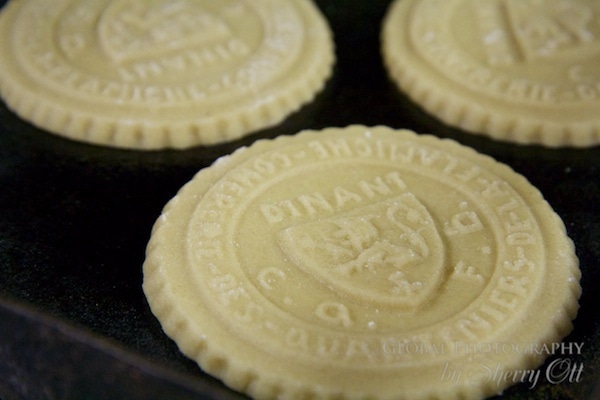 I watched in disbelief as the Flamiche Maker mixed together the ingredients. One pound of butter, 13 eggs, 1 pound of Boulette cheese, and a healthy dose of pepper â simple and packed with calories â I knew this recipe could be nothing but richly delicious. Similar to a quiche, flamiche is a tart that has been made for years in Dinant.

Legend has it that the flamiche was first created when a farmerâs wife on her way to Dinant, to sell the products of her farm on the market, fell and the products in her basket (butter, eggs, and cheese) became mixed together. She ran to a friend who was baking her bread. Making a base from some dough she added the mixture from her basket and put it in the oven. The flamiche was born. The flamiche is meant to be eaten right away â you wonât find them sitting around bakeries for long in Dinant. 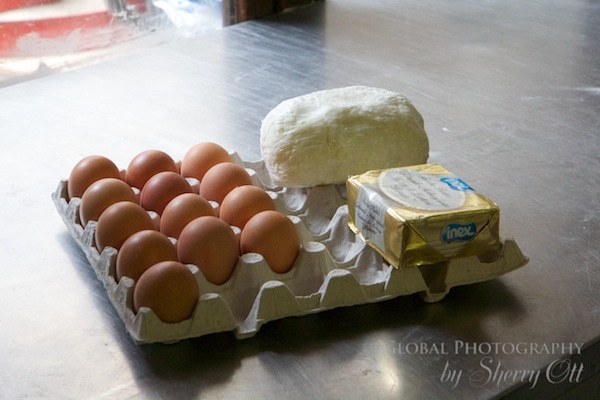 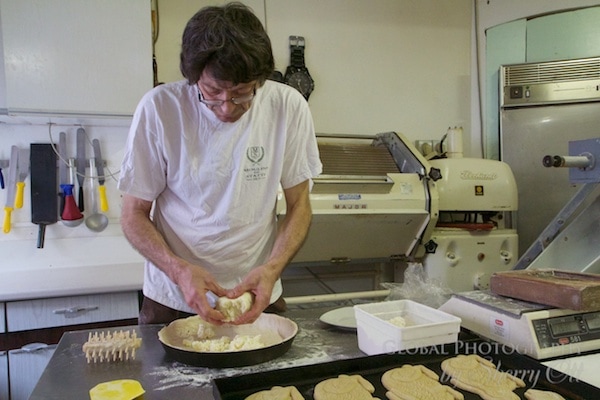 Filling the tart with cheese 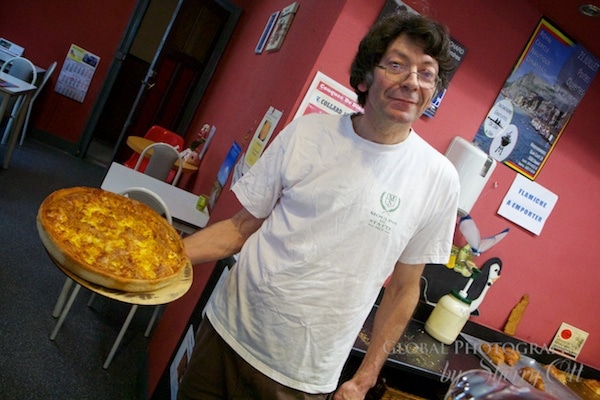 A Flamiche warm from the oven

Sabine Hazard was a big, robust man who looked like he fit the role of Cheese Creator perfectly. His hair was wildly uncombed, he had unruly eyebrows, and his orange sweater hugged his round belly. He had the look of a mad cheese scientist. He welcomed us to his chateau/farm, Ferme dâen Bas, which had been in his family for generations. It was a working farm which he had also expanded into holiday apartment rentals. The dog followed us out to his room where he created his Boulette cheese works of circular art and he walked us through the entire process including the brine dip that had been the same liquid mixture for generations. He explained that what makes the difference in cheese is the temperature and time of certain steps. He opened up the old musty cellar and there sat rows of cheese rounds which you can only get at the Cheese Creators farm. 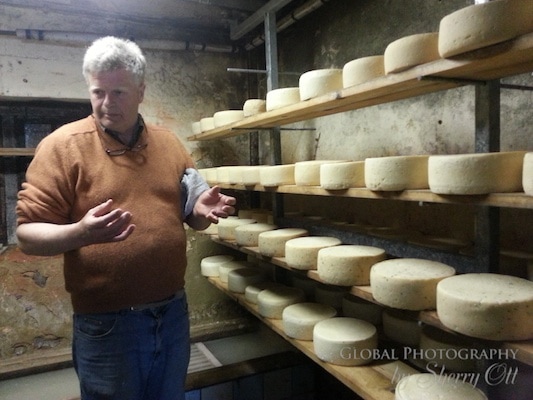 Cheese Maker showing us his inventory and storage

It was time for our intermission â and a drink. All of the food we had been gathering to this point plus a few other delicacies of the region were placed out on the table in front of us. We sat in the rustic brewery which smelled of hops and grain and enjoyed tasting each artisanal brew with the various meats, cheeses, flamiche, and bread. The Beer Brewer showed up after our lunch as he was finishing up yet another batch of snail beer. The Brasserie La Caracole is located in a small village in Falmignoul â and it was a small, local operation.

Their portfolio consists of four unfiltered and unpasteurized stock ales: Caracole, Nostradamus, Saxo , and Troublette â all with the signature snail image on them. The snail is the emblem of Namur and the word for a snail in local Namurois dialect is “Caracole”. 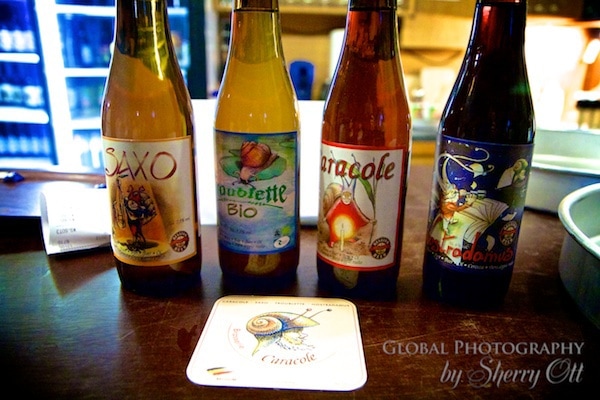 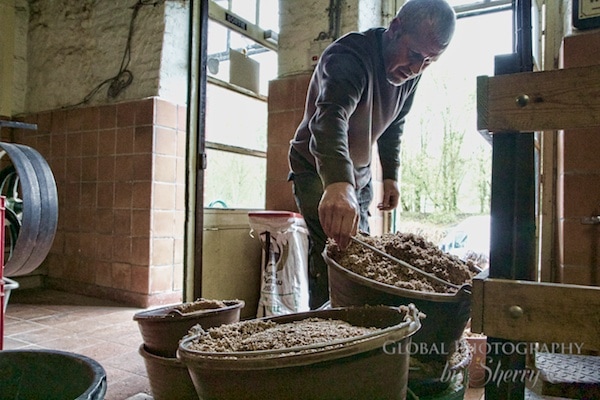 Eric picked up the snail and let it slowly slink around his hand. Itâs shell was about the diameter of a quarter and Eric the Snail Farmer explained that it took about 6 months for it to grow to this adult size. We were at the Lâescargotiere de Warnant, one of only three snail farms in Belgium. Here the Snail Farmer breeds/produces 600,000 snails per year. You might wonder what a snail farm looks like â no it doesnât have a barn. Instead it is simply a few green house structures, and lots of sheets of corrugated metal which the snails like to move around on in the summer. Their only real predators are rats, and thatâs why Eric has a dog to take care of the rats â plus, every good farmer needs a dog. Eric is a trivia book of snail facts, everything we throw out at him he answers with confidence. Not only do we see baby snails, but we also learn about their reproduction, hibernation, and the 12 ways to prepare them. A truly unique tour of a farm that I never thought I would see. We finished our tour by tasting a few different preparations of escargot 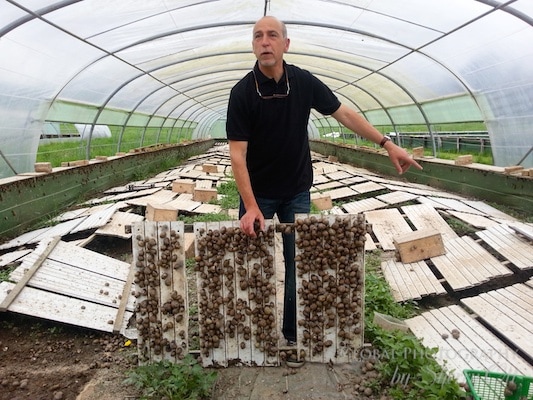 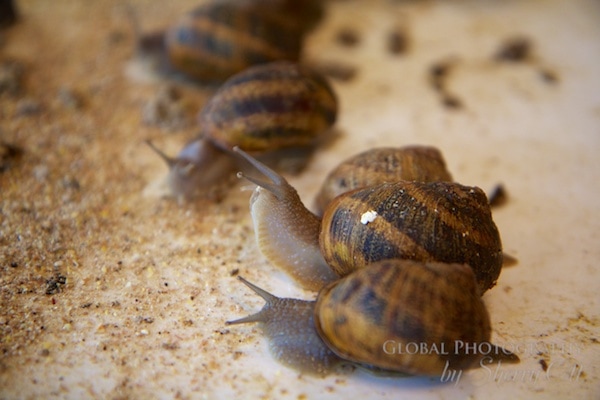 Escargot – one of many 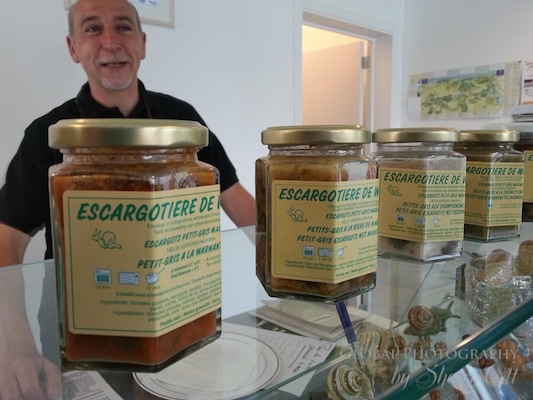 Eric providing us some samples

Our Food Follies in Wallonia had come to an end. Our tummies were full, and our taste buds satiated. We gave the cast of cooking characters a standing ovation!

If youâd like to do a similar tour through Wallonia, then you can contact the âDirectorâ of this dayâs activities â Evelyne De Meulemeester who leads private tours through the area.

5 Responses to "Cast of Cooking Characters"