The table is filled with drinks; pints of beer, German diesel (beer and coke), and glasses of wine. Thereâs music in the background, it sounds familiar to me as it echoes throughout the empty bar. My brain suddenly places it â Edelweiss from Sound of Music â a grin creeps across my face as I consider how appropriate the song is for where I am. The grin quickly disappears as I look across the table at my opponents and am reminded of why I’m here at this German bar on a Sunday afternoon. Mr. Sosic is holding his hand close to him. He has a serious look on his face as if heâs concentrating on solving the world water crisis. He intimidates me. Young Clement has a big smile on his face watching my every move. He looks innocent, but I wonder if I should trust him. And then thereâs silver-haired Edith with her glass of wine and flighty demeanor; she may be 90 years old, you want to trust herâ¦but I just donât know. I look at my hand and wonder what is the right play?

Iâm playing the ultimate German card game, Skat, in the town where it all started â Altenburg in the state of Thuringia. Luckily the game is for fun, and they expect me to make stupid plays since this is the first time I have learned this complex game where Jacks (which represent the common people) are the most powerful card. 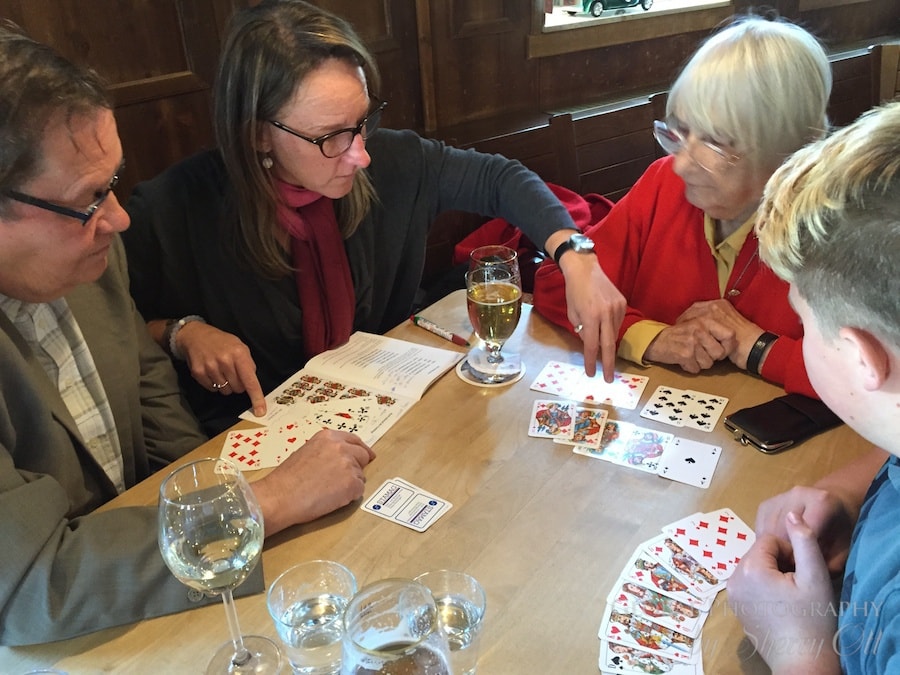 Game on! Learning to play Skat with 3 generations in the home of Skat – Altenburg Germany

One of the things Iâve had in my backpack for 9 years is a deck of cards (travel tip #44) because I come from a German card playing family. I have vivid memories of Sundays at my grandparentâs house with four card tables set up in their living room and all of my relatives playing Pitch, Gin Rummy, Pinochle, or Bridge in a smoke filled haze. The card playing gene was passed on to the next generations; my family had a tradition of playing cards whenever we were together and on New Year’s Eve. We always played the German card game my father learned when he was in the service, Sheepshead (Schafkopf). Every New Yearâs Eve weâd invite over the two other families we knew that had German roots and knew how to play the obscure game.

Skat is a much more complex version of Sheepshead, and it is THE most beloved and played card game in Germany. I was learning how to play this Skat card game with 3 generations of Germans in the town in which it was created â which made this one of my most memorable travel days on this Germany road trip.

Mr Sosic is the president of Altenburg Skat Association, the highest decision body for disputes associated with Skat centered in Altenberg.Â  President Sosic was teaching me all about this complicated game. And yes, there really are Skat disputes.Â  Skat judges meet yearly atÂ Hotel am RoÃplan (where I was learning to play) and settle actual disputes over games. So this means when you get in a fight with your family members about a rule in a game, you actually have a process to âtake them to courtâ. I told you Skat is a very serious game in Germany. Mr. Sosic told me that he often gets calls in the middle of the night asking about rules. 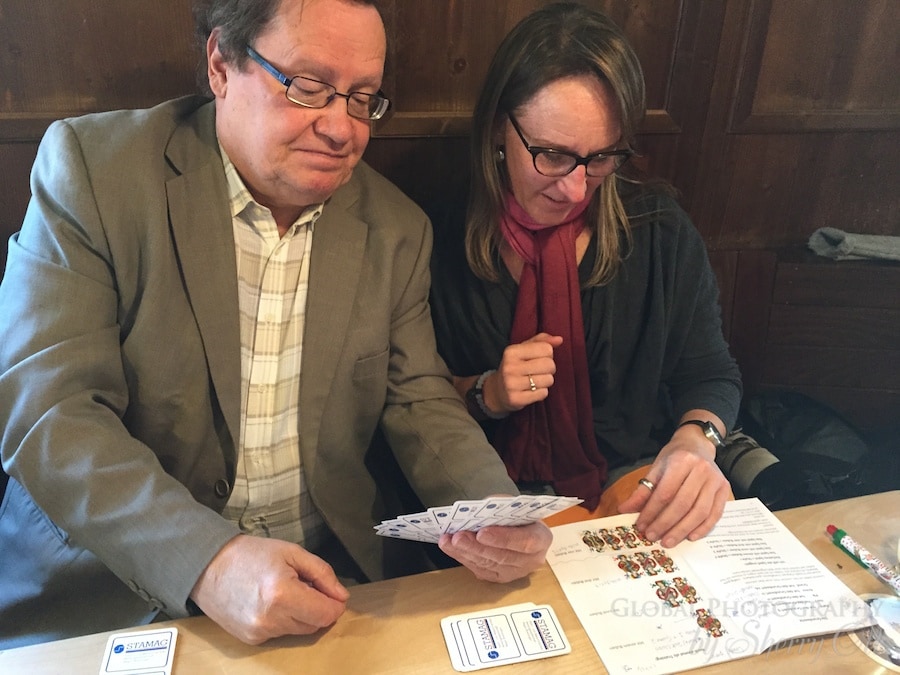 Mr Sosic is showing me the ropes.

This is not a simple card game to learn and thanks to my Altenburg teachers and interpreters for trying to teach a beginner. Luckily my previous Sheepshead experience helped a lot. Skat was developed from games like Sheepshead, Lâhombre, Solo, and Tarot between 1810 and 1817. I was definitely challenged with the bidding process, which was a complex process of give, listen, and tell. But even more foreign to me is that we played with a traditional German deck and instead of hearts, diamonds, clubs, and spades I had acorns, leaves, hearts, and bells. Plus, the Jack is not called a Jack, itâs called the Unter!

We played four hands, and after three we had each won one hand – even me! The forth hand was going to decide it; I bid and was deemed to be the âLonely Personâ – playing alone to take the tricks and appropriate points while the others formed a team against me. I needed 61 points to win – and I got 60. We actually split the deck; thereâs a total of 120 points to be had, and we each had 60, but because I bid for it and didnât make it – I essentially lost the tie.

Skat is a handful to learn

Getting used to the German deck of cards.

Drowning my sorrows in strudel.

I drown my card loss sorrows in a giant lunch of meat, German potato salad, and apple strudel. After lunch I was able to explore the city and soak up all of the card playing history.

Located inside the Altenburg Castle Walls youâll find a beautiful collection of the earliest decks of cards. I love cards, and immediately I was enthralled with the various shapes, sizes, and designs of the old decks. Some were made in Europe, but many were brought from the Far East. Not only were numerous old decks on display, but you were also able to learn about how the hand-made process designing and printing cards back in the 1900âs grew into industrial production of cards. The museum of playing cards is combined with other exhibitions from the castle museum.

I loved these round cards

Card decks from the Far East were color!

If you are a Skat player then you probably know about the Skat fountain found in Altenburg town center. The tradition of âbaptizingâ your Skat deck in the âluckyâ waters that flow from the fountain is a popular stop. The fountain is actually a sculpture of four jacks depicted fighting for the best hand. If you look closely, you can see that the jack of clubs, the most powerful card in Skat, has won!

Baptizing my deck, and also taking a good luck swig of local liquor.

Stop in the town center and check out the Speilkartenladen where you can purchase decks of cards (Skat decks and regular decks) and card accessories. The experts there will ensure that you get your Altenburg card fix satiated. Not only do they have modern day decks, but also vintage Skat decks for purchase. Youâll also find a collection of Altenburg food and drink specialties produced around the region like mustards and liquors. 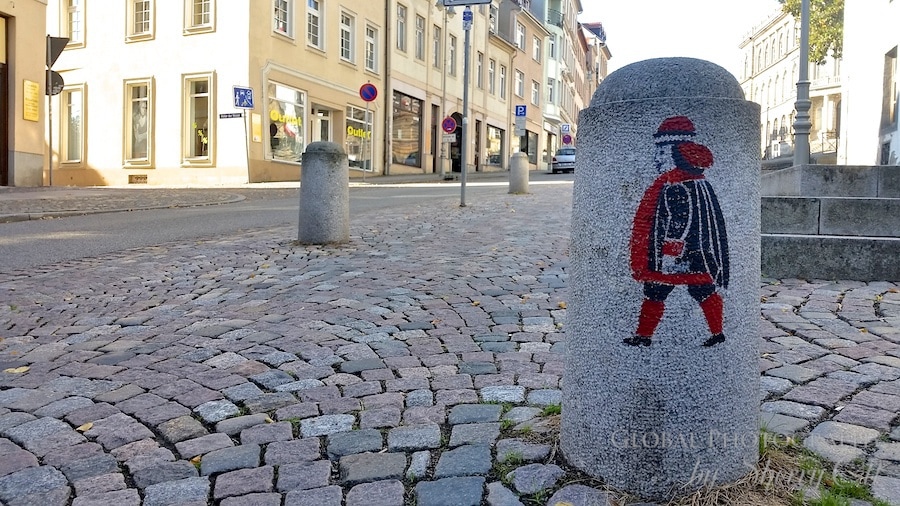 Follow the playing card trail to hit all of the Skat sites.

Look closely at your feet while walking in Altenburg and youâll find a trail of cards that leads you to all of these aforementioned card spots! Follow the Card Route symbols and you will be led through town to the former houses of card makers and the house where Skat was invented.Â  In addition it takes you to the castle and museum,Â  the fountain, theÂ  Skat association, and the meeting places of the Skat Court in Hotel am RoÃplan, and of course the playing card shop. The entire walk takes about 3 1/2 hours plus the time to eat lunch and strudel at RoÃplan!

Itâs not just about cards, Altenburg was full of surprising sites, I was actually pretty sad that I only had a day there. Not only was it a beautiful old East German town that felt as if it was just now being rediscovered, it also had a beautiful castle, town square, distilleries, and an amazing variety museums ranging from fine art to obscure.

The collection at Lindenau Art Museum

This was a special travel day for me; the perfect combination of learning something new, cultural, meeting locals, and getting back to my German roots. And next time I play Skat, Iâve got President Sosic on speed dial to answer any questions or settle disputes!

Other Altenburg Things to Do

Lindenau Art Museum â a surprisingly impressive collection of Italian Renaissance altar pieces, ancient sculptures, antique Etruscan ceramics, expressionist drawings, modern art work, and seasonally changing exhibitions. Bernhard August von Lindenauâs goal was to bring the art to the people who could travel the world to see all of these great works. So he brought it to Altenburg. The museum is also an art school.

Barber Shop Museum â stuck in time and completely left as it was in 1929 when barber, Arthur Grosse, mysteriously left his shop and never returned. This place is a hoot â see old hairdryers and curling irons from the 1920âs and flip through old hairstyles from the magazines left there. A true step back in time.

Where to stay in Altenburg – Hotel am RoÃplan on Booking.com

My time in Altenburg was hosted by Germany Tourism, however all opinions here are my own.

3 Responses to "Town of Cards"