7 Things You Learn Inside a Restaurant Kitchen

7 Things You Learn Inside a Restaurant Kitchen

They appeared to glide around the small space as if they had been dancing together for years. Each knowing the other persons next move; it was beautiful fluid movement however it wasnât accompanied by the typical German waltzing music. There was no music at all; the only noise was clanking pans, ovens slamming shut, and plates hitting the metal counter. A kitchen can be seen as a complex canvas of artistic expression, and seeing it in action can be poetic.

I found myself tucked in a small corner of the Gasthaus Zur Linde restaurant kitchen in Stuttgart Germany wiping the sweat from my brow. I wasnât working, I was simply observing. I had come here as part of my Made in Germany road trip to get a taste of the Swabian food of the region, and somehow I was been invited back to the kitchen to observe.

Iâve done my time working in kitchens while in college, and there is a crazy, hot excitement to them. Looking back on my lifetime of jobs, working in kitchens was the most physically demanding work I ever did. The Gasthaus Zur Linde kitchen was a tiny space, probably only 15 square feet with 1 Executive Chef, 2 Sous Chefs, and 2 servers coming in and out. It was mesmerizing to watch them all work together for a busy shift. I simply tried to stay out of the way in the corner to watch the action, and boy did I learn a lot.

What You Can Learn From A Restaurant Kitchen

It was hot in this small space. Very hot. There were broilers, ovens, and stoves pumping out heat. I was dehydrated immediately just standing in the corner. But the chefs were always looking cool and collected.Â  I never saw them sweat! I suppose, much like living in Vietnam, your body adjusts to the heat and sweats less. Or they are just super humanâ¦not sure. 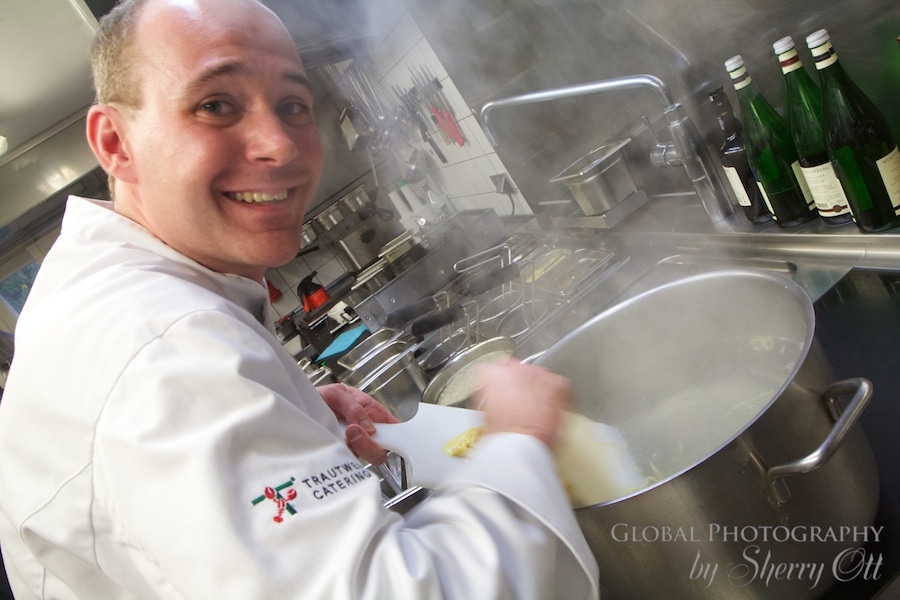 Chef Ferdinand getting a steam bath and still not cracking a sweat!

Itâs like a choreographed dance, everyone knows what to do. I watched them all move about in a small space with hot pans and trays – and you could tell they they had worked together for a while as they seemed to know each others next move. A complex game of twister in which there is no such thing as personal space. Teamwork! 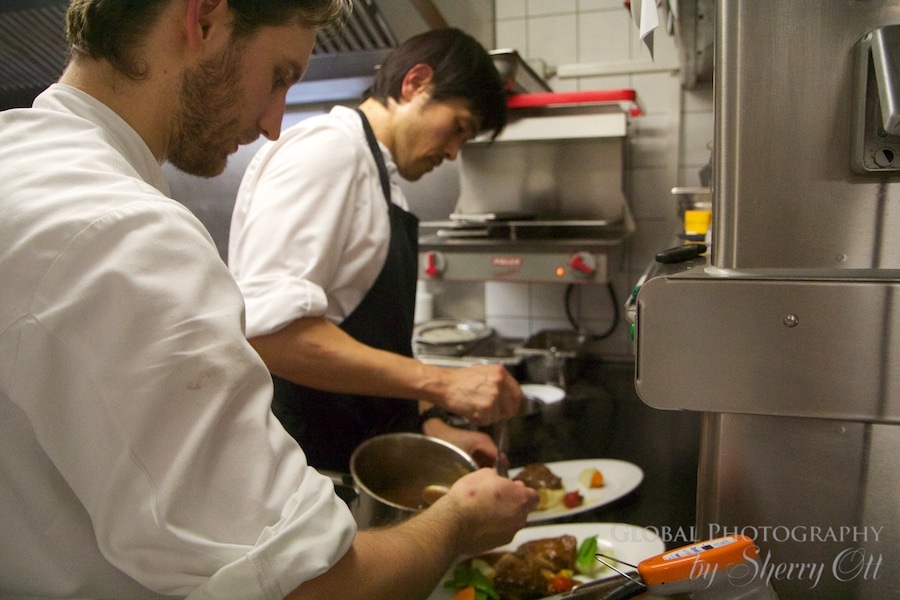 After seeing them make the same dishes over and over and over again â even I didnât crave that steak the same way I did when I saw the first one. Itâs work, I get it. And when you make that steak or salad 35 times in a night, it no longer looks appetizing.

4. How to Communicate While Barely Saying a Word

5. How to Be Prepared

Most things are prepared ahead of time. Sauces, dressings, sides, butter garlic mixtures, spice mixtures, diced vegetables; they are all prepared to make you as efficient as possible.Â  I need to adopt this into my cooking routine! 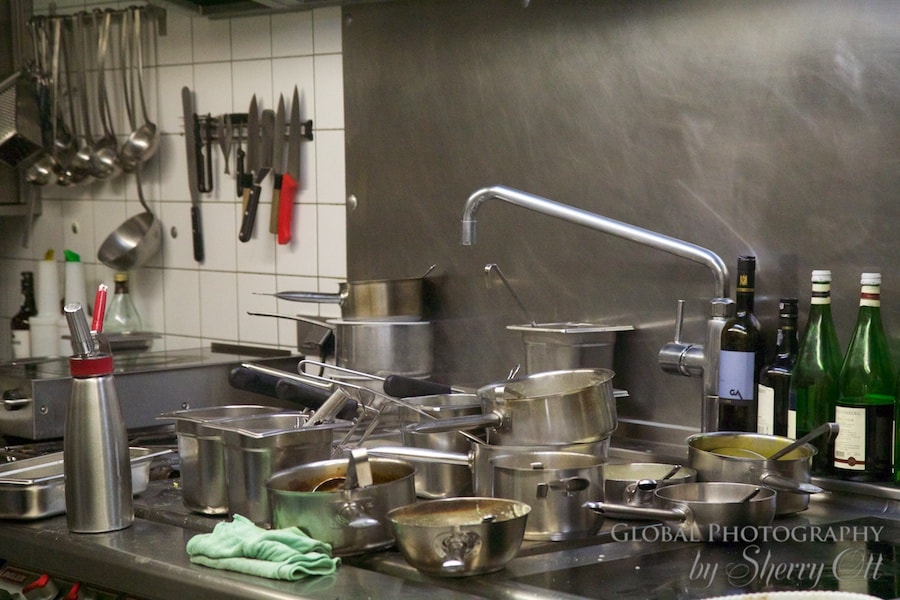 6. Have Plenty of Spoons

The kitchen should have plenty of spoons on hand for the chefs as they are always taste testing. I was amazed at how often they would quick taste something before putting it on a plate â something I always forget to do at home!

There is no downtime to relax. When you have a free moment you are using your time to clean your space. Each station was cleaned off every time another round of orders disappeared out of the kitchen. This was a small kitchen so dishwashing was also done by teamwork and whomever had a free moment. 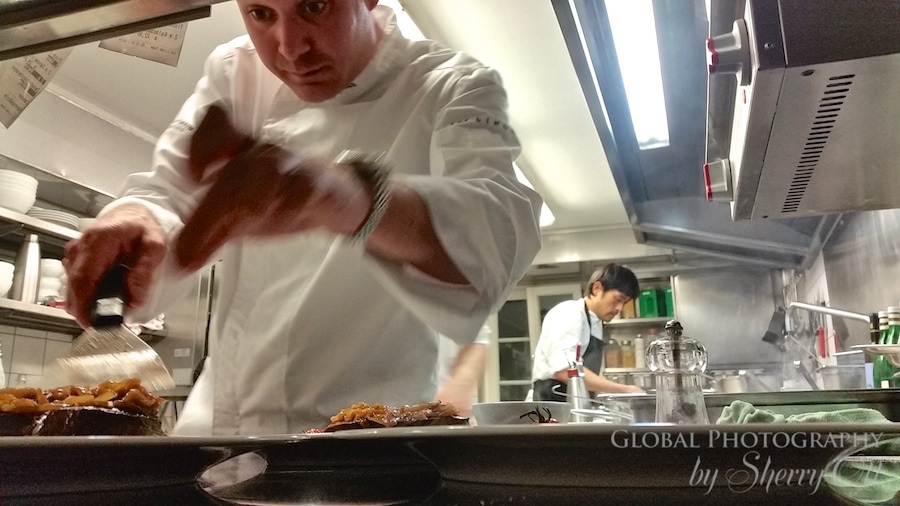 After all this observation it was time to try Swabian food for myself. Coming from the southwest region of Germany, Swabian food is dominated by the egg noodle with the popular dishes of Maultaschen and SpÃ¤tzle. Maultaschen is basically Swabian ravioli served with potato salad and buttered onions.

The ravioli which is filled w minced meat, egg, and spinach.

Chef Ferdinand showed me how he makes the ravioli

Chef Ferdinand Trautwein studied in Stuttgart, where he grew up. His father was a chef and he comes from 3 generations of restaurants. He and his brother (also a chef) got their start doing catering. They recently started the Gasthause Zur Linde located in a 300 year old former stagecoach inn providing an old, homey atmosphere. Chef Ferdinand and his team were putting out food like your German grandmother would make; simple, hearty, comforting, and uncomplicated. With that description I would date it if I could.

However I was date-less for the night, so that meant I didnât have to share my delicious Swabian food with anyone! I had the Maultaschen for a starter and the Zwiebelrostbraten (steak w spaetzle and buttered onions) as my main. I also tried the lentils with bacon, and sauerkraut. I think my favorite thing about German food is that they do sour/tart better than any other place in the world. Vinegar in all of the food is the one common thread around all dishes – a little tartness in just the right proportions. And of course all of this was accompanied by German wine of course.

Lentils with bacon and SpÃ¤tzle

I walked out of the Gasthaus Zur Linde fat and happy. Plus, I learned how poetic and complex a restaurant kitchen can be! After watching them put out dish after dish, I got used the sounds, processes, where things went, and the order in which to make them. I told them I was ready to come back tomorrow and wear an apron!

Have you ever worked in a restaurant kitchen? Â What did you learn? Â Share in the comments below!

I was a guest of Germany Tourism while on my Germany road trip, however all opinions here are my own.

One Response to "7 Things You Learn Inside a Restaurant Kitchen"