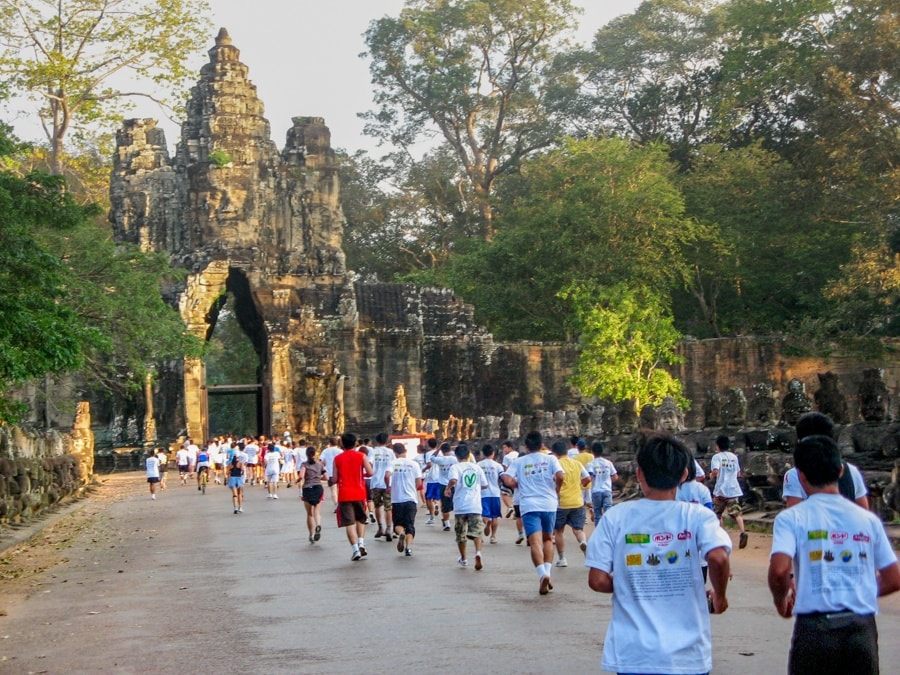 The beginning of the half marathon!

There are a few places in the world that everyone should see, Angkor Wat is one of them. As most of you know, I am someone who hates to do what everyone else it doing; so I took it a step further last weekend. I didnât just see Angkor Wat, I ran Angkor Wat. My sister had participated in the Angkor Wat Half Marathon and 10k a couple of years ago and raved about how much fun it was. Since I found myself only a short 50 min. flight away from Siem Reap, I thought I better run on over there and check it out myself.

The first problem was that I had to train up to 10k in order to run the race. This normally wouldnât be a problem for me as Iâm a lifetime runner, but living in Ho Chi Minh City presents some running challenges. The biggest challenge is that there is no where to run in HCMC. I promise you that Iâm not being overdramatic when I say that. Besides the fact that there are very few small parks in HCMC, there are also no sidewalks that arenât occupied by parked motorbikes, people eating Pho, or simply people driving on the sidewalks. Like the rest of Asia, Vietnamese life spills out of their homes and into the streets. A sidewalk in front of your house is not considered public walking space, instead is your own private patio where you gather with friends. After you get by the issue of where to run in HCMC, next the issue of how to breath comes into play. With 6 million motorbikes, the pollution is terrible. 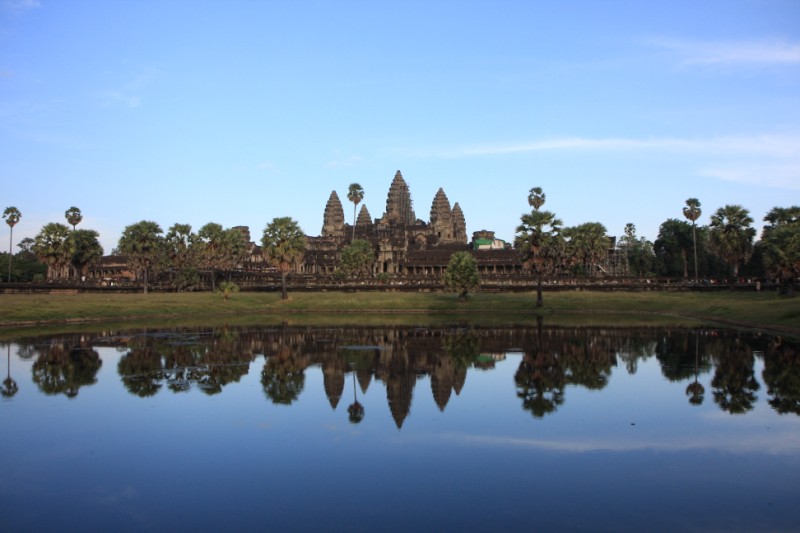 Ah â but this post isnât about Vietnam â itâs about my adventure in Cambodia! My visiting friend from San Francisco, Colleen, and I took off from HCMC to Siem Reap to meet my sister, her husband and her other running friends. My sister had promised me that the weather would be cooler than the normal HCMC 90 degrees and high humidity; I was skeptical, but when I stepped off the plane and felt a cool, fresh breeze I was in heaven! At last, something under 85 degrees!

As we rode into town to our little hotel to meet my sister and friends, I was immediately lost in my own little world of memories. I had been here before, 20 months ago during my around the world travels. This was one of the first places that I had come back to and it felt strange to me. I was overcome with the feeling of longing for my past travels. Once again Iâm reminded of how much you ache for something when itâs gone. Much like old loves, Siem Reap threw me into a spiral of memories that I wished I could have back. At my core, I really dislike going back to someplace Iâve been before, and maybe this is why. 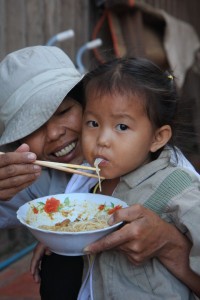 Siem Reap felt so different from HCMC, it was a small town, quiet, slow, and simple. I didnât know how much I had missed that until I was here in the middle of it again.
We met up with my sister, Cyndi, and my brother-in-law, Frank who were both planning to run the half marathon. The marathon started early the next morning at 6:30am to take advantage of the sunrise and cool temperatures. Luckily Frank is not a procrastinator like me, so he had everything all set up for the next day including our tuk tuk rides to the race.

Now there arenât many organized long distance races in SE Asia for a reason, because not many SE Asians run. This fact meant that the numbers in the race would be low and the organization of it would probably be sub-par compared to the well oiled machine of New York Road Runners Club that I was used to. The run was sponsored by a charity â specifically it was a ârun to bring artificial limbs to land mind survivors and save youth from HIV/AIDSâ according to the brochure, so I was ok with paying the $50 entry free. They were expecting about 2,300 participants for all of the events arriving from over 40 countries. 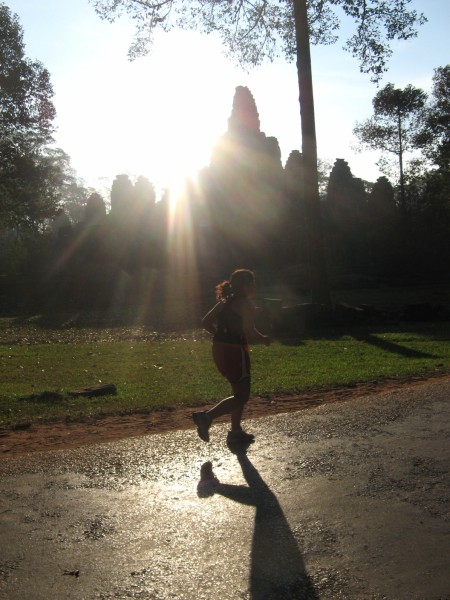 Running through the Angkor Temples

At the early hours of the morning under a sheet of darkness and a slightly cool breeze (probably about 75 degrees), runners arrived via tuk tuks drinking their Gatorade, and looking for the nearest bathroom. A loud, tinny speaker blared out instructions in Cambodian, and were followed by a difficult to understand version in English. Even my well trained ESL ears couldnât make sense of the English instructions so I gave up on trying to understand where I was supposed to be and simply followed the crowd. There appeared to be about 1000 people running the half marathon and about an equal number running the 10k â a small, laid back race. The half marathon was filled with tall Caucasians and short Japanese runners; people from all countries, but not many Cambodians!

The half marathon started first and Colleen and I cheered them on as we stood at the foot of the bridge leading to Angkor Wat â a surreal felling. Next it was my 10k start. The 10k was full of Cambodian students and a mixture of nationalities, and even a guy dressed in a monkey suit. Itâs nice to know that there are crazy mascot wearing runners everywhere in the world. I nodded acknowledgment to the monkey and set my watch.

I had decided to bring my point and shoot camera with me to the race. After all, when would I ever have the chance to photograph runners racing through ancient temples at a World Heritage Site? This really felt like a special experience that I needed to digitally capture. As the race started and I passed the slow untrained runners and I was immediately conflicted. My competitive side and my artistic side of my brain were battling each other in a major war in my head.

Do I kick it in and really race the 10k and possibly place in the event, or do I sit back, have fun, and capture the pictures for my website. Hmmm â what to do, what to do?

Art won out over sport. I put myself in low gear and enjoyed every moment of the race. I even would run backwards to go back and take a picture that I liked! My favorite part of the race was seeing and interacting with the spectators. They looked at all of us with a confused curiosityâ¦silently watching us run by. Colleen cheered us on as our own personal cheerleader; I think the locals were more mystified by her antics than the runners coming by! The water stops were run by young kids in their teens, handing out bottles of water to all the runners coming by. The younger kids would then follow you until you dropped a water bottle which was akin to dropping a $1 bill on the ground to themâ¦recycling means moneyâ¦even in Cambodia. Some kids would stand out in a line and hold out their hands for âhigh fivesâ from the foreign athletes; a true cultural exchange.

As I came up on the finish line, I stopped one last time to take a picture; somehow I still managed to come in under an hour and take about 30 photosâ¦now thatâs talent! Everyone in my brood finished well and had a wonderful time telling stories of how great the route was. We spent the afternoon drinking beer and touring around the temples at a slower pace, while trying to avoid stairs. My first international race was one to remember, and one that I would definitely recommend to any runner out there with a penchant for travel and exercise! 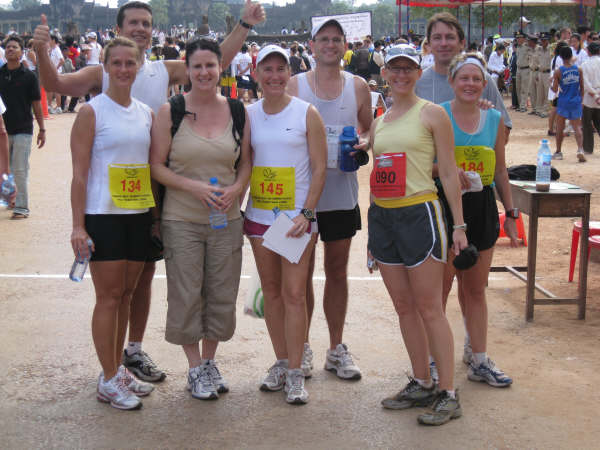 If you are interested in making a trip to SE Asia to run this unique race, you can find more information here:

Run Angkor Wat Half Marathoon and 10K
Lodging: La Noria Hotel
Bars: FCC – the best cocktails in Cambodia!
Restaurants: Pub Street for cheap food and people watching.
Transportation: Tuk Tuk…they are the best and cheapest way to get around!

4 Responses to "Running Among Gods"