Rice Culture – Travel in the Philippines 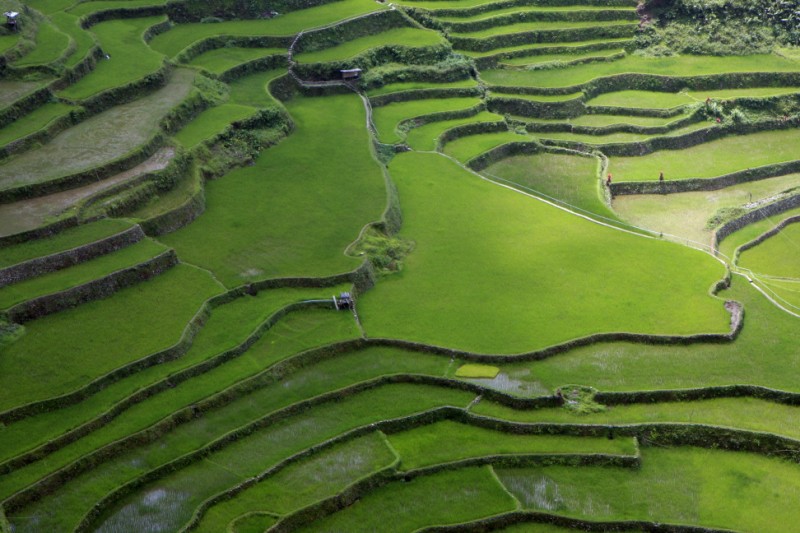 I love rice. Rice pudding, fried rice, red beans and rice, rice krispies, wild rice, sticky rice, and even young rice ice cream (there really is such a flavor in Saigon!). I even applied to be on the show Survivor once; that’s how much I like rice.Â  However my passion for rice pales in comparison to Filipinoâs passion for rice. The Philippines is all about rice. They eat it for breakfast, lunch, and dinner. This is probably why there are thousands and thousands of rice terraces dotting the landscape up north. As I traveled through the north, I learned how their lives and traditions revolved around rice; 2,000 years of rice culture.

I had hired Nora, my female trekking guide to join me for 4 days and 3 nights while in the Banaue region. She put together the most sensible itinerary and helped me find some lodging in Banaue at the Fairview Inn Guesthouse. It was a modest little guesthouse outside of the town proper with a lovely terrace and view of the town/mountains and rice terraces. I was able to negotiate a double room for the price of single room ($10US) since I seemed to be the only person there! The hotel had all of the necessities; hot water, electricity, a cafÃ©, and it was run by a lovely couple, Benedict and Raquel, who spoke great English, and were a joy to talk to. What I liked the most about the room was the view and the fact that it was quiet. The only noise I could hear was the roosters which seemed acceptable after living in Asia now for 6 months. 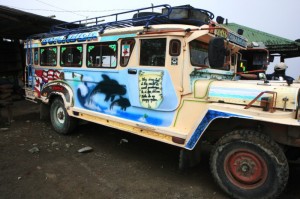 Nora and a driver arrived to pick me up at Fairview Inn. There are basically two main forms of transportation in this area â Jeepney and Tricycle. I really didnât know what either was until I arrived in the Philippines and saw the old beat up vehicles. Jeepneys are old, long jeeps which transport many people (sort of like a bus). They were originally made from US military jeeps left over from WWII; they have now turned into an artistic expression of sorts â colorful and flamboyant. Tricycles are a motorcycle and side car that is enclosed a bit like a passenger cabin. Since I was a solo traveler with a guide, the best and cheapest way for me to get around was via tricycle. 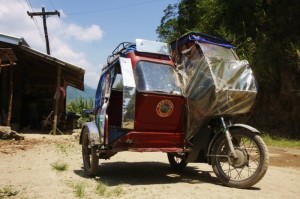 Before my tricycle pulled up, I had visions of my first childhood tricycle; it was yellow with big, fat wheels. I loved that bike and rode it like a terror until I finally graduated to the Barbie pink, 2 wheel, banana seat version in kindergarten. The tricycle that picked me up to go to Hapao was nothing like my little yellow trike, except it had the obligatory 3 wheels. This trike was dusty and beat up; kind of resembling something out of a Mad Max movieâ¦I felt as if I were going to war when I climbed in my little beat up side car.

Nora warned me to hold on so I wouldnât hit my head as we would surely get jostled around on the unpaved mountain roads. She sat on the back of the motorcycle side saddle and I had the little side car to myself. Yazzer, our driver, handled the dirt roads with ease as I bounced around like a bobble head doll for an hour thinking to myself â these terraces better be worth it! I came to the Northern Philippines in order to get some fresh air and exercise. However, somehow I found myself sucking in noxious fumes while sitting in the little side-buggy, climbing up a bumpy, dusty mountainside. My lungs were burning, and my ass hurtâ¦this definitely wasnât relaxing! 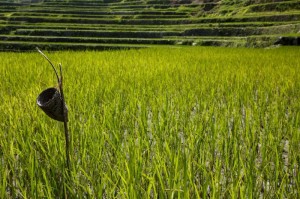 Hapao was a lush, green valley of terraces with a lovely church in the middle of the valley and a river running down the valley separating it into two halves. Nora was from the town of Hapao so it was fun to trek around the terraces with her and meet various people and hear some of her childhood stories. Most of the traditional Ifugao houses have been replaced by newer homes made of sheet metal and bricks, however the village life was still rather simple and revolved around the rice terraces.

Terraces are handed down through generations; however, there are rules when it comes to âgiftingâ the terraces; no they donât fall under complex gifting tax laws, itâs just some simple rules. The eldest child in the family typically inherits all of the terracesâ¦yesâ¦.all of the terraces. The youngest child inherits the family house. The middle childrenâ¦are apparently screwed! Sure, it doesnât seem very fair, but itâs hard to judge 2,000 years of tradition. (in case you were wondering, yes, I am the youngest in my family)

The work in the terraces is split between the men and women. The men do all of the repair and preparation of the terraces; fixing walls, draining, irrigation, etc. The women are responsible for the planting, harvesting, and upkeep of crops. The kids also have responsibilities from an early age and are expected to carry their âloadâ helping their parents and relatives. All of the rice grown in this area of the Philippines is for family consumption. As you look around the vast terraces, you would think that a family would have more than enough rice; however, after seeing that that Filipinos eat rice for every meal, you start to realize that thereâs never enough rice; itâs a bottomless pit. 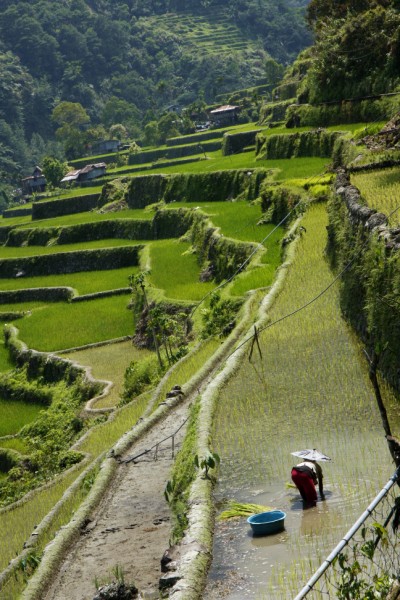 Trekking through the Hapao terraces was hot and challenging, but the views were worth it. We moved from the various levels of terraces via little stones built into the walls that stuck out about 6 inches. These were your âstepsâ up to the next level. These little stones werenât built for size 9 feet, so it was challenging as I teetered to get my balance before I fell 15 feet into the muddy rice paddies; all the while with my camera equipment slung around my neck. The trekking wasnât particularly hard, instead it was technical and required good balance. As Nora watched me and my big clown feet lumber up and down the levels of terraces she asked me if I wanted to get a porter the next day. I was dripping with sweat and decided that a porter sounded like a good idea for a cheap price. Sure, there was a part of me that didnât want to be a wimp; however, I also know that having a porter would allow me to focus more on photography â so I agreed to splurge $10 on a porter for our remaining 3 days of trekking.

We stopped at some of her relativeâs houses/huts and had wild berries off of tree branches and a hot cokeâ¦a much needed refreshment before we descended back down into the valley for a quick dip in the cold river. The river was heavenly allowing me to cool off a bit and relax before we got back into the Mad Max tricycle for our bumpy ride back to Banaue.

That evening I was exhausted. I went to the town center and had the traditional Filipino dish, Adobo, and a beer. Adobo is a meat dish cooked with garlic, soy sauce, and vinegar served with rice of course; a must try while visiting the Philippines. It was a long day since I had stepped off the overnight bus this morning at 8AM, determined an itinerary, commuted 2 hours via trike, and hiked for 3 hours. I collapsed into bed early with my belly full of rice and happy with my decision to hire a porter the next day. Sweet dreams.

7 Responses to "Rice Culture – Travel in the Philippines"