Not so Sweet Dreams â Langkawi 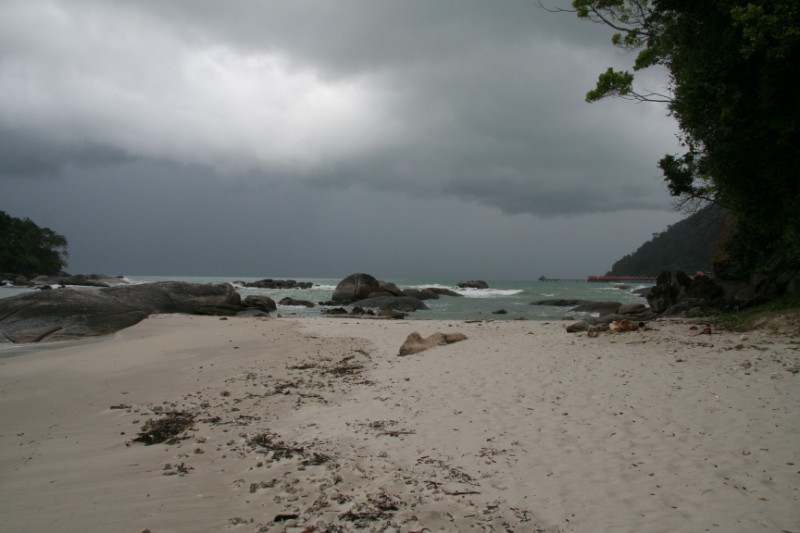 For all snapshots of Langkawi – click here!
Iâm enjoying a perfectly relaxing serene week on a sunny beach in Langkawi Malaysia with my family. Iâm taking a vacation from my traveling. I write, catch up on reading, work on my tan, brainstorm on ways to make a living, play games with my nieces â yet I awake in the middle of the night overcome with a feeling of despair.

Iâm having nightmares. Not the kind where someone is chasing me with a machete through a dark, deserted forest in the pelting rain. Nor am I dreaming my normal reoccurring anxiety nightmare where I am trying to drive up a steep hill in my old Ford Escort and I am still spinning my wheels as I loose ground in 1st gear and start rolling backwards down the hill.

Instead, I dream of being back in NYC seeing my old friends. I look around at the familiar faces and places and have no idea where I fit in any longer. In NYC, people define themselves by their job, their neighborhood, and where and with whom they socialize. However, I no longer have these markers to define myself.

Instead, I have a depleted savings account, millions of words in a website, and thousands of photographs. How does my new year of experiences define me? In my dreams my friends busily rush around me as if Iâm standing still â they are busy and caught up in a world that is foreign to me. I wake up feeling deeply sad and unsatisfied. This is why I still havenât bought my plane ticket home. I suppose going back is as scary as leaving was for me 15 months ago. Iâm scared to go home.

Regardless of the restless nights, I try to tell myself to push on â live in the moment â enjoy your last two months. Have fun hanging out on the beach in Malaysia, hanging out with my nieces, and drinking booze by noon every day. After all â thatâs what the Malaysian island of Langkawi is about. Itâs this little oasis near the Thai border. The southern Thailand border is not normally where I would want to be â however the island of Langkawi is perfectly safe. We have been staying at a little 3 star resort, Mutiara Burau Bay Resort with our own beach bungalows. The kind where you can hear the waves crashing on the beach at night while you fall asleep. Weâve been dodging the monkeys, and hopping the waves. In fact â weâve barely left the premises for the last 5 days as the beach is so perfect and lazy.

During the few moments we did actually leave our resort, we rode the cable car in order to get an aerial view of the island and neighboring Thailand. One late afternoon we hiked to a waterfall, and one day my father and I went sailing. The boat was about 40 ft, and well stocked with booze. In fact, one might simply call it a booze cruise as opposed to a sailing adventure! While on the sailing adventure I realized where I get my sense of adventure fromâ¦my father. I watched him socialize with everyone on the boat, talk to them about where they are from, talk to the crew, talk to the captain, drinking beer, laughing, and making otherâs laugh. I was a bit awe struck at his ease of communications. This couldnât be the same man that kept to himself my whole teenage life â could it? This happy-go-lucky man couldnât be the same person that I was terrified to tell that I wanted to major in Business and not Engineering in college. Apparently, time does change your perspectives.

Our sailing day included eagle feeding, boating through mangrove forests, fishing, and kayaking. I thought I would give fishing a try â after all â it looked pretty simple. There was no fishing pole â just a fishing wire with some weights at the end and a hook to put the bait. You simply lowered the wire into the water until it hit bottom, pulled it up about a foot and waited to feel a nibble. Then the real fun began! I ended up catching 5 fishâ¦granted â there were no big onesâ¦but they were good enough for our crew to take home to their families that night for dinner I sat there on a bucket â with a beer in my hand, and the fishing wire in my other handâ¦I felt like I was getting back to my Midwestern roots! Yet, I never did figure out how to muster up the guts to take the floppy fish off the hook and put it into the âcatch bagâ. I failed at that skill!

Next â thanks to pressure from my Dad, I ended up trying out the great new adventure sport thatâs sweeping the world…Jacuzzi Sailing. This basically included the crazy process of jumping off the high bow of a moving boat, surfacing quickly and reaching onto a rope while the boat was passing you by. Once you had a hold of the rope, you could pull your body up onto the big rope net that was connected to the side of the boat. Once in the net â you could lay back and relaxâ¦wellâ¦except for the fact that you toes were clasped like a leach around the rope trying to hold on for dear life! The whole process was a bit daunting. I walked the âplankâ out on the bow, took the leap (thanks to the âno fear beerâ in my system), as I was under water I realized there was no time to worry about my bikini top that was twisted as I had to surface quickly before the boat passed me! Once I crawled up the netting, clasping onto the net for dear life as the current of the moving boat tried to leave me in the dust, the crew threw me another beerâ¦perfect. Now I had the added challenge of trying to drink a beer while laying in a net with my feet wrapped around the ropes like a monkey refusing to let go. Waves came crashing around the boat as we broke through the open sea sending my net undulating and me with it. I held my beer up high trying to keep it from getting consumed by the sea, but it was nearly impossible to avoid the salt water from getting inside the can. That was ok though â it then just seemed as if you were drinking beer and eating salty peanuts at the same time!

On our last night in Langkawi we sat around the resort lobby, had ice cream sundaes, and played cards. To our surprise, we were also treated to a real piece of history. The first Malaysian astronaut was launched into space. It was all televised live, everyone was singing Malaysian songs, and full of Malaysian pride. It was a fun thing to witness as an outsider, and a historical moment for all of Southeast Asia. Malaysia apparently struck a deal with Russia to join on one of their launches and send a doctor to the International Space Station. Not only was it the first Malaysian astronaut , but he was also Muslim, therefore they had to determine which way he would face in the space station for daily prayers towards the ever-moving Meca while in orbit. I take space travel for granted these days â but this was a momentous occasion for the country and Islam, and I was really happy that I witnessed it.

Yet even with all of this relaxation, family, fun, and beer in Langkawi â I still wake up in the morning uneasy from my disturbing dreams of returning home. I believe that spending time with my family and having an end of my travel within view has intensified my feelings of fear and confusion. I had a lot of free time to sit and think on the beachâ¦maybe too much time as evidenced by my ânot so sweetâ dreams. Why is it that when Iâm in my travel groove interacting with other vagabonds and travelers all of my small business ideas and future plans seem normal, do-able, and exciting. But when I talk about these same ideas to my family or in the context of life in NYC â they all seem like a silly, childish dream?

Time will tell what will really happen when I return to NY sometime in December (no, I still donât have a ticket home) â but for now, Iâm trying my best to simply enjoy the beach, and a beer with family.

7 Responses to "Not so Sweet Dreams â Langkawi"