A Father, A Daughter, and Some Chinese Food â Beijing 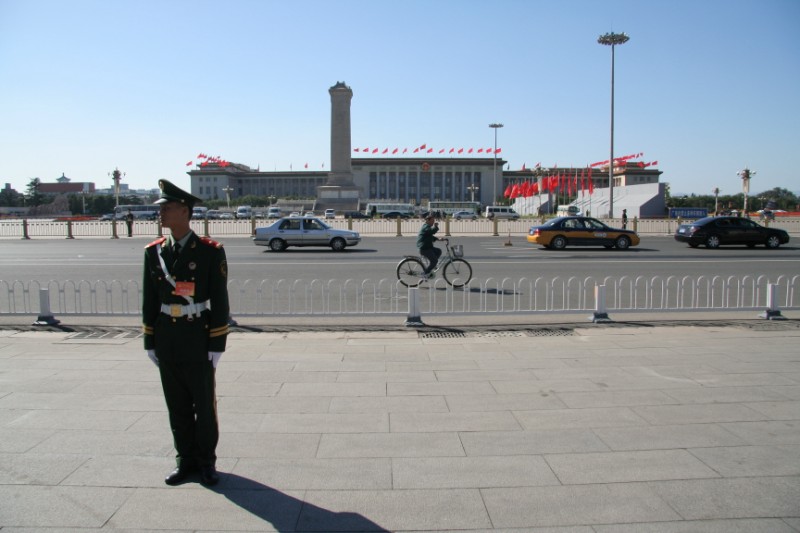 Guard in front of Tiananmen Square

For the ‘best of’ Northern China Photography – click here!

To see all snapshots of Beijing Sites – click here!

When I was about 12 years old, I was treated to my first memory of international cuisineâ¦Chinese food. I will never forget going to a Chinese restaurant in Peoria for the first time. It was darkly lit, with big round tables and little cups for tea. I was fascinated with these cups because they didnât have handles – pretty unconventional for the Midwest! Regardless, the tea flowed endlessly. My dad ordered some dishes for our table â sweet and sour pork, wontons, egg foo young, and pork chow mein. I remember being that awkward age that hated eating anything that I didnât know, but wanting to try new things. I had no idea how to use the chopsticks in front of me â they seemed as confusing and impossible as solving my rubicâs cube. From this first experience with Chinese food, a tradition started to form in my family â Chinese food was something I did with my dad. Whenever my mother went out of town and my dad and I were left to fend for ourselves, he would always take me out for Chinese food at Chanâs. Chanâs was in a âbadâ part of town â and I have no idea how my father knew about it â but for me, it was my place I went with my dad. Therefore, it seemed fitting that my dad accompany me to China on my around the world journey.

My father is 71 years old, fit, and he enjoys adventure. Therefore I was pretty confident about putting together an active China itinerary that included Northern China. We had 8 days and planned on spending time in Beijing, hiking on the Great Wall, and seeing Xian and the Terra Cotta Warriors. We arrived in Beijing late at night in darkness. When I opened our curtains the next day I was surprised at what I saw outside of my window- Buildings as far as the eye could see. Granted, I expected buildings in Beijingâ¦duhâ¦but I never expected to be able to see clearly for miles. China has the reputation as âThe Worldâs Factoryâ and every time I told someone I was visiting China I would always get the same reaction â the smog is terrible! Therefore, my expectation when I looked out the window was to see the yellow haze lingering about â but instead I was greeted by clear, blue skies. One might say that we were luckyâ¦or one might say that China was welcoming usâ¦I like the latter.

I must admit â planning this trip to China wasnât easy. First off â I wasnât just planning it for myself. I was planning it for my father, someone that I knew very well, someone that I felt responsible for pleasing. Granted â I had traveled with many different people in this last year of âaround the world adventureâ â some people that I knew very well, and some people that I didnât know at all, but formed new friendships with. However â I knew my father better than anyone I had traveled with previously â and I wanted to make sure that he would enjoy himself, yet at the same time be able to experience a small part of what I had experienced in the last year of travel. There have been countless times this last year when Iâve been in a country and thought to myself â âI wish my father could see this â he would love it.â So here it was, my chance to finally realize that. Not only did I have to figure out an itinerary that both my father and I would enjoy, and would be appropriate for a 37 yr old and 71 yr old could both enjoy â but I had to deal with the China travel agent maze. China isnât like the rest of the world â you canât simply research on Google and book your own itinerary which I had become so accustomed to. You canât just âwing itâ through the country too easily. You canât even book a domestic air ticket easily. China is tightly controlled and so is their travel industry. Therefore the first step was to find a good travel agency in China that you could communicate with (harder than you would think) and could be flexible. Once you found one that actually returned your emails, and understand that you were looking for a customized experience as opposed to a huge tour bus full of blue hairs and matching baseball hats â then you still had millions of emails back an forth to get it all worked out. The icing on the cake is when they donât take a credit card online for paymentâ¦and you are forced to fax credit authorization info to them. However â once you are able to work through this long process and feel comfortable with an agency â you can move forward and actually book a China trip. I chose Beijing Xinhua Tour Company since we were mainly focusing on the Northern China area and Beijing was our âbaseâ â plus Betty, the sales agent, understood English and answered my emails in a timely basis.

Our young guide, Roseanne, was a petite, young woman with flawless skin that looked like porcelain â looking at her made me wish I had worn more sunscreen in my youth, as well as put on a second coat presently. She was bubbly, kind, and knowledgeable. She took care of us in a wonderful manner. I think it actually beneficial to be traveling with my father since most Asian cultures have a deep rooted respect for their eldersâ¦therefore Roseanne and my father got along famously. We had a full day planned in Beijing as this was really the only day that we were in the city to see the sights. We went to the 3 major sights that day â the Summer Palace, Forbidden City, and the Heavenly Palace. We were also supposed to stop and walk through the infamous Tiananmen Square – however the National Congress was meeting that week in government buildings surrounding the square…therefore it was closed! We were dejected a bit – but didn’t lose any sleep over it. We could see it from a distance.

The skies were picture perfect – a stunning blue, a cool brisk breezeâ¦I found myself having deja-vuâ¦for fall. I missed Fall last year because I was in New Zealand and South Africa traveling on the other side of the globe in a different hemisphere experiencing Spring. I stood in the Summer Palace learning about the Dragon Lady that bullied her way into ruling China during the Qing dynasty, yet I was mesmerized by the feeling of Fall. I sucked in a deep breath â one that made me think of pumpkin pie, Central Park, and the NY Marathon. I wrapped my pashmina around me and enjoyed the memories floating through my head. The sites were interesting to see â an ancient world that was hard to understand and imagine â a world of opium, concubine, great beauty, and unrest. A land where they didnât record things based on years â but on Emperorâs reigning years. According to this I would have been Sherry, born on the 12th day of the 2nd lunar month of the Nixon Dynasty.

Beijing was surprising to me â it wasnât exactly what I expected â a city of 14 million people was a bit mind boggling to me. The traffic was a stand still, much worse than any commute I had seen in NYC. As I sat in the car stuck in traffic I was stunned by the number of construction cranes I saw surrounding me. This city had the most construction in progress than I had ever witnessed. The cranes were as plentiful as the trees. They cranes were all lording over newly formed apartment high rises and business buildings. I looked around at my landscape and thought to myself that Beijing resembled NYC, with itâs numerous, tall buildings rising into the stratosphere. However â it was as if someone took the island of Manhattan and stretched it out as if it were silly putty. The buildings were spread apart, the roads were wide, and the sidewalks were big. This was the definition of âsprawlingâ. The spaciousness of it all made it feel a bit cold and stand-offish.

After a day of touring, we went to a Kung Fu show and finally back to our hotel to have a couple of much needed beers, peanuts, and spring rolls. We reminisced about our old trips to Changs on Main St. in Peoriaâ¦our special âmom is out of townâ activity, my first real international experience. It was so vivid to me â I was no longer 37â¦I was 12 again â simply enjoying spending time with my father. It was a good start to our time in China. I think we struck a good balance of what I was looking for and what my father would likeâ¦.or maybe the beer at the end of the day was the key. Regardless â my dad and I both felt lucky that China welcomed us with blue skies, a great tour guide, and old memories.

2 Responses to "A Father, A Daughter, and Some Chinese Food â Beijing"