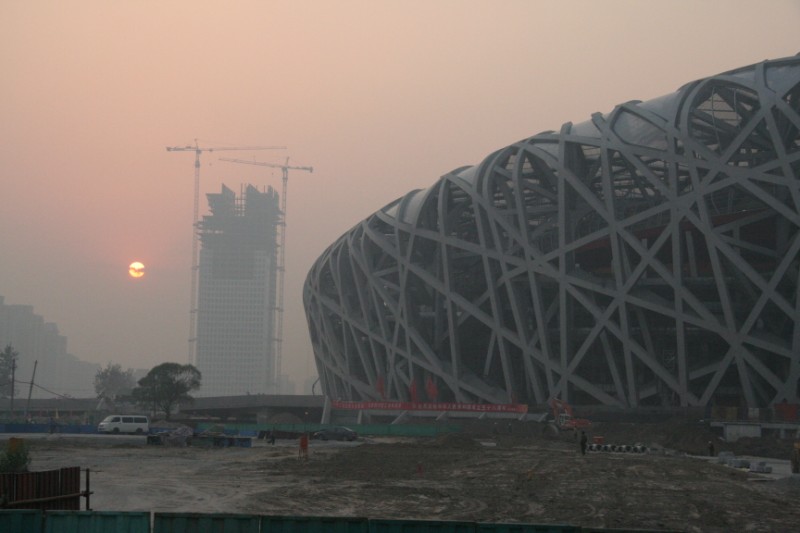 For all snapshots of the Olympic Buildings and smog – click here!

In less than a year the whole world will be introduced to China through their TV sets and a finely tuned production of the Olympics in Beijing. China, the largest populated country in the world will finally have a chance to show off to the world – but what will the world think? China is most definitely putting 1.3 billion people to work preparing for these games – at least that what it feels like as you wander through the concrete jungle of Beijing.

I am happy for them, I am happy that the world will get to see their country – a country that is a bit confusing to the westerner views, yet it actually is more western than one would think. This is not a backwards country that is impoverished or dirty. Instead, it is a country of skyscrapers, and construction cranes, of tradition, and superstition…and also of factories and power plants. The latter has an adverse effect – smog. The smog makes you feel as if you are inside a snow globe that has been constanly shaken up so that all of the particles are in the air above you – never really settling down into a clear view. I had never really experienced smog like this, and neither had my respitory system. After being in China for a few days I developed this hacking cough – I wasn’t sick – instead I was just reacting to the fowl air quality. All I could think about was all of the Olympic atheletes…how would they ever prepare for this? It certainly didn’t make me feel like going out and running.

We went by the newly constructed Bird’s Nest Olympic Stadium…the crown jewel of the Olympic buildings. It is nearly complete – however the area surrounding the stadium is torn up and home to a sea of hard hats – all busily working at getting the Olympic Village constructed. A short distance from the Bird’s Nest is the Water Cube – another architectural pleaser. This is the venue for swimming and diving events. I have no worries that China will complete construction in time – they are pro’s at construction and I have to believe that it is the industry that employs the most people in China based on the amount of half completed building I witnessed.

The Olympic marketing machine is also at full speed. The mascot is selling like the cabbage patch doll of the 80’s…and they look about the same too. The Marketing Olympics are bombarding you as soon as you get off the plane on the jetway – to your taxi, to the Forbidden City…signs everywhere, ads everywhere.

Photo: Beijing covered in a layer of smog…an everyday occurance

I am looking forward to seeing the final product of all this hard work next year – on the TV. Even though I enjoyed Beijing – there is no way I would want to be there during the Olympics…too crowded! Plus – by watching it on TV – I get to see all of the sappy stories that the television producers will spin. However – I really look forward to seeing how they will report about the air quality – it may be a more popular subject than doping…which is actually a welcome thought.