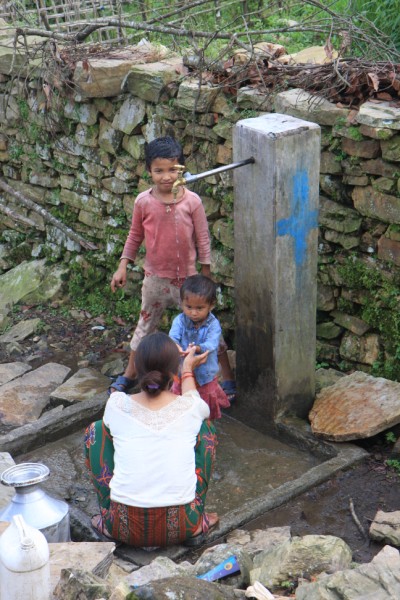 I think itâs happening â Iâm settling into my travel life a bit more. Iâm not fighting all of the change as much, and starting to accept. However, the key to all of this was to have some people to talk to. Today was a good day â I actually found some English speaking folks in the next village (about 30 min. walk away). At last, some conversation; it’s just what the doctor ordered! The Principal of the Puma primary school where I teach offered to take me over to the secondary school in Balungpani. I decided that I was up for an adventure, so I agreed to go along.

However, I started my day by finally overcoming my confusion and âfearâ of going to the public bathing area in the village to finally clean up a bit. I was feeling very gross after 3 days and I really couldnât take it any longer. Luckily there is only one small 5×7 mirror in the house I am living in â so I donât have to look at myself too often. I took my soap, shampoo, bucket, and towel up to the bathing and washing area and simply did the best I could dressed in running shorts and a tank top. I have no idea if I offended people or not â but at least I had clean hair â which improved my mood at least twofold. By the time I finished bathing I had a whole crowd of people watching me which felt a little strange, but I’m starting to get used to being the entertainment of the village.

When I came back to the house Didi had brought me a lungi, a traditional Nepalese wrap skirt, for me to wear today. She also came and provided me with a Hindu blessing placing some red coloring and rice on my forehead. She basically dressed me all up and sent me off to school. Even though Didi and I canât communicate too much, we have been getting by and I feel like my presence here is certainly welcomed. 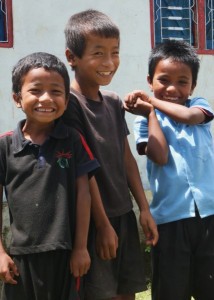 Today I taught the kids about body parts, and at recess I taught them hop scotch and we did a round of hokie pokie once I figure out what right and left was in Nepali. I personally think that the goofier I act the more the kids like me â they seem to get a kick out of the goofy foreigner with blonde (clean) hair. After school today the principle and I went for a trek to the next village where I was able to get the best therapy anyone could offerâ¦actual English conversationâ¦full sentences at last!!! The principle of the secondary school in Balungpani was a dream come true to me â he was fluent in English and we sat and talked about all the questions that had been burning inside of me for the last week. He drank tea and I had a Cokeâ¦oh joy; my first coke in a week! I think I was high from the sugar rush and the conversation! We even talked about politics. It was rather amazing that in a village with sporadic electricity he had seen Obamaâs acceptance speech and I hadnât. Once again â I was reminded that the rest of the world loves the US democratic party. He was pro-Obama all the way.

He took me on a tour of the secondary school and I was very impressed with what they had been able to do there thanks to many donations from various organizations. It was exactly what I needed to see â things that made a difference. It sort of renewed me in a way. They had just built a new 2 story building thanks to donations from the UK. 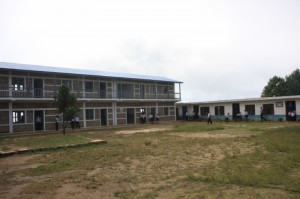 The principal, Bill, had networking down to a science; he did a great job of raising money for his school. The secondary school was attended by kids over the age of 10 from many villages around the area. Puma kids went there after they were 10 yrs of age. There was another volunteer there from the UK teaching English for a week. He was young and going back to University in a week, but I canât tell you how elated I was to talk to a native English speaker â someone to sort of commiserate with. I literally felt like I was tripping over my words I was so excited! 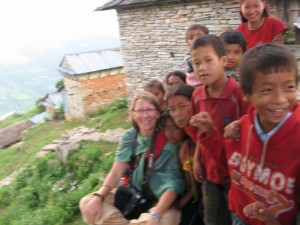 Me at the village 'stoop' with my constant crowd of onlookers. This is what it's like to be Angelina Jolie - kid's everwhere! PS - yes - I know the picture is blurry...but I had to try to teach someone to use 'the magjic' (how they referred to my camera)!

We came back to Puma and hung out on the stoop in the village (a lookout area that you can see down the mountain over the rice fields; the gathering place for people to sit and talk). In some strange way I was starting to feel as if I was myself again in this strange environment. I was interacting with people on various levels and thatâs what was most important to me. Later that evening Didi and I looked through her pictures of her family and had our typical choppy conversation. However, it is to get easier now.

As much as I hate this process of reconditioning myself, I also love it. The rewards are plenty.