The Ultimate Arctic Adventure – Drive the Ice Roads in Canada

The Ultimate Arctic Adventure – Drive the Ice Roads in Canada

It seemed so normal to be speeding down the road, the familiar rhythm of the tires going over road seams lulling you into your sleepy place. But it wasnât actually a road, it was ice.Â  And the sound wasn’t driving over seams â it was cracks and abnormalities in the ice that created the rhythm. And as long as I was driving on ice on the Arctic Ocean â there was no way I was getting lulled to sleep!

You would never know this ice underneath us would disappear in a month and there would be whales swimming around here. But thatâs what made driving the Mackenzie Ice Road to Tuktoyaktuk so special; it was full of surprises and jaw dropping moments.

Ice Roads â The Lifeline to the Arctic

Itâs weird to think communities exist in extreme places and have no roads connecting them to the rest of the world. How do they survive? How do they get supplies, news from the outside, do they ever get visitors, and do they even know what a cronut is? Like all cultures, you adapt.

Tuktoyaktuk, Aklavik, and Inuvik in Canadaâs Northwest Territories may not be connected by asphalt, but they do use the water and ice to stay connected. From May to October, the best form of transportation is a boat. From January to April, those same rivers and oceans freeze and roads are built on ice. The ice road system reaches out across the Northwest Territories to resupply communities and connect them to civilization.

For remote communities, the winter means freedom. They can finally use those cars they own and use the ice roads to get supplies, easily see families, and get to larger communities.

For tourists, the winter means an incredibly unique adventure. Few people get to see the Arctic Ocean, let alone drive on it!

When I travel, I find the cheapest rental car rates at RentalCars.com. Check out their prices for a Canadian Arctic road trip!

The Mackenzie River Delta from above. Rivers turn into roads

Riding on the Ice Road to Tuktoyaktuk

Driving on the Arctic Ocean

How the Coolest Road Around Works

The Mackenzie River Delta is the largest and longest river system in Canada, and itâs the 2nd largest river delta in North America next to the Mississippi Delta. The Mackenzie River is a winding water-world in the summer. But as the dark winter arrives, the river freezes and becomes the main mode of transportation in the region.

Inuvik, the largest community in the region, is connected to Aklavik via the frozen river and to Tuktoyaktuk via the river and the Arctic Ocean.

The Canadian government makes and maintains the ice road every fall by clearing off the snow, and checking ice thickness for safety. To ensure that the roads are safe, road crews now use ground-penetrating radar to check the iceâs exact thickness. They also put up signs and maintain the road during the months itâs open.

You won’t lose your way!

Is the Ice Road Dangerous?

I braced myself as I felt the van lose control and start sliding on the ice. Everything suddenly switched into slow motion; I saw the landscape around me spin around. I didnât scream, I didnât say a word. Instead I think I held my breath. It all happened really fast as we rounded a gentle bend on the frozen river. Suddenly the tires lost their grip and the van did a full 360 spin and the back end landed in a big snow bank with a thud. We were all fine thanks to the low speeds of the road, but as we all shuffled out of the van we realized our situation wasn’t great. The van was wedged into a packed snow bank, and it was going to take a little muscle to get it out!

We were driving the ice road in April with only a few weeks left until the road would be closed. I learned first hand the ice roads can be more dangerous at the end of the season. Normally the ice is really dry and cold all winter creating a lot of friction for the tires. However in the spring, late afternoon sun is out and the temps are a little warmer. This melts the ice under the tires, reducing friction, and spin-outs are more likely.

Luckily we had shovels, radios, and cell phones that used as we dug our van out of the drift. Also, there was no shortage of local help as other people stopped and helped us get out of our unfortunate situation. It was a great way to see the community in action. 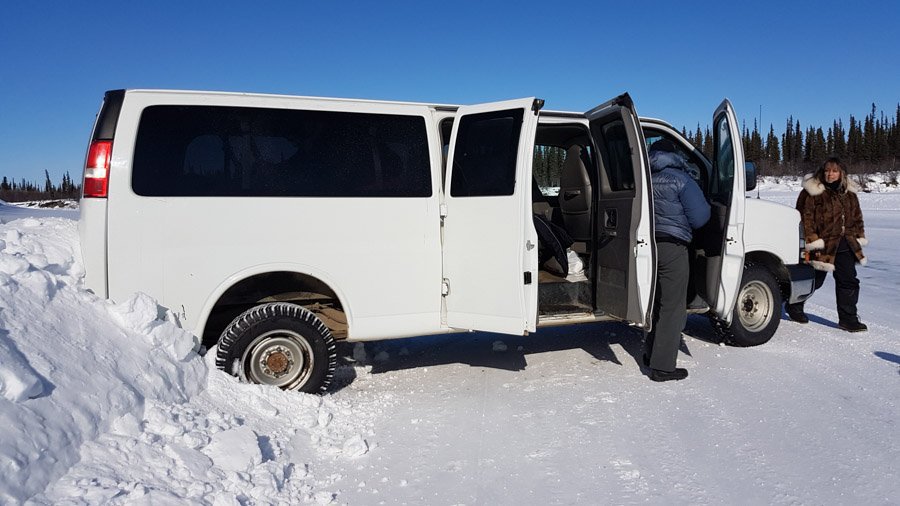 Landing in a soft snow bank…

All roads have a danger factor of course, but the ice roads arenât any more dangerous than regular roads. The ice roads are maintained and looked over just like any other roads. There is even a speed limit that is enforced. You donât need tire chains or a special type of car to drive the road, but you do need to be smart and prepared. Make sure that you or your guide have shovels, food, blankets, and communication with you at all times.

You can easily stop anywhere along the road to get out and experience the ice road up close. This was my favorite part.Â  When I first set foot outside the van I felt dizzy as I looked at the ice underneath my boots. It was all cracked and appeared like a deep blue marble; not something you really want to see when you are walking on ice! I could swear I even heard it creek and moan as I took steps on it. Through the winter, cracks in the ice are created by the expansion and contraction of the surface ice due to variations in temperature. Even though walking on the marbled ice seems dangerous, itâs not. Itâs actually safe, and the ice is still thick on the roads. Youâll also even see little round markings in the ice which are frozen bubbles that never made it to the surface before freezing.

Walking on the ice road, a beautiful design underfoot

What Makes Driving the Ice Road Such A Great Arctic Adventure?

I like adventures that are in short supply, and like most things, the ice roads wonât be here forever. In fact at the time of this writing, the Inuvik to Tuktoyaktuk route has been officially closed for good; I was able to drive on it in the last year of its existence.

In the summer of 2017 a new road was opened to connect Inuvik and Tuktoyaktuk via land in any time of year. This means the ice road will no longer be created or maintained in the winter. All of the effort must go toward maintaining this new road through the tundra and boreal forest year around. The creation of the new road is exciting since it now means you can drive the Dempster Highway all the way to the Arctic Ocean for the first time in Canada.

Itâs Canadaâs first road to the Arctic Ocean â but not Americaâs. Read how you can drive the Dalton Highway in Alaska!

Then thereâs also global warming. Thanks to our changing environment, the ice roads have been freezing later and melting earlier, drastically reducing the precious window of time that isolated residents can use the roads and tourists can enjoy them.

Russell Neudorf, the former deputy minister of transportation notes “The ice road season is getting shorter for us. That’s because we’re getting warmer weather throughout the year. Fifteen or twenty years ago, we noticed something changing and it continues to change. It continues to get warmer.”

However, all is not lost â you can still drive an ice road from Inuvik next year and beyond. The road to Aklavik will still remain in the winter. Even though this road doesnât take you out on the Arctic Ocean, youâll still get the fun adventure and cultural experience of driving an ice road. And starting in winter 2018, Tundra North Tours will be continuing to offer ice road trips to Aklavik as part of their winter adventure offerings.

Iâve driven a lot of crazy places in the world, but this was the first time I had ever driven on the Arctic Ocean. If you are looking for a truly unique adventure, then go north in the winter and drive an ice road. And while you are there, check out all of the other Arctic adventure tours you can do! And donât wait too long, the ice roads are an arctic tradition that may be slowly going by the wayside.

How you can drive the Coolest Roads in Canada

Take a winter tour via Tundra North Tours based out of Inuvik.
Tundra North Website
Of course you can also rent a car in Inuvik and drive yourself.

When I travel, I find the cheapest rental car rates at RentalCars.com. Check out their prices for a Canadian Arctic road trip!

I was a guest of Tundra North Tours for this trip, however all opinions expressed here are my own.

This post contains some affiliate links. If you choose to purchase items through these links, I will earn a small commission at no extra cost to you. These commissions help reduce the costs of running this site.