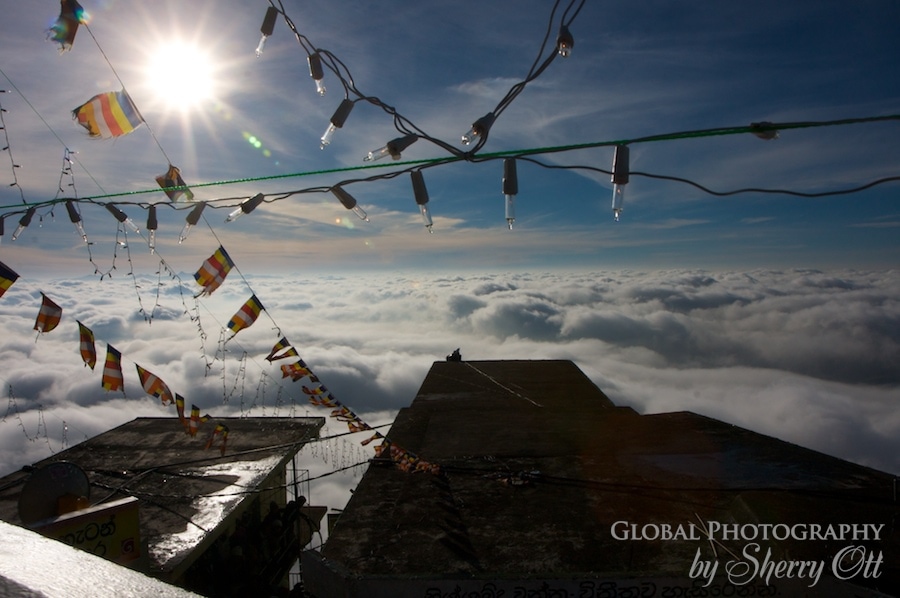 Above the clouds religions collide

Footprints seem to mark the beginning of life for humans. We are born, and soon our little foot is being dipped in ink and imprinted on our birth certificates â marking our âofficialâ beginning. In Sri Lanka the birth of the main religions also came to life with a footprint â a sacred footprint. However instead of being imprinted on paper, itâs imprinted on the top of a steep peak 7,295 feet above sea level. If you want to see this footprint, you have to give your own feet a workout.

At the top of Adamâs Peak (referred to as Sri Pada in Sri Lanka) is a huge ‘footprint’, claimed by Muslims to belong to Adam, who stood there in expiation of his sin in the Garden of Eden. However religion is never that simple. This same âfootprintâ is believed by Buddhists to be the mark of Buddha, Hindus hold the print to have been made by Lord Shiva, and Christians claim it is the footprint of St. Thomas. I donât know who is correct, but I do know that the footprint continues to draw pilgrims from all religions to the top of the peak from December to April for over one thousand years.

Russ and I decided to join that pilgrimage, less for religious reasons, and mainly for adventurous reasons. The climb to the top is a mere 5,000 stairs; and it is best done in the middle of the night so that you arrive at the top at sunrise privy to spectacular views. Truth be told, Russ was not nearly excited about this âultimate stairmasterâ as I was; in fact I was pretty sure he was never going to travel with me again after this hike! 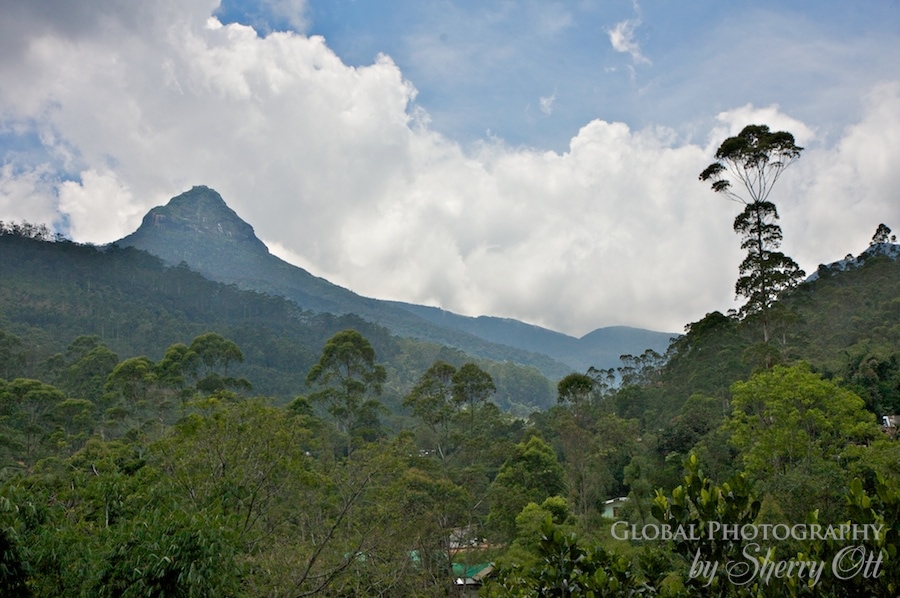 The view of Adam's Peak from our guest house balcony.

The route is completely lighted and there are steps (in various crumbling states) the whole way as well as tea shops and vendors. This wasnât my normal kind of hike, yet it had many challenges. We happened to be doing the climb on the most significant and busy time of the year â at Poya. Every full moon day is known as a Poya in Sri Lanka; this is when a practicing Buddhist visits the Temple for the rituals of worship. If you climb during Poya, then you ensure that you will be with the masses, it will be slow, there will be waiting, and long lines at the top. Lines and lots of people do not appeal to me at all, however when you travel you donât always have the luxury of waiting for the ârightâ moment, sometimes you have to seize the moment, suck it up and just do it. Which is exactly what we did. I chose to look at the whole crowded experience as a cultural journey; one in which I would learn a lot about Poya, Sri Lankans, and Adamâs Peak.

We started at 3:30AM and walked from our guest house to the beginning of the trail. It was chilly, but we werenât cold for long once we hit the steps. Vendors were open 24 hours selling mittens and hats for local families who were showing up by the bus load. All ages were included â elderly as well as kids and babies who had to be carried for the whole 5,000 steps. Talk about a labor of love. 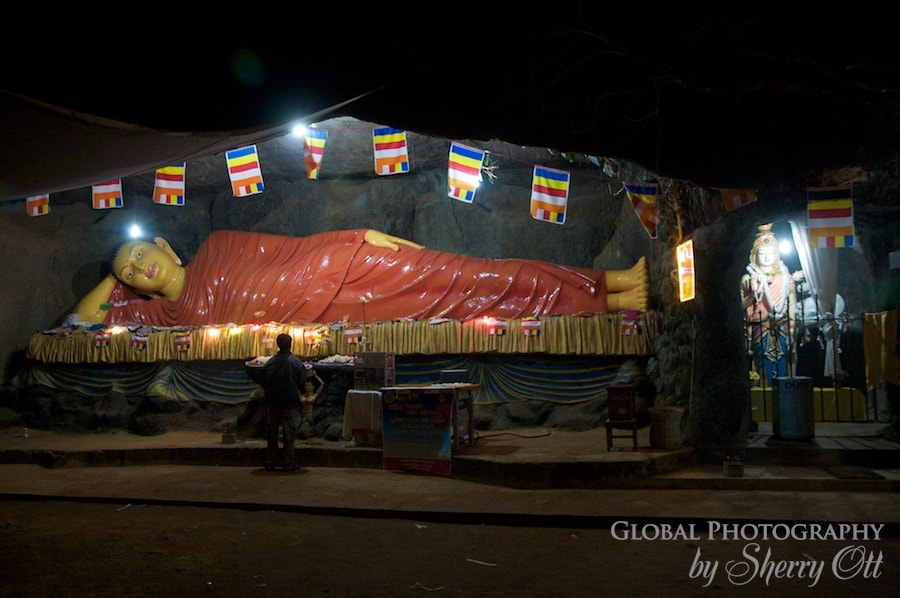 Even Buddha wants to sleep at this hour!

We joined right in and started our climb. There were temples along the way that provided a nice distraction and chance to catch our breath and stretch our burning quads. It was crowded, but not horribleâ¦.at least not yet. Part of the local ritual of the climb was for Sri Lankans to have a large traditional meal prior to the hike and then take a âbathâ in the holy waters of the river along the route, and then make the climb. Russ and I did have a nice big meal the night before, but we skipped the dip in the holy river; the lines were long!

There were relatively few foreigners on the trail, and we seemed to be a spectacle at times as the locals stared and smiled at us; big, sweaty Americans huffing and puffing in our tennis shoes while they ran past us in bare feet and flip flops. As we neared the top the sun started to rise and we realized that we had âstairmasteredâ ourselves above the clouds. It became very steep near the top and thatâs also when the real effect of Poya was realized. A complete traffic jam of people waiting to get to the temple at the top and receive their blessings. We waited for a while but the line didnât budge and we were still 500 feet away from the top. Russ and I decided to make a move; since we werenât waiting for the blessings in the temple, we moved to the other side and went up the âdownâ side and reached the peak by the exit. Quite frankly we were lucky there was no one there âofficialâ to stop us. 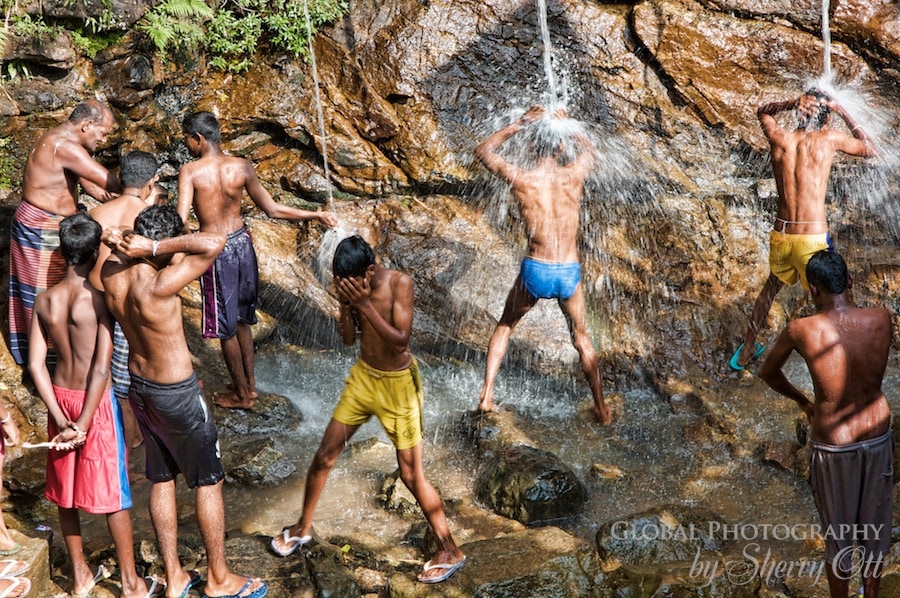 We didnât go in the temple for blessings, we simply went to the top and enjoyed the view and celebrated our massive knee crushing accomplishment. The sun had risen above the clouds and lit up the sky a golden orange. Local s were celebrating all around us and giving us platters of fruit and plenty of smiles.

We stayed at the top snapping photos and beaming in our accomplishment. After 20 minutes, we turned and looked at each other, gave a big sigh, tightened up our laces, said a little prayer for our knees and started the real challengeâ¦going down.

To learn more the history and legend of Sri Pada

When: The pilgrimage season runs from December to May. The long weekend holidays have seen an influx of visitors, and if youâre planning to make the climb during the Poya, take into consideration that you may have to wait hours in the queue to the summit.
Where: The climb begins at the town of town of Dalhousie. Buses run to Dalhousie from Kandy, Nuwara Eliya, and Colombo in the pilgrimage season. Train is also available to Hatton and then bus/tui tuk is required from there.
Cost: There is no cost to climb.
Accommodations: There are lots of guest houses to choose from at the base in Dalhousie. We stayed at Wathsala Inn â not a great place, but it was only one night. 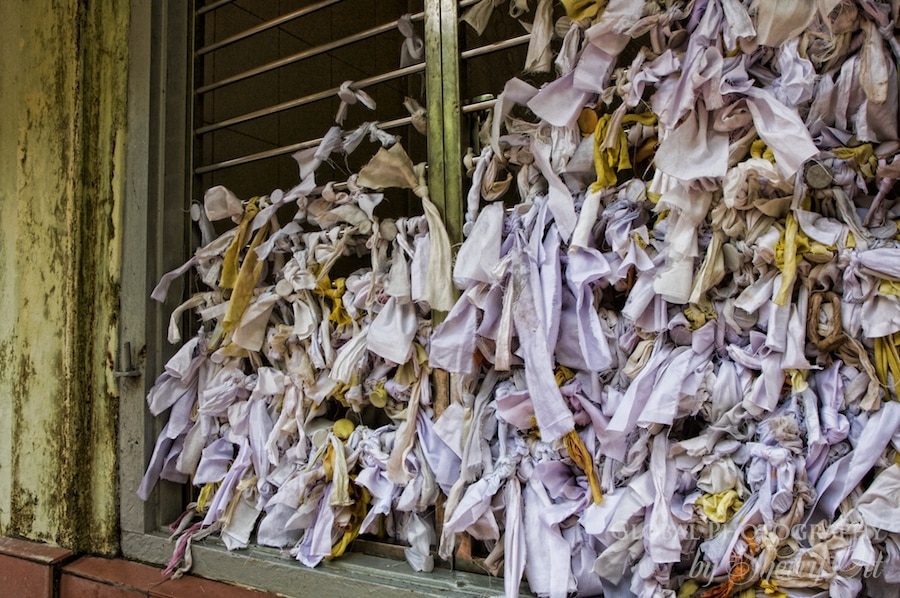 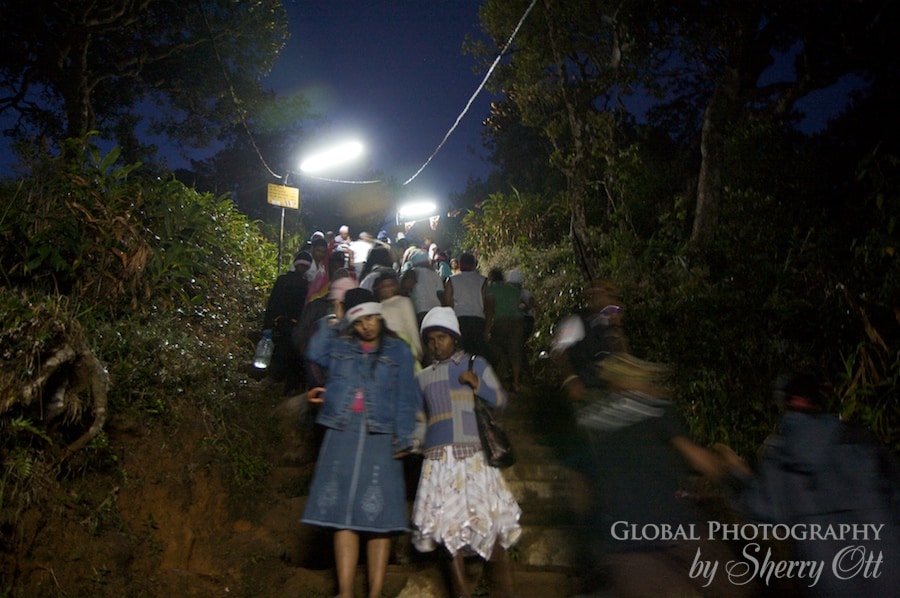 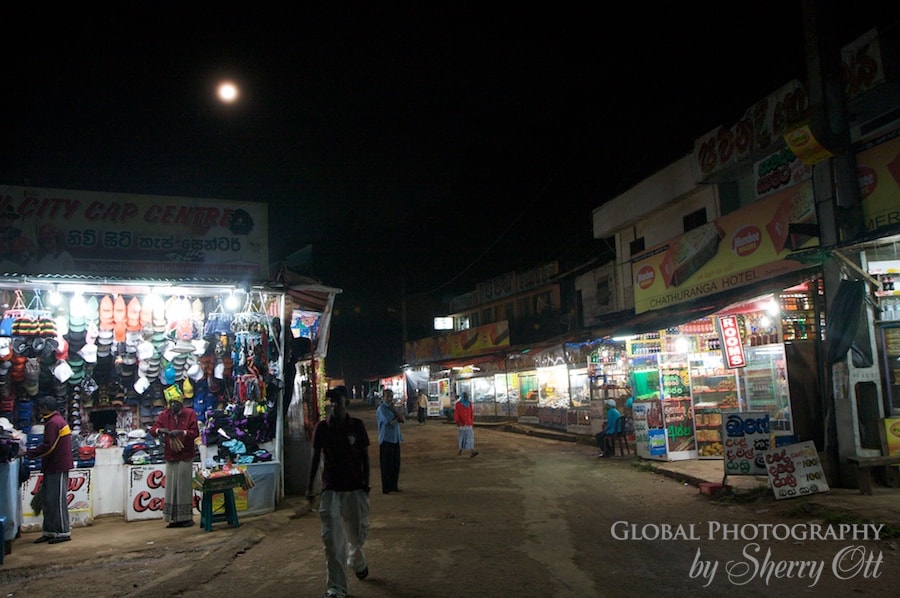 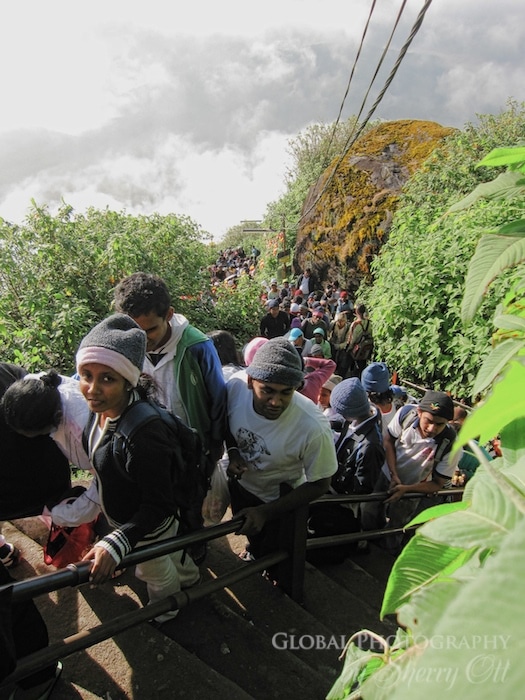 A never ending line of Pilgrims