Smoke billowed throughout the tent and left the area a-glow in orange. The flames lapped up from beneath the metal spherical disk. She pounded the dough into a flat pizza like form and simultaneously stoked the fire with more wood with her free hand. The spherical metal âgriddleâ was just the right temperatureâ¦thwak! The flattened dough landed on the griddle and immediately went from dough to solid form, bubbling from the intense heat. Kids covered in dust stared at me until I gave them a glance and then they turned and ran the other way or tried to hide behind anything to escape my eyes. It felt as if I was in an undiscovered land or had moved backwards through time; and in a way â I was. 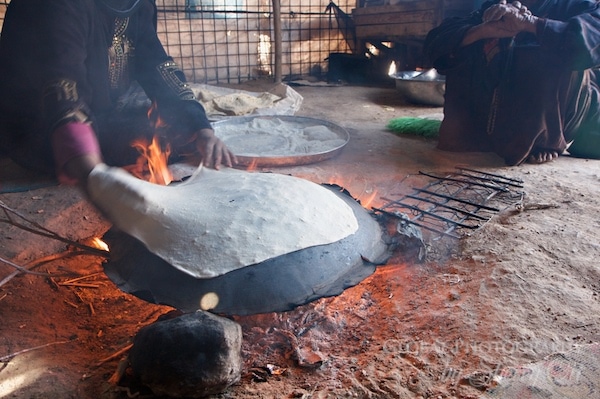 The process of making shrak

I was lucky enough to get invited into the Bedouin womanâs tent to watch this process. The woman whoâs face I could not photograph was making shrak, a Jordanian bread which is used at every meal at Feynan to scoop up food and make sandwiches. The sandwiches werenât for locals, it was for tourists who were staying at the Ecolodge nearby. The Feynan Ecolodge integrated into its Bedouin environment so as to practically go unnoticed; however a few lucky tourists have discovered its charm.

I was actually visiting the unique lodge in order to write about a new volunteering experience offered through GeoVisions, but I found that the experience was much more than staying at the lodge; it was about interaction with the whole community.

The lodge is situated on the Dana Biosphere Reserve, the largest reserve in Jordan as well as within a Bedouin community. This means that itâs a stellar place to hike, go mountain biking, do some canyoning, and get a cultural experience; an outdoor travel playground!

The lodge employs about 27 local Bedouin as staff; from cooking, to front desk, to candle making. Why candle making? Because one of the most unique things about the lodge is that there is no electricityâ¦itâs completely unplugged. The massive solar panels provide all of the power the lodge needs, however at night since there are no light fixtures, the whole lodge is lit with over 250 candles placed around the common areas and in the rooms. This was a unique accommodation thanks to the candles; it created a peace and serenity like no other place Iâve ever stayed. 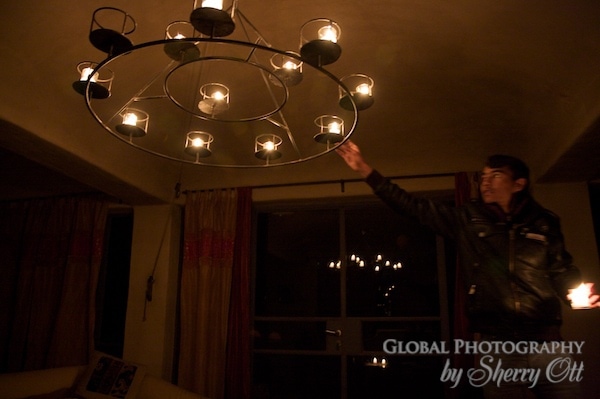 Thanks to no electricity, I untethered myself from my laptop and started my adventure with a guided hike with one of the Bedouin guides from the lodge. We hiked to the Neolithic ruins and some of the oldest copper mines in the world where Christian slaves were later worked to death by the Romans. A Roman aqueduct and mill, and remnants of Byzantine churches remain. I had specifically asked my guide to take me to some of the Bedouin families so that I could also learn more about their mysterious culture.

We walked up to the first tent and found some children (teenagers) around who immediately kindly asked us to sit with them for tea. Tea in Jordan is like a television set to Americans â the culture revolves around it. My guide explained that the Bedouin used a black tent for the winter months and a lighter color tent for the hot summers. The kids showed us the clan of rabbits living in their tent and we discussed the âstandardâ questions in English â name, age, and where from. 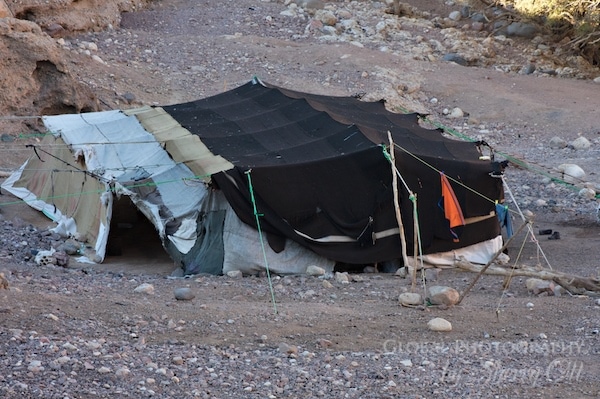 The Black tent for winter

We moved on to another tent with our new teenagers in tow as if I was the Pied Piper and my western features were the flute enchanting followers to my path. At the next tent we sat for tea and some adults joined us to come look at the westerner and ask the standard questions. My guide introduced an older man and a teenage girl explaining that the man was the teenagerâs grandfather. As we went through this conversation more and more people started to gather around. Young boys about 4 years old hung around the old man staying a safe distance from meâ¦the stranger.

I asked my guide if the boys were more grandchildren and he said no, they were sons. What? I must have misunderstood. âGrandchildren?â I asked again.
âNo, sons.â He said again. I looked at the 15 year old granddaughter and back at the 4 year old sons and realized that this was my introduction into the common cultural situation in this part of the world â multiple wives. I thought to myselfâ¦what a lucky old man! 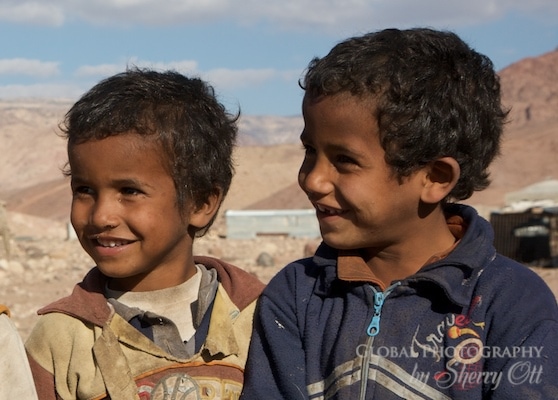 The young girlâs name was Mahal Aoodat, and she had a paper in her hand that she studied for a while and then looked up at me and asked. âWhat do you do in your three time?â I was stunned, but clearly she had notes she had made at school and was ready to practice them. I channeled my ESL teacher translation powers and realized âthreeâ meant âfreeâ. I gave her a big smile and answered her, âI like to take pictures.â while motioning to my camera. This was the beginning of a beautiful Bedouin friendship.

I spent the next 2 hours sitting on a mat outside the tent with Mahal Aoodat by my side looking through her English language workbooks, explaining things, helping with pronunciation, and answering more questions. The school was administering an English exam the next day, so I must have been seen as an angle sent from English Heaven! I learned she was the only girl in a family with 7 brothersâ¦not to mention a number of uncles who were10 years younger than her! After a short while, I had a whole tribe of kids around me who just wanted to hear me read in English. They brought tea after tea to me, and eventually I was even able to take a few pictures.

At sunset, Mahal Aoodat accompanied me to meet with the other hikers who had come to watch sunset over the dry riverbed. We walked together and I promised her I would stop by the school the next day (not really knowing if this was allowed â but hoping I could play ignorant tourist and break the rules if I had to!). We watched the sunset and I introduced her to more tourists from around the world. She then went back to her family and I returned to the lodge after a very long day and an extremely full bladder of tea!

I spent the night visiting with other travelers by the fireside and then went up the roof deck to star gaze before I blew out the candles in my room and went to bed for some of the quietest and most peaceful sleep Iâve had in months.

The next morning I was up early, grabbed some warm shrak and cheese for breakfast and quickly went walking to the school with my camera. The kids were all playing in the school yard but quickly stopped when I walked in. I made eye contact with Mahal Aoodat and gave her a smile. Soon I was surrounded by curious but shy kids simply wanting to stare at me. A few brave ones would try to ask me questions. Eventually the teachers showed up and they went through morning calisthenics with the kids who were all lined up in the school yard according to grades. Actually, the boys were the only ones doing the calisthenics and the girls simply stood in the back of the lines and stared at me and giggled. 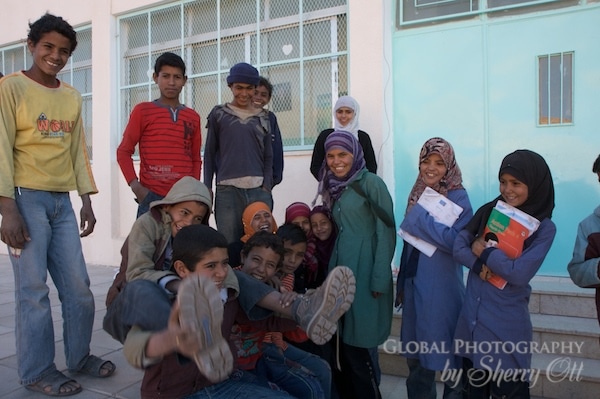 School kids…the same all over the world!

The teacher invited me inside and showed me the school. There were 3 rooms which housed all grades â from aprox. 6 yrs old to 16 yrs old. The teacher started to hand out the English exams and asked me to read the questions to the kids in English â then he proceeded to translate them all into Arabicâ¦which sort of defeated the point of the testâ¦but oh well. After talking to the teacher and watching the kids try to take the exam, I thought I better leave as I was a bit too much of a distraction to the kids. I told everyone goodbye and slowly walked back to Feynan lodge. 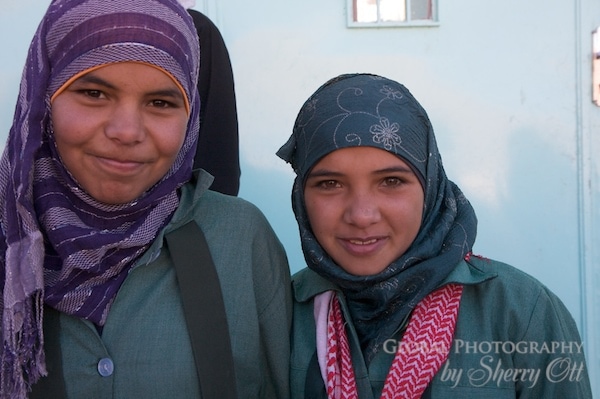 I was sad I had to leave that morning as I imagined what it would be like to stay in this community a month and the relationships you could build â not to mention the amazing photos you could take once you were a part of the community rather than simply a visitor. Wadi Feynan is definitely a unique experience some travelers get to experience. And if you find yourself in Jordan â I suggest you go and have tea in Feynan with Mahal Aoodat and see how sheâs doing on her English!

These are the cultural experiences I love. This is why I travel.

Learn more about volunteering at the EcoLodge

View all photos from Feynan