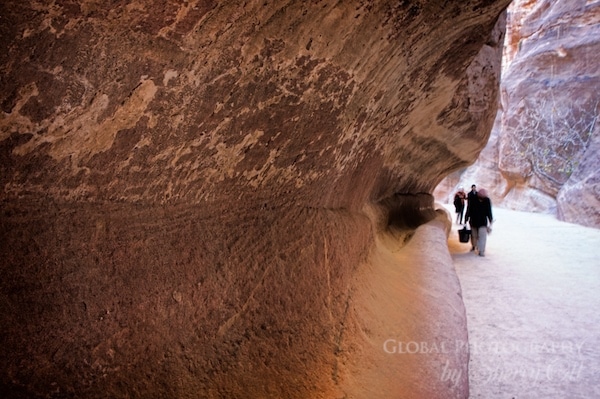 Petra was the main topic in John William Burgon’s Poem Petra. Referring to it as the inaccessible city which he had heard described but had never seen. The Poem was awarded the Newdigate Prize in 1845 :

â It seems no work of Man’s creative hand,
by labour wrought as wavering fancy planned;
But from the rock as if by magic grown,
eternal, silent, beautiful, alone!
Not virgin-white like that old Doric shrine,
where erst Athena held her rites divine;
Not saintly-grey, like many a minster fane,
that crowns the hill and consecrates the plain;
But rose-red as if the blush of dawn,
that first beheld them were not yet withdrawn;
The hues of youth upon a brow of woe,
which Man deemed old two thousand years ago,
match me such marvel save in Eastern clime,
a rose-red city half as old as time. â

I went into Petra blind, no real research, no real idea of what to expect; I prefer to keep things a mystery so I feel like Iâm discovering them myself. However, I will provide you a little background in order to kick off my week of blogging about Petra.

The city of Petra achieved its greatest importance under the Nabateans, an ancient people whose original homeland was in northeastern Arabia. They migrated westward in the 6th century BC and eventually settled at Petra. The Nabateans were master merchants. They achieved this title due to their monopoly on the caravan spice trade that involved China, Egypt, Greece, and India and passed from the Arabian interior to the coast. By the 1st century BC the Nabataean kingdom extended from Damascus in the north to the Red Sea in the south, and Petra was home to as many as 30,000 people. It was during this period that the most impressive structures of Petra were built, including the Treasury, the Great Temple and the Qasr el-Bint el-Faroun. If you are an ancient history buff and want to know more, then I suggest checking out Wikipedia.

Thanks to Indiana Jones, Petra became known in the modern world to masses. It is a Unesco World Heritage site and was recently named one of the âNewâ 7 Wonders of the World

The long downward entrance to Petra through the Siq is memorable – especially when there aren’t any tourists around. I forced myself to get up early in order to experience the entrance without the onslaught of tourists groups. The Siq is a mile-long narrow gorge leading into the city of Petra, emerging dramatically in front of the Treasury along the way. Hereâs your first view of the ancient entranceâ¦completely solitary…you can imagine what it was like to be there thousands of years ago. However, nothing will bolt you back into the present day like a 4X4!

13 Responses to "Entering Another World: Petra"