Surprising Things To Do in Nuuk Greenland

Surprising Things To Do in Nuuk Greenland

I eagerly looked out the window as we landed on the worldâs largest island, but all I could see was white. Snow was everywhere. I looked again at my watch where the date read April 12th. Seemed a little late for all of this snow cover. But in Nuuk Greenland, they have snow on the ground 8 months of the year; this white landscape in April was normal. 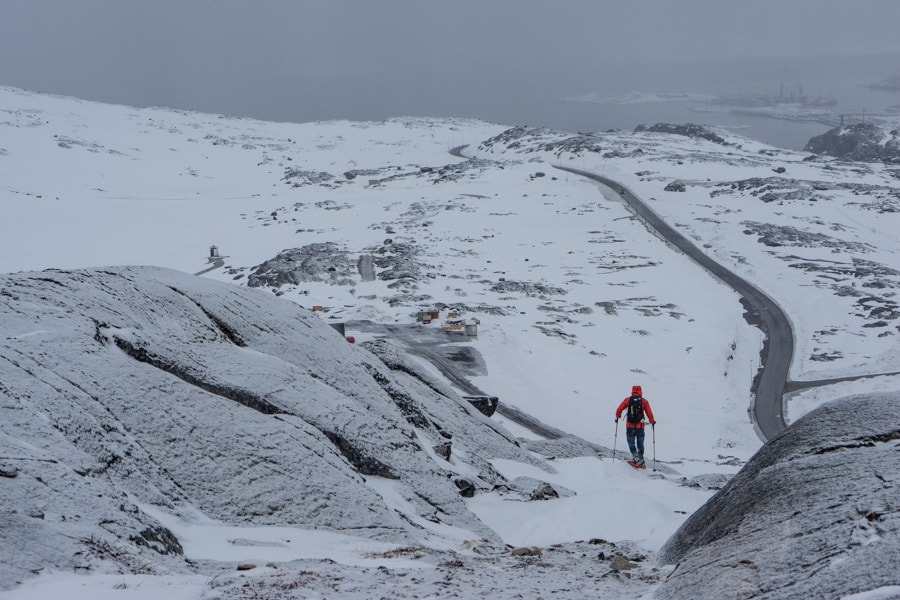 Anya picked us up from the little airport and drove us into the capital city of Nuuk. It looked like a black and white painting; the ground was white and the sky gray. As we came over the hill and down into Nuuk, I suddenly saw it; little bits of color throughout the landscape. As we drove deeper into town I noticed the red, yellow, and blue houses and apartment buildings. Street art installations on the buildings full of color stood out to me like a spotlight. The colors against the stark black and white background made a smile form across my face.

When you are in such an extreme area, any color, art, or creativity stands out even more. Similar to Eastern Siberia, Mongolia, and Alaska, I always find it so surprising that in the most desolate of places you can find the most color. This was my first impression of Nuuk Greenland.

But the colors werenât simply in the landscape, they were also in the history.

The origin of the name Greenland Starts with Erik the Red

Erik the Red (named for his red hair and beard) had a bit of a temper. After being exiled from Norway and later Iceland, he finally settled in Greenland. In order to start a settlement he had to have people come with him to live there, but itâs not easy to get people to come to a cold barren land. So it is believed that he might have embellished it a littleâ¦calling it a green land to entice people to join him. Regardless, it worked and soon Greenland was occupied by a few hearty souls.

Is there Any Population in Greenland?

Yes, those early settlers stayed and formed a life there, in the harshest of conditions. Today, a third of the population lives in Nuuk, the capital and largest city in Greenland. Not only does Nuuk have 17,500 people, it has a ton of baby carriages. One of the next things that stood out to me even before the lack of trees or cold temps was the groups of baby carriages everywhere! In fact â there are baby carriage âparkingâ areas in buildings and establishments. I guess I know what Greenlanders do in the cold, dark winters! 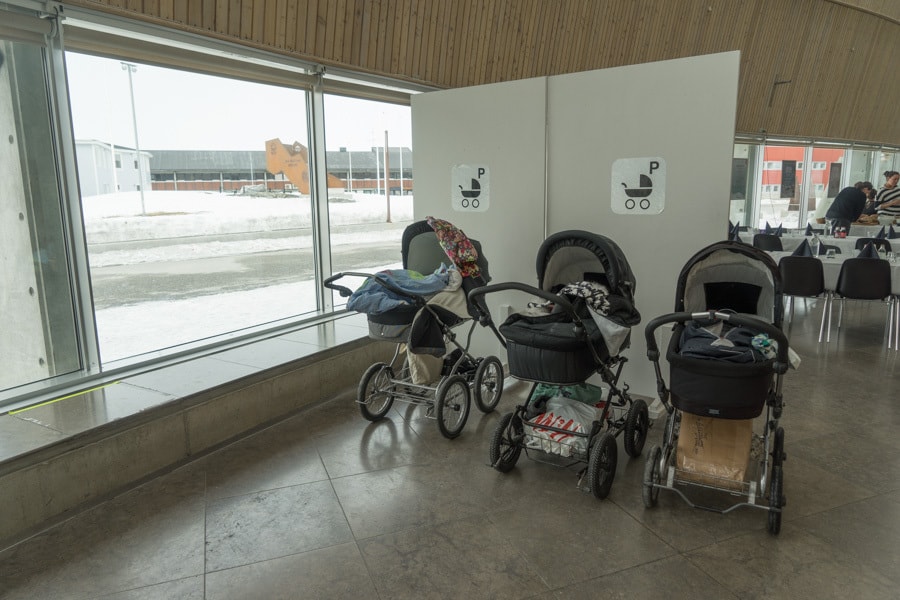 Since there are no roads that go from town to town, the easiest way to see Greenland is by boat! Yes, there are roads in Nuuk, but nothing connects Nuuk to other towns in Greenland except waterways or flights.

Because it is a bit transportation challenged, my best advice for experiencing Greenland is to fly into a larger city, like Nuuk, and then explore that area as much as you can. I spent nearly 3 days in and around Nuuk and was able to get a good feel for it while experiencing a diverse amount of things to do in Nuuk ranging from art, to cultural sight seeing, to adventure.

Things to do in Nuuk (and around)

The small yellow and black boat pulled up to the dock; I loved itâs nod to NYC taxis. We were about as far from a NYC Taxi as we could get, and it made me chuckle. I walked out on the wobbly dock and said hi to our Captain for the day and boarded the motor boat. Luckily it had a small area inside to sit and be protected from the cold as we sped off deep into the Nuuk Kangerlua Fjord (a 99.4 mile long fjord system near Nuuk). 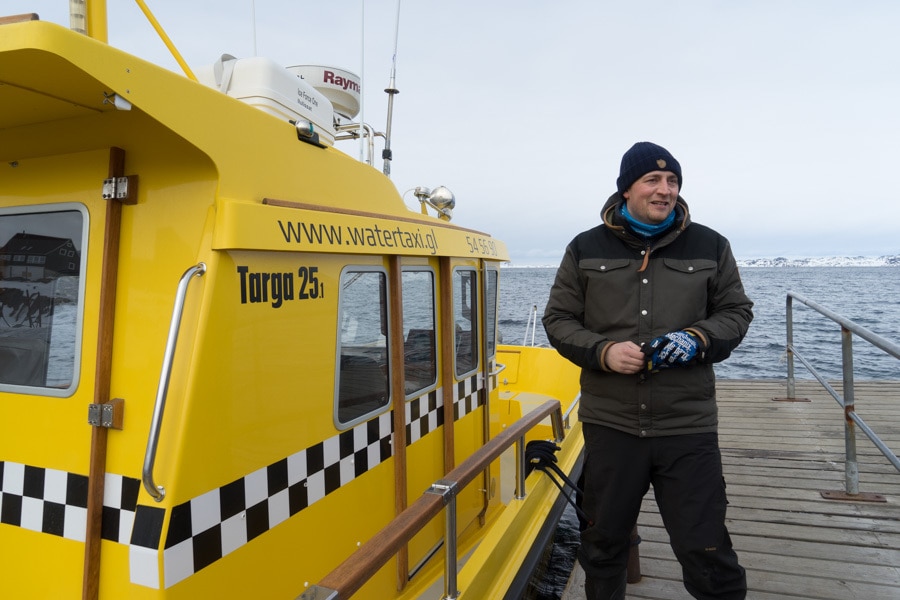 As we rode out of Nuuk, we went through snow and fog eventually opening up to bright blue skies with great visibility of the surrounding mountains. It was as if someone pulled open a curtain suddenly and astonishing, snow-covered mountains and landscape revealed itself. It reminded me a bit of the Antarctic Peninsula. 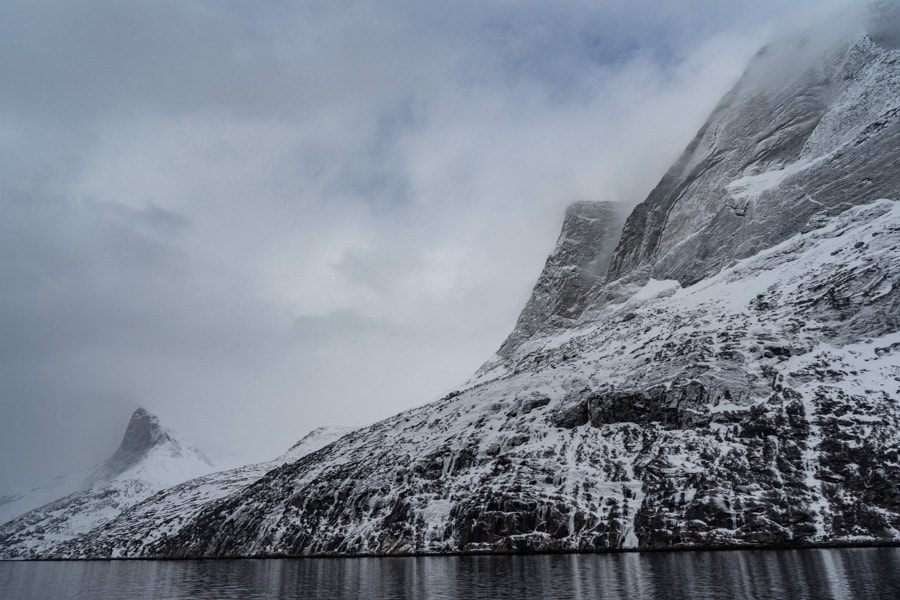 After an hour of incredible scenery, we arrived to a settlement called Kapisillit. The tiny village is home to about 75 people living in colorful houses in one of the most picturesque places in Greenland! With no markets or stores, the inhabitants mostly subsist on hunting and fishing.

We spent an hour walking around the settlement taking photos, talking to locals and seeing how they lived. Under the bright blue skies that day their life looked pretty stunning, however I can only imagine what that remote life was like in the heart of the dark winter 40 some miles from Nuuk by boat.

Travel through the Fjords

Take the Nuuk Water TaxiÂ  for a day of sight seeing, northern lights, or fishing!

Snowshoe Up to Incredible Nuuk Views

I couldn’t resist getting in some adventure while I was in Greenland. I went out with Nuuk Adventure mountain guide/owner Marc Carreras on a blustery day just outside of Nuuk for some snow shoeing. He had some incredible snow shoeing gear and made sure we were all prepared for the elements. I even learned some new hiking tricks around how to hold hiking poles, and posture! He was a great guide leading us up 1000 feet of Lille Malene mountain for some lovely (yet snowy) views!

Want to know more about Snowshoeing â check out my
Snowshoeing 101 Guide: Why do it, What to wear, Where to go

Marc also does summits and climbing trips if you want a bit more adrenaline. He provides all of the gear you need to stay safe and warm which was a bonus since winter adventure gear can be a pain to pack and travel with!

Contact Marc at Nuuk Adventure to customize an outdoor trip around Nuuk!

Soak up the Art in Nuuk

Viewing incredible art was the last thing I was expecting to do in Nuuk. But it is a community that values art. We stopped in at the Nuuk Art Museum, a small, bright green house up a hill.

The permanent collection is primarily of works collected by Svend and Helene Junge Pedersen, and it includes an extensive collection of historic art. I normally am not a fan of this kind of art, but it really won me over as it told the story of life here in this harsh environment. A large part of the collection is paintings by Emanual Petersen, a scenic painter who specialized in Greenland landscapes.

In a glass case, I saw the tupilaks staring at me; they were jarring. The figurines mesmerized me and equally sent shivers down my spine. These bone figures from Greenland depict a spiritual creature created by humans. They were disturbing looking â half man, half animal â used to cast spells on your enemies; much like a voodoo doll. The museum has an incredible collection of them on display that shouldnât be missed.

The museum is also a part of the Nuuk ArtWalk. You can do a great art walk around the city taking in all of the sculptures and big art installations on two crumbling apartment blocks. You can download and listen to stories about artwork in the city as you follow the map below. The ArtWalk is 27 minutes long, and starts at Blok 10, close to Nuuk Art Museum. 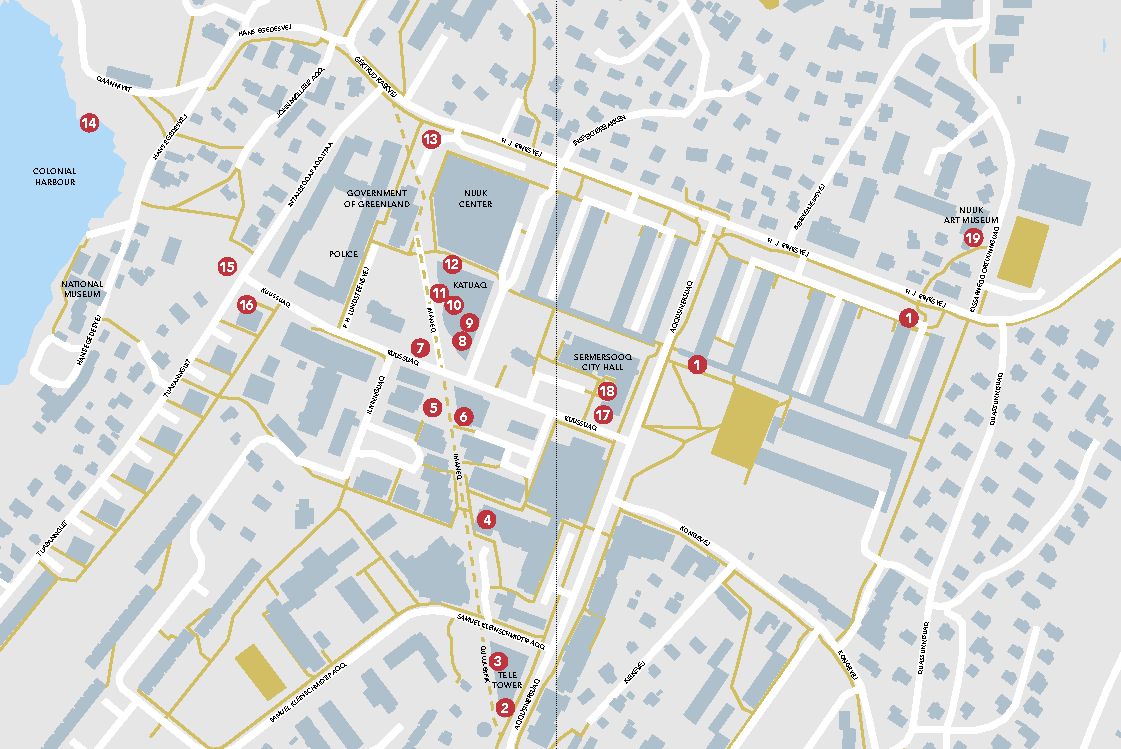 The one work that caught my eye and captured my heart was the street art on building Block 10; a local woman petting a polar bear. It was a powerful image on the deteriorating cement building. This isnât the only large-scale work in Nuuk by the Icelandic-Greenlandic-Australian creative project. Two artists from Iceland and Australia convinced the Greenland government to help fund this creative project that brings an exciting vibe to the city.

The other large installation is of a hunter thought to be called Katuat or PooÅojorteq from Tasiilaq in East Greenland. Both of these big works of art are haunting and beautiful at the same time. 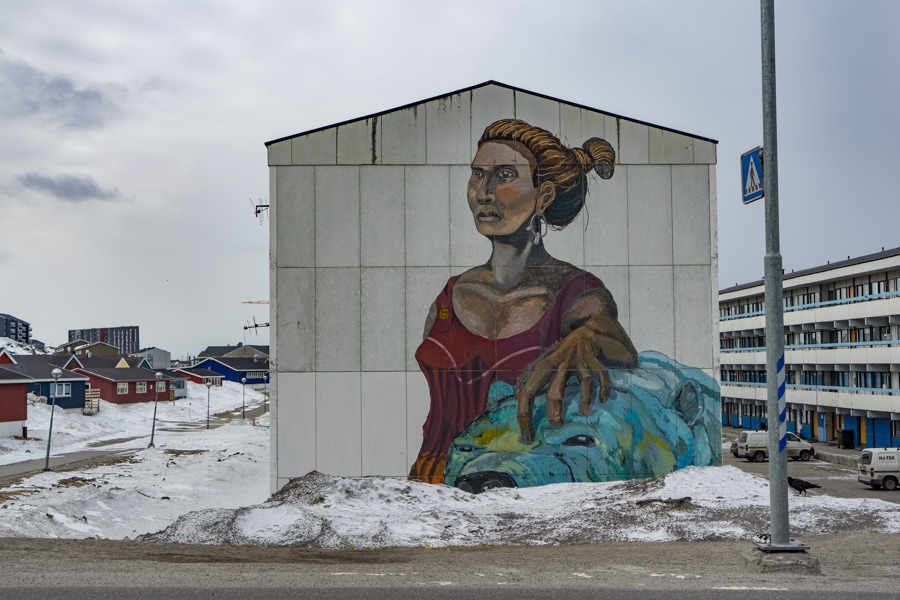 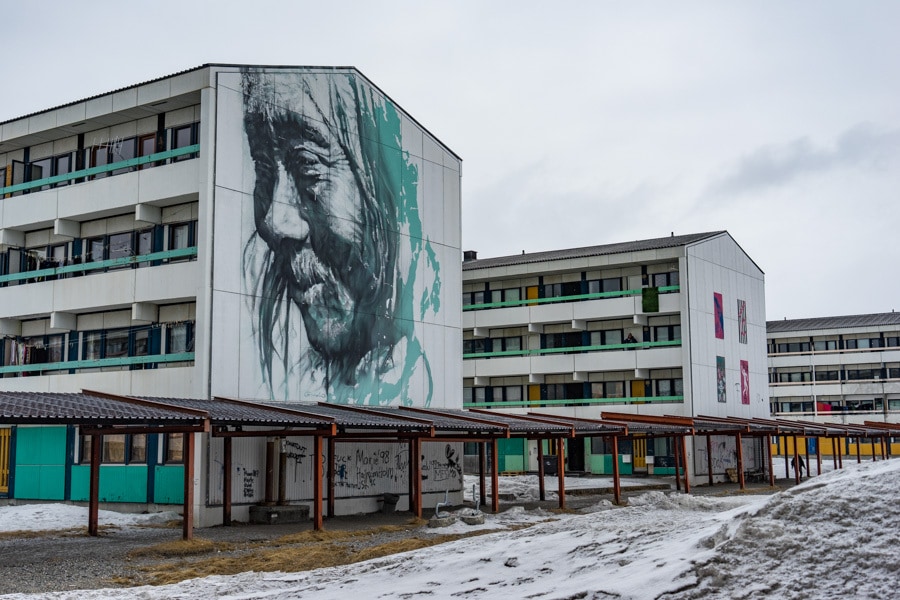 Savor the Local Foods of Greenland

One would think that gastronomy would be lacking in such a remote place where no vegetables grow. However, itâs not lacking at Restaurant Sarfalik that offers Nordic-inspired dining with the best views in town. Perched on the fifth floor of the cityâs premier hotel, Hans Egede, this upscale restaurant takes the local Greenlandic food and elevates it into beautiful little works of art that will leave you wondering if youâve been transported to Paris. Iâm talking foams, flaming sauces, reindeer, lamb, and incredibly diverse flavors that any normal person would consider putting together!

For something a bit simpler, try a muskox dog at the cool community center – Katuaq Cultural Center Home of concerts, theater performances, art exhibitions and dining at Cafe Tuaq. This is the place to be to just check out the local scene. Youâll find kids, adults, tourists, and business travelers all intermingling in this unique space. 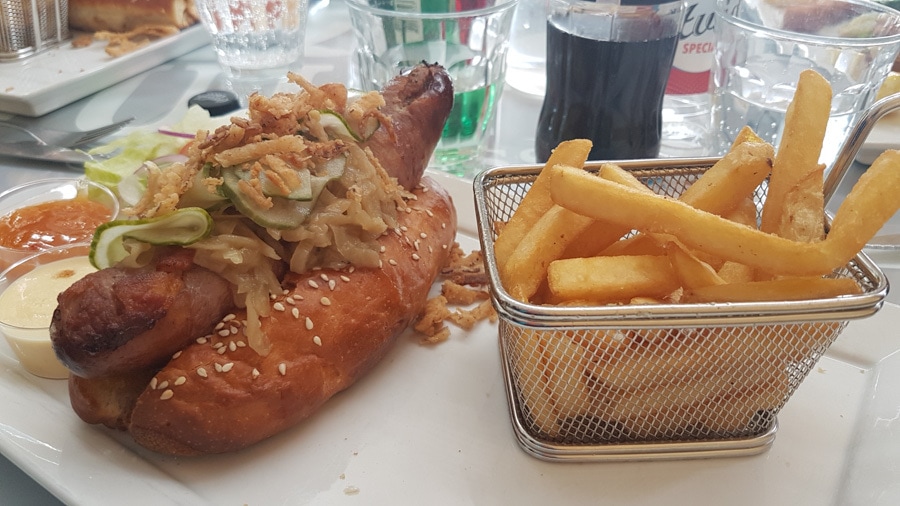 When we learned that the hot new pop up restaurant in Nuuk was about to end itâs run, I was excited to try to get tickets to one of itâs last dinners. I had been hearing all about the young chef Inunnguaq Hegelund and his Greenlandic food from the locals we met. They raved about the local delicacies the chef served such as like muskox, narwhale blubber, seal, and dried fish.

The food was all so unusual and I tried all of it. I even took the advice of one local who told me to be like a Greenlander I needed to put the piece of reindeer blubber into my coffee instead of cream. When you finish the coffee, I was told to then eat the chunk of coffee soaked blubber. I doubt chunks of reindeer fat will be found in Starbucks anytime soon, but you can always find it in Nuuk if you are feeling adventurous!

I’ve always thought of Greenland as an extreme adventure type of destination full of icebergs and polar bears; however, I learned it’s much more than that in Nuuk. Even though Nuuk and Greenland are some of the most remote places on earth to live, itâs full of old arctic traditions and a surprising amount of new creativity youâd find in any modern city. Itâs this juxtaposition of old and new that won me over in Nuuk. Itâs a fascinating culture in which I only scratched the surface during my short stay. Itâs just another reason to go back and see more of this surprising black and white land with tons of colorful layers underneath.

How to get to Nuuk Greenland

I was a guest of Visit Greenland for this trip, however all opinions expressed here are my own.

3 Responses to "Surprising Things To Do in Nuuk Greenland"