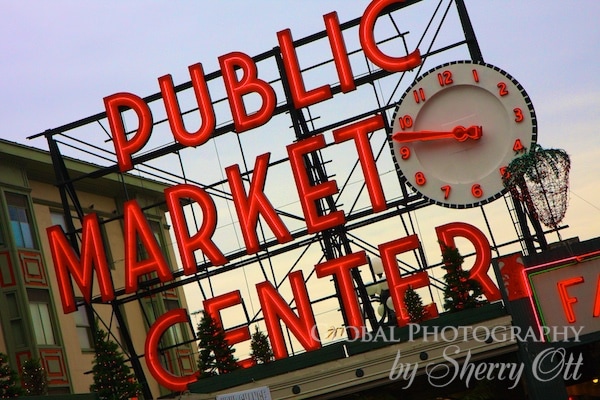 A Historical Sign welcomes you to the Pike Place Market

We met at the Starbucks, a bit clichÃ© for Seattle, but it was warm inside and I wasnât going to complain when I was handed a white chocolate mocha drink as I was peeling off my mittens. Mark introduced himself as our Savor Seattle guide for the morning and then introduced rest of the international group. The participants were from the UK , Korea, Texas, Boston, and Australia. I had to actually remind myself that I was in Seattle.

Mark was energetic and had a great personality for such a tour; the theatrically inclined always make good tour guides. He even grew up working in the Pikeâs Place Market as clam mascot and started by telling us stories of how he got the prestigious clam suit job.

The Market started in 1907 and it opened with the goal of having people go directly to the farmers to buy their produce. The marketâs motto was âMeet The Producersâ which basically was all about cutting out the middle man and buying direct from the farmers. A good idea – unless of course you were the middle men; they were a bit unhappy about the opening of the market. 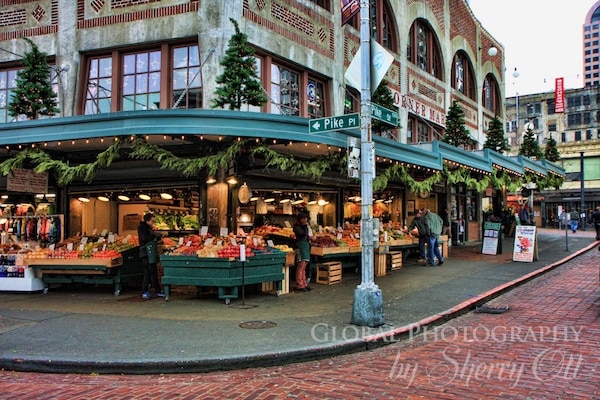 Fruit and vegetables spill out into the brick strees

Today the market is made up of primarily crafts people (who must make their own products), street performers (Buskers), and farmers (including fish mongers). They are all stacked on top of each other as the market sprawls across streets as well as vertical levels. There are 200 year-round commercial businesses,190 craftspeople and approximately 100 farmers rent table space by the day. In addition there are 240 Buskers; and more than 300 apartment units, most of which provide housing for low-income elderly people.

The first thing we learned was the rules; there are lots of rules for this market! There are rules about who can rent tables, the location and sizes of the tables, seniority lists, how many days a week you must be present, and even vacation/sabbatical rules! See Market Policies

As you walk around donât be surprised if you see a fish fly by you! This is probably the most famous thing at the market, the fish appear to have wings, but itâs simply the talent of the fishmongers at Pike Place Fish. When someone orders a fish the monger on the floor yells something and before you know it there is a fish being thrown back to the counter over the heads of shoppers. The counter fish monger prepares and wraps it. Legend has it that they started throwing the fish because it was faster and easier to throw them rather then walk them behind the counter; you canât really argue with that logic. Regardless the Pike Place Fish Market is the most active part of the market – at times the mongers sound like a team of cheerleaders minus the skimpy outfits. 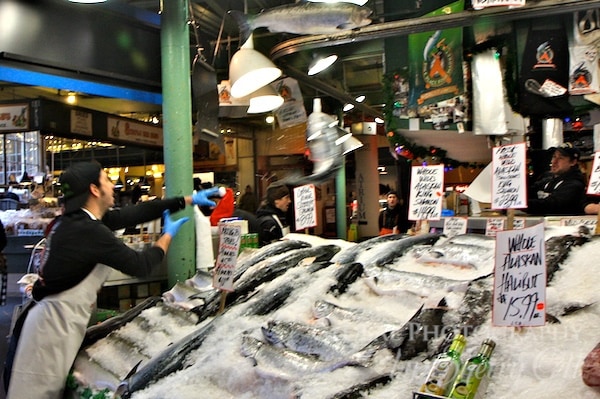 The market even has a mascot named Rachel, a bronze piggy bank weighing in at 550 pounds She sits under the main sign that says âPublic Market Centerâ. Sheâs said to protect the market as well as be a good fund raiser for the market. Over $8000 a year is placed in the bank including a myriad of foreign currencies. 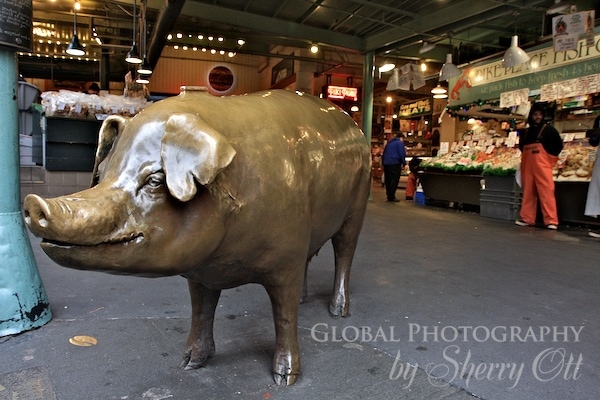 Oh yes, in addition to all of the rules, the entertainment, flying fish, and a mascot â thereâs food! Mark led us through a variety of shops; some old and some new and we tasted our way through the market for a couple of hours!

Places visited:
Beecherâs Handmade Cheese â cheese made there right in front of you â and then served up in a scrumptious mac and cheese!
Ettaâs Seafood Restaurant â delicious crab cakes and a famous chef
Pikeâs Place Chowder â New England clam chowder on the west coast
MarketSpice â Spice sold in bulkâ¦.ahhh â the aroma alone will draw you in to the store! They also sold a number of teas and salts.
Chukar Cherries â This cherry grower got inventive. They sell all varieties of cherries including salsa, trail mix, and a variety of chocolate covered cherries which are nothing like the syrupy box kind that my Grandmother used to love.
Daily Dozen Donuts â Tiny, hot, sugary and delicious. Made fresh in front of you and then a dozen of them are dipped in sugar and thrown into a brown bag, making it easy to walk around the market and eat donuts at the same time.
Pikeâs Place Fish – Itâs not only about flying fish and Dungeness crabs; they also sell scrumptious smoked salmon which was my favorite thing we tasted in the whole market.
Piroshky-Piroshky â yummy Russian piroshky both savory and sweet. 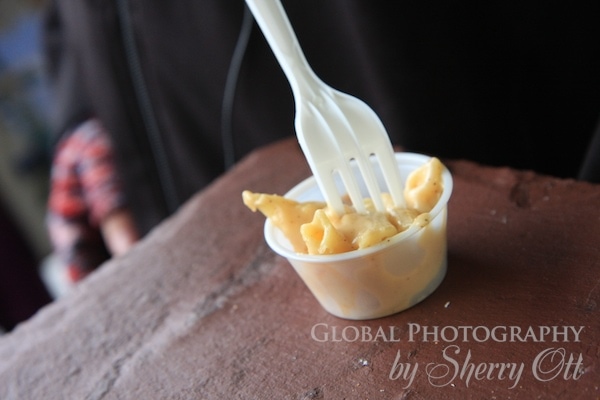 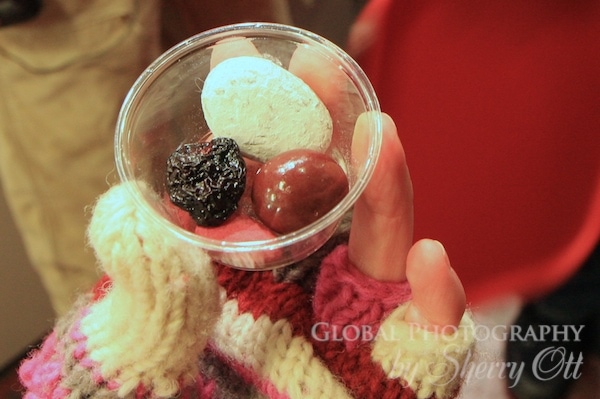 A variety of cherries to taste 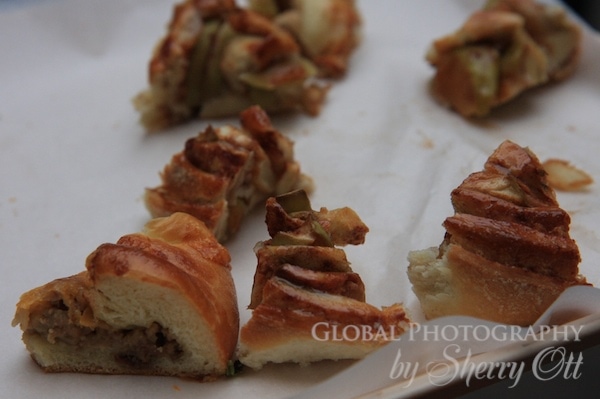 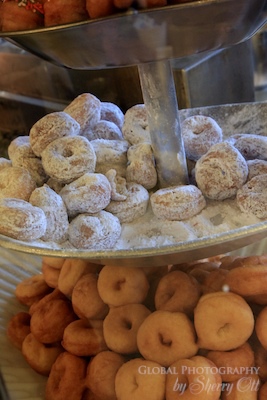 Itâs not surprise that I was full at the end of the tour!

-The tour wasnât simply about food, it covered the history, and culture of the market; making it a well-rounded 3 hours.
-Each person received a map with the names of all of the restaurants and shops on it so that you could go back.
-You were given a discount card worth 10% off most locations. This is just another reason to do this tour when you arrive in Seattle, before you do any other shopping or eating!
-Ear piece head sets. The market is a loud and busy place, but each of us had a little ear piece so that Mark could simply talk at a normal level and we heard it amplified in our ear. It was really effective for this type of tour â plus it made you feel less like a tourists outwardly because there wasnât a tour guide yelling at a group of people. Instead I could walk around a shop and look at things and take photos while I listed to Mark talk about the history.

The Could Be Better:

-It only could have been better if they had given me a pound of that smoked salmon to take home! Truthfully, I have nothing that they can improve upon â it was well run.

Would I recommend it?

The triple dip of history, food, and culture is a great recipe for success. The tour is also a great way to get tips from locals on what to do and where to eat. I was salivating by some of the descriptions Mark provided of the restaurants and little wine bars, yet it all was just dreams as I had to catch a plane the next day. The first thing you need to do when visiting Seattle is take the Pike Place Market Tour. Fight the urge to plan anything else, but this tour. As you participate on the tour, you will learn about a bunch of great restaurants and bars that you should visit in your spare time. I think the tour was economically priced considering the amount of food you also tasted and the quality of the guide and organization of it. 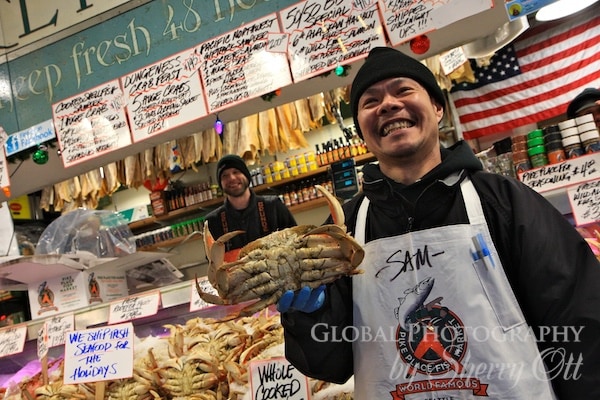 A big grin for Pikes Place Market! Thanks Sam!

Website: www.savorseattletours.com
Cost: $39 for 2 to 3 hrs and lots of tastings

Disclosure: Expedia (did you know they provided Expedia Activities?!) hosted my Savor Seattle Pike Place Market Tour. However, all of the opinions expressed here are my own â as you know how I love to speak my mind!