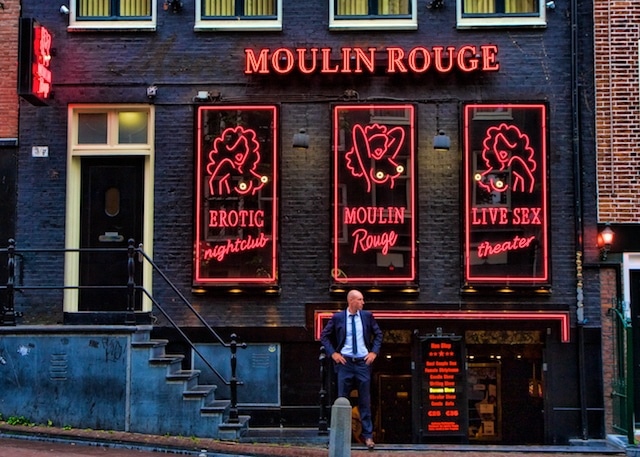 As the night falls, the red lights become more evident

I really didn’t know what to expect from the infamous Red Light District in Amsterdam; but I was certainly intrigued and excited to check it out.Â  I like the sleeze, the grime, the passionate, and I really like things that challenge my way of thinking – so I had high hopes.Â  Yet those hopes were tempered with my thoughts around “is this just another one of those…”Â  One of the bad things about traveling is that you’ve been a lot of places (duh), but they all start to seem the same in some ways.Â  Would the Red Light District be like Pad Pong in Thailand, or the Tenderloin in San Francisco, or like the alley I used to live off of in Vietnam (there were a number of brothels there)?

First of all – I have to answer the question that plagued me when I arrived in the RLD – Why use red lights?Â  Why not blue or yellow or green?Â  Here’s the answer I found on the origin of the red light:

According to the Origin of Phrases site, the term “red-light district” dates back to the railroading days around the beginning of the 20th century. Railroad crews used red lanterns for signaling and lighting, and most crew members carried one with them as they left the train yard. When they paid a visit to a working girl, the men would leave the lantern on the porch of the prostitute’s house while they were inside, probably to signal that she was busy.

My first stop in the Red Light District was during the day – where I found a very different scene.Â  Many of the windows were empty, and the ones that did have women in them were kind of shocking.Â  Not because they were raunchy, but because it was mainly women who were a bit older, slightly overweight and they all seemed to be standing/sitting there in their lingerie talking on their cell phones.Â  Very strange.Â  I wondered what the point was if they were going to try to ‘sell’ themselves while talking on the phone – I don’t really find that sexy.Â  In fact, I get upset when I’m at dinner and someone takes a phone call or checks their messages; it’s rude.Â  I’d have a hard time buying sex while someone was talking on the phone.Â  Yet, they were the veterans…so I defer to them.

However, as I wandered around the area, I realized that it’s a perfectly lovely area – can you believe I took this photo from one of the many canal bridges in the RLD? 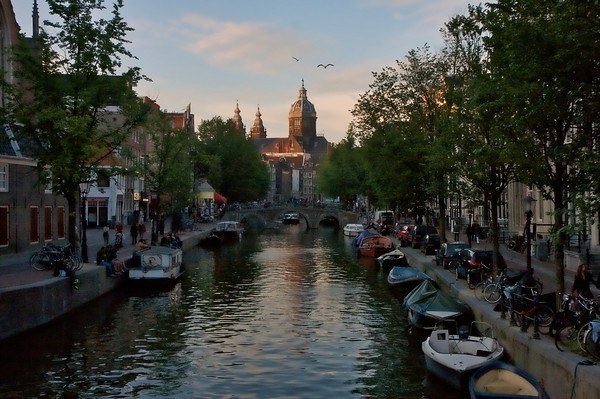 During the day it’s gorgeous, and it one of the oldest parts of the city so the architecture is grand, and the trees sway over the canals bringing an air of serenity.Â  However most of the stores in this area were for the sex industry – so I stopped in the condom store and was amazed at the creativity.Â  They turned condoms into art forms

There was also sexual art in the cobblestone path circling the Old Church which I found quite intriguing (the art and the placement of it next to the church). 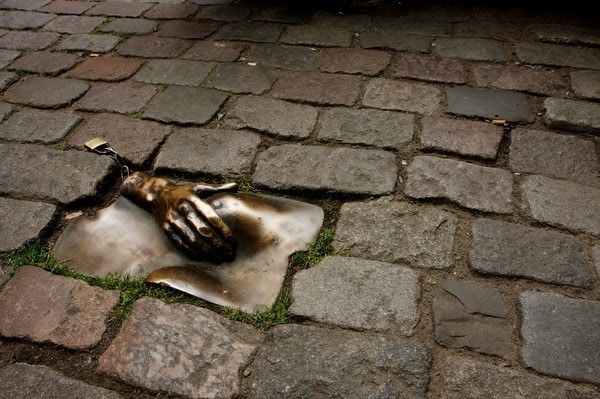 However as the night falls, the glow of the red florescent lights become more apparent. There is a distinct change in atmosphere as it gets louder and more crowded.Â  More boats of bachelor and bachelorette parties show up; there’s more drinking, more reveling, and more people watching.Â  This all reminded me of Las Vegas!

Slowly the ‘younger’ women showed up to work to sit in their windows and work on their marketing strategy. Yes this is work – a real job.Â  Prostitution was made legal in 2000 and thanks to that these women pay taxes and get health insurance.Â Â  Their marketing strategy seemed to consist of wearing very little, playing with their hair, and engaging men as they walked by.Â  Unfortunately you aren’t allowed to take pictures of the women working else you deal with their body guards; which I really didn’t feel like doing.Â  So this is really the only shot I got. 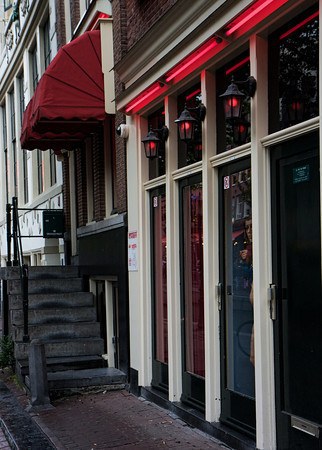 Look closely to see the woman peering out

So – you may also be wondering – why windows?Â  Why don’t the women simply stand outside like they do in Vietnam?

I found this explanation from Red Light District Guide Website

The authorities quickly realized that it was impossible to enforce the law in the area around the Old Church, the old prostitution district. So an unofficial policy of tolerating this business was adopted. As long as the women worked inside and were not standing in the door openings they could do their business. Women made potential customers aware of their presence thru a small opening between the curtains and a soft knock on the window.Â  As the years went by the curtains opened more and more.

I longed to learn more about this interesting neighborhood and history, but unfortunately I missed the one and only weekly tour from the Prostitute Information Center .Â  They had been short staffed the week I visited, but I had heard their tour and information is amazing -so definitely stop by their store if you are in the area.

Since I couldn’t take any photos of the windows, I had to find other things to photograph. 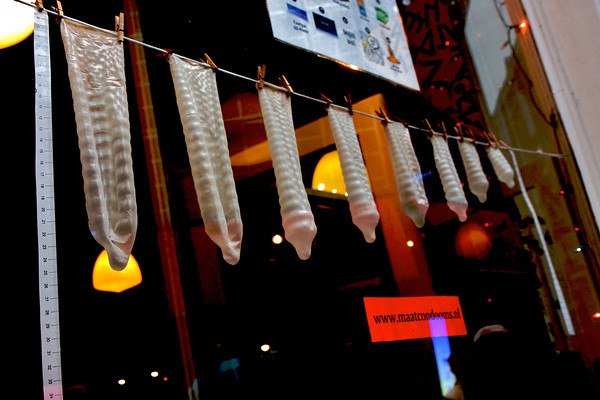 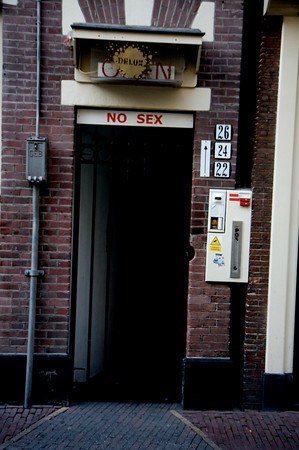 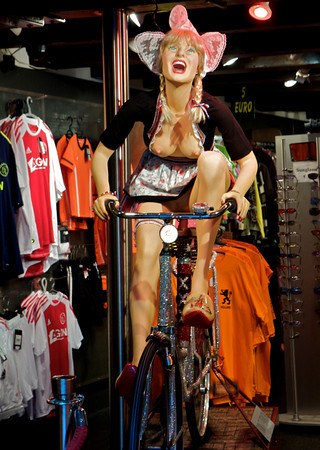 Not really sure where to start with this one!

Alas – to end my night – I decided to give it a shot myself…a little moonlighting behind the window.Â  The Prostitute Information Center allows you to take photos in their window.Â  So since I am a bit older, and slightly overweight, I decided to go with the marketing strategy of the veterans.Â  What do you think?!