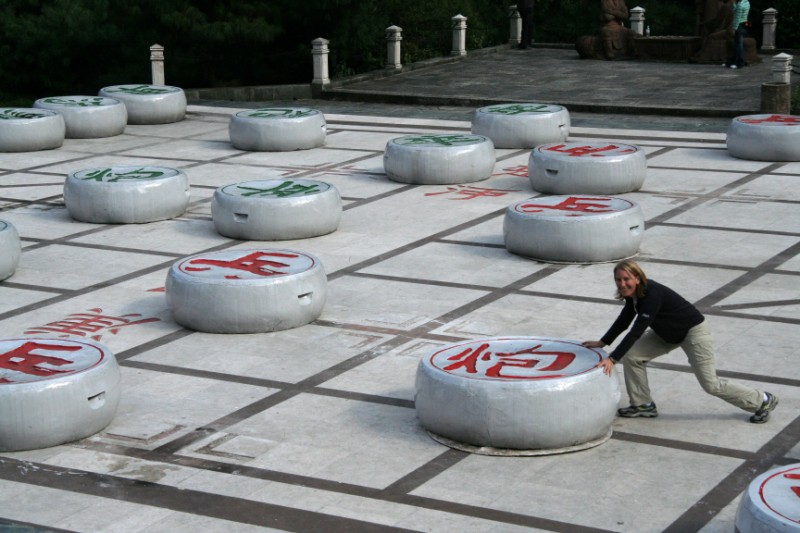 Cyndi in over her head in a game of Chinese Checkers

My sister and I were in search of a hiking trip on southern China. After much searching on the internet, I finally located a company called Backroads of China. Who seemed to cover much of the Yunan Provence in Southern China as well as included a fair amount of trekking that would challenge us. Plus â the company seemed very much about cultural exchange and simple travel through the region â which is my preferred way to travel as opposed to a big tour bus (just kill me). We signed up to travel with a small group and a Chinese guide for 8 days throughout the Yunan province. The group consisted of a couple from Canada, (Bruce and Margaret), a woman from Germany (Julia), a friend of mine from Australia (Rebekah), and my sister and I.

We started our Yunnan adventure in Kunming, a small Chinese town of 4 million people. Next we went to Dali via a local bus and found out that itâs normal and acceptable in China for people to be late for their bus, and the driver will wait for them if they call him and ask him to. We were 30 minutes out of Kunming when we had to pull over on the side of the road and wait for 4 passengers to be taxied out to the bus since they were late. Every ounce of my western upbringing was boiling inside, however my laid back India personality took over and said â ok â whatever â I will just take some pictures and wait for these losers to show up. Luckily there were plenty of dead ducks to photograph as we waited. The irresponsible people showed up, I attempted to give them shameful looks as they got on the bus â but they walked right by with no remorse in their faces and not one âsorryâ to the other 25 people that they made wait around for 30 minutesâ¦you gotta love Asia. After we started up again â we had the standard mechanical troubles which slowed us down even more, but we eventually made it to Dali only 1 Â½ hours late.

The Old Town of Dali is lovely, beautiful fountains, a restored city wall, cobblestone streets, surrounded by mountains and a lake (Lake Erhai) the size of Lake Tahoe. We were there to hike in the mountains that surrounded Dali and luckily the weather cleared up just in time for our hiking. We rode an old chairlift up to the hiking trail over hundreds of graves on the hillside overgrown by weeds and tall grass. We arrived at the top and started out for a 10k hike along a flat and beautifully groomed trail of cobblestones. It was a chance for the group to get to know each other as the walk was not strenuous or technical â so you could just stroll and talk. After 13 months of travel with various people and groups â I feel like I have been very blessed as Iâve always had wonderful travel partners. I wondered if this was where my luck would run out, but not a chance. I was still lucky to be placed in a group with adventurous, outgoing, normal people. I am starting to believe that there is a certain personality type that enjoys traveling and roughing it a bit â and maybe thatâs why Iâve always been able to get along with my travelmates because we have the same outlooks about travel.

Trekking is like running, you have a lot of time to contemplate things â life, love, happiness. Therefore I also used this time to contemplate what I was going to do with the rest of my life (as I do with all of my free time these days) â but I wonât bore you with that insanityâ¦.as I never really have any answers. However , during the hike we came across a little sign near a stunning view, it read:

Patron Saint for Mt Canyshan
The founder of Ming dynasty Zhu Yuanzhang sent his senior general Mu Ying to march on over Cangshan Mountains to conquer Dali. When passing the Horse Bathing pond, the general was struck by the idea of leading a secluded life to take off the armor and return to the farm. Perhaps that was because he was deeply moved by the marvelous rock here which is now a patron god in the hearts of many Bai ethnic people.

Photo: Cyndi and I standing next to the Mu Ying sign

I looked at Cyndi and saidâ¦see â even in the 19th century people were fed up with their jobs and decided there was a simpler, better way to live. Mu Ying is my hero!!! We joked around about it for a few kmâs â but honestly- the story did really amaze me. Human beings are frightenly similar at times â and everyone when put under stress needs to get back to basics at some point. I felt like I was on my Mu Ying journey this year â leaving my job to travel was the best thing that I have ever done.

I continued walking on my little Mu Ying high, happily strolling along. At the halfway mark we stopped for lunch at a little open air shack on the hillside. Had you transported this establishment to a city setting â you would never ever go inside of it to eatâ¦the dirt floor, sheet metal roof, âbushâ toilet, and dirty tables would make you immediately avoid it afraid that food poisoning was eminent. But when you are on a mountain â you really donât have a choice â plus â the smell coming out of the shack was amazing. They had a large wok and a bunch of coal to heat the fire beneath, and from that they produced some of the best food Iâve had in all of China â it was astonishing.

As we were waiting for our food, I was surveying the big 3 gallon bottles of liquid on the table. It had a bunch of fruit floating in it and a yellowish color. I asked Jonathon what it was and he told me it was fruit wine followed by âDo you want to try some?â I hesitated for a second and decided â what the hell â it looked interesting and since it was alcohol it had to be hygienic! He brought me out a large juice glass full of the yellowish thick liquid. There were some fruit and spices floating in itâ¦different for wine â but I was game to try it. I took a whiff â as you would do with any wine â and I knew right away as I choked down the alcohol smell filling my sinuses that this was not wineâ¦this was grain alcohol. I tried a sip gingerly and sure enough â I could feel it go down my esophagus as if it were lighter fluid with a slight fruit taste. Obviously the translation for wine was a bit off â and now I had this huge juice sized glass of booze in front of meâ¦it would be a long afternoon. Normally after drinking a bit of pure alcohol you eventually get used to it and it goes down a bit smoother â but not this stuff â it was as rough the last sip as the first. I tried to pass it around to have otherâs help me with choking it down â but the glass always seemed full no matter how much people drank! Needless to say â I was a bit tipsy by the end of lunchâ¦but this really wouldnât pose a problem as the hiking was easy and pleasant â I could weave down the path without a problem.

We packed up our stuff to leave and continue our hiking, but instead of taking the little cobblestone path, we start climbing. In my âwineâ haze I asked Jonathon where we are going and he points to a sign that says something about a waterfall with 7 wells. Shitâ¦I wasnât legally sober to drive â let alone do any walking around a steep waterfall! Yet â up we went â I just tried to focus on following my sister up the steep rocks with little footholds as the water was rushing by us. We kept following the trail of footholds and eventually got to the top where we had to cross over the water and then come back down the other side. I wasnât too steady on the water â but made it across to the other side. The next obstacle was making it back down. I hate descending when Iâm sober – this wasnât going to be pretty. We came to an area that had washed away the steep trail and we were forced to gingerly scramble down the slippery rocks on our butts one at a time with Jonathonâs help. Each foot had to be placed gingerly on a ledge and each step had to be planned out carefully. While we were descending we saw a Korean tourist slip and fall into the waterfall â luckily he only slid down into one well and not over the cliff side â regardless â I think my heart was pounding from that point on! It looked terrifying and extremely cold! We made it successfully and slowly back down to our lunch spot where we could continue our easy strolling trail. The waterfall area was beautiful, but a bit frightful after a juice glass full of moonshine.

We rode the cable car back down to Dali and I winced from a slight headache and presumably an oncoming hangover and altitude adjustment. We went out for a dinner of dumplings that night after walking around the old town wall. Jonathon once again asked me if I wanted another glass of wine, but I wisely decided to stick to the local beer for beverages from now on. I toasted Mu Ying and dug into the dumplings!

One Response to "My Ancient Chinese Hero â Dali"