The fly fishermen sitting next to me have been coming to Country Haven Fishing Lodge along the Miramichi River in New Brunswick for decades. However, they donât come for the fishing, they come for the good food and a good nightâs sleep. Nope, it has nothing to do with the fishingâ¦not at all.

Okâ¦thatâs what they wanted me to write.

I sat at the table eating dinner (what I would call lunch, but what I call dinner is supper here. Confused yet?!) with a group of 4 other fishermen who had all been coming to Country Haven for decades. They discussed how they didnât want to let the secret out about how great the fishing was here. In some ways, I – the travel writer – was seen as the enemy. I knew they were sort of joking around with me, but there was some definite truth to this conversation too. They had a good thing, and when you have a good fishing thing, sometimes you donât want to share.

However, that was quite the opposite feeling I had from Byron and his wife Heather, the owners of Country Haven. They wanted everyone to come and try fly-fishing! They started the lodge 18 years ago and it has turned into a thriving outdoor travel business along the Miramichi River with 90% repeat business.

Byron showed us around the 3 bedroom wood cabin. It had a rustic dÃ©cor trimmed with fishing motifs like all good cabins. We oohed and aaahed at the killer view of the river, big porch and even bigger grill; yes we would be pretty happy here in our cabin along the Miramichi.

Our cabin at Country Haven

Inside of our cabin

I sat in the screened in gazebo by the river and watched it flow by. The Miramichi looks like a normal river, however it has some special inhabitants running through its waters, Atlantic salmon. More than 100,000 Atlantic salmon make their way up the river every summer and fall and back out in the spring; itâs a superhighway of salmon! This one river produces nearly one half of all the rod-caught salmon in North America.

However itâs also a river that is perfect for canoeing, kayaking, tubing, and thereâs an abundance of wildlife viewing that you can do along it. Country Haven offers a variety of river activities for the fisherman and outdoor adventurer. In between fly-fishing lessons, we took to the water in canoes and kayaks enjoying the stillness of the river and the life along it.

However, it is the salmon that bring most people here, and we were no exception. I wanted to continue my quest to learn how to fly fish and the Miramichi River was the perfect classroom. The Miramichi is only one of a few rivers in the world where fishing rights are still privately owned; hence there are a number of lodges along the river offering fishing in their private pools with guides. The river is strictly catch and release, so it really is all about the sport.

The Atlantic salmon are hatched and grow briefly in freshwater and then migrate to salt water while immature to grow to maturity, before returning to fresh water to spawn and complete their cycle. This journey means the fly-fishing on the Miramichi is ever-changing throughout the year; size, color, and strength change which means your fishing strategies also change. Spring fishing is the easiest since the fishâs food stores are depleted and they are looking for food. Summer and fall fishing are more challenging. There are many fish, but they arenât necessarily hungry or easy to catch. And of course, I was there in July; apparently I like a good challenge.

We woke up early in the morning ready to fish because apparently fish, like mosquitoes, like mornings and evenings. The river had a steamy haze hovering over it and little foam patches everywhere.

Byron came by our cabin with our paperwork and fishing licenses cheerful as ever.

âWhatâs the foam on the water,â Pete asked Byron.
âThose are fish farts,â Byron responded.
Pete began to nod and say âOhhhâ but then Byron started laughing and Pete knew he had been had. That was probably one of many old fishing jokes Byron played on new fishermen! 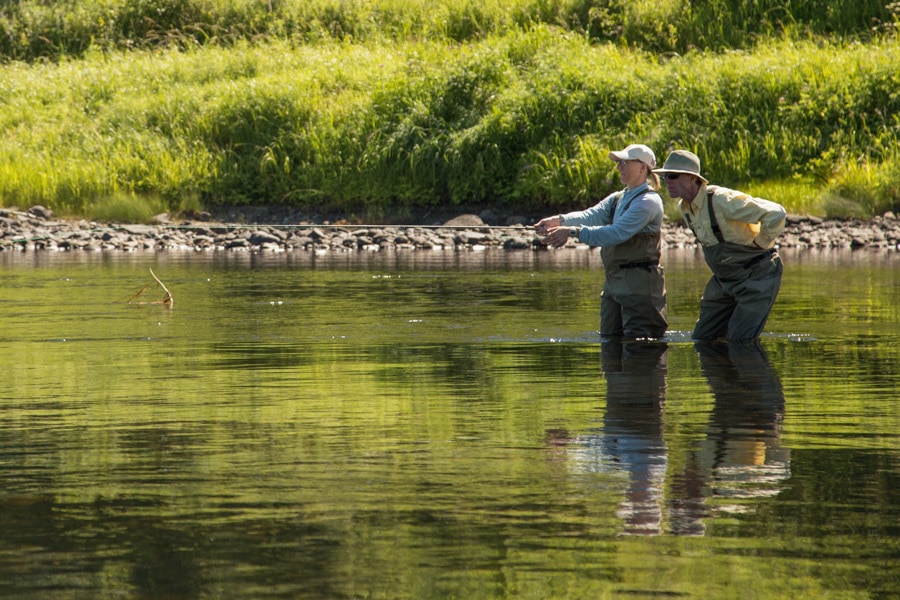 The lodge furnishes all the gear you need; waders, pole, flies, and a guide. You are required to fish with a guide on the Miramichi River. Jeremy, my guide, was a third generation guide and had been guiding for 20 years. He was tall and skinny, and had a very mellow personality, perfect for a fishing guide. When asked he told me heâs out fishing 7 days a week.
âThe woods and the river are the only things that matter here,â Jeremy said as I asked him about the area. And with that Jeremy remarked, “Well, lets go get some fresh air.”

After trying my hand at fly-fishing in Maine last summer, I had developed a little crush on fly fishing. I wanted to spend every moment with it and learn about it. I wanted to go home and meet itâs mother. I wanted to have a poetic cast that looked like it was weightless and effortless. I wanted the fly line to beautifully curve and flow above the glistening water. I was a like a wide eyed tween girl, daydreaming about the idea of a fly fishing ârelationshipâ; me holding a giant Atlantic salmon in an Instagram shot with my waders on and fishing rod in the other hand. But I really knew nothing about how to make that dream come true. It was sort of like one of my nieces trying to date Justin Bieber â pretty far fetched. Thatâs where my guide Jeremy came in; he at least gave me a chance of my dream becoming a reality. 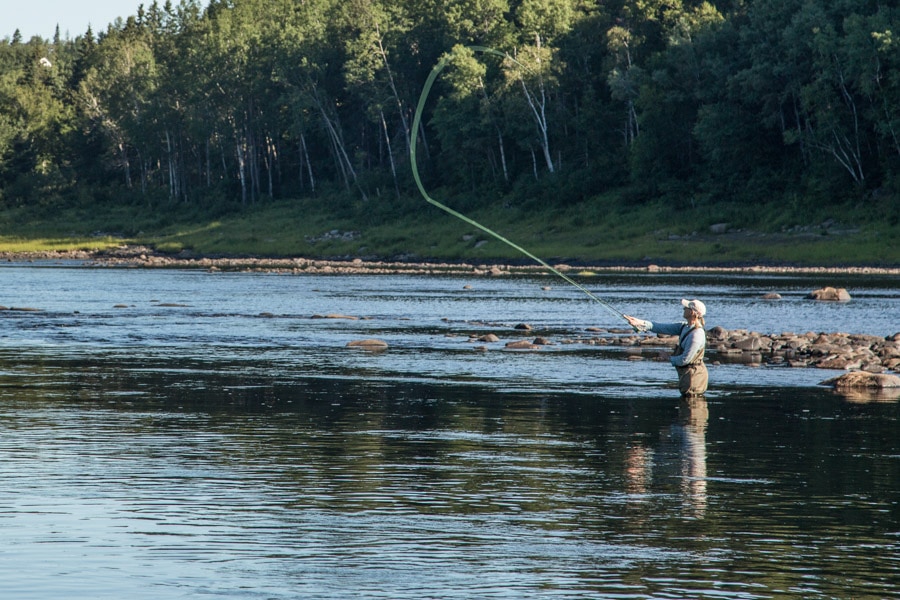 The beauty of casting

Casting was like an intricate dance, fluid but deliberate. The fly undulates back and forth whistling as it cuts through the humid air. Then with a forward force, the line is cast. It floats like a willowy strand curving and moving ever so little, ending with a little âplunkâ on the water. And with that, the game was on.

But this game seems to be stacked against you; not just for beginners, but for everyone. Atlantic Salmon donât come into the river to eat in July; they come to make baby salmon. Unlike other fishing or spring Miramichi fishing, summer fishing means you are trying to catch a fish that isnât hungry. Itâs not about putting a good tasting âcarrotâ out there in front of them to bite. Instead you are placing a fly out there in front of them, hoping they are playful or annoyed enough to go for the fly. When I learned this, it was an âa-haâ moment for me; I realized this was going to be harder than I ever imagined. The challenge of trying to get a fish that isnât interested in eating to take a fly, is what makes Miramichi fly fishing so addicting.

The Beginning of an Fishing Addiction

They say the addiction starts when you feel the first pull. It was raining steady now, but it didnât really faze me as Jeremy told me that the fish like rain; if they liked it, so would I. I had started throwing out good casts – ones that went further and had that nice little âplunkâ of the fly plopping in the water. Â Then I saw it – a fish, but I questioned if thatâs what I really saw. Then I saw a little fish head coming up again to snap at my dry fly and I knew I was close. Suddenly, I felt a tugâ¦and I yelled at Jeremy – âI got a fish, what do I do?!!â 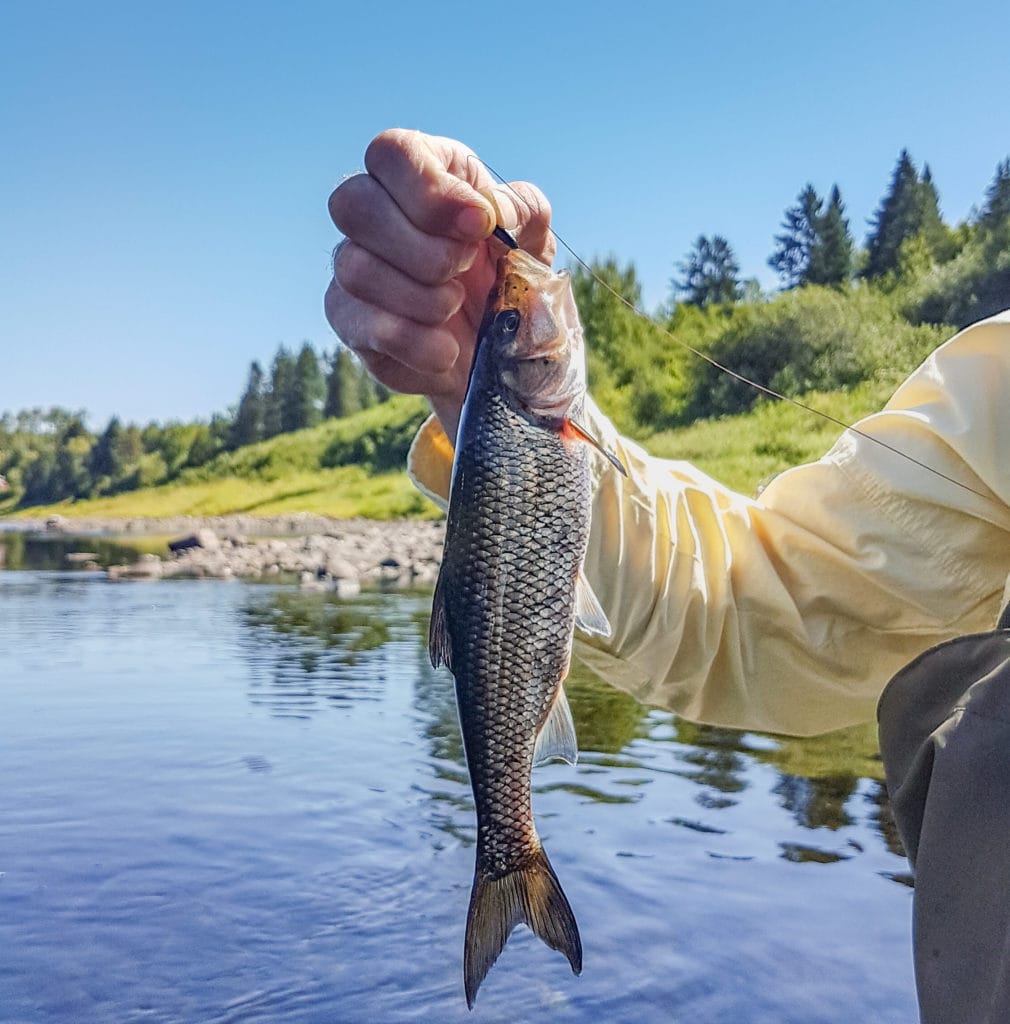 It’s not quite a salmon…but it’s something!

Jeremy took a look at me and the bend of the rod and knew right away from a distance it wasnât a salmon, but he came over to give me direction regardless. Sure enough, it was a Chub, a small fish that was certainly not a salmon, and certainly not what I was hoping to catch. But reeling that little Chub in did something, it created adrenaline, and as we freed the Chub back in the water and I watched it swim away, I suddenly understood how the addiction starts. I was more determined than ever to hook a salmon after my chub incident. This is the real âlureâ of fishing I guess; a small taste will hook you for life.

After spending about 3 hours out in the water, the rain had stopped, the sun went down, and the mosquitos started circling. We had to call it a day. After being out in both the morning and evening, all I caught was a little Chub. However I was pretty damn proud of that Chub! As we headed back to the lodge Jeremy suggested I come back in the spring again when the fish are hungry. 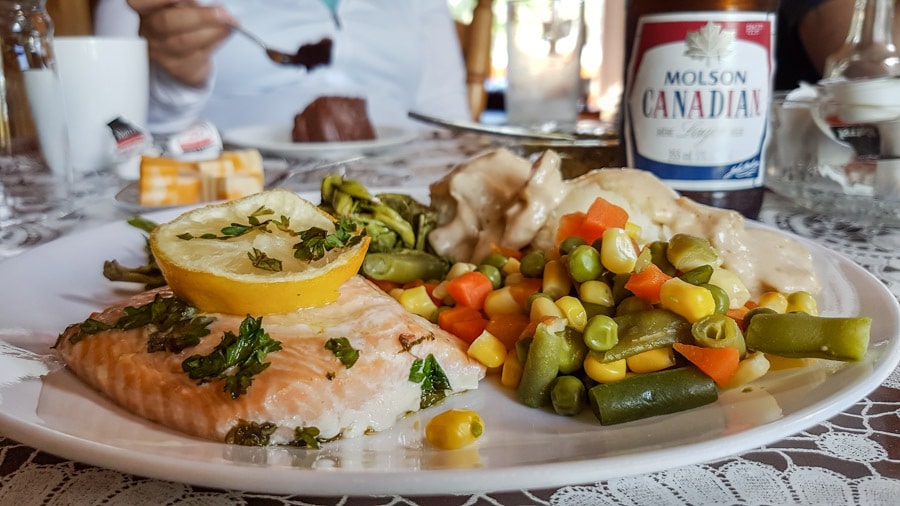 The closest I got to salmon…

After all of the time in the water I hadnât realized how hungry I was myself until I got back to the lodge. A beautiful plate of salmon and vegetables awaited me â sort of ironic I suppose. I sat and ate my dinner (and delicious homemade chocolate cake) while talking with the other long time Country Haven patrons and fishermen. I thought to myself, I totally understand why they didnât want me to write about the Miramichi fishing, they want this magical place to themselves. So go ahead, move on, thereâs really nothing to see hereâ¦

I was a guest of New Brunswick Tourism during my time at Country Haven, however all opinions and small fish caught are mine.