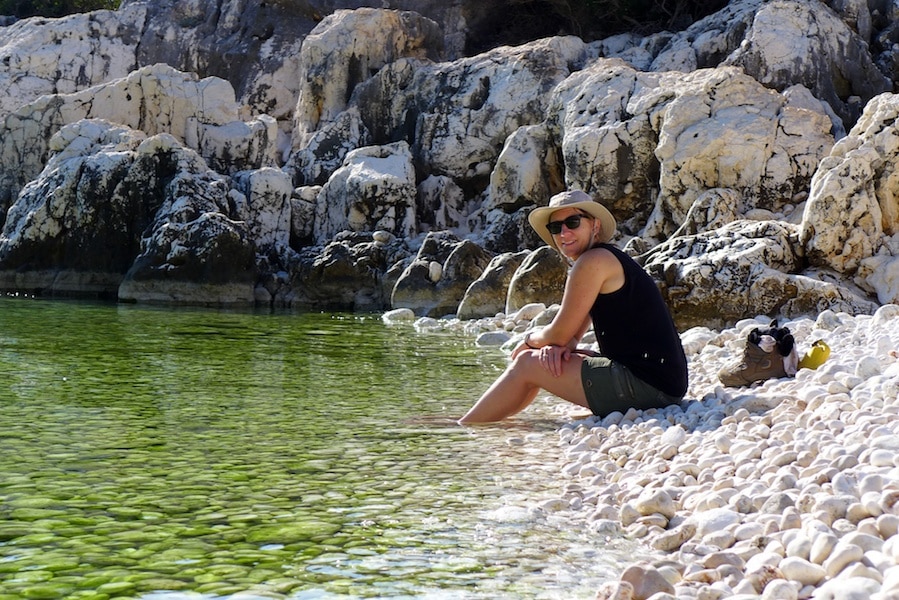 Soaking my feet in the Mediterranean

The day had finally come. The day I had to do it all by myself â no boat, no help. I had to put on my full pack with water and food for 2 days. As I strapped on my pack I about toppled over. It was going to take me some time (and lots of sweat) to get used to this new center of gravity. I had a long way to go to âbecome oneâ with my backpack on this Lycian Way self guided trek. Â And I certainly Â wasn’t going to get any help with my pack.

It didnât take me long to fall behind. The heat was horrible after lunch and so was my attitude. We had quite a climb ahead of us and debated trying to short cut it to get the pain over with quicker â but decided to stay on the marked trail instead and take the longer switchbacks. It ended up being a good idea to stay on the trail as even though the other route was more direct â Iâm certain we would have been lost. The heat made it hard enough â we certainly didnât need to get lost on top of it.

The longer trail went along the coast on a little cliff and then turned back and started to climb up the hill via switchbacks. The more I climbed the more I spiraled out of control into a vortex of anger, disappointment, and self-loathing. I could barely keep Warren, Betsy, and Andreas in my sight. Iâm not exactly sure what caused my horrible disposition that day, but I do know that I wasnât embracing the hike or every step â I was hating it â and my backpack. 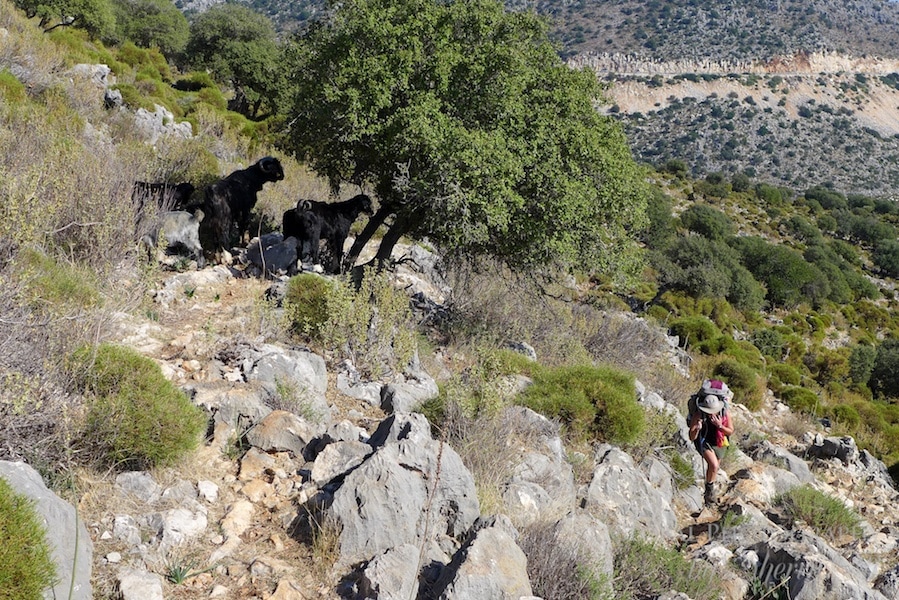 The goats have the right idea – hiding in the shade while I hike up in the sun. 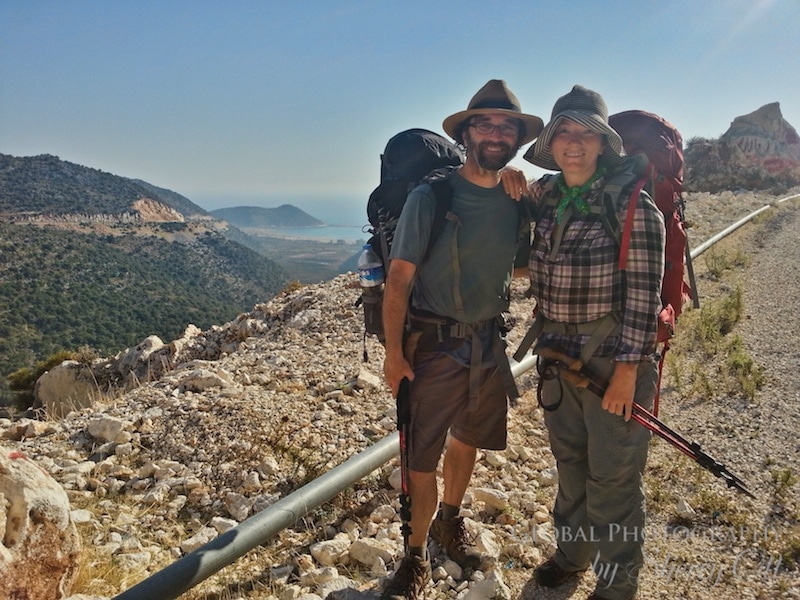 Warren and Betsy make the climb from the beach in the distance.

My mind was preoccupied with the thought of how I would get over the mountain at 3000 ft with this horrible heavy pack â and this bad attitude? With every laboring step, I did a mental inventory of my pack trying to figure out what I could get rid of and I came up with nothing.

Somehow I made it through the day â but I wasnât too joyful to be around. The four of us made it to a campground which Captain Osman told us about when we left the boat. He said it had a wonderful view of Demre from above and he was absolutely correct. We walked into Santaâs Summer House â a campground and cabins situated above Demre. Since we were camping, I referred to it as Santaâs Summer Lawn. It had a spectacular view of Demre below â a town that was 80% greenhouses â and hence we had a spectacular view of greenhouses.

This part of Turkey is a breadbasket for all of the Middle East and Europe. Itâs one and only focus is agriculture. Producing crops of tomatos, zuchinni, oranges, pomegranates, and apples year around. It seemed as if every family owned a greenhouse.

An old man came out to greet us as we walked into the campground. He spoke no English but soon he was on his cell phone handing it over to us to speak to someone on the other end who could speak English. I think he had been through this âdanceâ before with Lycian Way hikers. We learned he was the caretaker and the owner was on her way over to talk to us and get us settled in. As we hung up the phone the caretaker had already went inside and came back out with a juicy pomegranate cut in quarters â the dark red juice running down his hands as he handed them over with a big welcome smile. 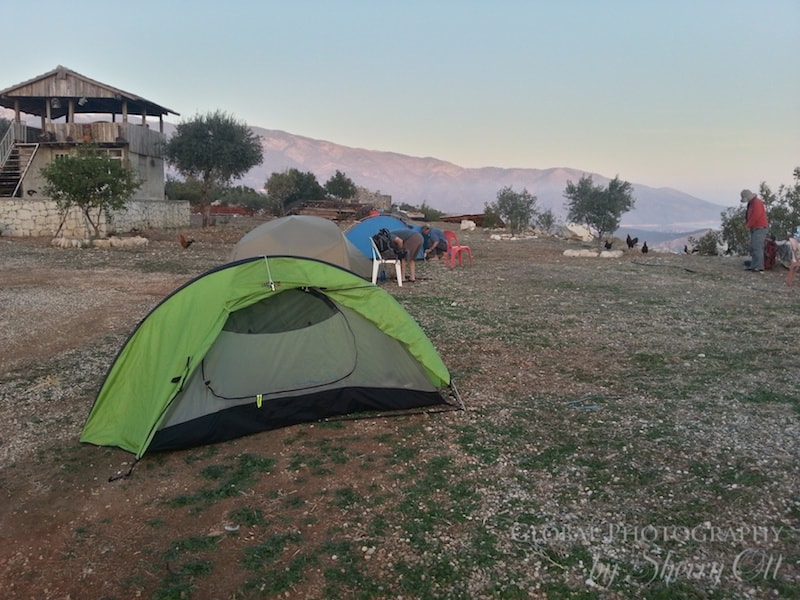 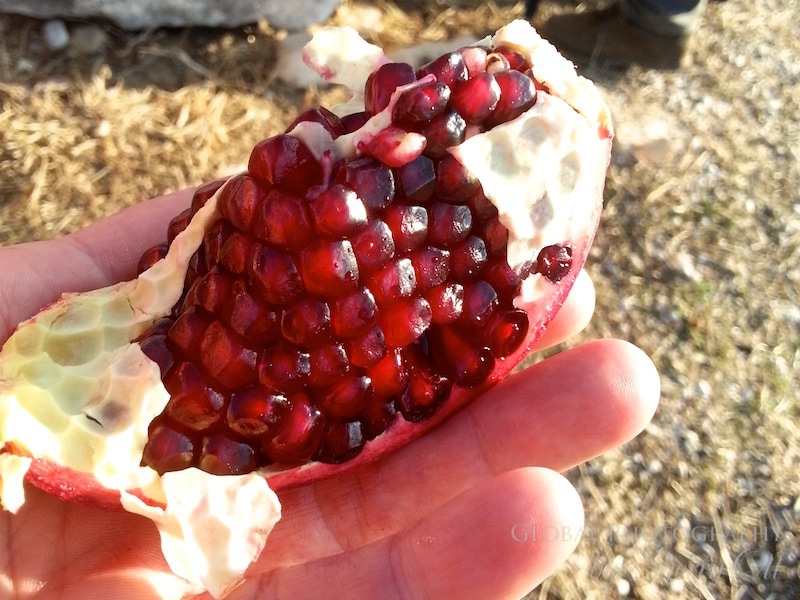 Pomegranates were in season in November

The owner came and helped us get all settled in â and allowed us to camp there for free. She even opened up one of the cabins to let us use the bathroom during out time there. We ate our cold dinner of tomatoes, bread, cheese, and some sausage. The caretaker invited us to his porch and continued to feed us bottomless cups of tea and fresh fruit. He spoke no English, and he smoked like a chimney – but he seemed overjoyed to have visitors. We patched together a conversation with Google Translate on my phone and was able to find out all the basics â family, kids, age, marital status â the normal stuff.

I woke up with a nagging thought about the pending mountain pass â I didnât really want to do the mountain â but pride was pulling at me. I decided I would put it aside and consider it during our hike down to Demre today. After all, maybe the easier descent would give me a better attitude. We only had a short 2 hours before we were to reach Demre (all downhill).

We started off towards Myra and I felt good. A woman motioned to us that we were going the wrong way as we walked past her little home that looked more like a shack than a home. The 4 of us thanked her and turned around to try to go find the last mark we had see and figure out where we went wrong (a common problem on this trail).

We pretty quickly found the turn marking we missed. But we all stood there and stared at the way it directed us to go â we were baffled. There was no real apparent path, instead there was over-grown brush filled with thorns greeting us and my bare skin. Shit. This wasnât going to be a fun, âeasyâ descent at all. 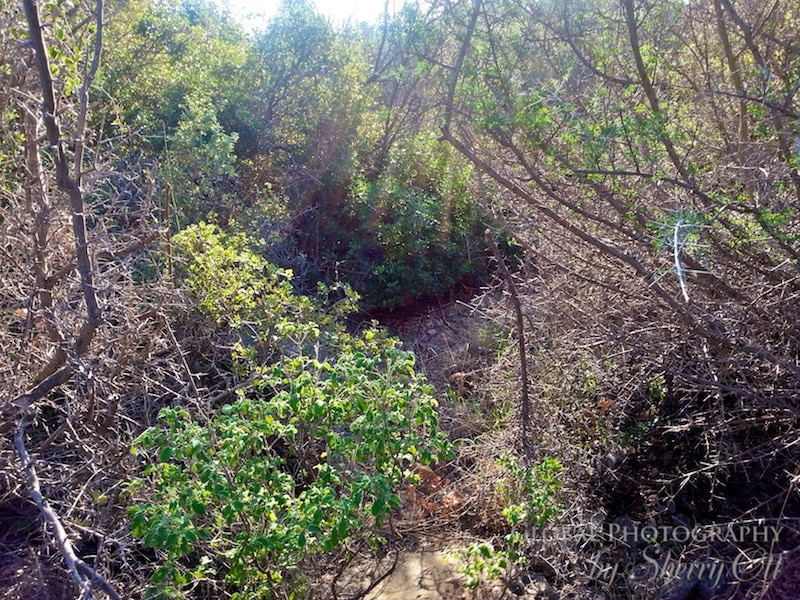 The Trail of Thorns – not quite what I was expecting for today.

I had of course worn the same stinky dirty shorts and sleeveless shirt I had been hiking in every day â not a good choice for this thorn-infested trail. Warren led the way through the thick thorny brush looking for marks. I tried my best to minimize the pain but the scratching and irritation on my legs were like a burning rash after 20 minutes of hiking in this mess. After about 30 minutes there was finally a clearing that I could put down my pack and find the legs I could zip onto my hiking shorts and get some protection for my irritated legs. 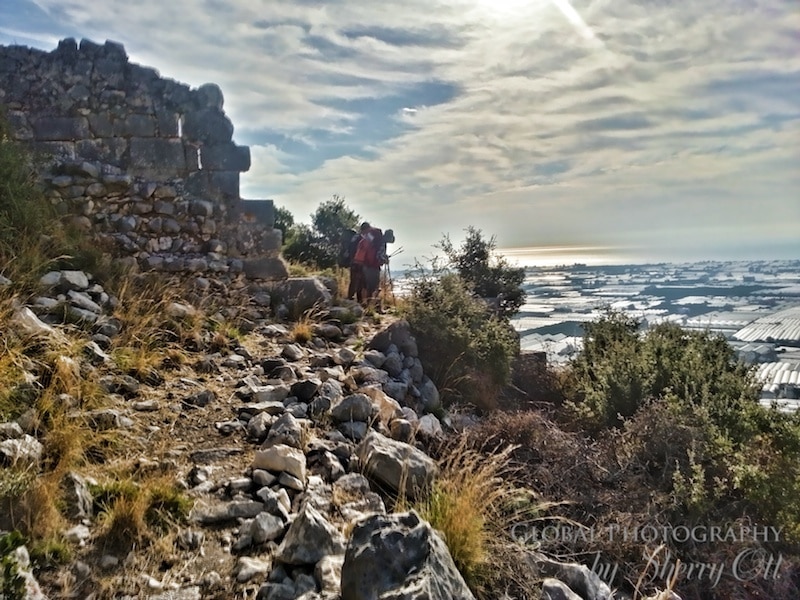 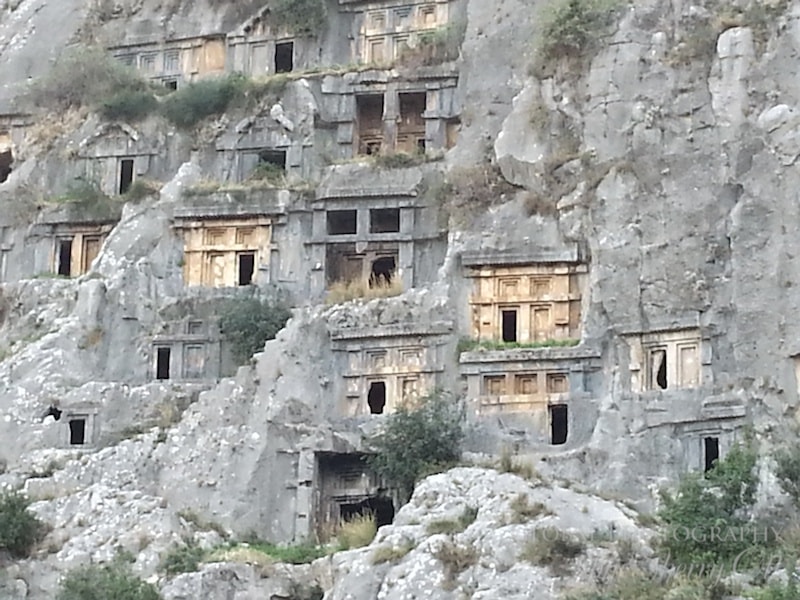 Tombs built high up into the cliffs

The Myra ruins were high on a hill and were crumbling (like all of the ruins on the Lycian Way). There was no one around as no one really hikes up to the buildings from Demre. And apparently only fools like us hike down from the top on that horrible trail! After taking a few photos we started the descent of hairpin turns down the cliff into the agriculture town of Demre.

Demre was not only the home of the thorny ruins of Myra and tombs built high up into cliffsides (seriously how did they do that â could they levitate?), it was also home to Baba Noel (father Christmas).

We stayed in the one and only pension in town and the owner happened to love the Lycian Way and catered to hikers. He was a breath of fresh air as his English was pretty good, and this was the first time we had found someone who was building a business around the Lycian Way. He was a wealth of information about the mountain pass and the trail. We had a great night learning more about him, the trail, and the history of the area as we ate a feast his wife cooked up and drank beer. 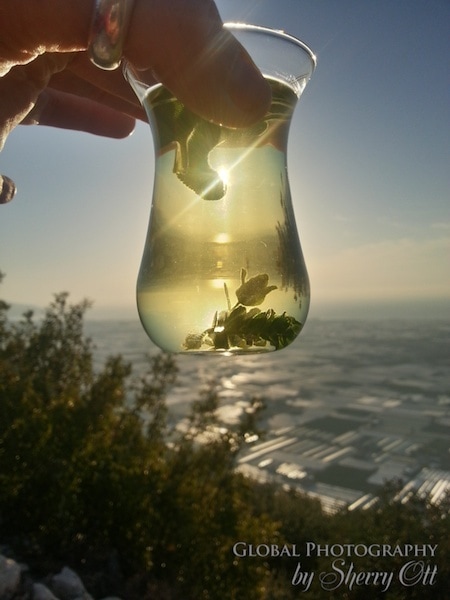 As I sat in the pension that afternoon sipping tea and nursing my cut up legs â the nagging issue of the mountain engulfed my thoughts again. It was time I made a hard decision. I wasnât going to go over the mountain â I was going to take plan B instead. Despite what you may think, I am not a hard-core adventure traveler. I donât actually enjoy really roughing it, but I endure it because I love to hike and I like getting closer to a culture by camping. However, I normally do hiking that is more supported â and this was my first independent hike where I was carrying all of my own camping gear and navigating ourselves.

I had thought long and hard about it and came to the conclusion that I didnât really need to put myself through a mountain pass if I wasnât enjoying it. Life is too short and things you choose to do shouldnât be so painful. I do like a challenge for sure â but when a challenge becomes something you absolutely dread â then itâs not fun.

My plan B was to let Warren, Betsy, and Andreas do the mountain pass for 2 days while I met them on the other side in the town of Finike. But instead of sitting around – I planned to do some hiking by myself around the areaâ just to continue to get my hiking legs under me and build up some strength.

I finally felt a weight lift off of my shoulders. My mind had been navigating these thorns in my head for the last 2 days. By making the decision to simply skip the mountain pass and do other hiking it was as if I zipped on my pant legs all over again and the nagging thorns disappeared.

4 Responses to "Trail of Thorns"