War Games Along the Lycian Way 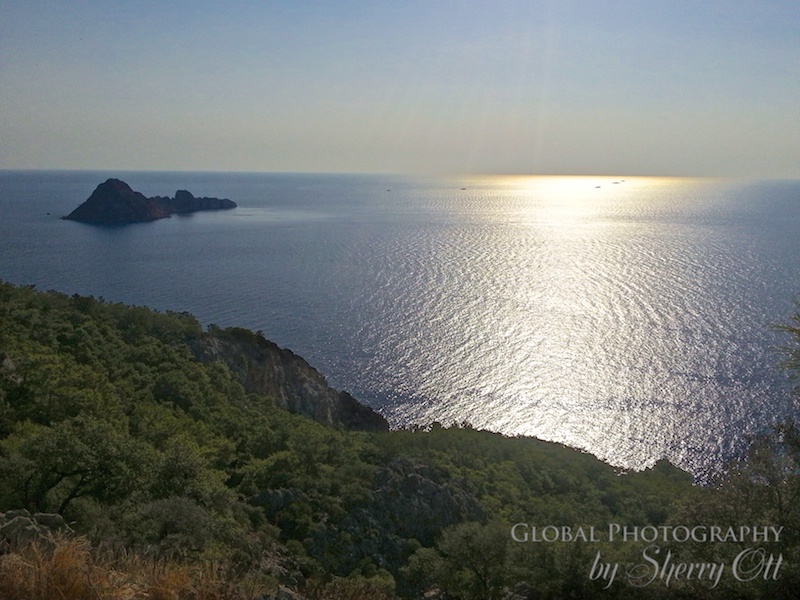 Way out on the horizon – see the dots ?Â  It’s ourÂ  morning wake-up call – Navy vessels maneuvering for what?

As the light started to filter in through the tent I heard it. Chug, chug, chug, chug, chug, chug. The even puttering sound was soothing to wake up to, but when my mind woke up and remembered where I was â camping at a remote lighthouse in Turkey â I was immediately confused. I should be waking up to birds, and maybe a slight breeze with trees rustling gently in the background. But this was the sound of a big boat, dare I say vessel, way down in the water below the cliff we were perched upon. It wasnât just the sound of one vessel â but many.

I got up and started tearing down my tent while watching the big vessels chug along the Mediterranean below. Warren, Betsy and I wondered what all of the commotion was about as the boats seemed to be maneuvering in some fashion. For a fleating moment Syria popped into my head and I became aware of how out of touch Iâve been while hiking the Lycian Way. This is normally one of the things I love about hiking â you are completely out of touch, itâs a chance to escape. However, when you wake up to a game of real life Battle Ship, it does make you stop and wonder what has been going on in the world!

Thanks to my Telecom Square mifi device I did have an internet connection on my smart phone â so we quickly did a check on world news and found nothing alarming and thankfully didnât have to break into a Red Dawn reenactment. Instead we calmly ate our simple breakfast of bread, cheese, and olives and started our hike for the day. We were headed approximately 16 km (10 miles) to the beach-side village of Adrasan on the Lycian Way.

We continued our hike around the peninsula climbing and descending frequently but nothing too strenuous. I actually enjoyed the rolling ups and downs as it requires you to use different leg muscles. Even though we started early â it was hot in the sun, but we also had great shady forests to also walk through. The whole time during our walk we were serenaded by the war games. They were actually shooting torpedoes and maneuvering. Occasionally weâd stop and watch them â it was a strange sight to see and hear. Most people never get to witness such a thing outside a movie theater, but here we were in the middle of nowhere watching the Turkish military practice!

There werenât many water stops on this route, so I was happy that I had conserved mine the night before. We stopped for a light lunch of fruit and bread and enjoyed the views. The views along the Lycian Way Adrasan were the best I had experienced yet on the Lycian Way. This section is a great small section to do if you are looking for a shorter Lycian Way trek because it was easy to walk from village to village and technically no camping would be necessary. In fact, we saw a number of hikers along this route.

We descended into Adrasan â a popular, yet simple, beach resort town for the Turkish. It had a lovely bay and beach and it was lined with simple hotels and pensions. It was a great location to hang out by the beach, go hiking, or biking. It wasnât very commercialized at all and there were no big hotels or high end places â this was simplicity. However we arrived in mid November when the beach season was dormant and many of the little hotels and pensions were closed for the season. This seemed to be a common issue if hiking at this time of year.

As Warren and I checked out the beach and considered camping there Betsy went in negotiated a room for the 3 of us at great off-season rates at the Ãn Otel. Yay for hot showers! The manager, Kareem, was so helpful. He made us a feast for dinner and even got up early to have breakfast ready for our early hiking departure the next day. After my horrible experience with the Pension owner in Demre, it was nice to meet Kareem who was helpful, respectful, and an ambassador to the area!Â  Kareem also informed us the war games we witnessed on our hike were actually war âgamesâ. The Turkish military practices a couple times a year and warns all of the locals and fisherman when they are scheduled to do so. So â if you are hiking to the Gelidonya lighthouse expecting to see the battleship games, itâs a pretty rare occurrence and we were just lucky I guess. However, the hike from the lighthouse to Adrasan really doesnât need anything to make it better â it was probably my favorite stretch of hiking along the Lycian Way so far! 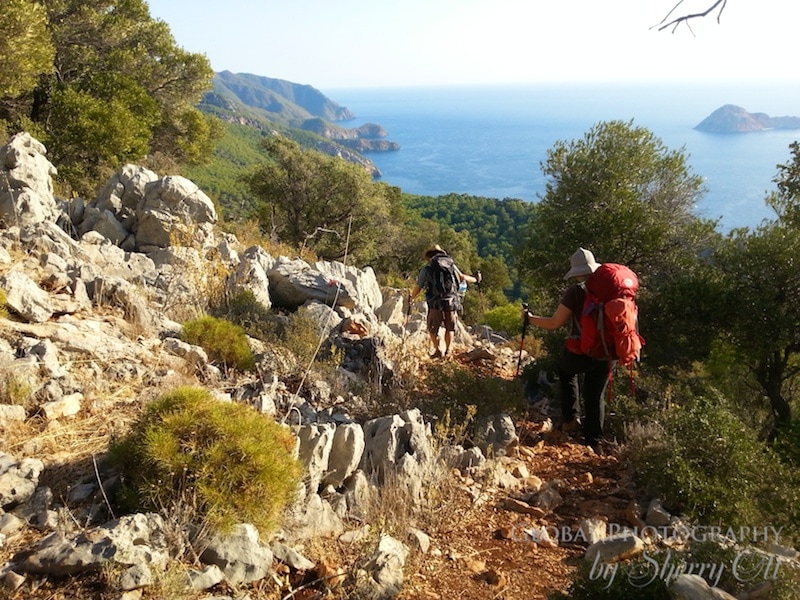 Hiking towards Adrasan from the Lighthouse. Spectacular views of the peninsula 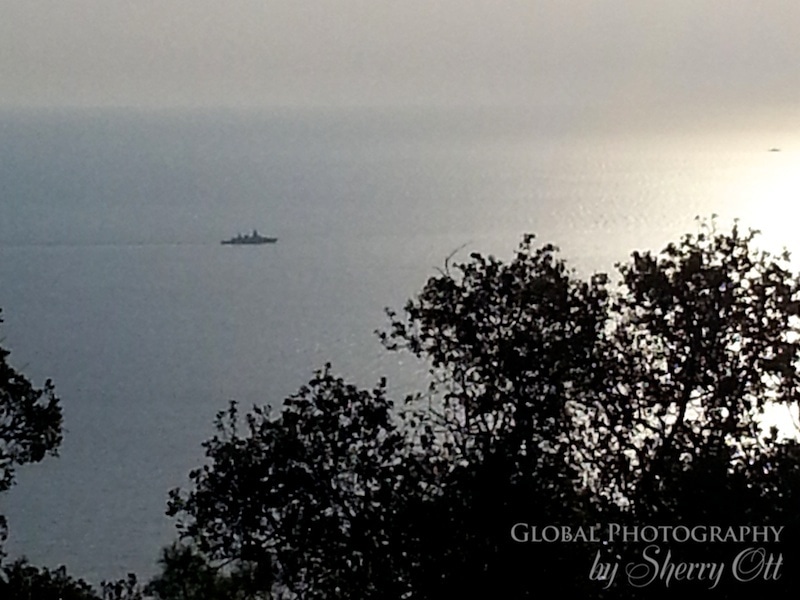 Battle ship in the distance! 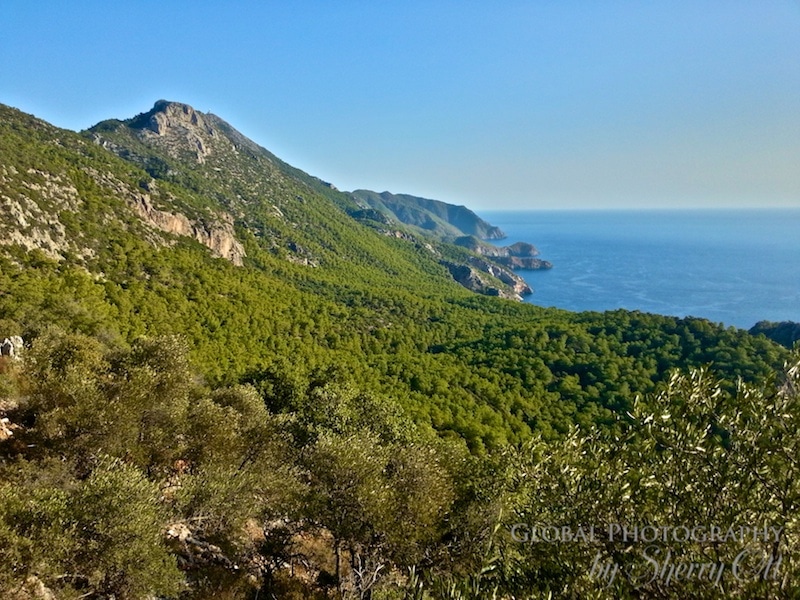 View from the trail – green coastline as far as you can see! 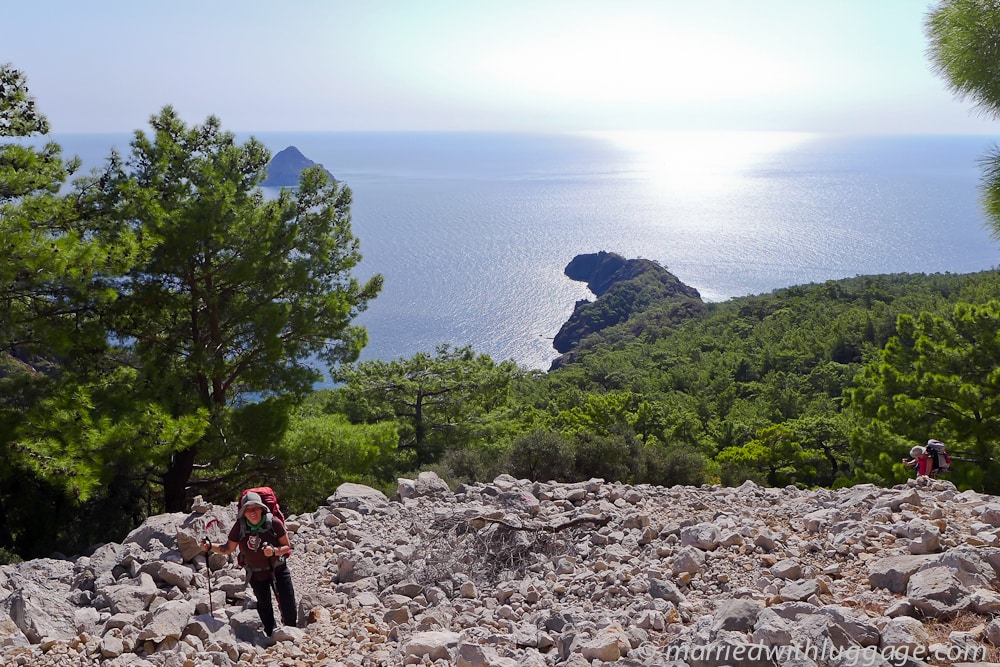 Betsy and I crossing over a scree field on the trail. (photo by Warren Talbot) 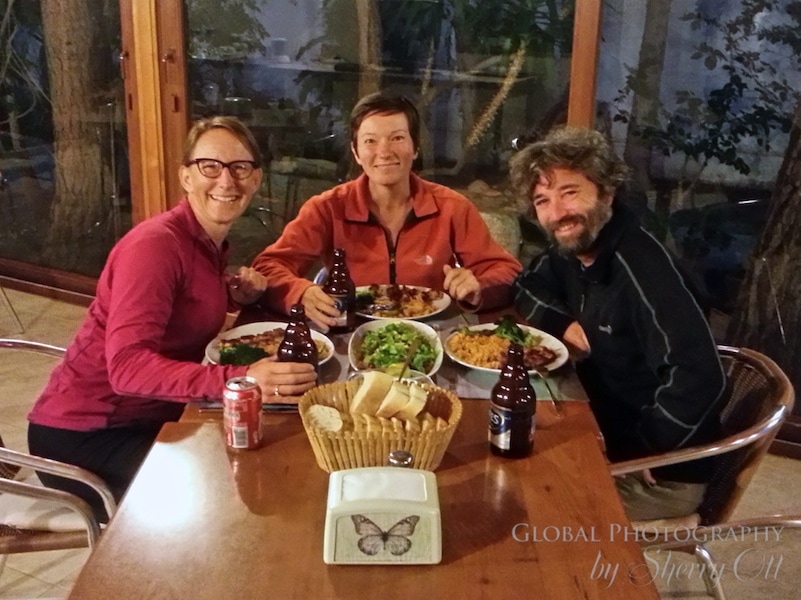 Betsy, Warren, and I enjoying our dinner feast at On Otel

7 Responses to "War Games Along the Lycian Way"