Luxurious adventures in the Atacama Desert

Luxurious adventures in the Atacama Desert

I walked down the long stone walkway, full of anticipation. The landscape was barren and dry, and the building in front of me was simple and brown blending in like camouflage. I felt like a giddy child overflowing with excitement about what was to come. I opened the heavy wooden door and my whole world changed.

After a 12 hour bus ride across the northernmost road from Argentina to Chile I needed this. Now Iâm not one for a bunch of pampering, Iâm a pretty simple traveler who is satisfied with the basics. But sometimesâ¦well, sometimes you just want to feel pampered. After roughing it in Argentina and sleeping in places at 10,000 feet with a space heater that didnât work and treating food only as fuel to keep us going, I was ready for the luxury of Tierra Atacama Hotel. 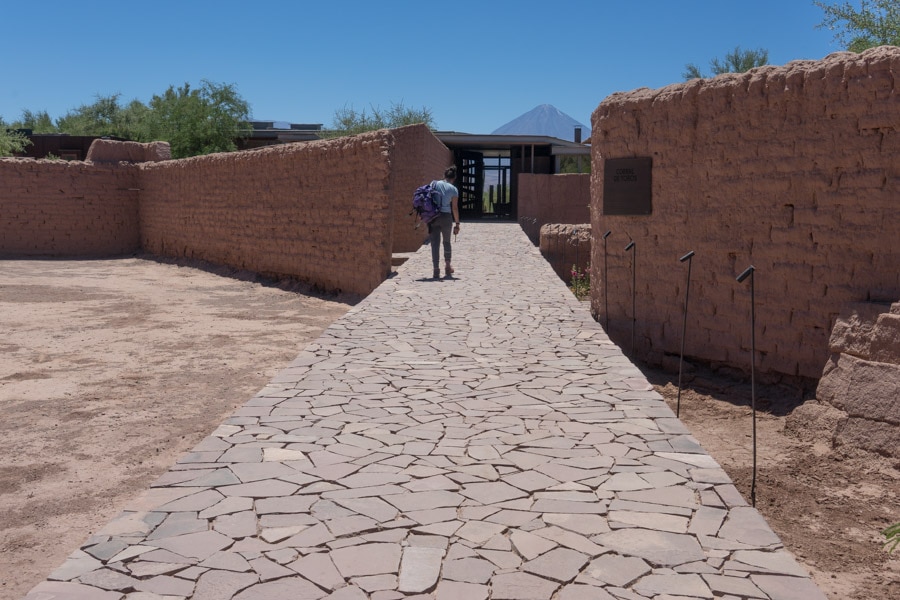 As the door closed behind me, I surveyed my new luxurious world. That plain faÃ§ade outside morphed into a big, beautiful, open space inside. Floor to ceiling windows with views of the Licancabur Volcano was the first thing I noticed. Lush green landscaping everywhere I looked. We had arrived at sunset, and the whole landscape in front of me was starting to glow pink. It was mesmerizing.

However I was soon brought out of my pink sunset haze when I was welcomed by staff who shuffled Juliana and me over to a table to sit down. A Pisco Sour and a cheese plate greeted us. We looked at each other in excitement as all memories of bad bus food disappeared and we settled into this new world of luxury in the Atacama Desert for 2 days.

The property originally served as a cattle corral, but Chilean landscape artist Teresa Moller transformed the grounds, preserving the ancient algarrobo and chaÃ±ar trees while restoring the adobe walls. Even though the whole building looked simple from the outside, the inside was like an oasis of luxury and landscaping. We stayed in a family room with a big balcony looking out on the desert and mountains; a real treat compared to the budget hotels we had been staying at in Argentina.

The entire property was a testament to local culture and tradition. Wherever possible local craftspeople were used in the construction and design. Adobe and local rock was utilized as an integral component of the design, and furniture and crafts were sourced from local artists. These are just some of the reasons why Tierra Atacama received the honor of being a National Geographic Unique Lodge of the World.

However one of my favorite local elements at Tierra was the program where the hotel hosts students from the local school for internships and training in hospitality. I met a number of them on our Atacama Desert tours and was so impressed with each of them.

Tierra Atacama isnât just another nice hotel, itâs an all inclusive experience. It not only includes all of your food and drink, but it also includes a variety of unique Atacama Desert Tours with the best guides in the region. Tierra offers an overall feeling of luxurious adventure.

So what exactly is a luxurious adventure? The whole premise of Tierra Atacama is to get outside and be active exploring this rugged high desert region, but then come back to a home base where you are pampered and can relax. I was used to the outdoor adventure part, but I wasnât used to the pampering part. However, I must admit it didnât take me long to get the hang of it. All inclusive drinks and incredible food â hell yes!

Valley of the Moon

Our guide Pamela met us in the lobby in the morning full of smiles. She had a beautiful Spanish accent to her English and she was full of energy; I knew right away this would be fun. She grew up in the region and was a wealth of knowledge about the local culture and history. We spent the morning touring around the Valley of the Moonâs unique landscapes, and caverns.

The valley is filled with a variety of rigid lunar-like landforms created from years of erosion and no precipitation. The landscape looked as if it had a little dusting of snow, which of course wasnât snow, but salt that had evaporated to the surface.

The âsnowâ wasnât the only surprise, the Atacama Desert is the driest place on earth; this means few things survive here. However life always finds a way to come through, and occasionally we would see a little pink bloom that Pamela told us was a Tikara flower.

After the morning walks and tour we arrived back to Tierra to a little luxury. Not only did we have a delicious lunch, but we also had a lesson in how to make pisco sours. Tierra Atacamaâs pisco sour is made with the Rica Rica plant found in the Atacama Desert. They infuse the pisco with it, giving it an herbal flavor.

Walking into the caverns

Hiking in the Valley of the Moon

Driving on the moon…

Atacama Desert is full of spectacular pink sunsets that light up the landscape, but one of the best places to go for sunset is Chaxa Lake and the Flamingos National Reserve. Pamela once again took us on our journey to Chaxa Lake located about 40 miles out of San Pedro. We first stopped in the little local community of Toconao to see the church, town square, and meet locals. After our short visit, we continued towards the lake driving on a road that felt as if it went on to infinity.

Itâs strange to see a lake in the middle of the salt flats, and itâs even stranger to see a lake full of pink flamingos. The flamingos feed on tiny shrimp that give them their pinkish hue. If you are lucky (like we were), there will be many flamingos in the lake and flying around; however, itâs not guaranteed. And this is definitely a place where youâll want a telephoto lens.

As the sun went down it was incredible to see and capture the changing colors on the surrounding mountains; a photographerâs dream. And when there were finally no more pictures to take, Pamela was waiting for us with cheese and fruit platter with drinks at the little shelter at the park. The luxury didnât stop there as there was dinner and bottomless wine waiting for us at the hotel when we returned.

Eating at the Chaxa Lake Buffet

What I thought was going to be a morning hike, turned into a full-fledged screaming fun adventure. Our Tierra guide took us to the Valley of Death to see and hike the dunes. The area actually used to be called Mars Valley, however the word Mars was close to the word death in Spanish, muerte, and over time became known as Death Valley instead. Death or Marsâ¦both seemed appropriate as I looked over the ledge onto the giant orange colored sand dune, jagged hills, and deep canyons. We hiked up the ridge and once again our guide gave us a geological background of the area. I thought weâd view the dunes and then continue to hike the ridge. Instead we took the fast way down â running down the dunes.

After a morning of playing in the sand, we came back to our luxurious swimming pool and spa and soaked up the view and some wine.

However I didnât get to rest long as I set out on an afternoon canyon hike trying to squeeze in the most adventures out of my time in Atacama. I headed out with guides Leo and Andrea for a hike in Guatin Canyon. I thought this was going to be simple hike through the bottom of a canyon on a relatively flat path and once again I realized my expectations were all wrong. It was a hike through a canyon, but it wasnât simple!

This was the first time I saw green in the Atacama Desert. The canyon was practically lush filled with Candelaria cacti that were hundreds of years old. We followed the river and skirted waterfalls; I wasnât expecting this in the desert! The hike itself was really challenging and was more or a scramble than a hike. We gingerly navigated narrow edges, crossed the river, and even scrambled behind a waterfall on a ledge. It was exhilarating and challenging. It was my favorite tour I did in Atacama. The best part was at the end of the 3 mile hike, Leo handed us a cold beer and snack before taking us back to the hotel for another decadent dinner.

My night didnât stop there. That evening after dinner we did a little star gazing tour. The unpolluted skies of the Atacama make it an exceptional place to stargaze. Native Atacaman, Cesar Anza taught us all about the constellations in the Southern Hemisphere, and helped us photograph the moon. He even took us into the observatory where we viewed planets and galaxies far far away.

My day of adventures finished up with a little luxurious desert and a Brandy by the outdoor fire. 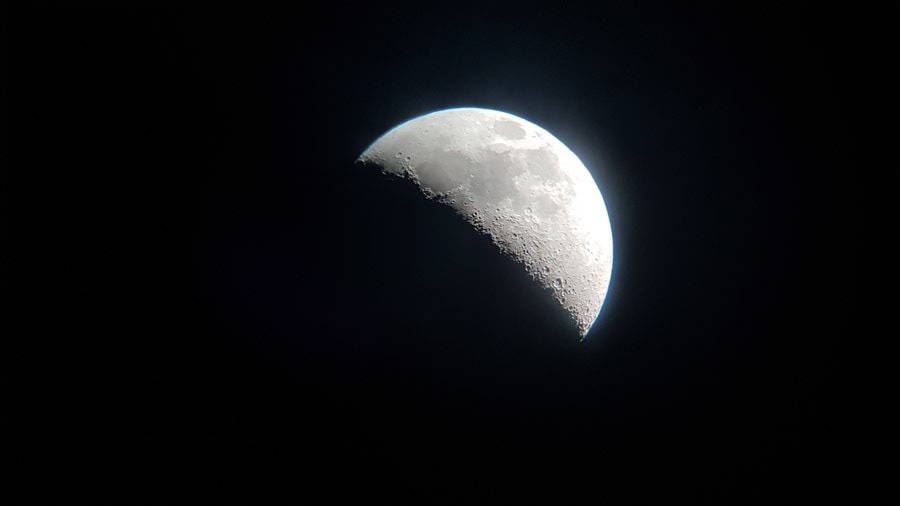 I stared at the mountains outside as I finished breakfast wondering how our time at Tierra Atacama went so fast? We packed a lot into just a couple of days in this vast region. All of our Tierra adventure guides had a deep cultural and historical knowledge of the area and an enthusiasm for the region, which is what made each excursion memorable to me. In addition to that, because we had small groups with private guides, we were able to go to places where big tours donât go, such as the Guatin Canyon hike.

As I said my goodbyes to the staff and the big wooden door closed behind me, I left my luxurious adventures behind. From now on, there would be no more bottomless drinks, cheese plates, incredible meals, personal drivers or talented guides to take care of me. Back to buses and cheap beer.

How you can Take Luxurious Adventures in the Atacama Desert

How to get there:Â  Closest airport is Calama Chile ( CJC) , or you can bus from Argentina or Bolivia

I was a guest of Tierra Atacama Hotel during my stay, however all opinions expressed here are my own.

One Response to "Luxurious adventures in the Atacama Desert"