How to Experience Holi 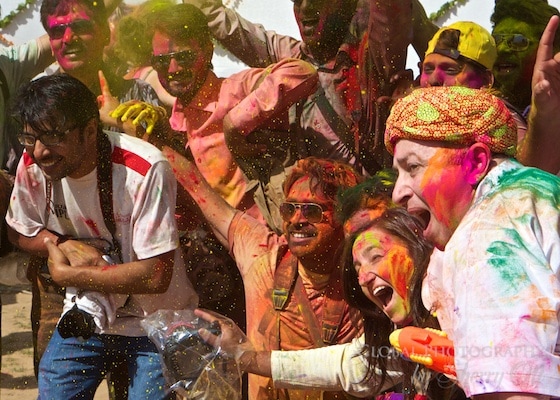 âHappy Holi!â the young girl said as we walked by her in the streets of Jaipur. Her colorful scarf trailed behind her as she walked by and smiled. Iâm not sure why I was surprised at this greeting, the Hindu festival of Holi was the main reason that I came to India early. Besides the pictures I had seen of people covered in colorful powder I actually knew very little about the festival. But I was about to get a very quick education. 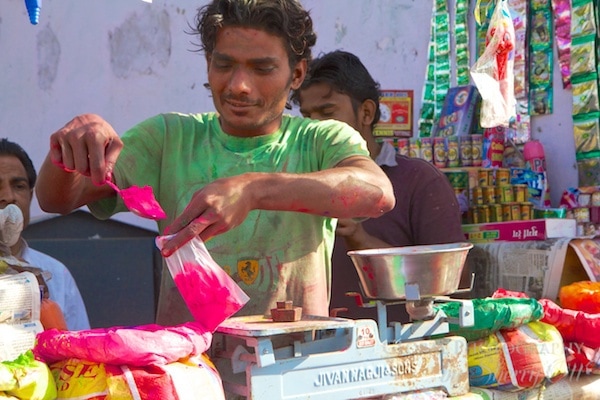 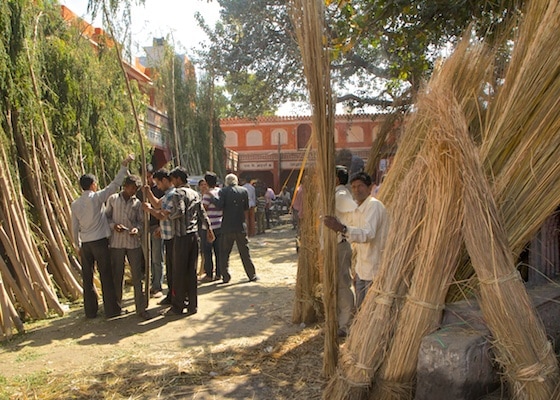 The day before Holi we went into the old city of Jaipur to look around. The streets were filled with vendors selling bright colored powder, balloons, and paper horns. There were also corners filled with tree limbs and bundles of dried grass with men bustling about picking up everything they needed for their communityâs Holika bonfire that evening. The general feeling on the streets were jovial as everyone greeted us and people bustled around getting their last minutes items they needed for the holiday. We were focused on getting our Holi clothes (aka cheap clothes that weâd wear once and throw away), baby wipes for trying to clean up gear and ourselves, and some additional duct tape for our cameras.

I couldnât help but compare it to my own culture and our Christmas holiday. âMerry Christmasâ and âHappy Holiâ had the same feeling to me in a way. The trees on display in Old Town were being bought up voraciously for the Holika bonfires – similar to our Christmas trees. I often like to compare a new cultural activity to something I know so that I can better understand what it may be like.

However the real story behind Holi goes like this,

âThe word “Holi” originates from “Holika”, the evil sister of demon king Hiranyakashipu. King Hiranyakashipu had earned a boon that made him virtually indestructible. The special powers blinded him, he grew arrogant, felt he was God, and demanded that everyone worship only him.
Hiranyakashipu’s own son, Prahlada, however, disagreed. He was and remained devoted to Vishnu.This infuriated Hiranyakashipu. He subjected Prahlada to cruel punishments, none of which affected the boy or his resolve to do what he thought was right. Finally, Holika – Prahlada’s evil aunt – tricked him into sitting on a pyre with her. Holika was wearing a cloak that made her immune to injury from fire, while Prahlada was not. As the fire roared, the cloak flew from Holika and encased Prahlada. Holika burned, Prahlada survived. Vishnu appeared and killed Hiranyakashipu. The bonfire is a reminder of the symbolic victory of good over evil, of Prahlada over Hiranyakashipu, of fire that burned Holika. The day after Holika bonfire is celebrated as Holi.â Via Wikipedia 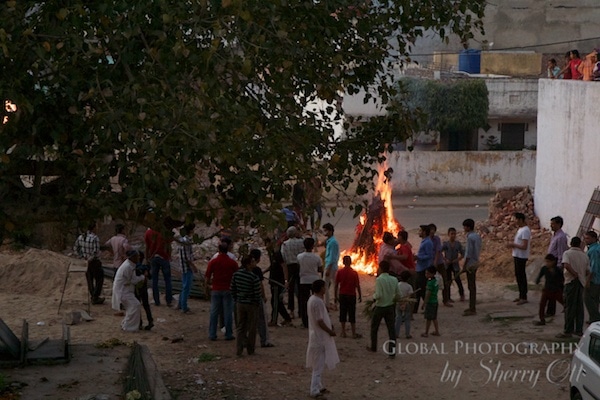 At sunset on the eve of Holi bonfires were lit in neighborhoods around the city signifying a symbolic victory of good over evil, Prahlada over Hiranyakashipu. We watched the locals carefully construct the fire and then light it as everyone let out a joyous yell watching the flames. Much like how the Olympic flame travels â so does the Holika flame from neighborhood to neighborhood. Men lit a smaller branch on fire and then walked it to the next fire to start. The bonfire is accompanied by singing and dancing and merriment. However in the neighborhood we were in, they celebrated with a rousing game of cricket late into the night. 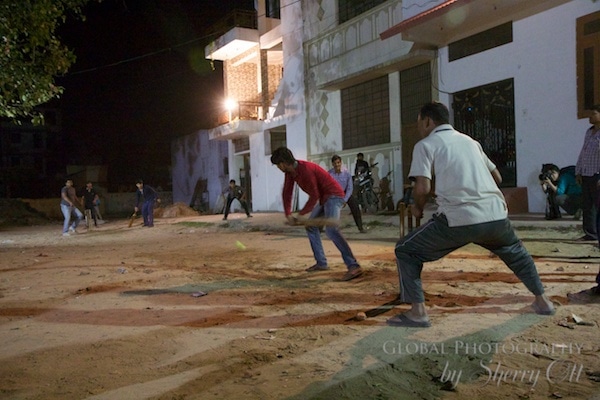 The next morning you get up early and the colors come out. People celebrate with their family members first. They spread color on peopleâs faces and body, which often ends up morphing into chasing each other, laughter and rowdiness. Then people tend to take to the streets drinking, singing, dancing and dousing people with color as they go by. No one is safe, it doesnât matter if you are friend or stranger, what age or nationality you are â you are a target of color.

One of my favorite things about Holi is the terminology that is used. The act of putting color on others is called âplaying Holiâ â of course this brings up visions of childhood and fun. I think it actually encapsulates the experience well.

We went to an event put on in the morning by the tourism department. It was a mixture of tourists of all ages and some local Indians associated with the tourism department and guides and their families. They supplied powder and various bands and traditional entertainment. I was a skeptical about the manufactured tourist Holi â but it had been put in place due to all of the safety concerns for tourists â specifically female tourists on the streets during Holi.

The tourism sponsored party was not my favorite but it really did give you an idea of what it was like as families and friends played Holi. Colors and powder flew everywhere as strangers became your friends and companions. After getting covered for a few hours, we left and went out to driving around the streets to see a more local look at Holi. Groups of friends convened on corners and often times in front of bars (which seemed to be the only thing open that day) to play. We hung our the car window and took pictures mainly but it was a good way to see it all in action at a safe distance form the drunken men. 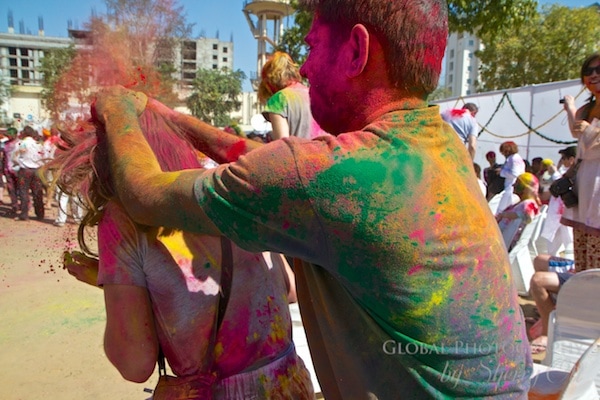 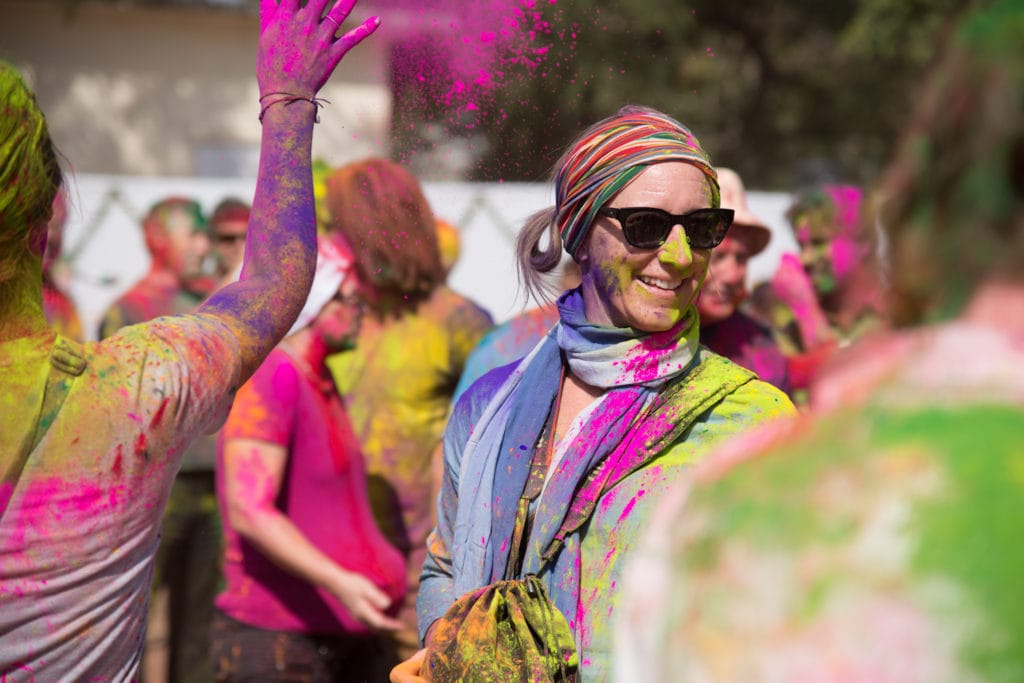 Me about to get doused in pink powder! 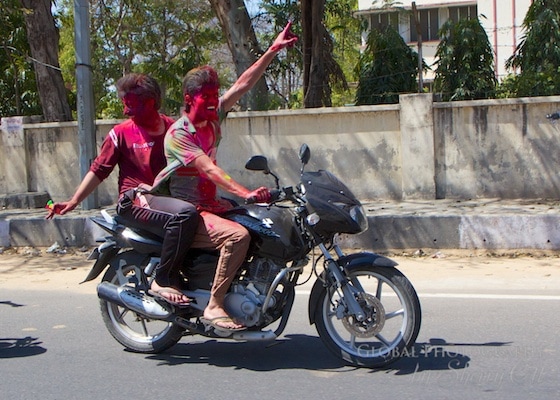 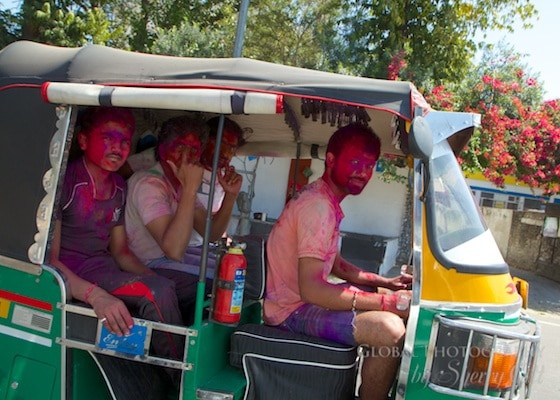 Our Jaipur guide Janu then took a bunch of us out to a local home to play which was my highlight. The colors seemed to get more vibrant as we went out of the city center. When we showed up at the home we were all greeted with powder rubbed on our face and then the playing began. It was sort of like a waterfight or food fight for young adults. (Iâm not really sure where I fit into that age groupâ¦but regardless I had a blast!). They mixed the bright colors with water which seemed to make them more permanent (thank good ness for the baby wipes!).

They brought out soda and some snacks when we were exhausted in the hot sun and we all had a chance to see our palette of colors we created on each other. 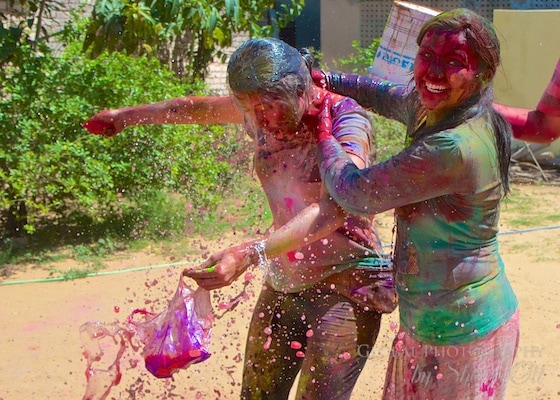 Playing Holi with the locals – and a little bit of water!

All I can say is plastic bags are your friends. If you must take stuff with you â put it in plastic bags if you want to protect it.

I saw all levels of protection when it came to cameras during Holi. I was most surprised when I saw people with DSLRâs with absolutely nothing at all to protect them. Granted the camera bodies are supposed to be sealed and no one was changing out lenses, but it would have taken a pretty thorough and time consuming detailing job to get it clean again. One man I talked to said he went to a gas station and simply used an air gun. 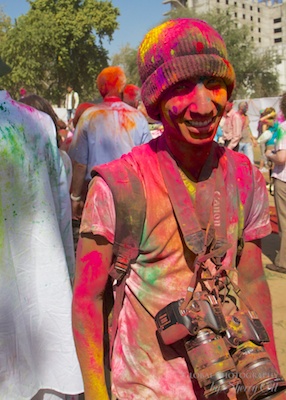 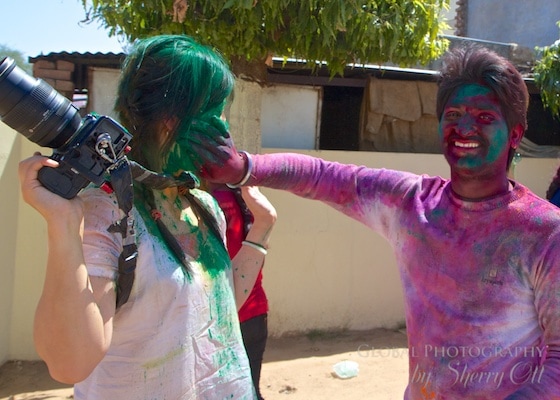 Playing Holi with a DSLR – daring but worth it. 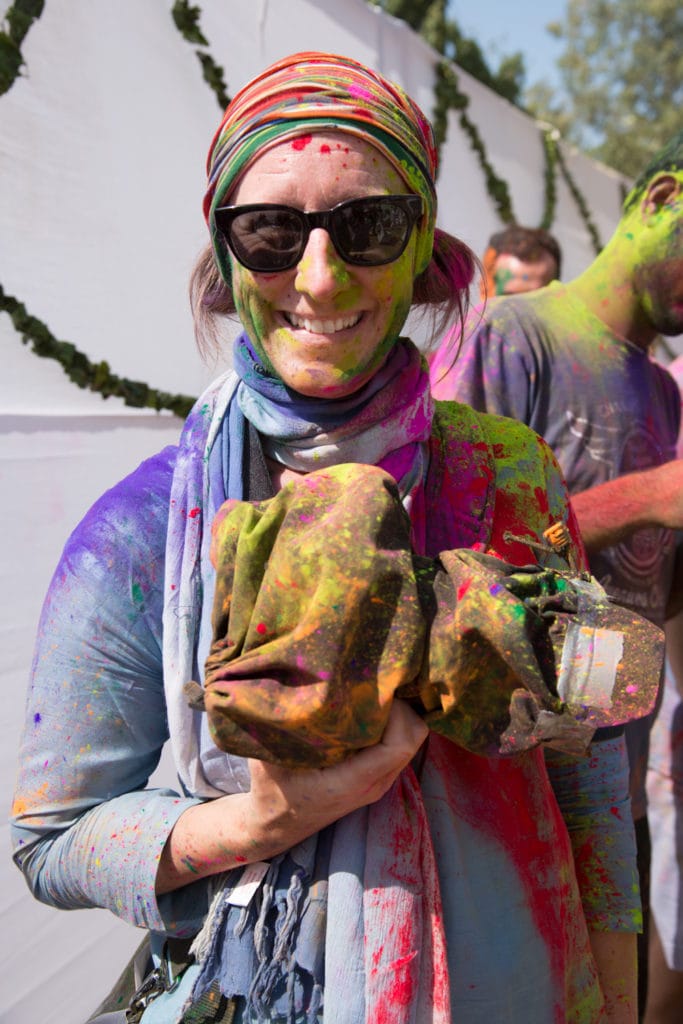 My camera safely tucked away in my RainCoat cover. The cover cleaned up easily after Holi.

I decided to use my LensCoat Raincoat to try to protect my camera which worked really well and was easy to wash out afterwards. However I took the extra precaution of securing the Raincoat to the lens hood with duct tape which allowed me to zoom the lens a bit easier without worry. Charlie simply used a plastic bag with duct tape so she could see her controls â but found it frustrating for zooming in and out and gave up on it after a while. She spent a lot more time cleaning her gear up than I did in the end.

One of my most frustrating things about Holi was the constant warnings about attending. I know they are meant as helpful, but there are only so many times you can hear about the horrors of Holi. I was warned over and over again to be careful, and donât go out and participate â so much so that I was getting frustrated about the whole experience. The warnings came from Facebook friends, India specialists, Indians, Jaipur shop keepers, and even the tourism department. I had read about the rowdiness and drinking that goes on at Holi with some of the men and boys who took liberties to grope western women during Holi. However, I didnât need to be warned over and over again as it had completely taken the joy out of it for me and changed it into a terrifying venture that had me second guessing 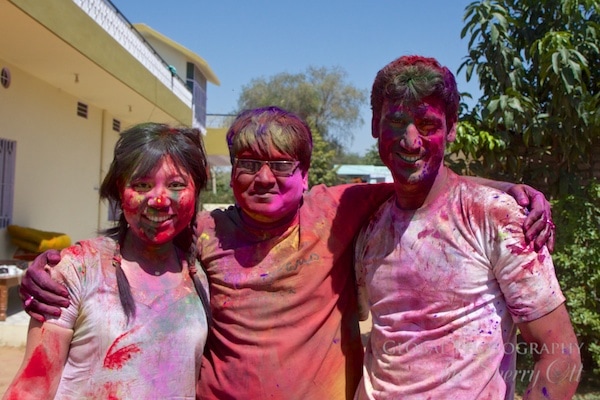 Charlie (on left) full of color!Â  Safe and sound. 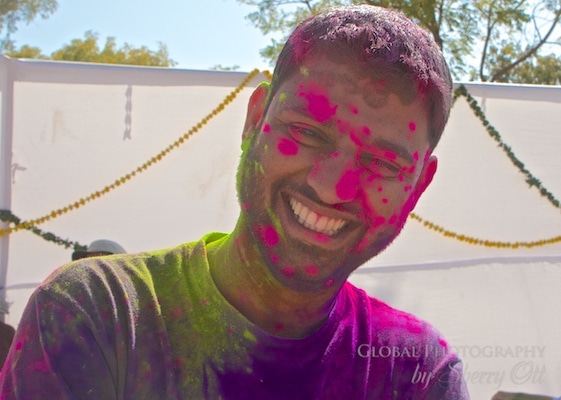 Janu – our guide to Holi in Jaipur

This is where itâs great to hire a local guide or go out with a local friend who understand the risks. Our Jaipur guide, Janu, (he can assist in touring all of Rajasthan) assured us that he would take us to the Holi celebrations in Jaipur and keep a close eye on us and he did just that. He was the one to arrange our local Holi experience too which was great. I could tell that he had briefed the young adults we were playing Holi with to be respectful. There was no alcohol involved either which was the key. We kept anything of value in his car and he also was available to drive us around to show us all of the partying.

After getting this first Holi under my belt â Iâm much better prepared for next time. And yes â there will be a next time! Happy Holi!

24 Responses to "How to Experience Holi"