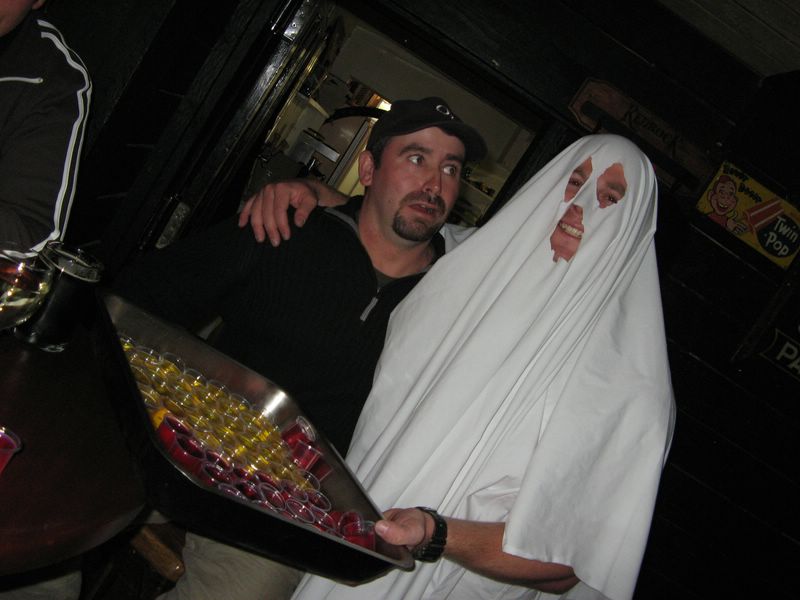 It was a long bus day today and a very full bus (I guess everyone wanted to get to Queenstown for Halloween). By now I had a group of ‘new friends’ that I enjoyed hanging out with from the Magic Bus so we all worked together to get our way through the long pushing group of passengers to get our packs loaded and get seats together on the bus. My New Yorker memories of crowded, pushy subways came rushing back to me – but this time I wasn’t wearing 3 inch heels so I was able to maneuver quickly in my tennis shoes – yet I looked like Jerry Seinfeld in my jeans and running shoes. However – I did used to be darn nimble in heels – and I haven’t worn them for a month now – my toes have never been so happy! We managed to all sit together and we were off once again! We drove through National Parks that surrounded Mt. Cook (the tallest mountain in New Zealand) – everything was so green and lush. I swear when they came up with the color green – they were thinking of New Zealand. The day was a mix of sun and clouds and generally the vistas out our windows were stunning. We had a number of quick stops for photo ops – so I was pretty happy about getting some good photos that weren’t taken out of a speeding bus window!

Oh – I forgot to mention – we had a new Magic driver, Trent. Trent seemed pretty laid back and chatty. I swear he was only looking at the road 50% of the time as he was mainly talking to the people in the front seat.

He mixed things up by having bus quizzes in which Jen (from Ireland) and I teamed up and won! I needed a good healthy competition to satisfy my competitive muscles once again! Do any of you know the difference between a Peninsula and a Cape??

One of our last stops of the day was at a bungy bridge. This was the first commercial bungy jump ever…in essence – the birthplace of bungy. I knew that I was in no mood to bungy after my abseiling adventure in South Africa – so I happily played the part of photographer. Gavin, from Long Island, decided to try it. I have to admit – it looked like fun – but the thought of being dipped in freezing cold river water below sounded terrible. Isn’t it bad enough that you are jumping off a bridge hoping that they bungy cord works and then you have to land in the freezing river…oh yeah…and pay for the enjoyment of it all…no thanks…I’ll stick to jumping out of planes with hot men strapped on my back!
Gavin survived…

We arrived in Queenstown and it completely reminded me of an adorable little ski town in Colorado. It had a little bit of everything – snow covered mountains (The Remarkables – not to be confused with moved the Incredibles), a massive lake, green hills, and a great little main street full of bars and restaurants. This was the home of adventure and it was Halloween – we were bound to have a great time! None of us had costumes, but we were hungry and thirsty. A large group of us – Jen, Graeme, Bill, Nick, Alistair, and Jordy went to the famous Fergberger. I have no idea who Ferg is/was – but word on the street was that they had the best burgers on the South Island. After days of meals of PB&J, I was ready for some meat! The burgers were superb!

They were huge – the size of a dessert plate. Mission accomplished – the base of food was now established – now it was time to party.

I think I was so excited to get cleaned up and put my best ‘going out’ shirt on (basically something that wasn’t dri-fit material) and shoes that weren’t tennis shoes – I was in a party mood. I remembered one of the last days that I was in NYC I was walking down Columbus St. with my dad and he said “Do you think you’ll miss this?”
“I don’t think so” I said.
He went on to say “I think you’ll miss getting dressed up and going out – the glamorous, social side of NYC.”
I hate to admit it – but my Dad was right. So this was my night on the town and I was ready to hit it – never mind that ‘the town’ was 3 blocks long!

We went and met our driver, Trent, out at the Red Rock Bar. Trent promised us free drinks and shots – so being budget minded we headed there first. Trent was true to his word – he came in a sheet as a ghost and he came bearing jello shots…jello shots have a gravitational pull on me – so this could be dangerous. Graeme and I got into a big debate about the term Jello vs. Jelly. He called them Jelly shots which sounded horrible to me. Potato – potato (I guess that point doesn’t really come through to well in type – oh well – you get what I mean). After more brightly colored free shots from Trent we moved on to another bar – one that served their drinks in tea pots – what a great gimmick.

The Brits were in heaven with their ‘tea’. The fun continued to the local dance club and then home for a good drunken sleep on a bunk bed! The whole night to me felt like old times – it felt good to be out on the (small) town hanging out with new, interesting, fun people. I felt normal again. Despite our different nationalities and many heated conversations about jelly vs. jello, jelly vs. jam, what makes up the contents of a sandwich (the Brits couldn’t stomach the idea of PB&J – so I told them to take their Marmite and go home) we had discovered that we all had a few things in common. Travel, adventure, drinking, and an outgoing attitude. For all of you San Franciscans reading this – if you see a vivacious Irish, redhead in San Francisco wandering around – it’s Jen – buy her a beer. For you New Yorkers – look out for Alistair. He is coming to town around Thanksgiving – lets hope he doesn’t get escorted back to his Madison Square Garden hostel by the NYPD! I really enjoyed all of my ‘new friends’ from backpacking New Zealand. The hardest part is watching them leave your world as easily as they entered it.